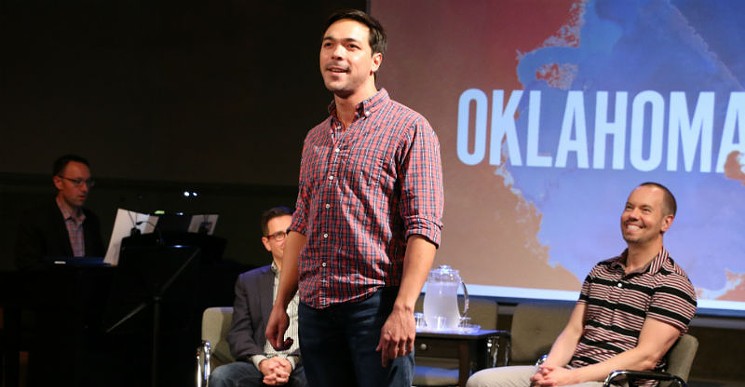 Sam Simahk performing at TUTS Spotlight
Photo by Rebecca Hopp
If there was one thing Sam Simahk knew, he'd never be cast as Curly in that most white American of musicals, Oklahoma!

But he went to the New York City auditions anyway and was selected for the lead role in the Theatre Under the Stars production about to come to the Hobby Center. "I'm half Asian American. My dad's from Thailand." He says he never knew Oklahoma! very well, other than some of its famous songs, because he assumed he would never be in it. "I always thought it would be the one of the last holdouts in colorblind casting.

But, he acknowledges, "The industry's been changing rapidly. Things certainly have changed in the last few years."

To prepare for the role he listened to the London revival with Hugh Jackman. "I fell in love with it. I just think it's such a sweet and deceptively simple show that has a lot of heart and tells a great story of this community coming together. It's a show about a picnic, but really it's so much more than that."

Unlike shows that came before it which pieced together trunk songs and then wrote a show around them, Simahk says "Oklahoma! was the first time songs were written for these characters in these circumstances in this town and how they're dealing with the problems that face them in their day to day lives. It is the piece that shifted musical theater towards what it is today."

Also unlike many other Westerns of the time with their all-good good guys and all-bad bad guys, Oklahoma! has always had more nuance. Curly is the good guy lead except when he goes to speak to bad guy Judd at his smokehouse, he half-jokingly suggests that Jud should kill himself. "And that's not something that is very heroic," Simahk says. "In today's society we would look at Judd and say he’s depressed and has some mental illness. But at the turn of the century in the Oklahoma territories they don't have that sort of vernacular.

Then, of course, audiences are drawn in just to hear the Rodgers and Hammerstein songs which include:  "People Will Say We're in Love," "Oh What a Beautiful Morning," "The Surrey With the Fringe on Top," and "Oklahoma." And the classic: "Pore Jud is Dead."

Simahk says he was always a dramatic kid, always a musical kid growing up in Massachusetts. His mother enrolled him in a drama summer camp in second grade and by the time he was in high school he was doing every show he could audition for and going down to New York City in his sophomore year.

Again he sees real change in what theaters are willing to do today in terms of casting.

"I think that a lot of theaters are taking it upon themselves to help the country move forward.  I am half Asian. Externally I might not seem like much of a cowboy, but on my mother's side, my great-uncle, he rode bucking broncos. My cousins live in West Texas and they're cattle ropers. I come from backwoods in Massachusetts hunters and fishermen and I'm a folksy redneck at heart."

"Everybody has their idea of what Oklahoma! is and what it can be and I think that we give people that show and then we might surprise you with our interpretation of the show."

Performances are scheduled September 11-23 at 7:30 p.m Tuesdays through Thursdays and Sundays, 8 p.m. Fridays and Saturdays and 2 p.m. Saturdays and Sundays at the Hobby Center, 800 Bagby. For information, call 713-558-8887 or visit tuts.com. $30 - $104.50.
KEEP THE HOUSTON PRESS FREE... Since we started the Houston Press, it has been defined as the free, independent voice of Houston, and we'd like to keep it that way. With local media under siege, it's more important than ever for us to rally support behind funding our local journalism. You can help by participating in our "I Support" program, allowing us to keep offering readers access to our incisive coverage of local news, food and culture with no paywalls.
Make a one-time donation today for as little as $1.