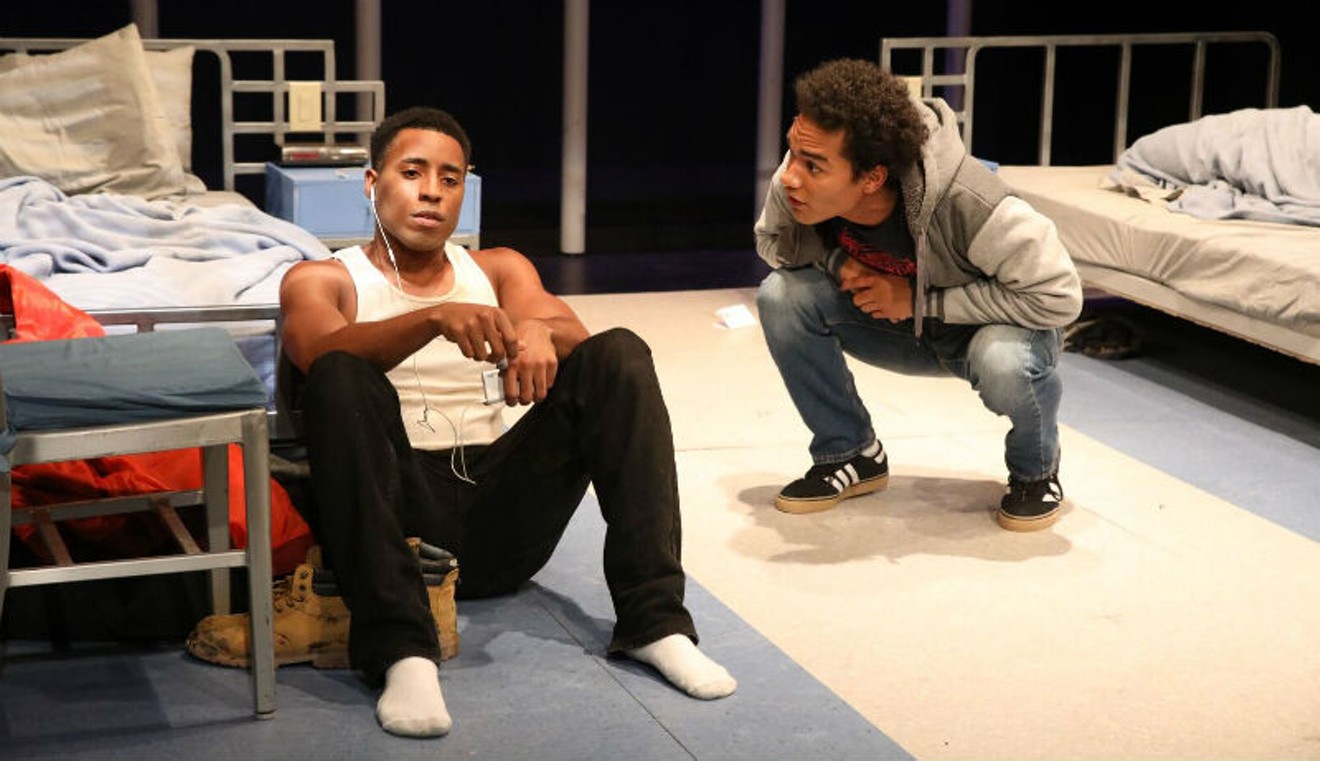 Playwright Emilio Rodriguez was living in Los Angeles, on his way to a club with some friends in 2011, when they passed by a shelter that he discovered was for LGBT kids. "At the time I had no idea that LGBT shelters existed."

As he came to find out, a frequent problem is not enough beds at shelters like this, not enough anyway to keep up with the rising number of kids who've been kicked out or can't get any support from their families.

He decided he wanted to write a play about this, an enterprise that was years in the making as he juggled jobs as an actor with his writing and learned more about the lives of kids in such shelters. He moved to Detroit where he started working as a volunteer in an LGBT homeless shelter. "That's when the writing really started taking place," he says.

Then he found out two friends had lived in LGBT shelters when they were younger. "That was really helpful as a resource to know what actually happened in the shelters." "The voices of the characters really came to me." The result is Swimming While Drowning  about to make its debut at Stages Repertory Theatre.

The one-act, 90-minute play directed by Alice Gatling (who directed We Are Proud to Present* so successfully last season at Stages) has just two characters: Angelo (played by Reginald Choyce) and Mila (Andrew Jackson III) both 15 and homeless, thrown together in a Los Angeles shelter. Mila is a hustler, who's survived on the streets while Angelo is a dreamer. Angelo has left his home; his father is homophobic.

Besides the fact that these are two teenagers working through their sexual orientation and the way the world responds to them, just their being teenagers adds layers to the whole play. Rodriguez also worked as a Teach For America teacher working with sophomores and that influenced him as well, he says.

"Most 15-year-olds are not able to drive — not that kids in this sort of shelter would have access to that anyway — but most of the 15-year-olds that I taught have this sort of feeling of being invisible because they're not old enough, not mature enough to be driving and going out and thinking about colleges and ready to be an adult, but they're in that weird gap that they’re not looked out for in the same way that younger age range is. I thought it was a really interesting character, place and an interesting comment on society about people who are really made to feel invisible."

Enter University of Houston professor Trevor Boffone, who sometimes writes for the Houston Press and is the founder of the 50 Playwrights Project and a board member of the National Steering Committee for the Latina/o Theatre Commons "A mentor of mine, Trevor Boffone, he had submitted the script they had an opening and they reached out to me."

"The final moments of this play are as theatrical, magical and moving as any I have experienced in years." — Stages Artistic Director Kenn McLaughlin


Stages Artistic Director Kenn McLaughlin jumped at the chance to present it. and in a Stages press release was quoted as saying:  “Swimming While Drowning is one of the most simple and beautiful stories we'll tell this year. It covers a host of issues but at its core it is about how we develop our sense of self and how fragile the world can be for a teenager. It is also a play about resilience and the healing power of authentic friendship. Emilio finds remarkable poetry by crafting complicated, authentic, teen characters whose struggles are at once universal and very specific. The final moments of this play are as theatrical, magical and moving as any I have experienced in years. I can't wait to share this stunning play with our audiences.”

In a posting on the National New Play Network, Buffone writes that he has taught this play in his classes and in fact did a staged reading. "It's sweet. It's tender. It's poignant. It's also really funny. More importantly, stories about LGBT youth of color are often untold or go unnoticed. Theatre such as 'Swimming While Drowning' can open up people's eyes and hearts. ”

Performances of Swimming While Drowning are scheduled for October 3-21 at 7:30 p.m. Wednesdays and Thursdays, 8 p.m. Fridays and Saturdays and 2:30 p.m. Saturdays and Sundays at Stages Repertory Theater, 3201 Allen Parkway. For information, call 713-527-0123 or visit stagestheatre.com. $25-$55.
KEEP THE HOUSTON PRESS FREE... Since we started the Houston Press, it has been defined as the free, independent voice of Houston, and we'd like to keep it that way. With local media under siege, it's more important than ever for us to rally support behind funding our local journalism. You can help by participating in our "I Support" program, allowing us to keep offering readers access to our incisive coverage of local news, food and culture with no paywalls.
Make a one-time donation today for as little as $1.