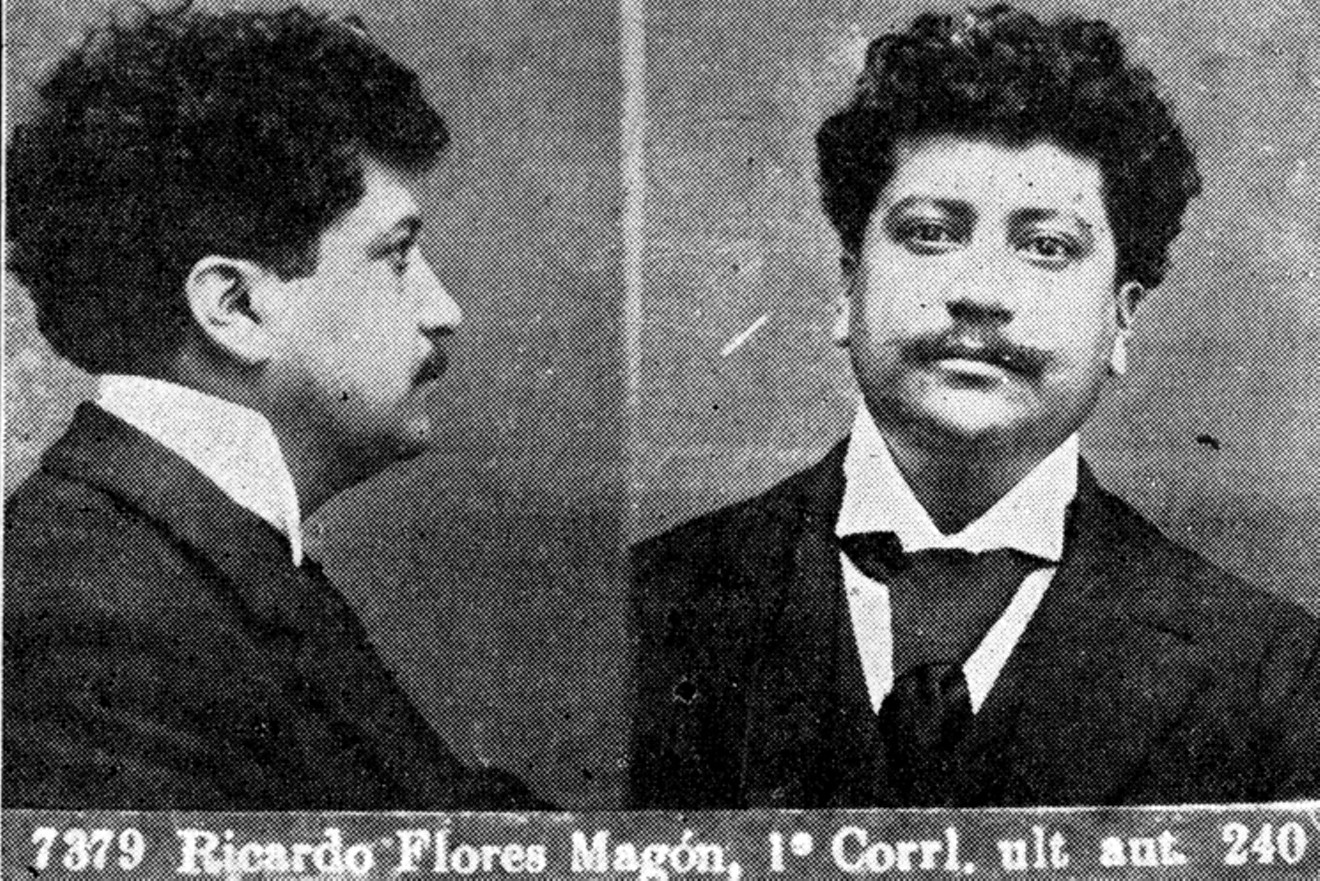 Mugshot of Ricardo Flores Magón, ca. 1903. Public domain
No, the titular group of this book aren’t the “Bad Hombres” that a certain former U.S. President fretted about. Rather, they were the malos mexicanos dubbed so by their own countrymen who were supporters of (given how one believed) the great leader or despotic dictator, Mexican President Porfirio Díaz, who by 1910 had already been in power for over a quarter century even as he was pushing 80 years old. Book cover
And while he started off as a brilliant military strategist before assuming power, Díaz’s administration and his appointed officials quickly wallowed into the Usual Suspects of corruption, cronyism, and brutal putting down of any enemies, real or perceived.

That Díaz was the legitimate hero of the 1862 Battle of Puebla, which liberated Mexico from France (it’s what is actually celebrated on Cinco de Mayo outside of mass tequila consumption) and started off as a liberal, was quite the dichotomy.

In addition to the government’s treatment of the working class and intellectuals, what really angered these “bad Mexicans” was Diaz and the country’s far-too-cozy relationship with the Americans to the north.

Eager for Yankee investment dollars and even welcoming imperialist influence, Mexico was seen by rich men to the north as a source of cheap land, cheap labor, and lax rules to increase business and political directives (see: Rockefellers, Guggenheims, Hearsts, and more).

But for a group of crusading journalists, political activists, soldiers, and common workers, that would not stand.

In Bad Mexicans: Race, Empire, and Revolution in the Borderlands (384 pp., $30. W. W. Norton), historian Kelly Lytle Hernández offers a brilliant, impeccably-researched, and engaging history of the lead up to the Mexican Revolution, whose impact on trade, immigration and international relations reverberates and impacts so many things even more than a century later. Mexican President Porfirio Díaz, ca. 1911.
Public domain
In his Presidency, Díaz may have brought order and progress to Mexico, but often with the use of rigged elections, bendable laws and killing squads. An “honorable tyranny,” sometimes practiced in conjunction with the U.S. too happy to enforce the “Juan Crow” laws aimed at suppressing any thought of Mexicans in the United States starting a revolution in their homeland.

At one point, while Blacks and Anglos could emigrate to the U.S. from just about anywhere, Mexicans and Chinese were barred.

With the pacing of an adventurous spy novel, Hernández tracks the malos Mexicanos around Mexico, into Laredo and San Antonio in Texas, St. Louis, and even Canada as they try to stay one step ahead of U.S. pursuers while fomenting a revolution in their homeland.

The work of kickstarting a revolution was largely through the activities of the political party PLM (Partido Liberal Mexicano), their La Junta army, cells of focos, and the underground newspaper Regeneración, which as one point had 200,000 subscribers in two countries but was still carried about like contraband.

Of all the bad Mexicans Hernández tells the stories of like Antonio Villareal, Librado Rivera, Manuel Sarabia and Jovita Idar, one gets more and prominence: Ricardo Flores Magón. So important a leader to the cause he was, the phrase “magónista” was often used interchangeably with “revolutionary.”

He stayed on the run for over a year—avoiding even a close kidnapping plot—before being captured and going through lengthy appeals while in prison. Hernández makes Magón the book’s central figure, though he was hardly without critics even within the movement itself. Author Kelly Lytle Hernández.
Photo by Sebastian Hernández
Magón was subjected to harassment, undue process of law and the illegal opening and copying of mail, in cahoots with U.S. and Mexican authorities and a private detective firm.

Hernández’s history lesson also says much about freedom of speech, journalistic suppression, and trumped up charges for acts done in the name of politics, not the violent banditry officials claimed they were.

Houston appears in the narrative at the site of a daring escape by Práxedo Guerrero, one of the resistance’s most dashing leaders who was not afraid to use both words and action to achieve revolutionary goals.

In 1910, he was hiding out in Houston’s Hotel Louisiana when U.S. agents found him, kicking in the door to his room. Thinking fast, he fastened two bedsheets together and scaled out a third story window—crashing to the ground.

Injured, he still escaped, though perished later during one of the opening battles of the Mexican Revolution.

All of these “bad Mexicans” set the stage for the revolution started in 1910 and would rage for years. With the names of fighters like Emiliano Zapata and Pancho Villa being the only ones that most Americans today would recognize whether from a history book or a Hollywoodization movie.

With Bad Mexicans, Hernández has done an amazing service to historical narrative at a woefully undertaught subject of the Mexican Revolution. Something more Americans—and especially Texans—should know about.
KEEP THE HOUSTON PRESS FREE... Since we started the Houston Press, it has been defined as the free, independent voice of Houston, and we'd like to keep it that way. With local media under siege, it's more important than ever for us to rally support behind funding our local journalism. You can help by participating in our "I Support" program, allowing us to keep offering readers access to our incisive coverage of local news, food and culture with no paywalls.
Make a one-time donation today for as little as $1.