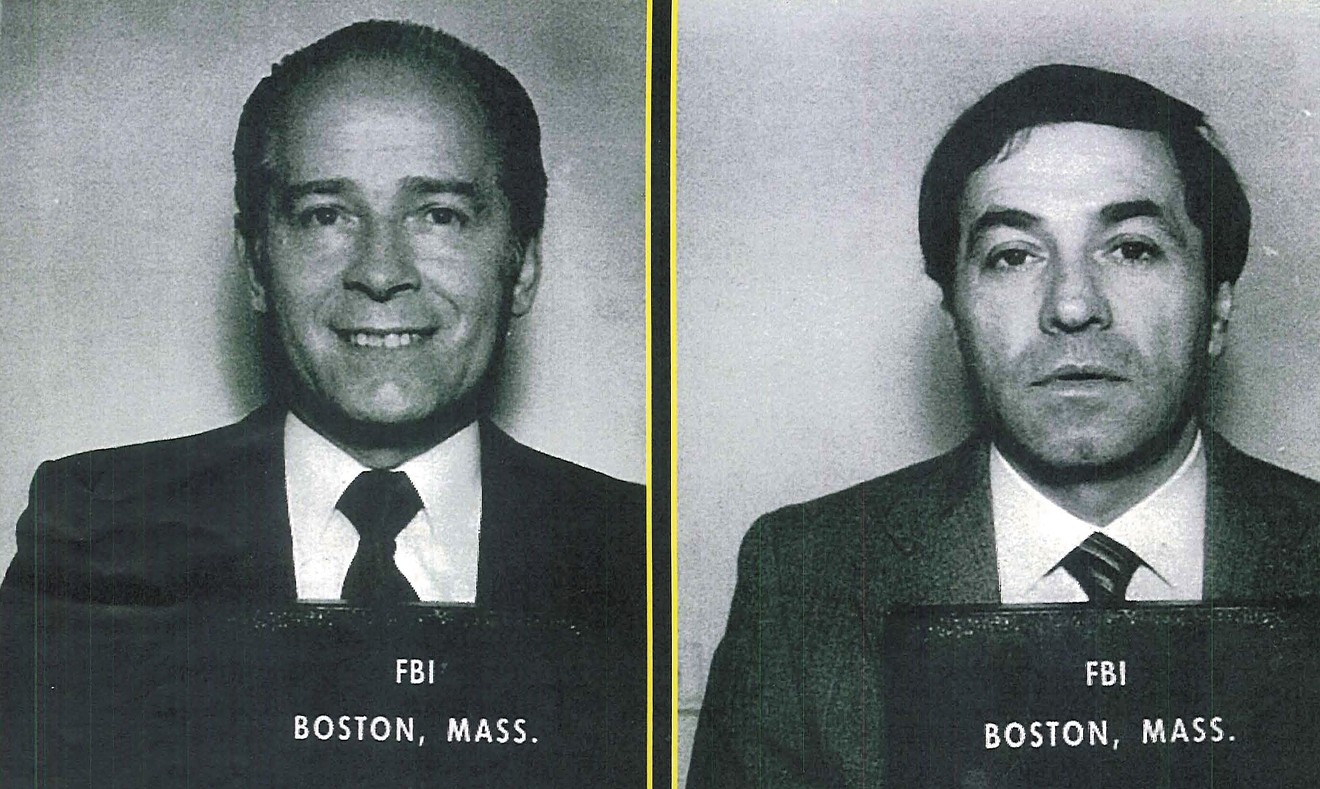 FBI mugshots of Whitey Bulger and criminal associate Steve Flemmi taken in 1983 when they were suspects in the 1982 murder of former World Jai Alai president John B. Callahan in Miami. United States Attorney evidence photo/Courtesy of William Morrow
Hunting Whitey: The Inside Story of the Capture & Killing of America’s Most Wanted Crime Boss
By Casey Sherman and Dave Wedge
352 pp.
William Morrow
$28.99

Late in the evening on May 1, 2011, President Barack Obama announced to the world that terrorist leader Osama Bin Laden had been killed by U.S. forces while hiding out in Pakistan. It’s probably safe to say that a majority of Americans were pleased by the news, but one man was decidedly not: James “Whitey” Bulger.

Book cover
That’s because the death of the man who had replaced him as No. 1 on the FBI’s Most Wanted List meant that Bulger was now reinstated in his ranking – with all the attendant scrutiny that would entail. Not good news for the octogenarian fugitive.

The well-known Irish mobster’s life of crime extended decades prior. And as the leader of Boston’s notorious Winter Hill Gang, Bulger was involved with a laundry list of crimes both petty and major, ultimately leading to charges of personally committing or being involved with 19 murders.

Not revealed until later was that Bulger was providing information for years to since-disgraced FBI contacts who would in turn provide Bulger with information that either protected him or could damage his enemies. So while he claimed to despise “rats,” Bulger saw no incongruity in his own actions. And when the heat got too scorching in late 1994, Bulger and girlfriend Catherine Grieg simply disappeared.

For 16 years, the pair traveled and lived in Florida, Louisiana, and California under assumed identities. All the while, they interacted cautiously with locals, who saw them only as a nice but slightly eccentric retired couple with a fierce love of dogs and dog owners (a connection that would eventually help authorities find them). The couple were captured and 2011, and Bulger’s trial led to guilty verdicts and imprisonment in 2013.

The established Boston-based writing team of Casey Sherman and Dave Wedge conducted dozens of interviews and plowed through an archive’s worth of reports, documents, and letters from those on both sides of the case. And their narrative flows with a sharp storytelling edge.

Hunting Whitey actually breaks new ground many times with its revelations about Bulger’s post-crime life put in print for the first time. The authors even get Bulger's brother William — who served as a longtime member of the Massachusetts State Senate and President of the University of Massachusetts — to speak on the record about the sibling he was long accused of protecting.

Whitey is buried here with his parents, Mary and John, in a Boston cemetery. Whitey’s name is not on the grave.
Photo by Casey Sherman and Dave Wedge/Courtesy of William Morrow
And while Bulger’s orbit of criminals, killers, and women appear here, Sherman and Wedge give greater space to the local, state, and federal law enforcement officers, agents, and prosecutors whose work, skill, and sometimes dumb luck, led to Whitey’s ultimate capture. And of them all, the authors give their biggest spotlight to FBI Special Agent Noreen Gleason, whose tenacity led the investigation and who broke the case partially by focusing on searching for Grieg and not Bulger.

That’s even when some of their own co-workers stymied the process on purpose, either to protect Bulger or their own involvement. Investigations in the United States, Canada, and  Mexico resulted in dead ends.

Many of these officers and agents were new to the case and are credited with trying fresh alternatives to find the couple, including putting the focus on Grieg. The authors also give voice to relatives of Whitey’s victims, their anger still raw many years after the act that took their loved one.

Hollywood has also been fascinated with Bulger’s life and career. The Jack Nicholson character in Martin Scorsese’s The Departed (2006) was based on Bulger, and Johnny Depp played the man himself in Black Mass (2015).

In one of the books’ more tantalizing revelations, two officers were convinced that an elderly man in a hat they saw watching and laughing knowingly at a sparsely-attended screening of The Departed was Bulger himself, but who slipped away before they could make a move.

Bulger’s end came as something of a shock all around in 2018 when the 89-year-old was beaten to death in his own cell bed by two beefy inmates with their own motivations less than 24 hours after being transferred to a new prison. How and why he was sent to the ill-suited facility in his extremely poor health condition, among known enemies, with a head-scratching lack of supervision on such a high-profile prisoner could be the subject of its own conspiracy theory-laden book.

Hunting Whitey neatly ties up the story of the storied criminal whose legend loomed large in South Boston and around New England for decades. And shows how a brutal man could meet a brutal end, even among his own kind.
KEEP THE HOUSTON PRESS FREE... Since we started the Houston Press, it has been defined as the free, independent voice of Houston, and we'd like to keep it that way. With local media under siege, it's more important than ever for us to rally support behind funding our local journalism. You can help by participating in our "I Support" program, allowing us to keep offering readers access to our incisive coverage of local news, food and culture with no paywalls.
Make a one-time donation today for as little as $1.