A Jazz Age Life of Booze, Broads, and Big Wads of Cash. And Murder. If one was playing “$20,000 Pyramid” and the clues to the identity of a person where the words “Bootlegger,” “Prohibition,” “Flashy,” “Gangster” and “Midwest,” most people would probably guess “Al Capone.” But another figure of the 1920’s ran a bigger booze empire – and whose life took and even more bizarre twist – and that was George Remus.

By any yardstick, Remus was an accomplished man. A German immigrant possessed of a deep work ethic, he became an optometrist, and then a licensed druggist, owning two pharmacies by the time he was 21. He was also an accomplished athlete, swimming 10 mile lake races at the age of 30 against men a decade younger.

Looking for another challenge, he went to law school and became one of Chicago’s preeminent criminal defense attorneys, albeit one known for his often over-the-top courtroom theatrics. He once drank from a bottle of poison to the gasps of a jury to “prove” that a client could not have committed a crime. But using his knowledge as a pharmacist, he had taken the antidote beforehand.

However, when he saw his bootlegger clients seemingly swimming in money and paying off court fines with fat wads of cash, George Remus decided to become a bootlegger himself. Moving to Cincinnati, he established an elaborate and wide-spread operation of distilleries, transportation avenues, and customers.

He made sure to spread large amounts of cash around the right people in government and law enforcement to look the other way (including the U.S. Attorney General Harry Daugherty). They money was delivered by his gun-toting henchmen. Things were also smoothed as Remus was in possession of many legitimate (and fake) “whiskey certificates” in which the United States allowed the making of the liquor for medicinal purposes only.

But Remus and his second wife Imogene – who he romanced while married to his first wife – were hardly shrinking violets. The bon vivants lived an opulent life of luxury and material consumption, throwing massive parties in their huge mansion and peacocking in their success. And the press loved it.

Federal agents finally caught up with “The King of the Bootleggers,” and he spent 2 ½ years in prison. Leading the charge was Mary Walker Willebrandt, a pioneering assistant attorney general who fenced not only with Remus, but with sexist attitudes about powerful women at the time. 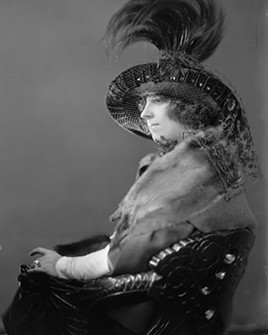 Imogene Remus sits for a formal portrait. This photo was take shortly after she and George were married in June, 1920.
Courtesy George Remus Historical Files, Price Hill Historical Society, Cincinnati, Ohio
In a jolting twist, the supposed loving wife that he left in charge of all his business affairs had her own affair with a corrupt federal Prohibition agent, Franklin Dodge. The illicit lovebirds burned through Remus’ money, plundered the mansion of all valuables, drained bank accounts, and even hatched plots to both have Remus deported and/or assassinated upon his release when the affair became public. Remus’ business partners also showed no concern about settling their debts to an incarcerated man, as other gangsters moved in on his territory.

It all came to a head on October 6, 1927 when Imogene and her daughter were on their way to a courthouse to finalize divorce proceedings. Furious at being cuckolded and betrayed, George chased them in another car, was able to pull Imogene from hers, and shot her point blank in the stomach, killing her. And in one of the most sensational trials of the time, Remus – acting as one of his own lawyers – was set free. His defense? “Temporary maniacal insanity.”

The Bourbon King is of two books on the subject to come out at the same time (though Karen Abbott’s The Ghosts of Eden Park reportedly focuses more on Imogene and the murder trial). Here, Batchelor does a masterful job of historical journalism using archival resources to paint a picture of the man and his time.

Remus – who often referred to himself in the third person – comes across as a bigger-than-life force of nature, though not necessarily the “evil genius” of the title. Batchelor’s prose also tends to turn purple at points throughout the narrative.

But The Bourbon King is a compelling Jazz Age tale that mixes in crime, booze, gangsters, and lust, but also notes how ambition, intellect, and quest for The American Dream built one man’s empire, and then how it all came crashing down around him.
KEEP THE HOUSTON PRESS FREE... Since we started the Houston Press, it has been defined as the free, independent voice of Houston, and we'd like to keep it that way. With local media under siege, it's more important than ever for us to rally support behind funding our local journalism. You can help by participating in our "I Support" program, allowing us to keep offering readers access to our incisive coverage of local news, food and culture with no paywalls.
Make a one-time donation today for as little as $1.