"Reality Bites"—filmed partially in Houston—was a pivotal movie for Gen X and 1990s culture. Screen grab
To his admirers, Chuck Klosterman is one of today’s most trenchant, incisive and often very funny pop culture critics and historians. Readers devour his books and essay collections like Fargo Rock City and Sex, Drugs and Cocoa Puffs. Others can find him too-hip-for-thou. 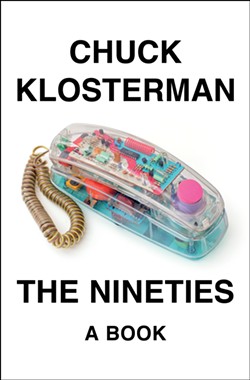 Book cover
Regardless, his newest effort—the straightforwardly-titled, The Nineties: A Book (384 pp., $28, Penguin Press)—is simultaneously a deep and light sprint through the decade that doesn’t just namecheck people and bands and movies, but burrows under as to why they were important then. And what that means today.

“The decade was heavily mediated and certainly self-conscious, but not skewed and misshapen by the internet and social media,” Klosterman writes in the book’s introduction. “Now, the 1990s seem like a period when the world was starting to go crazy, but not so crazy that it was unmanageable and irreparable.”

Klosterman starts out trying to define what the decade meant to the group of which he’s also a member, Generation X. That’s those born roughly between 1966 and 1981 (though, admittedly, those born on the pole ends of that time frame would have radically different pop culture/social/news experiences).

He notes that in the nearly-defining film Reality Bites (a good chunk of which was filmed in Houston), Winona Ryder’s indecisive, moderately talented documentary filmmaker ends up romantic partnering not with the well-dressed Ben Stiller executive character who loves, values and admires her, but with the feckless, dirty, misogynistic, insulting lazy shithead Ethan Hawke character.

Why? Because in ‘90s terms, Hawke was “real” and “true to himself,” spouting seemingly deep life philosophies and was—above all—not a “sell out” (if “sell out” means having a great career, salary, and opportunity created through work). Klosterman correctly surmises that few viewing the film today would rubber stamp Ryder’s decision, much less comprehend it.

In 2022, the disdain for “selling out” is very difficult subject to explain to a Millennial or Gen Z social media star who are paid to hawk products as an “influencer”—or those who follow their every post.
Klosterman delves into the enigma that is Kurt Cobain and the Nevermind record (but really, the single and video for “Smells Like Teen Spirit”). No band, no matter what they say later, gets into making music to NOT be successful. Yet Cobain—who would achieve stratospheric commercial success in just a short amount of time—would spend endless interviews bemoaning that status.

It was his fear of selling out. Sure, Nirvana would agree to appear on the cover of Rolling Stone, but Cobain’s hand-scrawled T-shirt could nonetheless read “Corporate Magazines Still Suck.” Overly self-conscious about a punk fan’s reaction, he’d write “In Bloom” with self-mocking lyrics from their perspective.

Though as Klosterman points out, it was a bit premature. And his suicide by gunshot only freezes him (like Jimi, Jim, and Janis) in a time and place and look. Like other rock stars who die young under whatever circumstance, Kurt Cobain could never grow old, fat or irrelevant. Or evolve. Author Chuck Klosterman.
Photo by Joanna Ceciliani
And remember, if you missed a favorite TV show—and couldn’t figure out how to set the timer and record it on a blank VHS tape—that was it. No streaming, no On Demand, no YouTube home or Endless Reruns.

One of the book’s more interesting sections dissects the Video Rental Store experience. And how anyone could have access to thousands of titles they would never otherwise see for $2.99 a night. At home!

And how an entire generation of writer/directors—some of whom worked at video stores (Kevin Smith, Quentin Tarantino)—would make movies about movies and the kind of detail-obsessed pop culture conversations they likely actually participated in. Think of the argument about non-unionized labor on the Star Wars Death Star from Clerks or the black-suited Reservoir Dogs analyzing Madonna’s “Like a Virgin.”

Klosterman zips in and around the entirety of the decade, and even readers who were up on pop culture at the time will be reminded of things they haven’t thought about in two or more decades.

Ross Perot (who, Klosterman reminds us, got 19 percent of the popular vote when he ran for President in 1992 and mathematically doomed a second George H.W. Bush term). Fight Club and The Matrix and Titanic and American Beauty. Michael Jordan’s curious detour into a baseball career. Biosphere 2 and Dolly the Cloned Sheep. Oh, and Bill Clinton.
How about “clear” craze with Crystal Pepsi and Zima? “There’s no evidence that people of the nineties wanted clear versions of beverages that were readily available in non-clear form,” Klosterman writes. “It wasn’t something that was possible to want, because it’s not something people imagined.”

Klosterman ponders how every generation seems to be fascinated by the one that came 20-25 years earlier (to which, as an ‘80s kid who experienced the retro-‘60s/hippies fascination, can attest to).

And while it certainly makes frequent guest appearances in its most primitive forms (remember Netscape Navigator? Napster? Voice actor Elwood Edwards telling you firmly “You’ve got mail!”), the internet and social media loom large on the horizon at the end of the decade to change everything. And how many landfills today are filled with those America Online CDs that came in the mail seemingly every other day.
One of Klosterman’s funniest passages is writing out the universal sound all the bleeps, blorts, whistles, and white noise that signified connecting to a modem and finally reaching the internet in the ‘90s. I guarantee you’ll be hearing it in your head for days.

Of special interest to geeks is his dissection of the uproar caused by the questionable quality of 1998’s Star Wars: The Phantom Menace, for which expectations by an entire generation were incredibly high. As if there were any way a movie could reproduce the feeling to a 32-year-old in 1998 that their 10-year-old self had in 1977. Klosterman calls it “the saddest repudiation—and the harshest confirmation—of the entire Generation X ethos.”

If you came of age in the ‘90s, you will love The Nineties. If not, it’s a singularly wonderful analytical and historical book of a time not so long ago. A time when sending any mail required a stamp, Queen Oprah was only at the start of her reign, and if the phone rang in your house, on a landline—with no caller ID or answering machine—you never even thought about not picking it up.
KEEP THE HOUSTON PRESS FREE... Since we started the Houston Press, it has been defined as the free, independent voice of Houston, and we'd like to keep it that way. With local media under siege, it's more important than ever for us to rally support behind funding our local journalism. You can help by participating in our "I Support" program, allowing us to keep offering readers access to our incisive coverage of local news, food and culture with no paywalls.
Make a one-time donation today for as little as $1.