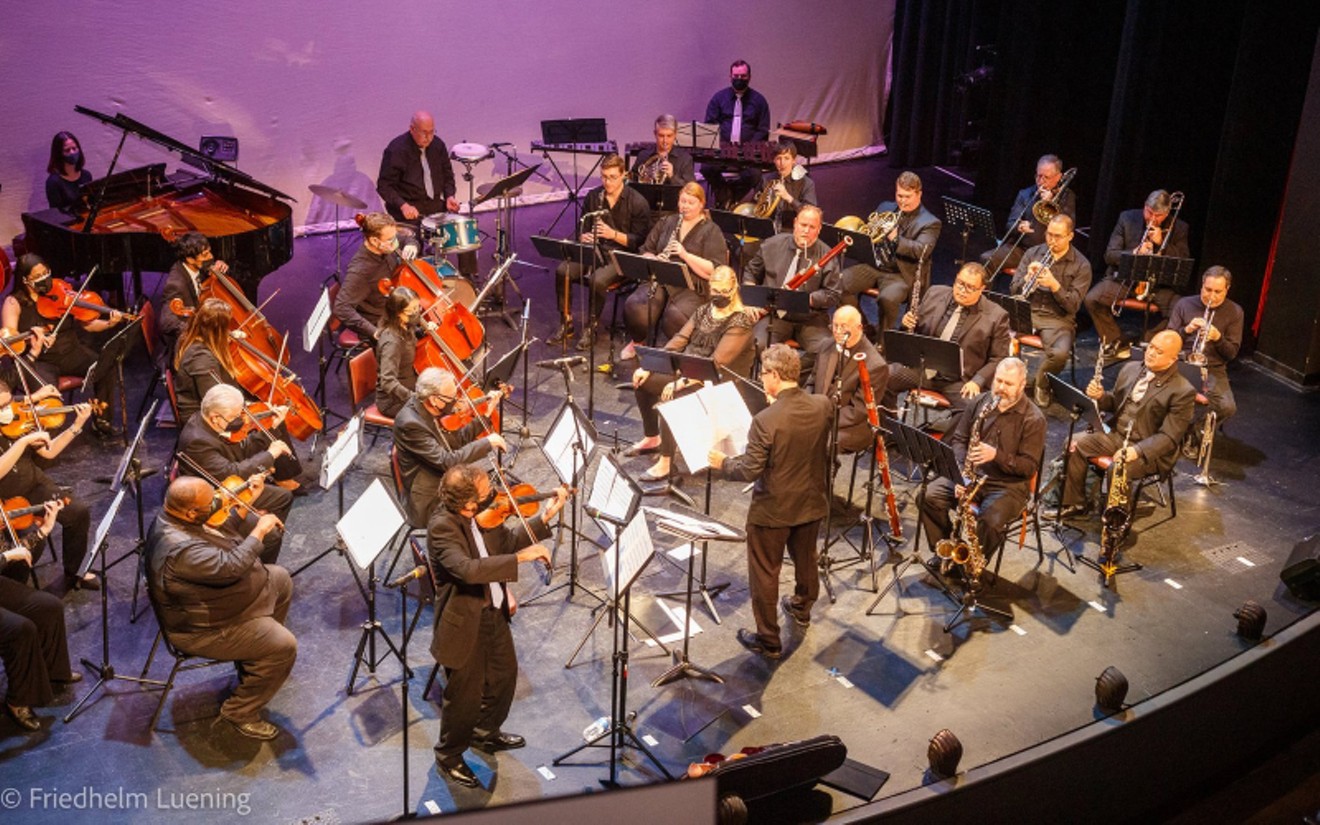 Energy Corridor of Houston Orchestra gets the New Year's Eve party started a day early this year. Photo by Friedhelm Luening
Before the ball drops to greet 2023, Energy Corridor of Houston Orchestra (ECHO) is getting a head start with its New Year’s Eve Eve celebration on Friday, December 30 at Queensbury Theatre. The concert will feature music from cultures across the globe and performances by guests soloists.

The theme of New Year’s from around the World fits in well with ECHO’s previous concert in October, titled Music from the New World.

“In a world right now where there's so much strife, pain, suffering and division, this is an opportunity for people to come together and celebrate something that we all have in common, and that is our humanity, our love of music and the possibility and hope that a new year always brings,” said ECHO’s Musical Director Michael Fahey.

The program includes music from the United States, Korea, Italy, Austria, and Venezuela, as well as soloists who will bring a special touch to the performances.

First up is bass-baritone singer Leon Turner with a series of Broadway hits from Camelot, Porgy and Bess and Show Boat. Turner is a adjunct instructor at Prairie View A&M University whose operatic and oratorio experiences include roles in Puccini’s Madame Butterfly, Mozart’s The Magic Flute, Copland’s The Tender Land, Strauss’ Die Fledermaus, Menotti’s Amahl and the Night Visitors, Gilbert and Sullivan’s The Mikado and Handel’s Messiah.

Eddy Marcano and Katherine Fuentes will perform the Venezuelan pieces. Fahey describes Marcano as “a very, very well-known violinist from Venezuela. He now lives in Katy, which is sometimes nicknamed ‘Katie-zuela’ because so many people from Venezuela now live there.” He notes that many of ECHO’s members have Venezuelan roots.

Fuentes was the principal flautist for world famous conductor Gustavo Dudemal for 15 years, both in Venezuela and in Mexico. Dudemal is now the music and artistic director of the Los Angeles Philharmonic, so it's safe to say she stems from prime pedigree.

Rounding out the soloists are ECHO’s longtime founding pianist Mary Petersen, who will play a solo during the main theme of the Italian film “Cinema Paradiso,” and last year’s concerto competition finalist Ellen Seok.

Seok is a promising, upcoming musician in her own right. She was runner up in ECHO’s annual Young Artists Concerto Competition. Having graduated from Memorial High School, where she served as the school orchestra’s concert master, she is now a freshman at Oberlin Conservatory of Music.

“Ellen was so fabulous, I wanted to give her an opportunity to perform,” Fahey said. Look for her during Winter from Vivaldi’s “Four Seasons.”

In addition, ECHO will open its doors at 6:15 p.m. for guests to get a head start on the bidding for silent auction items like a weekend cottage in Fredericksburg, a Matagorda fishing excursion, live classical or jazz ensembles for special event, wine and more. Other highlights include an audience sing-along of “Auld Lang Syne” and a lobby reception including a great sampling of food and wine – topped off with a celebratory glass of champagne.

Holding the celebration on the day before New Year’s Eve is also somewhat of a pragmatic opportunity in Fahey’s opinion.

Not only does it free up New Year’s Eve for ECHO’s audience to join family and friends in their homes or other destination of choice on the famed countdown to midnight. He said, “It’s also an opportunity for people to celebrate in advance of the New Year’s safely and close to home before the actual date when potential danger looms on the freeways and streets.”

Energy Coordior of Houston Orchestra’s New Year’s Around the World concert takes place at 7:30 p.m. on Friday, December 30 at 7:30 p.m. at the Queensbury Theatre, 12777 Queensbury Lane. Doors open at 6:15 p.m. For information or tickets, visit ECHOrchestra.org. $50 in advance or $60 at the door.
KEEP THE HOUSTON PRESS FREE... Since we started the Houston Press, it has been defined as the free, independent voice of Houston, and we'd like to keep it that way. With local media under siege, it's more important than ever for us to rally support behind funding our local journalism. You can help by participating in our "I Support" program, allowing us to keep offering readers access to our incisive coverage of local news, food and culture with no paywalls.
Make a one-time donation today for as little as $1.