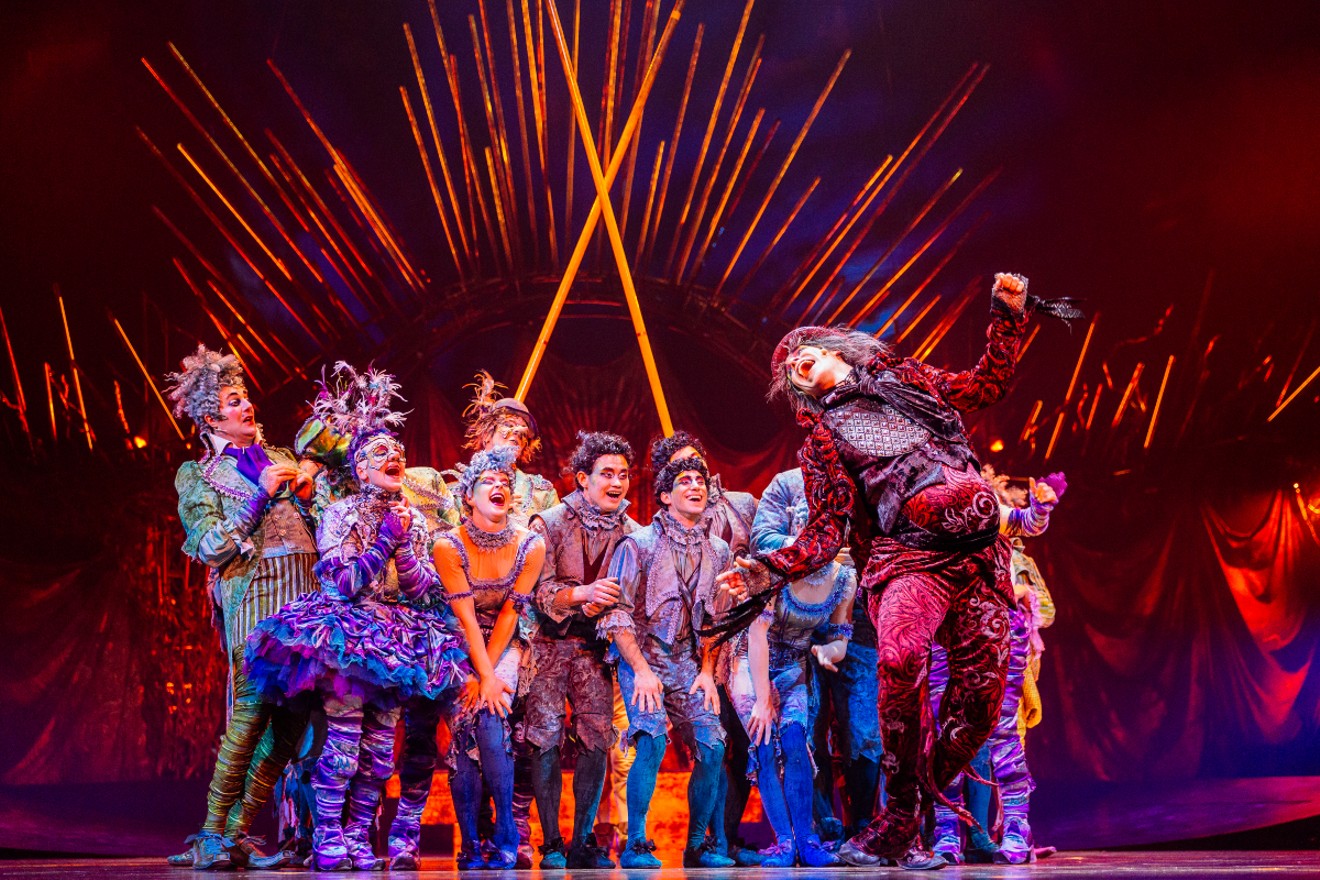 Mr. Fleur fancies himself as the legitimate heir to the thrown and clumsily tries to impose his authority. Photo by M-A Lemire
Cirque Du Soleil, the artistic fantasy circus, will return to Houston for its magical and visually jaw-dropping production of Alegría February 29 - April 12 at Sam Houston Race Park. Originally performed in 1994, the show has reached over 14 million people in 250 cities around the world. This revival keeps the essence of the original production by revisiting its signature elements and pushing them further for today’s audiences.

"A lot of our fans were asking for it. It's one of our most iconic shows, so last year, we decided to put it back on the road. We’re creating the same essence of the original; the emotions will be the same. The audience will recognize the music, and we tried to recreate what was the most iconic for our fans so they’ll recognize it through today’s lens," said Frederique Morin, senior publicist for the group.

Translated as "joy" in Spanish, Alegría takes audiences to the heart of a once glorious kingdom now in decay led by the king's fool and a dusty aristocracy. Carried by an intangible wind of change, an emerging movement from the streets strives to shake this established order, instilling hope and renewal to bring light and harmony to their world. With its joyful spirit, Alegría is a vital, energizing force driven by a thirst for a brighter tomorrow.

Since it's debut 25 years ago, much has changed in the world of circus entertainment.

"The acrobatic acts that exist now…a lot of circus art evolved through the years, so we updated Alegría for today," Morin said.

One update is the introduction of the double crossed wheel. Using his own impetus to roll forward and backward, an artist becomes a human gyroscope as he performs fluid acrobatics inside and around two intersecting wheels. Another is the dual trapeze act. Perched on side-by-side swinging trapezes, two artists perform intricate spins and breathtaking maneuvers in perfect sync. This swinging trapeze duo features new acrobatic ideas, using vertical movements and variations in the swinging axis.

Shaking the foundations of the old order, a Bronx performs a number with a new apparatus - the double crossed wheel.
Photo by M-A Lemire
The costumes have been updated as well, with even the tiniest of details lovingly crafted by hand. Audiences will also enjoy the new set.

And just who are the mind-blowing acrobats, fanciful characters, soul-touching clowns who perform in the show?

"A lot of them had a competitive background. Some of them were Olympians or gymnasts. Others trained at a circus school. They’ve been doing it for many, many years," she said. But there's nothing like touching upon the original for a little sentiment. She said, "We have two artists from Alegría from 1994."

As astounding as the feats of strength, flexibility and grace, Cirque du Soleil's history is a wonder in itself.

In the early '80s, a performance troupe took their talent to the streets of Baie-Saint-Paul, a village on the shores of the St. Laurent River near Quebec City. Known as Les Échassiers de Baie-Saint-Paul, their show highlighted jugglers, dancers, fire breathers and musicians. In 1984, to mark the 450th anniversary of the discovery of Canada by Jacque Cartier, they took the show on a province-wide tour. This traveling show offered a unique take on the circus arts: Animal free, striking, dramatic, beautiful and reflective. Street performances featured outrageous costumes, magical lighting, and original music. They adopted the name Cirque du Soleil.

In 1987, they went international with their first tour of the United States of We Reinvent the Circus. It featured a unique approach to the circus. Detailed set design, a stage flanked by seating on all sides, and dynamic audience interaction became the trademark experience that pioneered the refined template found at the core of every new Cirque du Soleil show thereafter. Cirque du Soleil soon went overseas to tour Europe in 1990. 1993’s Mystere became the first permanent Cirque du Soleil show. In the following years, the circus expanded to conquer Asia, Europe and South America with a series of new shows that tour the world, filling large arenas with sold out crowds. Now, it has become the benchmark of the modern circus.

Cirque du Soleil has ushered in a new way to experience the thrills under the big top, and for six weeks, Houston gets the chance to relive the wonder of Alegría in its refreshed form. To heighten the experience, special packages are available, and for any adults who want to share the spectacle of Cirque do Soleil with the young ones, children may be eligible to receive discounted tickets.

Take a trip into Alegría, where the show will energize the audience with a joyful spirit for a brighter and more inspiring future.

Cirque du Soleil's Alegría runs February 29 through April 20 at Sam Houston Race Park, 7575 N. Sam Houston Parkway. Shows take place 8 p.m on select Tuesdays; 8 p.m. Wednesdays; 4:30 p.m. and 8 p.m. Thursdays;  4:30 p.m. and 8 p.m. Fridays and Saturdays; 12:30 and 4 p.m. Sundays. For information or tickets, visit cirquedusoleil.com/alegria. $79 to $495.
KEEP THE HOUSTON PRESS FREE... Since we started the Houston Press, it has been defined as the free, independent voice of Houston, and we'd like to keep it that way. With local media under siege, it's more important than ever for us to rally support behind funding our local journalism. You can help by participating in our "I Support" program, allowing us to keep offering readers access to our incisive coverage of local news, food and culture with no paywalls.
Make a one-time donation today for as little as $1.