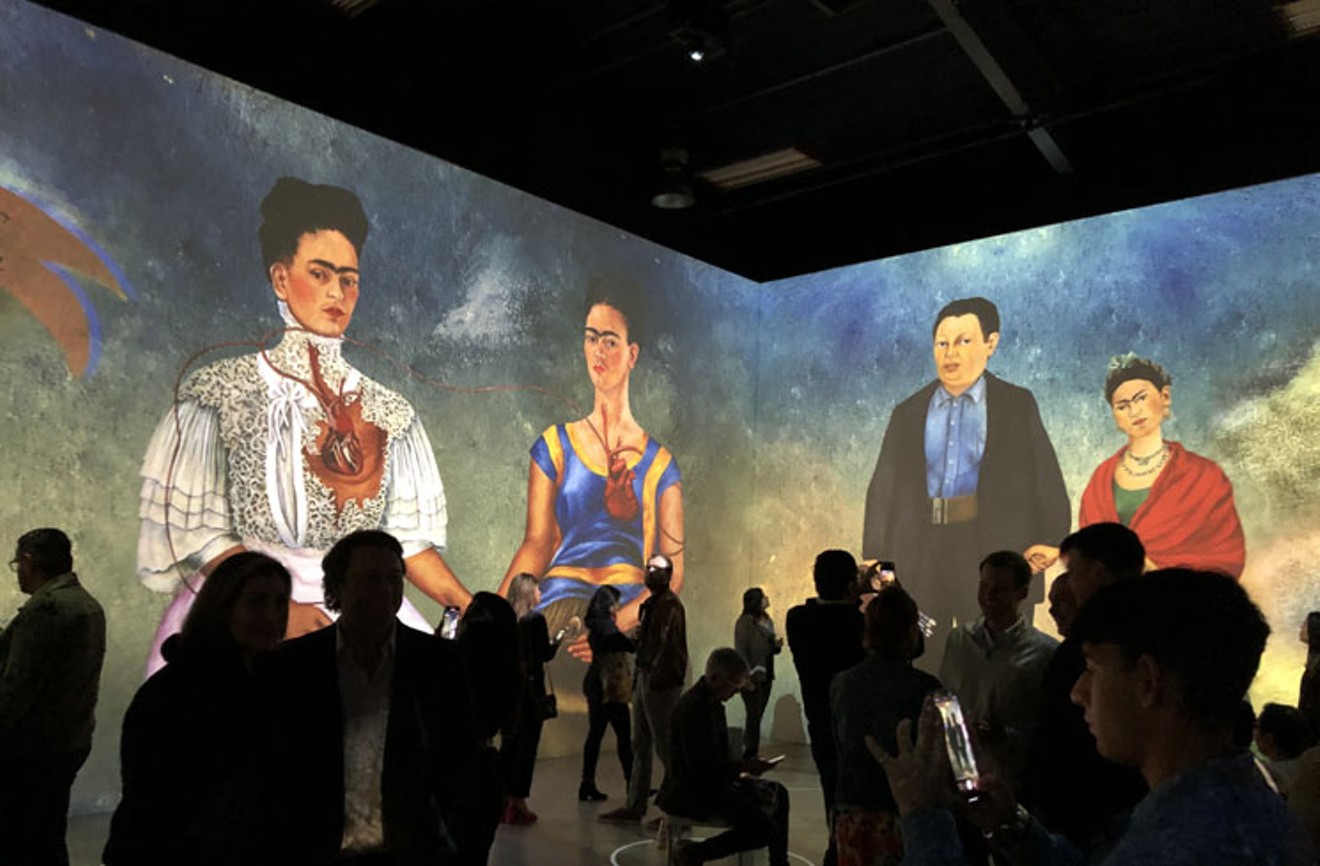 View of a portion of the digital walls in "Immersive Frida Kahlo." Photo by Bob Ruggiero
Mara Kahlo is standing in at the edge of a large room in a converted building near the intersection of Beltway 8 and I-10. Her gaze wanders in awe across the four walls that surround her.

“It’s an honor and a responsibility to be here. I get emotional even now,” she says. “You get to see her sensibility, her freedom and her passion. It’s just wonderful.”

She is talking about the woman whose visage—painted by her own hand—stare down from those tall walls. It’s a family member, and her own grandmother Cristina’s sister, the well-known artist Frida Kahlo. Which means that Mara is Frida Kahlo's grandniece.

“She loved Mexico and she loved those beautiful dresses and the flowers. She always did many things for the culture. I’m very proud of her, and our mission is to continue her work,” she adds. “Here you can see both Frida the artist and Frida the woman. I was born the year before Frida [passed]. But I see my mother and my aunts, and you can hear Frida’s heartbeat.”

Kahlo is in Houston—along with her own daughter, Mara De Anda—as special guests for the preview of Immersive Frida Kahlo. Mara Kahlo and her daughter, Mara de Anda. Frida Kahlo is Mara Kahlo's grandaunt.
Photo by Bob Ruggiero
The main attraction of the experience is a 42-minute, 360-degree digitally-projected film in that same room where which scores of Kahlo’s works seemingly come alive and morph into each other while wordlessly telling the story of her life and art. Photos of Kahlo, period film footage, and the works of her former husband, Diego Rivera, add context. By the numbers, the film consists of 500,000 cubic feet of art in 90,000,000 pixels and 1.2 million frames of video.

Attendees feel as if they’ve stepped into the paintings and can visually scan each of the walls which showcase different animated footage. At one point, the floor even seems to shift and move with the optical illusions of the digital projections. One sequence shows Kahlo painting of her face on the head of an injured deer—which then slowly turns to face forward. The images are alternately beautiful, compelling and disturbing.

A young Frida gazes from the walls.
Photo by Kyle Flubacker
There’s unfortunately no narration of Kahlo’s life or actor voiceovers of her words. But accompanying music by Luca Longobardi sets the tone (though on this night, the volume seemed somewhat on the low end).

Immersive Frida Kahlo is produced/designed by Lighthouse Immersive under the studio development of Impact Museums, which is also responsible for the similar Immersive Van Gogh experience.

That debuted some months ago and will trade off showings with the Kahlo exhibit in the same venue. This is not to be confused with the competing and similarly-named-but-different Van Gogh: The Immersive Experience, also currently running at another location. Vittorio Guidotti is the Art Director for the Kahlo film.

Producer Vito Iaia of Impact Museums, standing next to Mara Kahlo, says that Frida Kahlo was a natural choice for a new experience, but with some differences.

“The Immersive Van Gogh was more of a collection of his works. Here, what [digital artist] Massimiliano Siccardi has done is more of a journey through the life of Frida Kahlo. Her art is portrayed of course, but there are also other elements that [reflect] her times,” he offers.

“Frida had a lot of struggles. But she’s also the most famous female artist of all time. And she represents a lot of communities. This is not just a show for people who love art.”

In the well-stocked gift shop sprinkled with hundreds of items bearing the images of Van Gogh, Kahlo, and their art is a special piece in which attendees can put their face into a cut-out in a piece of Kahlo’s art, with the artist herself looking on. 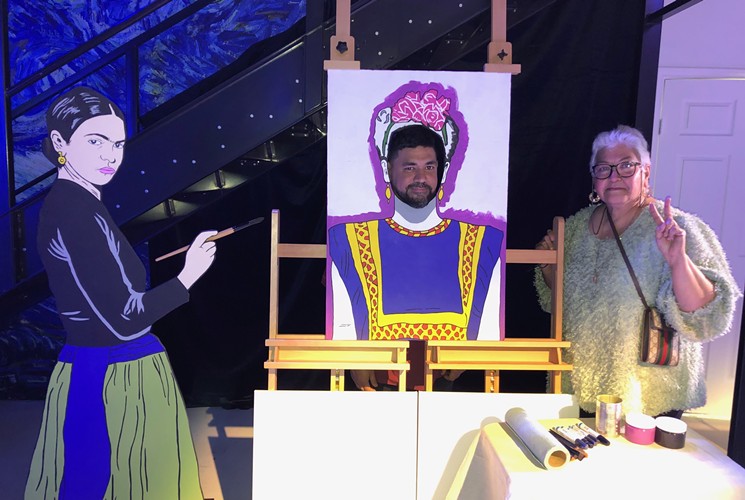 Donkeeboy (in painting) and Donkeemom in her Kahlo tribute.
Photo by Bob Ruggiero
It was created by Houston artist Donkeemom (aka Sylvia Roman), who with her son Donkeeboy (aka Alex Roman, Jr.) have made a name for themselves with their collaborative work on large and colorful murals, even gaining national attention.

“I’ve been a fan of Frida’s for a long time, and as a woman, I respect the accomplishments she achieved in her life and her art,” the Spanish-speaking Donkeemom says with her son translating into English. “I consider myself a feminist, and I have a lot of love for women. And I respect Frida.”

Frida Kahlo was born in 1907. As a child, she suffered from polio and nurtured a burgeoning interest in art which her parents encouraged. She was involved in a bus accident at the age of 18 which left her with lifelong painful health complications and hospital and surgery trips. But it was while recovering in bed that she began painting on her own via a special easel her mother had made.

A mirror placed over her bed left her staring at her own reflected image for hours, and she began exploring her own identity both in her head and on canvas. “I paint myself because I am often alone and I am the subject I know best,” she said. 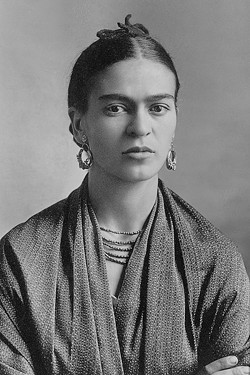 Frida Kahlo in 1932.
Photo by Guillermo Kahlo, Public domain
As her career developed, she entered a sometimes tumultuous (both personally and professionally) marriage to fellow artist Diego Rivera in 1929. They would divorce a decade later but continue an on-and-off relationship. Both would have many affairs, and Kahlo with partners of both genders.

Kahlo’s work embraced side widely-varying styles and subjects as Mexican folklore, nationalism, and history, surrealism, magical realism, feminism, roots/plants, religion and politics (she was a dedicated member of the Communist party). And of course, many self-portraits, with her trademark “unibrow” prevalent.

She also taught art and was the first Mexican artist to have a work purchased for display by the Louvre and found admirers and champions in American and Europe in the ‘30s and ‘40s. Though it did not make her wealthy, she took commissions, sometimes grudgingly.

Her health declined in the late 1940s as she became less mobile, but Kahlo continued to paint. It was then that her native country started to truly embrace her work and had her first solo exhibition in Mexico in 1953.

No one expected her to actually attend the opening, but she surprised and delighted the crowd when she arrived via ambulance and greeted guests while reclining in a bed brought into the gallery. She passed away the next year, but it wasn’t until the 1970s that her work started to gain the attention and appreciation it has today.

One self-portrait, 1949’s Diego y yo (which also features Rivera), sold last November at a Sotheby’s auction for $34.9 million, setting a record as the highest price for any Latin American artist. The oil painting measures only 11.6” x 8.8”.

Back at the Immersive Frida Kahlo exhibit on Brittmoore, Mara Kahlo asks if she can tell me one more thing. It’s about her name. And an Ape Man.

She says that actor Johnny Weissmuller, who played Tarzan on the silver screen in a series of films in the 1930’s and ‘40s, had a home in Acapulco, Mexico. The year 1948 saw the release of his last time in the role Tarzan and the Mermaids. In the film, the comely aquatic co-billed stars could grow legs every full moon and are able walk on land. The lead mermaid was played by Linda Christian and named Mara.

“Frida saw that movie, and she loved the name of Mara! She used to sign that in letters to her lovers, and also on some of her art,” she says, a wide grin breaking across her face. “This is why my name is Mara! Because my grandmother loved it too!”

Immersive Frida Kahlo runs through April 17 at Lighthouse Artspace, 1314 Brittmoore. For information, visit Immersive-Frida.com. $39.99 and up.
KEEP THE HOUSTON PRESS FREE... Since we started the Houston Press, it has been defined as the free, independent voice of Houston, and we'd like to keep it that way. With local media under siege, it's more important than ever for us to rally support behind funding our local journalism. You can help by participating in our "I Support" program, allowing us to keep offering readers access to our incisive coverage of local news, food and culture with no paywalls.
Make a one-time donation today for as little as $1.