Amy Bruce stars in the one woman play, On The Exhale, making its Texas premiere at Rec Room Arts. Photo by Natasha Gorel
On May 18, 2018 the Houston metropolitan area became ground zero for the conversation about gun violence. At Santa Fe High School, Dimitrios Pagourtzis opened gunfire, killing ten people and wounding thirteen others. Incidents such as these have become all too common; this year alone there have been 25 mass shootings in the United States.*

On The Exhale, a newish play by Martín Zimmerman making its Texas premiere at Rec Room Arts, was inspired by another horrific event: the 2012 Sandy Hook massacre that saw a gunman kill 27 people in an elementary school within minutes.

Zimmerman couldn't understand how one of the nation's worst school shootings wasn't moving our government to take meaningful action on gun control, and he channeled that frustration when writing On The Exhale. The 60-minute, one woman show made its world premiere in 2017 at New York's Roundabout Underground and Amy Bruce — who was wonderfully unmoored in The Catastrophic Theatre's eccentrically imaginative Leap and the Net Will Appear — has the role in the Houston production.

While the subject matter may seem familiar, Zimmerman wisely steers clear of clichés and stereotypes typically associated with debates on gun violence. The result is an original perspective that follows one woman as she negotiates the role of assault rifles in her life. After an act of violence hits close to home, she finds herself obsessing over the same weapon that was used in the crime. Despite her best intentions, she becomes conflicted about the feelings of power associated with guns and quickly realizes that we are all implicated in the divisive issue of gun violence. To say more would be to spoil the plot, but the play twists and turns in unexpected ways, ultimately serving as a conversation starter for audiences looking to engage in this discussion through theater.

“My main hope is that the play enrages audiences about our government’s refusal to meaningfully address gun violence in any way,” says Zimmerman. “By walking through the aftermath of a shooting with a victim, by sitting with her inside each moment as she desperately tries to take some action yet finds herself frustrated at every turn, I hope to communicate some of the rage I feel — which is itself just the smallest glimmer of the rage victims must feel — and convince audiences the current situation is unacceptable.”


"I hope to communicate some of the rage I feel ... and convince audiences the current situation is unacceptable.” — Martín Zimmerman

Rec Room's Executive Director Stephanie Wittels Wachs is directing the Houston production and was drawn to the play because of how it authentically portrays the grieving process, something she chronicled in her 2018 book, Everything Is Horrible and Wonderful: A Tragicomic Memoir of Genius, Heroin, Love, and Loss.

Even so, despite its subject, the play is not just about gun violence. Rather, Zimmerman’s script focuses on how gun legislation affects everyday people and how, oftentimes, grief becomes a major part of their lives. 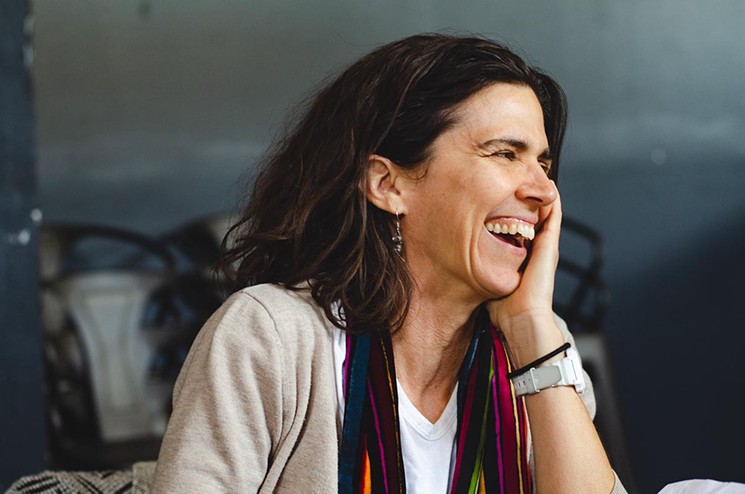 In The Catastrophic Theatre's Leap and the Net Will Appear, Amy Bruce portrayed a woman desperately trying to find herself. Shown here in rehearsal, her character takes a different journey in On The Exhale.
Photo by Natasha Gorel
While a play about gun violence has the potential to be heavy-handed, Zimmerman balances poignant commentary about gun culture with humor, turning a weighty subject into an accessible and fascinating hour of theater. Rec Room Arts seeks to present new works that challenge the definition of art and performance and On The Exhale does just that, using art-making to provoke conversations about gun violence that may serve as a beacon for change.

"Drink and Discuss" events are scheduled after the February 23 and March 2 performances. The first, labeled "Motherhood," gives a behind-the-scenes look at the play's production while the second, titled "Trauma," explores the challenges of depicting grief in theater and film.

Performances of On The Exhale are scheduled for February 20 through March 9 at 7:30 p.m. Wednesdays and Thursdays; 8 p.m. Fridays and Saturdays at Rec Room Arts, 100 Jackson. For information visit recroomarts.org. $15 to $40. ASL interpretation will be provided during the February 28 performance.

*According to the Gun Violence Archive, gunviolencearchive.org.
KEEP THE HOUSTON PRESS FREE... Since we started the Houston Press, it has been defined as the free, independent voice of Houston, and we'd like to keep it that way. With local media under siege, it's more important than ever for us to rally support behind funding our local journalism. You can help by participating in our "I Support" program, allowing us to keep offering readers access to our incisive coverage of local news, food and culture with no paywalls.
Make a one-time donation today for as little as $1.

Trevor Boffone is a Spanish teacher at Bellaire High School and a lecturer in the Women’s, Gender & Sexuality Studies Program at the University of Houston. He also contributes to the Houston Press from time to time.
Contact: Trevor Boffone