Timely "Soul of a Nation" Finally Reaches the MFAH. But See It, Quick! "Did the Bear Sit Under the Tree?" by Benny Andrews, 1969. From the Emanuel Collection. MFAH installation photo by Bob Ruggiero
Sparked by a spate of high-profile killings of African-Americans by law enforcement and private citizens – and the worldwide George Floyd/Black Lives Matter protests that have ensued and continue – we are seeing unprecedented dialogue about, attention to, and action against long simmering issues of racial prejudice, inequality, and social injustice. "Freedom Now" by Reginald Adolphus Gammon, 1963.
The National Afro-American Museum and Cultural Center in Wilberforce, Ohio. Courtesy of the MFAH.
So one could feasibly think that the Museum of Fine Arts, Houston was somehow incredibly prescient in booking "Soul of a Nation: Art in the Age of Black Power." However, the exhibit— which originated at London’s Tate Modern—was expected in Houston in April, the last stop of a three-year tour.

But the nationwide closure of museums and difficulties with transportation means the exhibit will now have a shortened residency in Houston, only on view through August 30.

“This is such an urgent and compelling project,” MFAH Director Gary Tinterow told an assemblage of local media (temperature checked and fully masked per MFAH policy) at a preview just an hour before the doors opened to the public.

“It was installed in record time, and it’s very freshly current, to our great shame as a society. Every political issue represented here could have been painted yesterday”

He adds that the issues tackled in "Soul of a Nation" are still with us, and unresolved. “I hope now our society and nation has the courage and the momentum to address these problems. It won’t happen overnight and it won’t happen in November, but we have to be dogged in our pursuit for justice and equality and education.” Tinterow adds, noting that he realizes many of the works will be “more than uncomfortable” for white patrons to see.

MFAH Assistant Curator of Modern and Contemporary Art Kanitra Fletcher installed the exhibit. She also hand-picked works from the MFAH’s own collection to also include, with an emphasis on Houston artists who worked in multiple disciplines including John Biggers, Carol Harris Simms, Earlie Hudnall, Jr., and Kermit Oliver. 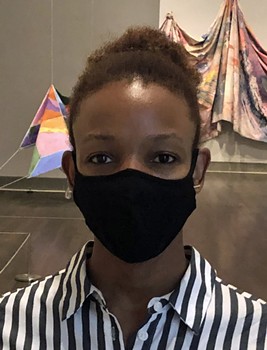 Kanitra Fletcher, MFAH Assistant Curator of Modern and Contemporary Art.
Photo by Bob Ruggiero
“This exhibit is both a revelation and very relevant right now,” she says. “And while some of the art was created over 50 years ago, and [address] similar issues to what we are dealing with now. It’s sad that they remain with us, but this artwork is inspiring and profound. I look forward to the questions and conversations this exhibit will stimulate.”

More than 60 artists are represented with 174 pieces in the exhibit (which includes ephemera like newspaper clippings), with the bulk from the mid-‘60s through the mid-‘80s. There are paintings, photographs, sculptures, modified found art, prints and posters, ceramics, wood cuttings, newspaper clippings and magazines, screen prints, welded metal, leather, and mixed media.

“It’s interesting to see the vast range of different approaches [the artists] have to issues,” Fletcher adds. “Every section is different. Some people are responding with literal depictions of racial violence and images, and others are more abstract. There’s a freedom and resilience there.”

As for the representation of Houston in the exhibit, Fletcher says the story of black artists in the city definitely tie into a wider narrative.

"Fred Hampton's Door 2" by Dana Chandler, 1975.
MFAH installation photo by Bob Ruggiero
“In many ways, Houston was its own arts destination at the time. They came from all over the country to study with John Biggers, and we had a rich art scene,” she offers. Biggers founded the art school at Texas Southern University. “And that was the only way for black artists to get training, to go to HBCUs [Historically Black Colleges and Universities]. We have these incredible works in our collection, but they can’t always be on view. This is a great chance to pull them out. “

Some of the works are jarring. In America the Beautiful, painter Norman Lewis depicts what at first glance may seem like random white pointed splotches on a black background, but once the viewer steps back, quickly reveal themselves to represent hooded Ku Klux Klansmen and burning crosses.

Betye Saar’s mixed media The Liberation of Aunt Jemima shows the stereotypical black mammy with broom in one hand and a gun in the other, standing behind a clenched black fist. Ironically, the Quaker Oats company decided to discontinue the longtime name and image for their pancake syrup just a couple of weeks ago.

Then there’s Dana C. Chandler’s Fred Hampton’s Door 2. The painted door frame is covered in bullet holes, and a small area with white stars on a blue background says “U.S. Approved” area. It commemorates the real-life 1969 killing of the activist and member of the Black Panther Party, shot in his bed during a predawn raid by local and federal law enforcement agencies. The parallels to Breonna Taylor's death by police echo loudly.

“Artists are very much engaged in the world,” Fletcher says. “The visual arts aren’t removed from society; they’re engaged in political issues.” 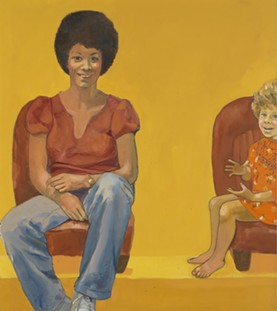 "Eva the Babysitter" (detail) by Emma Amos, 1973.
Photo courtesy of Emma Amos, the Amos Family, and RYAN LEE Gallery, New York.
But "Soul of a Nation" isn’t all darkly political. Many other pieces showcase Black Pride and the joy of its African-American subjects. Jarrell Wadsworth’s Revolutionary (Angela Davis) is a boldly colored mixed media painting of the activist in full throated speech. Emma Amos’ Eva the Babysitter shows a smiling childcare worker and her diminutive charge.

And when Lorraine O’Grady hired dancers on a float for a 1983 parade in New York City to carry empty picture frames for spectators to pose behind, her series of 40 images Art Is… exudes unexpected and sheer joy.

"Soul of a Nation" will also feature accompanying online discussions, films, artist conversations, and other programs. Most of those were originally planned to occur on-site, but since cancelled due to the pandemic.

Due to the shortened display run at the MFAH and the limited amount of people the Museum is allowing into the exhibit at any one time (a maximum of 80), Gary Tinterow knows that far fewer people than he had hoped will actually get to see "Soul of a Nation." But he’s chosen to take a quality-over-quantity approach.

“I’m sorry we can’t have tens of thousands of people see it. But if only ten people see the exhibition, then ten minds will be changed.” he says. “It’s just so meaningful just to have the opportunity to show this exhibit. And it means a lot to me personally.”

Soul of a Nation: Art in the Age of Black Power continues through August 30 at the Museum of Fine Arts’ Audrey Jones Beck Building, 5601 Main. Timed entry tickets are recommended, and pandemic safety protocols are in place. For information, call 713-639-7300 or visit mfah.org. $12-$19; children 12 and under free; free to all on Thursdays.
KEEP THE HOUSTON PRESS FREE... Since we started the Houston Press, it has been defined as the free, independent voice of Houston, and we'd like to keep it that way. With local media under siege, it's more important than ever for us to rally support behind funding our local journalism. You can help by participating in our "I Support" program, allowing us to keep offering readers access to our incisive coverage of local news, food and culture with no paywalls.
Make a one-time donation today for as little as $1.