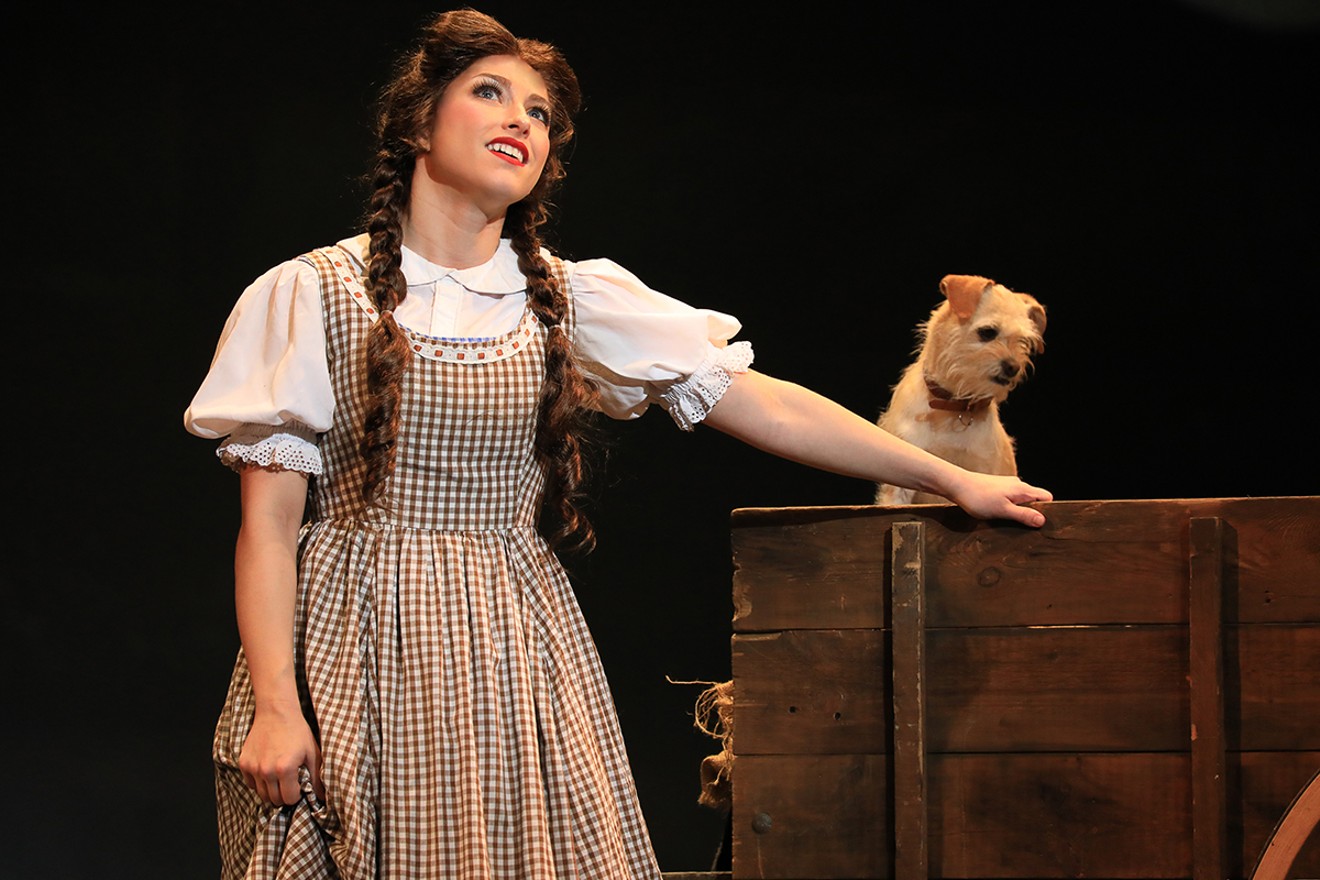 Dorothy (Kalie Kaimann) sings "Over the Rainbow" while Toto (Murphy) waits for his next trick. © Photo by Denise S. Trupe
Confidence is a must for any actor in the musical The Wizard of Oz, coming to Houston audiences courtesy of the Society for the Performing Arts. Stealing more than a few scenes is rags-to-riches Murphy, a very talented Brussels Griffon/Cairn Terrier mix with an adorable underbite.

"He was at the ASPCA in Arizona, in Phoenix, and I was looking for a little companion," says Lizzie Webb, who is the co-owner and co-handler for Murphy along with her fiancé Scoob Decker. "I wanted a dog that I could take with me that could come to shows with me. I found him at the shelter and I can’t even describe how perfect he was from the very first day."

So perfect, in fact, that it soon became clear that Murphy was comfortable being handled by all the actors backstage. "He didn't show signs of being nervous. I started bringing him to sit with me in the orchestra pit. Loud noises didn’t bother him; he would sleep through the show under my feet."

Not long after that fateful adoption in 2016, Webb was hired as music director for Mary Poppins. "Since he came to the show, they cast him in the role [of the dog]. He got to wear all kinds of costumes; he was so adorable," says Webb. The following year the same theater company did The Wizard of Oz and, now a seasoned veteran of the stage, Murphy got the part of Toto.

"Then I found out the national tour was hiring a Toto and I submitted him to be Toto and me to be the musical director," says Webb about the two-for-one audition. When they were both cast, Decker also auditioned and was cast in the ensemble and as an understudy, so it's definitely a family affair.

Professor Marvel may see all, but Murphy steals the scene, and the sausage.
© Photo by Denise S. Trupe
"It's a crazy, amazing adventure we're having together," says Webb. Murphy has become somewhat of a social media celebrity, and fans can follow his story at #montanamurphy. "If you go on Instagram you'll see posts from me, the crew and cast, and even audience members," says Webb, who tells us there's a scene where Murphy steals a sausage from Professor Marvel and does a little dance. "The audience pretty much goes nuts every night."

It's a landmark year for the 1939 MGM movie and, even 80 years later, the magical tale of the Emerald City remains relevant for all ages.

"People bring their little kids, their grandkids. Just yesterday someone was at our show; their grandfather created all the props for the movie. They found out that [author] L. Frank Baum’s grandson came to our show one time so that was pretty neat," says Webb. "Everybody has something that they enjoy, whether they remember seeing it as a child or bringing someone to see it for the first time.

"We never take for granted how lucky we are to be able to do this together and especially doing such a special show. I grew up watching it, [Decker and I] both did, and to tell the story every night with Toto — it’s a dream come true," says Webb.


"To tell the story every night with Toto — it’s a dream come true." — Lizzie Webb

So what's next for #montanamurphy? "We always look for shows that have dogs in them. We would love to do Legally Blonde; he’s part chihuahua. He would need a haircut for that one. He's a little too small to play Sandy in Annie," adds Webb.

Audience members will hear favorite songs including "Over the Rainbow," "Ding Dong the Witch is Dead" and "If I Only Had a Brain."

Society for the Performing Arts is launching its inaugural Family Day during the matinee show on February 23, with a photo booth, face painting and special decorations. Families are encouraged to wear their own The Wizard of Oz themed costumes.

Performances are scheduled for February 23 and February 24 at 3 and 8 p.m. Saturday and 1 and 6:30 p.m. Sunday at Jones Hall, 615 Louisiana. For information, call 713-227-4772 or visit spahouston.org. $35 to $130.
KEEP THE HOUSTON PRESS FREE... Since we started the Houston Press, it has been defined as the free, independent voice of Houston, and we'd like to keep it that way. With local media under siege, it's more important than ever for us to rally support behind funding our local journalism. You can help by participating in our "I Support" program, allowing us to keep offering readers access to our incisive coverage of local news, food and culture with no paywalls.
Make a one-time donation today for as little as $1.