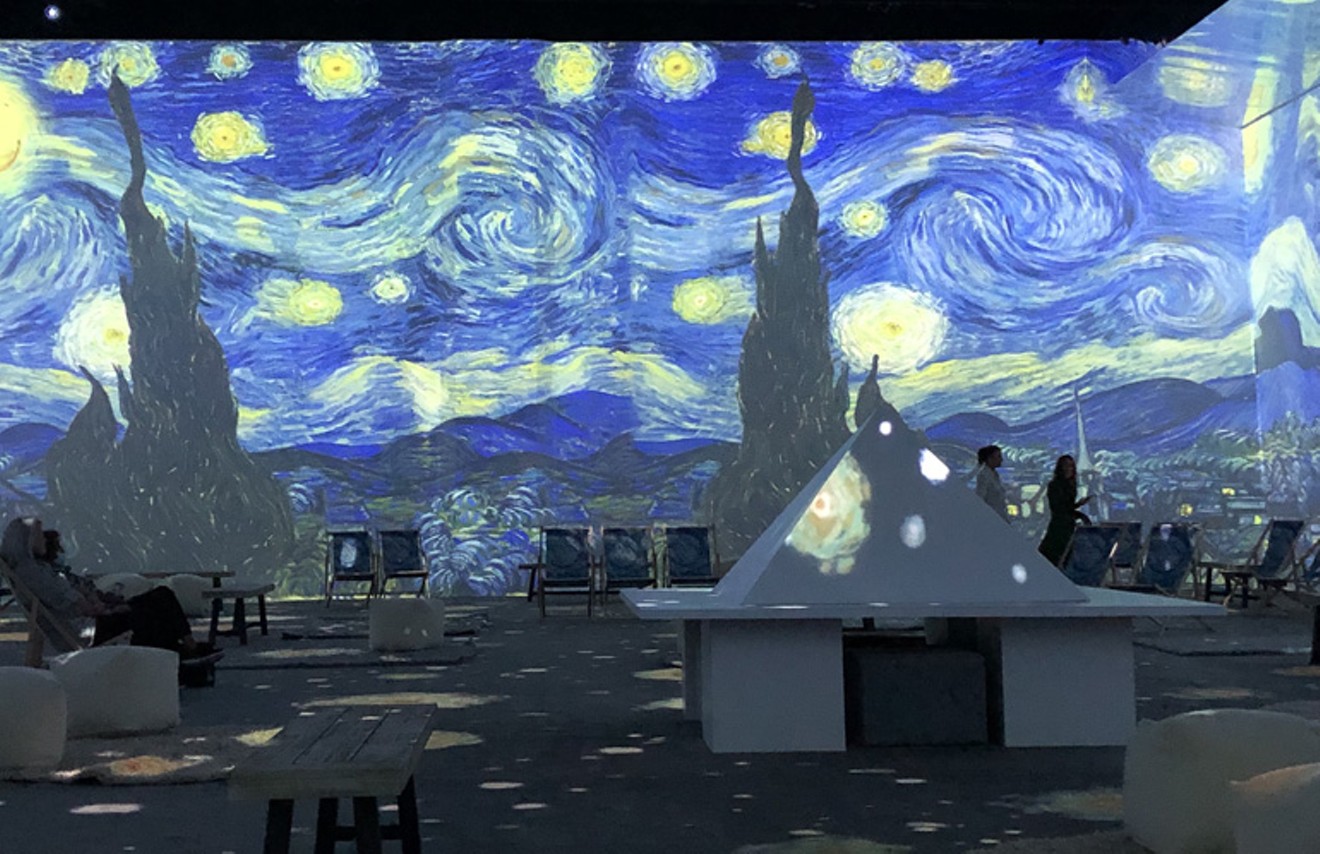 The centerpiece of the Experience is a large room with 360-degree digital/animated projections of Van Gogh's work, including one of his most famous paintings, "The Starry Night." Photo by Bob Ruggiero

Of all the Impressionist painters, Vincent Van Gogh (1853-1890) is likely the genre’s Biggest Rock Star. An artist whose name and work is recognizable even among the general non-art loving public, and whose rudimentary life sketch only burnishes his image (the madness, the poverty, the suicide and that auditory appendage sent to a prostitute as a gift…).

Van Gogh’s work—of which he purportedly only sold one during his life—oddly sometimes takes a backseat to the story. But Van Gogh’s art claims front and center in the jaw-dropping and sensory-shattering exhibit Van Gogh: The Immersive Experience. 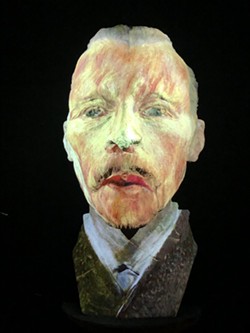 “When we had this idea to create this Experience, we looked at a few artists. I was looking for a natural story. All of the artists were great, but what makes Van Gogh particularly interesting are his colors. And he was partly color blind!” says Mario Iacampo, CEO and Creative Director of producers Exhibition Hub.

“There’s a richness. These strong blues and yellows and oranges. And many of the paintings showed large areas. That made it [perfect] for this Experience.”

In this digitally-driven journey, visitors can almost become part of Van Gogh’s works themselves, and it certainly gives a different appreciation and understanding than any traditional gallery walk would.

The centerpiece of Van Gogh: The Immersive Experience is in a room that’s several thousand square feet large. As visitors sit on benches, cushions, Van-Gogh decorated beach chairs, or even lie on their backs on rugs, a 360-degree panorama projection on 26-foot high walls plays via video mapping technology.

During it, viewers see more than 300 of Van Gogh’s works of nature and places in multiple images literally come to life in animation and with transformation all around. Constantly-moving animation has paintings literally melting into each other in waves.

There are many of Van Gogh’s self-portraits throughout his life, as well as the real-life figures he painted (there’s Dr. Gachet! Pére Tanguy! Farmer Patience Escalier! And the wildly-bearded Roulin the Postman!). They often move and "come alive" much like the portrait galleries in the Harry Potter movies.

Even the floor below becomes part of the show with projections from above. The 35-minute presentation comes complete with booming classical music, sound effects and a suitably stentorian narrator occasionally speaking Van Gogh’s words (we recognize you, Jeremy Irons!).
click to enlarge Visitors can step into and take an Instagram-friendly photo on the bed in "The Bedroom at Arles."
Photo by Bob Ruggiero
“Van Gogh tells you what he was thinking, all the time. He wrote over 700 letters to his brother Theo, so we have his actual words to tell his story,” Iacampo says. “He would take about how depressed he was and dark in his life. But then he would paint Wheatfield with Crows and say ‘All I see is yellow, yellow, yellow.’ He helps you with his own story. And he only painted for nine years!”

It’s difficult to describe the transformative feeling, and the oddly compelling emotions this part of the show elicits. But it is nothing sort of a triumph, a successful and unlikely union of oil paint, pen ink and computer programming. You don’t just see The Starry Night, you feel the interstellar illumination as if it were real, yet through Van Gogh’s eyes.

The show includes several other sections. In the first area visitors encounter, a gallery gives details of Van Gogh’s life with timelines and reproductions of some of his most famous works on canvas (which disappointingly, seem to stem from lo-res images). 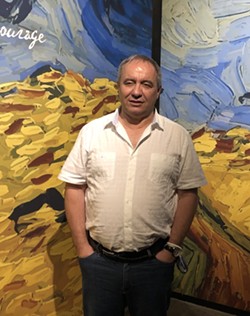 The first indication that this exhibit is “different” comes in the form of a large bust of Van Gogh’s face onto which images of his work are projected in an ever-changing pattern. Similarly, one digital flower vase laps over and over with examples of his work in that vein.

Another room features 3-D reproductions of some of his work. And yes, you can actually walk into and sit in the famous Bedroom in Arles, accurate down to black strokes on the furniture to make it appear as they do in the painting.

In fact, much of the entire show is Instagram-friendly. There’s also an art studio where visitors can sit down a color one of Van Gogh’s works or create one of their own.

The last stop on the exhibit walk though will be the favorite for many. After strapping on Virtual Reality goggles while sitting on a stool, attendees take a mind-bending 10-minute lifelike trip through the geography of Van Gogh’s natural world.

You “float” through the settings from many of his works: The house he lived in, over the wheat, corn and flower fields of France, lush gardens and orchards, past forests with olive and cypress trees, down the cobblestone streets while peaking into buildings and The Night Café, past sleeping workers from The Siesta or looking down into calm blue waters with boats under suitably twinkling skies. And of course, the hospital at Arles where Van Gogh was committed toward the end of his life.

Along the way, viewers stop as another stentorian narrator (no Jeremy this time) provides atmospheric words as Van Gogh’s works crop up alongside their wider virtual representations. The VR is not super sharp, but realistic enough that I found myself many times grabbing my stool to prevent myself from “falling” down stairs or into water.

“It’s incredible how much more powerful perception is than reality. No matter how much you tell yourself that it’s not real or happening!” Iacampo laughs. “Eventually, you lose yourself.”

Iacampo estimates that Van Gogh created around 900 paintings and 1,100 sketches in his short life, noting that new, authenticated works that were previously unknown still pop up. He even had to change up the exhibit when it was determined by experts that 1890’s Tree Roots was likely the last work the artist ever created—replacing Wheatfield with Crows in the exhibit with that recognition. You almost want to pitch in and help Van Gogh's subjects with roof repair in the Experience.
Photo by Bob Ruggiero
To date, Van Gogh: The Immersive Experience has or will show in cities across the U.S. (including Miami, New York, Dallas, Seattle, Boston), as well as in Europe (Antwerp, Berlin, Brussels, Naples, Tel Aviv, London), and even in China.

Iacampo says part fo the challenge for the traveling exhibit that will appear in multiple cities simultaneously is finding and adequate existing space to build it in. And the most important feature needed? Walls. High walls. In Atlanta, the Experience is projected on 45-foot high walls, and 60-foot in Philadelphia.

He admits that Van Gogh: The Immersive Experience is catered to an audience in a digital age with an interest in art, rather than the traditional art gallery walker or expert. And that the work of the more than a dozen computer programmers and visual artists who put this experience together were crucial to pulling it off.

And this show is not the only one taking the “immersive” approach. The entirely different and competing Immersive Van Gogh is scheduled to run in Houston beginning October 14 at another venue.

Iacampo lets it drop that Exhibition Hub’s next Immersive Experience will be on the life and work of René Magritte, with the cooperation of the Magritte Foundation (all of Van Gogh’s works are in the public domain).

As for the story of Vincent Van Gogh, it’s actually still evolving, and that could mean more future changes to the show. “I just saw an article a few days ago that said another sketch of his may have been found. And another painting,” Iacampo says. “Van Gogh’s story is still going!”

Van Gogh: The Immersive Experience is scheduled to run through January 2, 2022 at the MARQ*E Entertainment Center, 7620 Katy Freeway, in a space between Edwards Cinema and LA Fitness and and by O’Connors. VanGoghExpo.Com to purchase tickets and select timed entry. $22.90 (children) and $44.90 (adults). Package deals and VIP experiences are also available.
KEEP THE HOUSTON PRESS FREE... Since we started the Houston Press, it has been defined as the free, independent voice of Houston, and we'd like to keep it that way. With local media under siege, it's more important than ever for us to rally support behind funding our local journalism. You can help by participating in our "I Support" program, allowing us to keep offering readers access to our incisive coverage of local news, food and culture with no paywalls.
Make a one-time donation today for as little as $1.