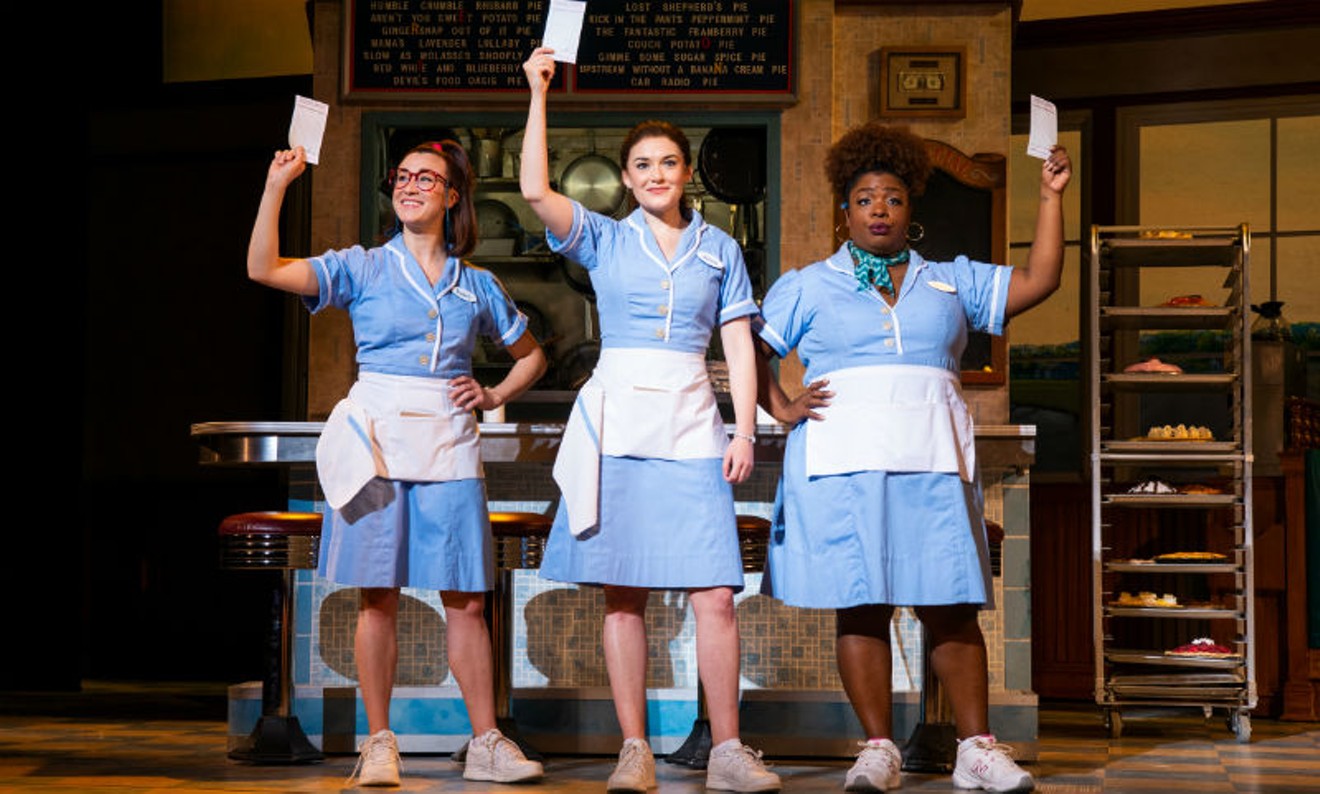 In Waitress, Jenna longs for a better life than the one she has with her abusive lout of a husband. A waitress, she's also an exceptional pie maker and looks to a baking contest to help her get out of where she's stuck in life.

Based on the movie by Adrienne Shelly, the musical Waitress employs all manner of top-level talent including six-time Grammy® nominee Sara Bareilles ("Brave," "Love Song") who wrote the music and lyrics. And it is coming to the Hobby Center for a short run courtesy of Mischer Neurosciences Broadway at the Hobby Center.

Christine Dwyer (Broadway/tour: Wicked (Elphaba), Finding Neverland (Sylvia), Rent (Maureen) plays Jenna and as a longtime fan of the movie, says she was thrilled to find out Bareilles was writing for the musical version.

"I think she is brilliant. I's unlike other musicals I've been in because there is a pop writer. She tells stories through her pop songs. It’s not like a Wicked when I’m standing center stage and there's smokk and all that. It's a much more human story. I was really interested in taking on this role."

Waitress the musical has done well, just as its predecessor did because it's a story about women, Dwyer says. "We don't get to hear stories about women this way. Especially in musical theater it's usually a love story. You get to see this other side of what it means to be a woman in a man's world. You see those connections that the waitresses have with each other and that friendship. It's not about some guy. It's about living your everyday life and trying to get yourself out of situations that don't serve you. The last three bows in our show are women which I don't think has ever happened before."

The three lead female characters "have different dreams where they thought their life was going to be as opposed to where it is and what they still want out of life."

Waitress was a natural to turn into a musical, Dwyer says. "The movie was very whimsical. She would go to that place where she was making the pies and talking about the ingredients and there was this musical theme throughout the movie that every time she would bake that would play. I think that the movie always kind of sung to me and was just fantastical enough to be turned into a musical in a really successful way."

On stage, Dwyer (who bakes in her private life and says she loves to cook) works with food both real and fake. "I have to truly roll out a lump of pie dough while I'm singing and acting and its very interesting especially with a traveling show the temperatures and the weather change so much; we're in different theaters all the time. Certain theaters are a little bit warmer than other theaters or dryer or whatever and that completely affects the dough.

"Some days it’s super easy for me to to roll it out and I can roll it out before I ever even have to start singing and  other days I'm literally putting my entire body weight into this table."

We have two  wonderful prop people on the show. We have 1,000 props that they have to clean every day. They have to clean the plates every day and order enough food so we have all this stuff for our show so it’s pretty intense for them. I's pretty cool to see actual pie dough and actual flour on stage."

Dwyer believe this musical will attract a wide audience.

"Honestly I’m sure everybody there’s really something for everybody it’s sofunny it’s so moving it gives you everything that you desire if you wanted to feel all your emotions all at once. There's some really crazy kooky characters that will come in . And there are just these wonderful moments of human emotion.:

"It’s not just a story for women about women. It’s really moving and uplifting and hilarious. Even people who don’t like musicals like this one."

And sit close enough and you might have some flour blown out your way from the stage.

Performances are scheduled for January 29 through February 3 at 7:30 p.m. Tuesday through Thursday and Sundat, 8 p.m. Friday and Saturday and 2 p.m. Saturday and Sunday at the Hobby Center, 800 Bagby. For information, call 800-982-2787 or 713-315-2525 or visit hobbycenter.org or broadwayatthehobbycenter.com. $35-$155 plus fees.
KEEP THE HOUSTON PRESS FREE... Since we started the Houston Press, it has been defined as the free, independent voice of Houston, and we'd like to keep it that way. With local media under siege, it's more important than ever for us to rally support behind funding our local journalism. You can help by participating in our "I Support" program, allowing us to keep offering readers access to our incisive coverage of local news, food and culture with no paywalls.
Make a one-time donation today for as little as $1.