The Houston Symphony's 2022-23 season welcomes a new music director and and exciting lineup of programs. Photo by Jeff Fitlow
This week the Houston Symphony announced its 2022-23 season, and expect the drama, mama. The most significant event, of course, will be the new leadership of Juraj Valcuha. As the incoming music director, he succeeds Andres Andrés Orozco-Estrada, who is currently enjoying his farewell season with the organization.

The rising impresario has big ambitions for the upcoming year. Hallmarks of Valcuha’s programming include embracing programmatic themes that unify his multi-week appearances, exploring operatic repertoire in concert alongside great choral works from the symphonic repertoire, continuing to spotlight Houston Symphony musicians as soloists, and welcoming the greatest guest artists in the world to Houston.

The highlights are plentiful, and the drama extends from start to finish for the season, which begins mid-September with the gravity-defying Cirque de la Symphonie and Verdi's epic "Requiem" and closes with Stravinsky's oratory of "Oedipus Rex," a musical gem from his neo-classical period that harkens in style back to Mozart and Haydn while remaining rooted in the 20th century.

And in case that wasn’t enough, the Symphony continues with the soap opera-worthy planning through what it lovingly dubbed "scandal pieces," or programs that centered around a work whose premiere sparked a legendary scandal, including the suite from Bela Bartok’s 1926 ballet "The Miraculous Mandarin." This work’s expressionist plot induced booing and catcalling from the Cologne audience at its premiere, and subsequently led the mayor of Cologne to ban the work on moral grounds.

The second installment is a work that caused what is arguably the biggest scandal in classical music history: Stravinsky’s "The Rite of Spring." The ballet’s 1913 Paris premiere by Diaghelev’s Ballets Russes caused a riot, and Giacomo Puccini deemed it “the work of a madman."

Even Alexis Carrington would clutch her pearls with that lineup. Juraj Valcuha has appeared with Houston Symphony several times. Now, it will be his artistic home.
Photo by Michael Breyer
One of the signatures of Juraj Valcuha’s music directorship is his devotion to thematic programming. Songs of the Earth is the unifying thread for the February 2023 concerts. The two weeks of concerts include Mahler’s "song symphony" "Das Lied von der Erde (The Song of the Earth)" and "Itinerary of an Illusion," an orchestral work that uses Western musical idioms and instruments to express Chinese musical themes. It is followed by Debussy’s masterwork of impressionism "La Mer" and and Ravel’s "Mother Goose Suite," a Western work whose music evinces Ravel’s fascination with Japanese art and calligraphy.

“The programs are a dialogue between the cultures that come through in these wonderful pieces of music written for the symphony orchestra,” Mangum said.

Valcuha also makes a nod to the past years of Houston Symphony. He will pay tribute to one of his most illustrious predecessors as Music Director, Sir John Barbirolli, by conducting a program that the great British conductor created and conducted February 14 and 15, 1966 during his Houston tenure.

Of course, the season wouldn’t be complete without a performance (or three) from Artistic Partner Itzhak Perlman. Look forward to his Beethoven’s "Violin Concerto," a recital with his friend and artistic partner Rohan De Silva, and Mozart’s "Requiem Mass." And don’t forget the Houston Symphony Chorus. They are back and in full swing for several shows this season, and they will be part of Valcuha’s inaugural performance of the season.

“It's very exciting to see the full forces of the chorus back on stage. Juraj really wanted to be sure and have the entire Houston Symphony family for his first concerts here as music director,” Mangum said.

The chorus will lift their voices during Verdi’s "Requiem," Bartok’s "The Miraculous Mandarin," Stravinsky’s "Oedipus Rex," Mozart’s "Requiem," Holst’s "The Planets" and the dual holiday traditions of Handel’s "Messiah" and Very Merry POPS. 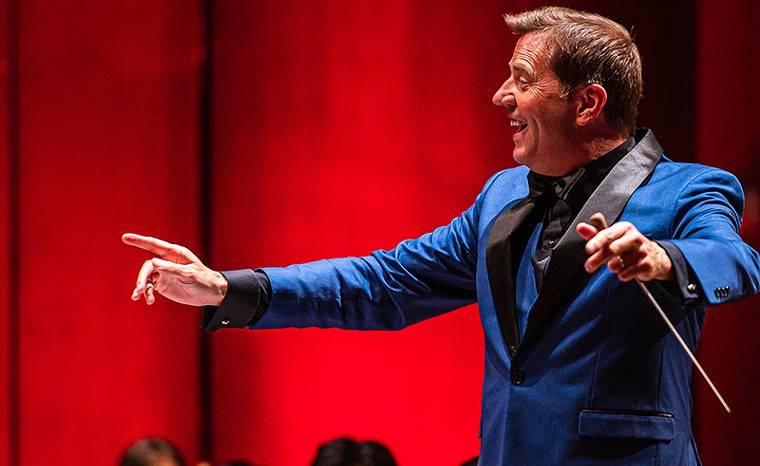 “I just hope that everybody will, after two rough years, want to come back and enjoy what we have to offer,” Mangum said. “It's exciting that we're welcoming a new music director, and the programming that he's bringing is incredibly innovative. I like that there are these moments that break through and cause us to focus. Music lovers won't want to miss it because we're pulling out all the stops,” Mangum said.

The full season is as follows:

The 2022−23 Classical Season
The 2022–2023 Bank Of America POPS Series
Season tickets for the 2022–2023 Season, including the Classical Series and the Bank of America POPS Series, are on sale now. For more information or to purchase, visit houstonsymphony.org or call 713-224-7575. Classical Series packages start at $138, and Bank of America POPS Series at $162.
KEEP THE HOUSTON PRESS FREE... Since we started the Houston Press, it has been defined as the free, independent voice of Houston, and we'd like to keep it that way. With local media under siege, it's more important than ever for us to rally support behind funding our local journalism. You can help by participating in our "I Support" program, allowing us to keep offering readers access to our incisive coverage of local news, food and culture with no paywalls.
Make a one-time donation today for as little as $1.