After nearly three decades of performing, Houston Chamber Choir shows no signs of slowing down. Photo by Jeff Grass Photography
“Words make you think a thought. Music makes you feel a feeling. A song makes you feel a thought." That quote from lyricist E. Y. Harburg, probably known by most people for his work in The Wizard of Oz, must have been rolling around in the head of Houston Chamber Choir's Founder and Artistic Director Bob Simpson as he began planning the 2022-23 season.

The Grammy Award-winning organization announced its upcoming season's themed, "A Heart for the Choral Art," which is brimming with variety, depth, and yes...many moments that will make listeners feel a thought. The eight-concert season will highlight the choir's vocal versatility, variety, and cultural relevance.

"It's an opportunity for us to open ourselves to the love of music that brought us into the work that we do with a heart for the choral artist. It expresses the whole source of what we are about by opening our hearts to the choral art and with the range of music that we're doing," Simpson said.

The group's past two seasons have been deeply affected by COVID-19, hence the 2020-21 theme "To Everything a Season," and 2021-22's "Sing Out the New Day." The first hinted to the idea that while things seemed dour during the COVID-19 outbreak, the pandemic won't always have the grip on the world that it once did. Biblical in nature, it contained a sliver of hope that suggested "this too shall pass." The following season's theme implied that the choir had found a way to deal with COVID-19 that still allowed it to return somewhat to a regular routine, as had much of society.

During those two years, the choir implemented a Digital Stage for virtual performances, launched the podcast With One Accord to stay connected with music aficionados, and took a variety of other protocols like rehearsing in open-air garages to maintain their own safety as well as that of audience members. With this year's "A Heart for the Choral Art," the organization takes a turn and leans inward on its passion for music.

"After our last season, which was step-by-step and hoping for the best, I realized that we're coming into a season now where we're far from wanting to predict the future and needing to always stay very vigilant so that we can once again return to an open-hearted quality of making music without worrying about protocols and making the kinds of concessions to live performances that we've had to do in the past," Simpson said. 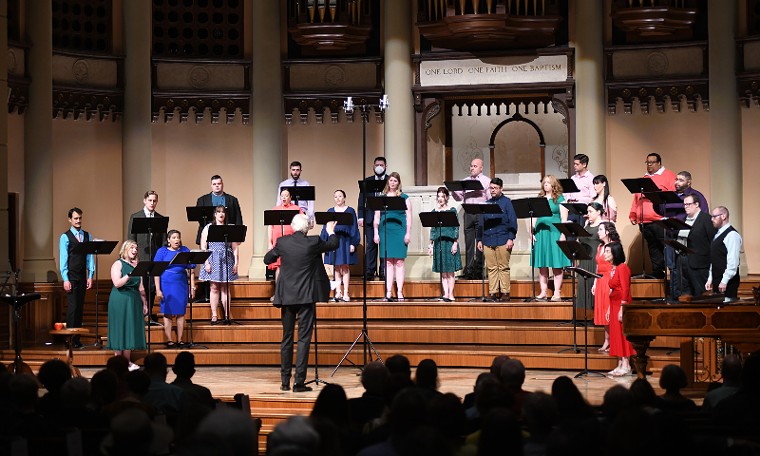 Even though the choir is composed of less than 30 singers, their voices saturate any performance space with grace, precision and oh-so-beautiful music.
Photo by Jeff Grass Photography
Indeed, the organization will present a wide spectrum of styles, featuring musical selections that will engage the audience while simultaneously underscoring the choir's diversity of performance capabilities and endless curiosity for all things music. The season offers an updated look to choral classics by English composer Ralph Vaughan Williams on the 150th anniversary of his birth year to under-appreciated gems by Black composers, a piece that addresses human-made harms against nature, and heartfelt Indie Folk music.

Of note, the upcoming year marks the return to Villa de Matel in Houston's East End and to Miller Outdoor Theatre. COVID-19 restrictions put a pause of the former location, while a series of scheduling conflicts prevented appearances the latter. Also of interest, the third concert, Desert Island Playlist, takes a step outside the norm by turning creative control outside of the organization. The choir will accept suggestions and poll fans for songs they would like to hear. Additionally, the season finale brings about a family affair, as Simpson's daughter-in-law's brother will join as the guest performer.

In true Houston Chamber Choir style, patrons will notice a decent sprinkling of collaborations, including partnerships with local musical groups and at least one guest conductor.

Fear not, those who prefer the more predictable fare. Regular performances like the holiday show in December and the spotlight on K-12 choirs for Hear The Future will remain.

Simpson promises that even though the choir is entering its 28th season, it rarely repeats songs in its repertoire.

"A very high percentage have been pieces that are not repetitions but are first time performances. We are constantly looking for new ground and new works to enjoy and those that allow us a variance at the widest possible range of the choral art for which we have such a heart," he said. 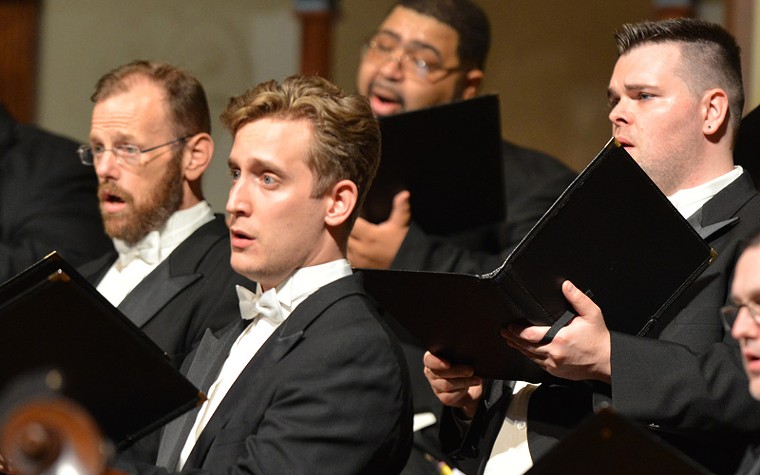 The Houston Chamber Choir opens its season with a festival concert in tribute to the great English composer Ralph Vaughan Williams, marking his 150th birthday. His ethereal "Mass in g minor for double choir" will be the centerpiece in a program that also features sacred and secular works by his mentors Charles Villiers Stanford and Maurice Ravel.

This Land is Your Land
7:30 p.m., Saturday, October 29 at Miller Outdoor Theatre

Jon Meacham and Tim McGraw remind us in their book, Songs of America, that the history of the United States — its struggles, politics, and successes — is embedded in our nation's folksongs. From Pre-Revolutionary calls for independence, to spirituals, Depression-era laments, and songs of protest, the Houston Chamber Choir will bring the voice of American history to the stage.

There are certain pieces that touch us so deeply that we would not want to be without them, even if stranded on a desert island. In this concert, the Houston Chamber Choir will perform some of its all-time favorites along with song requests from patrons for an evening of music with special meaning for all.

Christmas at the Villa - On this Day Earth Shall Ring
2:30 and 5 p.m., Saturday, December 10 and Sunday, December 11 at Chapel of the Villa de Matel
Guests: Treble Choir of Houston and Marc Garvin, guitar

The Houston Chamber Choir is coming home for the holidays as it returns after a two-year absence to the Chapel of the Villa de Matel for its annual Christmas concerts. The choir will once again be joined by the Treble Choir of Houston directed by Marianna Parnas-Simpson. Well-known classical guitarist Marc Garvin will join as a special guest. Gather with family and friends for this festive Houston holiday tradition.

Each year, the Houston Chamber Choir invites three outstanding school choirs from the Greater Houston area to be the special guests at its annual invitational choral festival, Hear the Future. This year’s three participating ensembles and their gifted directors include the following:
This free community concert gives audience members a chance to show their support and appreciation for the outstanding work being done by music educators and their talented singers. To further its positive impact on our region’s school choral programs, Hear the Future now includes a VIP Choral Clinic for eight high schools. This season’s clinic will be led by Dr. Jennaya Robison, director of Choral Studies in the Conservatory at the University of Missouri-Kansas City.

The Houston Chamber Choir joins the exciting new instrumental group Loop38 in the regional premiere of "Mass for the Endangered" by young American composer Sara Kirkland-Snider. A celebration and an elegy for the natural world, this extraordinary work is an appeal for greater awareness, urgency, and action. At once jubilant and reverent, "Mass for the Endangered" is a meditation on all that nature has to offer and what we can offer in return.

When considering choral music by Black composers, some think no further than spirituals, work songs, and gospel music. This concert broadens that view by presenting seldom heard works by Nathaniel Dett, Harry Burleigh, Florence Price, and others who believed that Black composers should embrace the spiritual but never be limited by it.

Singer-songwriter Sam Beam has performed sold-out concerts at New York City’s Radio City Music and venues throughout the world as Iron & Wine. In his first performance with a choral ensemble, he joins the Houston Chamber Choir to perform favorites from his seven albums.

Houston Chamber Choir's season tickets go on sale today. Performances are held at various locations. For more information, call 713-224-5566 or visit houstonchamberchoir.org. "This Land Is Your Land" and "Hear The Future" are free to attend. Season subscriptions for the six-concert option range from $50 to $200. Individual concert tickets will go on sale starting Friday, August 5.
KEEP THE HOUSTON PRESS FREE... Since we started the Houston Press, it has been defined as the free, independent voice of Houston, and we'd like to keep it that way. With local media under siege, it's more important than ever for us to rally support behind funding our local journalism. You can help by participating in our "I Support" program, allowing us to keep offering readers access to our incisive coverage of local news, food and culture with no paywalls.
Make a one-time donation today for as little as $1.