How Much is That Peruvian Hairless Doggie in the Mystic Lyon Window?

Artist Sharon Kopriva's Little Thor, made of papier-mâché and plaster, is coming to a Fifth Ward neighborhood that already has more than a few street dogs on the loose. Photo by Rick Wells
We can't exactly say that installation art space Mystic Lyon has gone to the dogs; they were already there. Located in Houston's historic Fifth Ward — at the corner of Mystic Street and Lyons Avenue (natch) — the neighborhood has more than its fair share of strays.

In fact, a couple of those street dogs adopted gallery curator/caretaker Emily Sloan, who uses the space as her studio and allows her rescues (Pearl, a terrier mix, and Cleo, a lab/pit mix) to hang out in the glass-enclosed display window that faces the street.

"It’s a favorite perch for the little one," says Sloan. "She seems to enjoy the warmth and people watching."

Pearl will have to give up that treasured spot with the next show coming to Mystic Lyon. "Canis Major" is a mixed media installation by Texas native Sharon Kopriva, who has exhibited in Mexico, Peru, China, Germany, Turkey, Greece, Spain, Cuba and India, as well as throughout the United States. 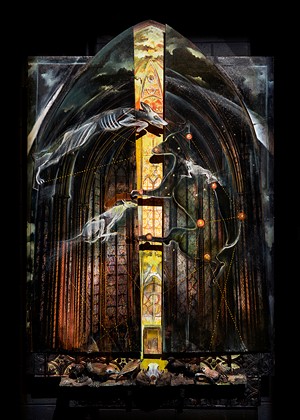 Canis Major by Sharon Kopriva, 75 inches x 48 inches x 11 inches.
Photo by Rick Wells
We'll see the return of Kopriva's massive Canis Major oil and mixed media painting, part of her "Dogs Without Hair" series that was inspired by the Peruvian breed that dates back to pre-Incan cultures. Or rather we'll see a high quality reproduction of the piece, because Kopriva tells us she plans to split the work right down the middle.

"I’m working on a background piece that has an image, a photo image and drawing on top of it of Canis Major, the constellation of stars," says Kopriva, who is putting the finishing touches on the project. I’m going to use that other piece, Canis Major the painting, split it in half to form two doors, like you’re looking in. Instead of yellow space there will be the whole constellation."

Kopriva says she's installing a trio of her papier-mâché and plaster dogs, one of them on a turntable, and is toying with the idea of a translucent white doghouse, though the muses may have other ideas. "Some of this is new territory. I’m having fun," says Kopriva, adding that Pearl is invited to join the installation anytime she wants.

"She can still sit there. I would love to have a real dog in there."

The installation will be viewable to passersby at all times and illuminated at night, introducing new audiences to the work of this world-class artist. Throughout the show's run, dog and animal-inspired programming has been planned including meditations for animal healing, a Gong Grant for an area dog support group, and an upcoming event hosted by Kopriva (date to be announced) that will include crafting for children and awareness for the neighborhood dogs.

Past works by Kopriva, who has been prominent in the local art scene since the landmark "Fresh Paint: The Houston School" exhibit at the Museum of Fine Arts, Houston in 1985, include skeletons, mummies, Catholic-inspired imagery, lush landscapes and tuber people. A concurrent exhibit, "Sharon Kopriva: Meditations, Migrations and Muses" is on view at Deborah Colton Gallery, 2445 North Boulevard, through February 23.

An opening reception with the artist is scheduled for February 9 from 6 to 9 p.m., remaining visible 24/7 from the street (or inside by appointment) through April 20 at Mystic Lyon, 5017 Lyons. For information, call 713-582-1198 or visit facebook.com/mysticlyonhtx. Free.
KEEP THE HOUSTON PRESS FREE... Since we started the Houston Press, it has been defined as the free, independent voice of Houston, and we'd like to keep it that way. With local media under siege, it's more important than ever for us to rally support behind funding our local journalism. You can help by participating in our "I Support" program, allowing us to keep offering readers access to our incisive coverage of local news, food and culture with no paywalls.
Make a one-time donation today for as little as $1.