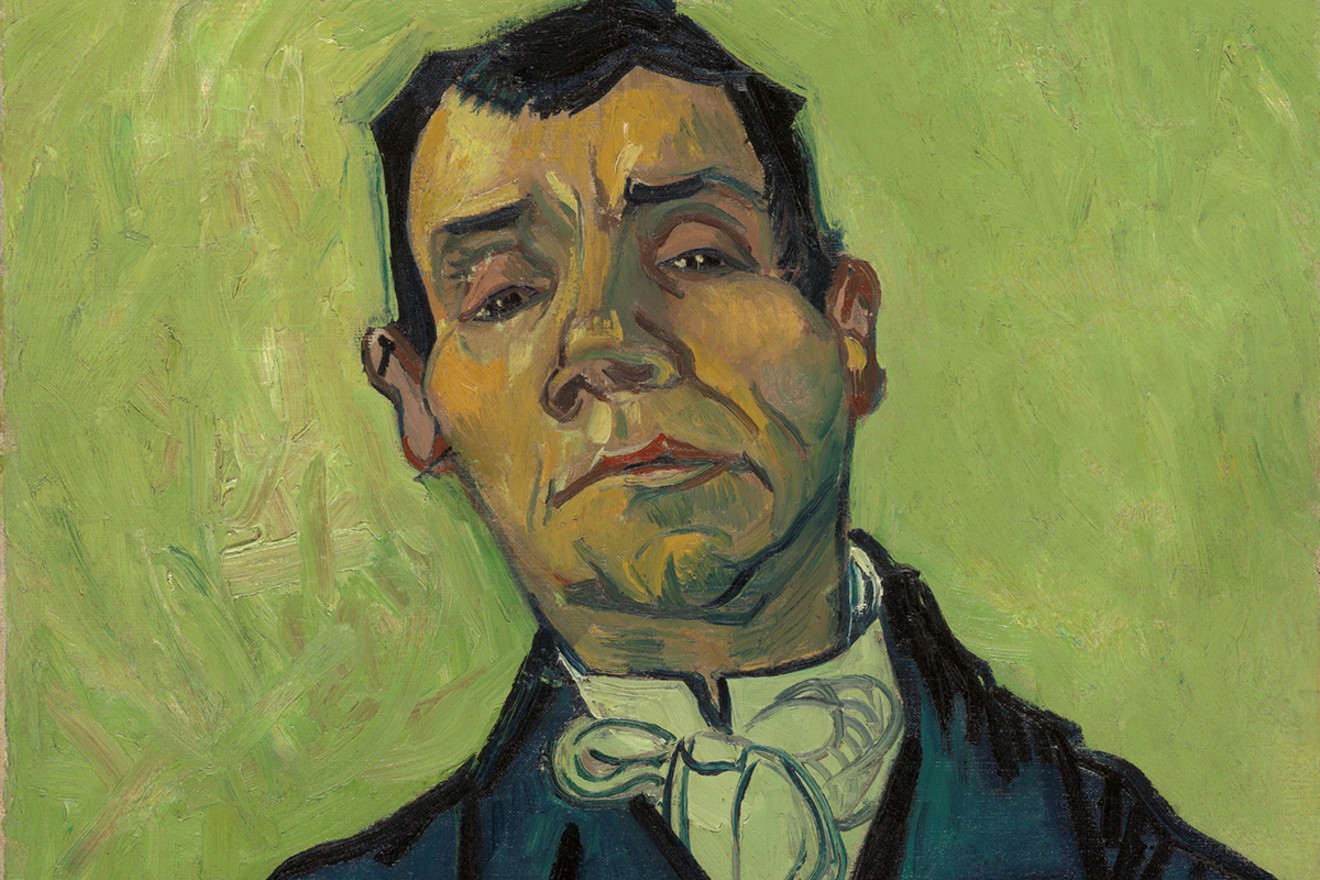 Vincent van Gogh, Portrait of a Man (detail), 1888. Van Gogh painted Joseph-Michel Ginoux, the proprietor of the Café de la Gare in Arles; Paul Gauguin was seated at the same table and painted a similar portrait at that sitting. © Photo by Kröller-Müller Museum, Otterlo, the Netherlands
Vincent van Gogh believed that a creative force animated all forms of life, and looking back at his brief but brilliant career as an artist, it's clear that the Dutch Post-Impressionist had tapped into his own "something of the eternal" in painting his portraits, landscapes and still lifes.

Through June, Houstonians can dive into the artist's rise and fall at the Museum of Fine Arts, Houston in "Vincent van Gogh: His Life in Art," a major survey that brings together more than 50 masterworks.

But van Gogh's story is actually a tale of two brothers. We've all had difference-makers in our lives and, for Vincent, it was his younger brother Theo. From his teens until early adulthood, Vincent floundered around trying to figure out what he wanted to do when he grew up: apprentice to art dealers, teacher, book seller, preacher, or missionary.

Until Theo, the more grounded of the two brothers, sat Vincent down and said, "You have to decide." But once Vincent made the decision that he was going to be an artist, it was as if the switch had been flipped.

"His learning curve was almost vertical," said David Bomford, MFAH's Audrey Jones Beck Curator of European Art, and Chief of Conservation, in a members' preview of the exhibit.

Vincent, whose drawings up until then had been rough and raw, attended classes, studied with other artists, and quickly mastered the art of drawing. He was always influenced by his surroundings and his first paintings from his time in the Netherlands were dark, depicting the peasants with brutal, almost grotesque faces.

Vincent often stayed with his parents or brother, and always was on the dole from Theo, who had carved out a successful career as an art dealer. Later in Paris, through his brother's gallery, Vincent met Degas, Seurat and other French artists. It was here that his paintings became infused with color and brightness. Later, moving to the south of France, he invoked the kingdom of light. Through it all Vincent sent hundreds of letters to his brother, with sketches of his works in progress, and more than 800 of Vincent's letters have been fully annotated and preserved at vangoghletters.org. 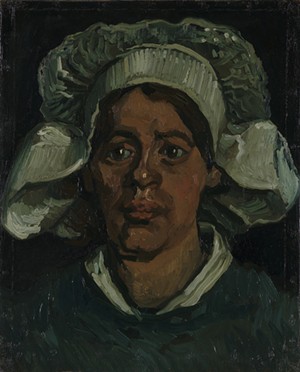 Vincent van Gogh, Head of a Woman Wearing a White Cap, 1884–1885.
© Photo by Rik Klein Gotink, copyright Kröller Müller Museum
In the MFAH exhibit, the very first room of the installation features replicas, but it's a key piece to understanding the van Gogh story. The artist was like a sponge, absorbing the architecture and landscapes of his time in Belgium, Great Britain, the Netherlands and France: Paris, Arles, Saint-Rémy-de-Provence, Auvers-sur-Oise. It shows how his style changed and morphed as he followed in the steps of the Impressionists while in Paris, adopting Pointillism and becoming influenced by his contemporaries.

Houston is the only venue for this major survey and viewing the works in print or online can't do justice; how many of us will be able to travel to the museums of Amsterdam, Otterlo and Paris to view the paintings? In person we can see the thick applications of oil paint, how his brush strokes evolved to small dots and then strokes, and how van Gogh's artistic swings moved from darkness to light and eventual madness.

Everybody will have favorites within the exhibit. I kept returning to The Old Church Tower at Nuenen (“The Peasants’ Churchyard”), where his father was buried; the side by side oil and chalk depictions of The Hill of Montmartre (the drawing was once thought to be a copy); the View of Saintes Maries de la Mer (with the rows of purple grapevine plants leading to a vanishing point); and the drawing Café Terrace on the Place du Forum (with a photo of the same scene painted at night).

By now everybody has heard that, in Vincent's final years, he began to suffer from bouts of anxiety and madness. In a row with his studio roommate Gauguin, he cut off part of his ear and presented it a brothel maid, causing Gauguin to flee the Yellow House forever. And how in 1889 Vincent voluntarily checked himself into a psychiatric hospital in Saint-Rémy-de-Provence. Vincent painted The Garden of the Asylum at Saint Rémy from that hospital in May of 1889; the oil is on view in this exhibit and the light literally sparkles from the canvas.

A little more than a year later, Vincent's relationship with Theo took one final turn. The artist, who had never achieved commercial success during his lifetime and always depended on his brother's generosity, grew fearful that Theo — who now had a family — would no longer be able to support him. Riddled with sadness, loneliness and uncertainty, Vincent shot himself in a wheat field and died two days later. Have your picture taken in this forced perspective vignette, then continue energizing your social media feed with all the other photo ops in Van Gogh Up Close.
Photo by Susie Tommaney

Visitors of all ages should not overlook the Van Gogh Up Close immersive exhibit. Anybody entering the space will feel a sudden jolt of that creative energy. It has forced perspective picture stations, photo opportunities where viewers can stand (or place their faces) within the scenes of famous paintings, replicas of the artist studio, portrait marker boards and, for the younger set, buttons to push and cartoons to watch. Adults of all ages will find themselves enthusiastically seated at a coloring table, and a portrait wall has spaces for visitors to insert their own self-drawn portraits. An electronic version of Starry Night exists here, where a touch of the finger will make the sky rotate or branches grow on the tree; while in the corner guests can don an apron and become immersed in a Parisian cafe.
"Vincent van Gogh: His Life in Art" is a major collaboration with the Van Gogh Museum, Amsterdam; and the Kröller-Müller Museum, Otterlo; which, together, hold the largest collections in the world of Van Gogh’s work. They each lent pieces to the MFAH for this exhibit. Significant works also traveled from Musée d’Orsay, Paris; Wallraf– Richartz Museum, Cologne; the Virginia Museum of Fine Arts, Richmond; Art Institute of Chicago; the Dallas Museum of Art; McNay Art Museum, San Antonio; and private collections.

Information about related events can be found here.
KEEP THE HOUSTON PRESS FREE... Since we started the Houston Press, it has been defined as the free, independent voice of Houston, and we'd like to keep it that way. With local media under siege, it's more important than ever for us to rally support behind funding our local journalism. You can help by participating in our "I Support" program, allowing us to keep offering readers access to our incisive coverage of local news, food and culture with no paywalls.
Make a one-time donation today for as little as $1.