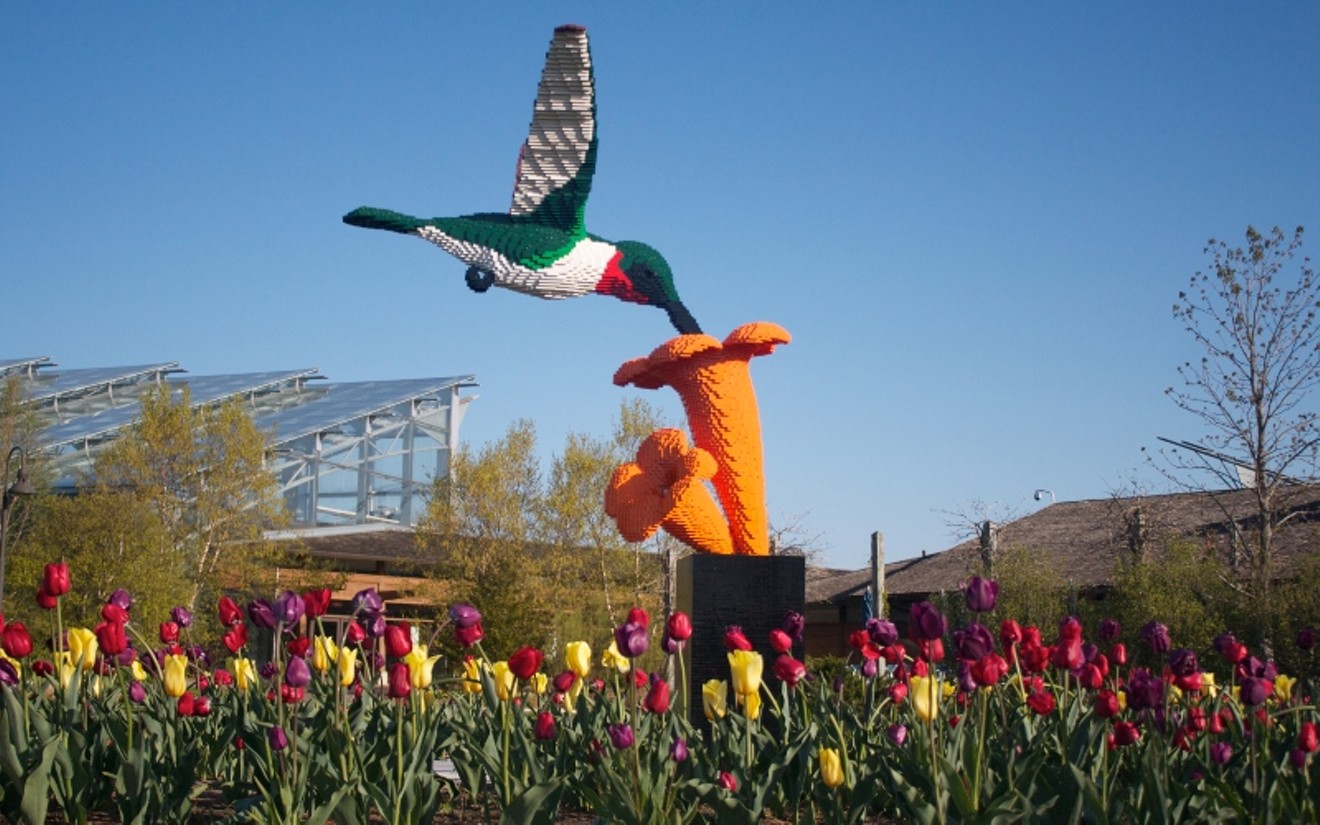 LEGOs and nature really go hand-in-hand when you think about it. As long as there's a lot of glue and lacquer. Photo by Sean Kenney
Brickheads, get ready. There’s about to be a don’t-miss-it LEGO display coming to Houston Botanic Garden starting Saturday and running through February 19, 2023. Sean Kenney's Nature Connects Made with LEGO Bricks is an award-winning exhibition that uses nature-inspired works of art made from everyone’s favorite childhood assembly toy to explore the balance of ecosystems and mankind’s relationship with nature.

Produced by Imagine Exhibitions, Nature Connects depicts important topics that Sean Kenney, a New York-based artist, holds dear, from protecting animal habitats, to planting a garden, to using a bike instead of a car.

“LEGOs are such an approachable medium. We've got problems with the environment, but LEGOs make it less austere. We're all part of nature, whether we want to admit how urbanized we are or not. We occupy land, we're part of the food chain, and we feed plants every time we breathe out. We're intrinsically connected with nature, and I thought this art would be a fun way to talk about that,” Kenney said.

It's part and parcel for the mission of Houston Botanic Garden, an organization that turns two years old this weekend.

“The reason that we're partnering with Imagine Exhibitions on Nature Connects is because these LEGO sculptures are nature-focused, and so everything in the exhibition are pieces that tell the story of the importance of biodiversity and ecosystems,” said Claudia Gee Vassar, Houston Botanic Garden’s president. “You get to see a little bit more about these different plants and creatures. There's orchids, lilies, butterflies and other pieces as well on display. By placing them in our Susan Garver Family Discovery Garden, it will help people discover our plant exhibits, fall in love with all of the different kinds of plants, learn about how they can plant in their own gardens for pollinators, and help care for our planet through creating healthy ecosystems through the power of biodiversity.” 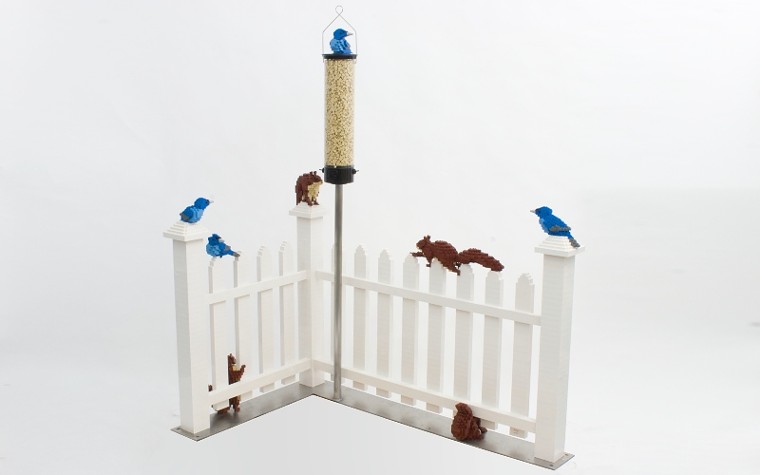 Hey, squirrelfriend!
Photo by Sean Kenney
Nature Connects is an amusing way to bring people to the Houston Botanic Garden, which opened during a pandemic and, thanks to its mostly outdoor setting, is still one of the safest – and most educational ways – to spend free time.

The LEGO displays come in a variety of animals and plants in differing scenarios. It shows of the variety of things that can be made from these very versatile, very tiny building blocks.

“LEGO is a medium, just like any other. It's like paint. It's like a pencil. You can make anything with it. As I started creating art with LEGO bricks, I was really surprised by their popularity…the number of people that came to it because of their love of LEGO but then stayed with it because they liked what I did. Some might ask why I use LEGO? I ask why not? It's fun,” Kenney said.

He mentioned that each piece of the 15-part installation takes painstaking effort to create.

In order to come up with each one, it’s a try-try-and-try-again method that use both his hands and a computer. And it involves a lot of glue, too, for structural sound.

“I have to glue all the pieces together as I go. I can't just build the sculpture and then say, ‘Oh, that face looks terrible. Let me take it apart.’ It's not like that. So I have to build it or design it and either physically or digitally tear it apart and put it back together again over and over and over until I've got it the way I like it. Then, once that happens, I've got a prototype that I can then make a copy of with my glue as I go,” Kenney says

His glue game is on point, too.

“I use industrial solvents. It's the kind of stuff you'd have on the pipes in your house. It’s similar to how people make fish tanks so the aquariums don't burst open at the seams and the water comes down,” he detailed. 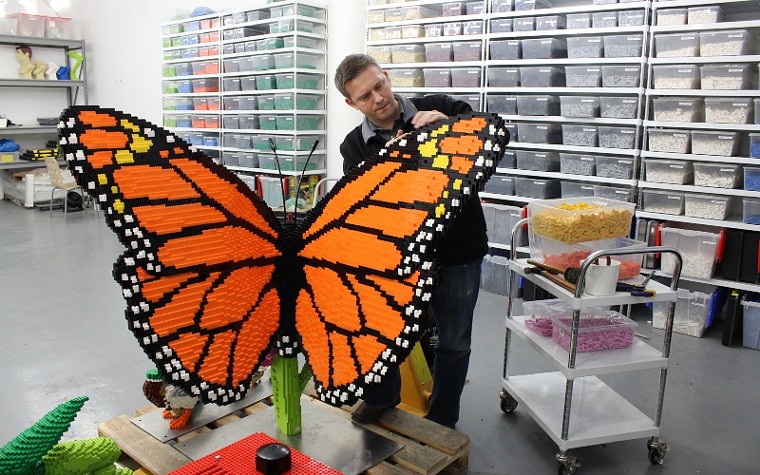 Notice the endless tubs of legos in the background? That's how the magic happens.
Photo by Sean Kenney
Since the LEGO sculptures are so uniquely shaped – and glued into solid form – they require special shipping that is, in a word, demanding.

“They end up going into custom built traveling exhibition crates, which I've had manufactured by a fine art crate manufacturer in New York City. Every single one of those is a big wooden box with foam fittings inside and big beams that hold the thing in place, so that it can be transported around. The crate and sculpture together weigh probably half a ton. You've got to get forklifts and usually one to two full sized semis to move everything across the country,” he said.

When those monstrously large crates do arrive and the sculptures finally put in place, there’s another element Kenney had to plan for: that large star our planet orbits.

“Plastic and the sun don't get along. If you've ever seen a water bottle that's been left astray, it becomes yellow and brittle. So I actually lacquer each statue with a UV protected layer. It is not unlike the kind of treatments that are put on the outside of a car because cars have a lot of plastic components as well. I worked with a specialist based in Connecticut who is the only person in the world that I trust to do this properly,” Kenney said.

The lacquer isn’t only for the sun. There’s also bugs that have to be swept away from the statues. Kenney says it all works together though.

“I'm still dealing with weather and wind and rain and spider webs and all that stuff. If this was just in an art gallery, I wouldn't have to deal with that. But it's not the same because a big part of the fun of the exhibit is that you get to wander around in the beauty of the botanical garden experiencing nature,” he said. “My art is all about nature. It's this nice kind of synergy that you wouldn't get if you were just with your hands clasped behind your back in a gallery somewhere.” 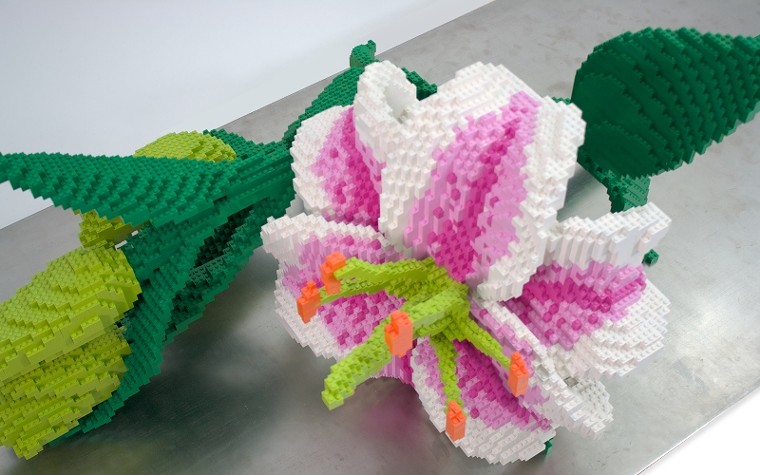 Teeny, tiny LEGO bricks snap together to create this piece of beauty.
Photo by Sean Kenney
While working with so many LEGO blocks, it’s natural to question if he’s ever stepped on one.

“I'm big on occupational health and safety regulations, so we all wear shoes here in the studio,” he replied.

Kinney thinks there’s something for everyone to gain from visiting the sculptures and Houston Botanic Garden.

“There's a lot that we can educate people about when it comes to nature. I think because LEGO is such a draw, it makes it an easy entry point,” he said.

Explore Sean Kenney's Nature Connects Made with LEGO Bricks, open daily to the public from 9 a.m. to 5 p.m. at the Houston Botanic Garden, One Botanic Lane. For more information or to purchase tickets, call 713-715-9675, ext. 100 or visit hbg.org. $8 - $15.
KEEP THE HOUSTON PRESS FREE... Since we started the Houston Press, it has been defined as the free, independent voice of Houston, and we'd like to keep it that way. With local media under siege, it's more important than ever for us to rally support behind funding our local journalism. You can help by participating in our "I Support" program, allowing us to keep offering readers access to our incisive coverage of local news, food and culture with no paywalls.
Make a one-time donation today for as little as $1.