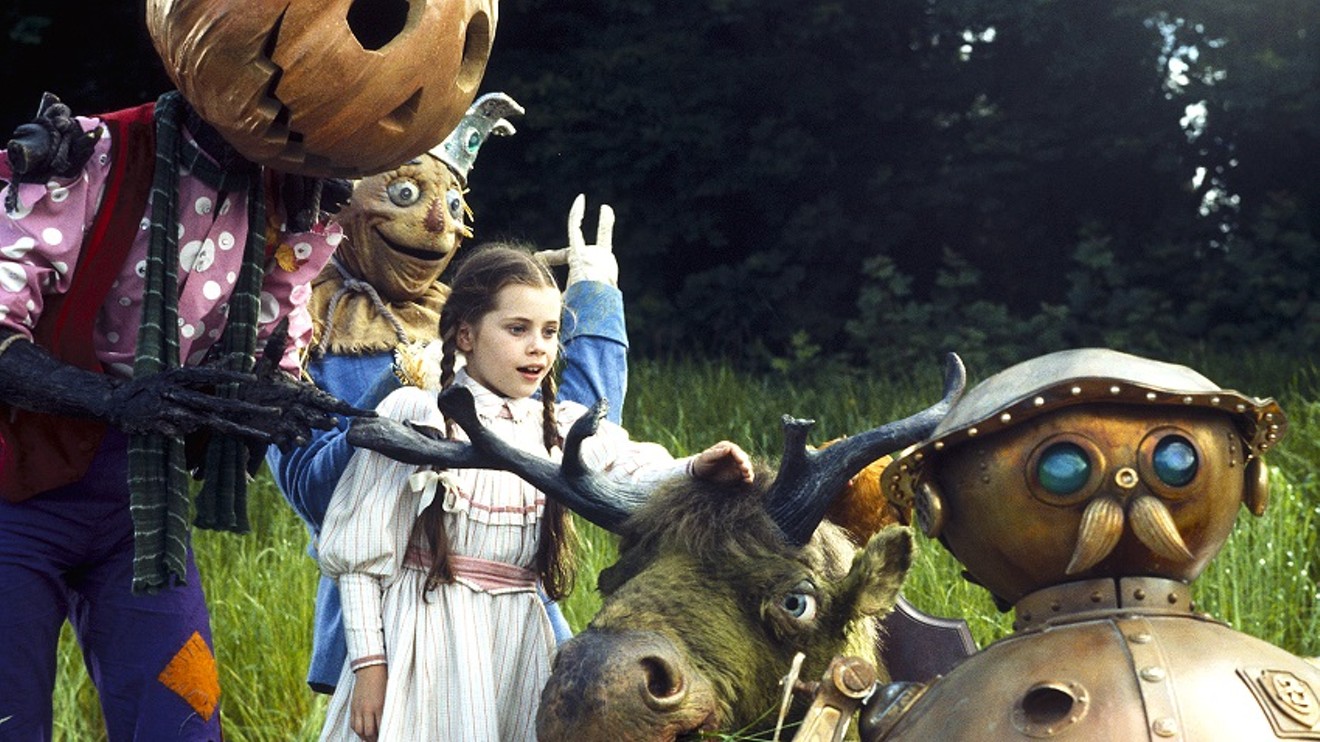 Hell is for children. Walt Disney Studios
It may seem inconceivable today, given the studio’s tentacular hold on cinema properties, but for a while there, Disney wasn’t doing so hot. The studio's 1990s heyday, marked by films like The Little Mermaid, Beauty and the Beast, and The Lion King, was referred to as the “Disney Renaissance” because the company spent most of the previous three decades releasing lackluster animated efforts (The Aristocrats, anyone?) and misguided live-action flicks starring the likes of Dean Jones or Joe Flynn.

What a long, strange, penis-laden trip its been. Next month sees the arrival of Disney+, the studio’s shiny new streaming service. Earlier this week, they announced what will be available on the network. It’s … a lot, and includes hundreds of movies and TV shows going back to the 1940s but also Star Wars, Pixar, the MCU, and all 30 seasons of The Simpsons.

But if you’re like me – meaning either you remember the dark days of The Shaggy D.A. and The Apple Dumpling Gang Rides Again or you have kids – there’s one particular movie announced that’ll either have you steepling your fingers in gleeful, Burns-ian anticipation or reaching for the Lexapro.

I’m talking, of course, about Return to Oz. Released in 1985, the movie picks up a few months after the events of 1939's The Wizard of Oz (perhaps you've heard of it), and sends Dorothy Gale (Fairuza Balk) back to the land of witches and flying monkeys.

“Swell,” you might think. “Here’s the chance for a new generation to experience the wonders of Oz and for Dorothy to reunite with her dear friends, including the Cowardly Lion, Tin Man, and Scarecrow.”

Hold that thought, because we soon find out the Lion and Tin Man have been turned to stone, and the Emerald City is in ruins, thanks to the machinations of the evil Nome King (Nicol Williamson). The Scarecrow, we later learn, has merely been kidnapped and magically transformed into an ornament. Pretty heavy stuff, but let's go back to the beginning, which is awful in its own way.

Yes and no. Dorothy made it back home, sure, but she's having trouble sleeping and eating and is clearly suffering from PTSD. Auntie Em and Uncle Henry think the young girl is hallucinating, so they send her to a hospital where a doctor (also Williamson) preps her for electroshock treatment.

Electro. Shock. Treatment. Did I mention Dorothy is 11 years old? Fortunately, lightning strikes the hospital before they throw the switch (irony!), but the image of Balk in restraints is still pretty upsetting.

That’s how the movie begins. Buckle up, my pretties.
“At least she still has her trusty pal Toto with her, right?”

Wrong. Perhaps the luckiest recurring character from Wizard, Toto misses the boat entirely this time around. Instead, Dorothy is accompanied back to Hell Oz by “Billina,” a chicken that acquires the ability to talk during their journey.

Ridiculous? Perhaps, but the talking chicken ends up being the mildest perversion of nature Dorothy encounters in Return. More importantly, Billina comes in handy several times, helping Dorothy out of an early jam (see below) and proving instrumental in her final confrontation with the Nome King.

"If the Emerald City is destroyed, does Dorothy at least reconnect with the Munchkins and the Lollipop Guild?”

You wish! The first creatures Dorothy encounters after the apparent Medusa-ing of her old friends are the Wheelers. They're the most intimidating sort of biker gang, in that they're actually bikes (or at least, dudes with wheels for hands and feet).

She and Billina escape and meet Tik-Tok, who's kind of like Twiki from Buck Rogers in the 25th Century if Roger Myers Jr. "steampunkified" him by 10 percent. Don't be fooled by his deceptively rotund appearance and existential despair, however. Tik-Tok also turns out to be a straight-up badass who cleans the Wheelers' clocks (sorry) and proves his usefulness when encountering Princess Mombi.

“Oh, a princess! Surely she’ll help the young woman on her quest?”

Are you not paying attention? Mombi is Oz’s version of Buffalo Bill from Silence of the Lambs, only she collects heads from young women instead of their skins. She wants Dorothy’s head as well, but is thwarted when Dorothy steals Mombi's "Powder of Life" and reanimates a moose-headed sofa creature called the Gump and flies away.

I'd be remiss if I didn't mention that the group is joined at this point by one Jack Pumpkinhead, because nothing says “friendly traveling companion to children” like an animated skeletal construct that looks like the freaking Headless Horseman.

Sort of? I honestly don’t know how terrifying the Nome King’s death will be to modern children. Claymation is a pretty quaint concept for kids who regularly murder each other online in 4K-rendered environments. That said, the effects here are more akin to Frank Zappa's "Baby Snakes" than Gumby, and hearing the rock people moaning "POISON" as they melt back into the walls is, well, freaky.

It’s also pretty convenient that the Nome King is allergic to eggs, and that one of Billina's proves to be his undoing. It explains why chickens are forbidden in Oz (though normally I'd suspect the work of the beef industrial complex), but really, who wouldn't use their hypothetical totalitarian powers to outlaw anything that endangered (or even annoyed) us?

All you bastards who watch videos on your phones with the sound on will be the first against the wall when I'm declared Dear Leader, is what I'm saying.

Return to Oz is reportedly more faithful in tone and weirdness to L. Frank Baum’s original novels than 1939's Wizard of Oz. I’ve never read them, so I can’t speak to that, but what I can point out is how it's more or less in keeping with the decade's trend of traumatizing “children’s fare." Maybe it was to prepare Gen X kids for the inevitability of nuclear war, but the 1980s were rife with unsettling efforts: Something Wicked This Way Comes (Mr. Dark!), Dark Crystal (Kira getting stabbed or the life-draining, take your pick), The Never-Ending Story (adios, Artax), The Secret of NIMH (sayonara, Nicodemus) … I could go on.

Disney+ goes live November 12. Your kids have a little less than a month to enjoy their childhoods, in other words.
KEEP THE HOUSTON PRESS FREE... Since we started the Houston Press, it has been defined as the free, independent voice of Houston, and we'd like to keep it that way. With local media under siege, it's more important than ever for us to rally support behind funding our local journalism. You can help by participating in our "I Support" program, allowing us to keep offering readers access to our incisive coverage of local news, food and culture with no paywalls.
Make a one-time donation today for as little as $1.