Race on the Main Line: White Guy on the Bus With Dirt Dogs Theatre Co. 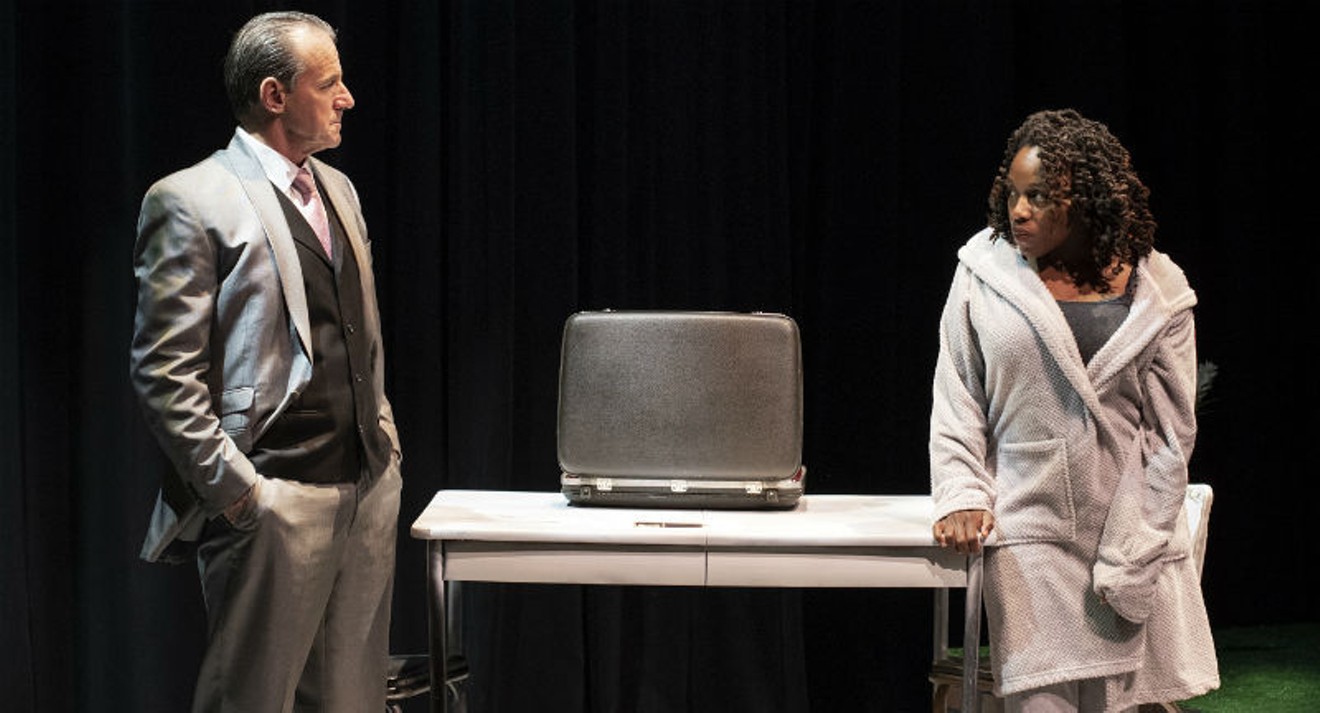 Kevin Daugherty as Ray and Crystal Rae as Shatique in White Guy on the Bus, a Dirt Dogs Theatre production. Photo by Gary Griffin

Playwright Bruce Graham takes the subject of race and twists it deftly so it becomes a noose.

What begins as white liberal political correctness suddenly springs into privileged revenge. How this occurs seems to happen between scenes that overlap or time shift. Some things change, some do not. There's a sudden reversal so swift yet decisive that you think you missed the connection, but it's only Graham playing with you, upsetting your conventions. But underneath swirls that inky eternal problem that is so timely and thorny right now.

What begins as a sociology lecture – four very privileged white people drinking wine on the veranda of their suburban Philadelphia house and discussing their lives – soon veers into mysterious territory when Ray (Kevin Daugherty), a successful business analyst, takes a weekly bus trip into the inner city. His seat mate is struggling black mom Shatique (a most magnificent Crystal Rae), who warms up to this most improbable passenger, the only White Guy on the Bus. We see her cutting coupons and then defensively moving her purse away from him. A bond develops between them, or will that become a sinister business arrangement? I can't reveal the outcome without depriving you of the enjoyment of discovery. There are things best left unsaid.

But Graham says most when he's being indiscreet. Wife Roz (a prickly Elizabeth Byrd Shipsey) teaches in the inner city. She's been recognized for her work with young black kids who are at the bottom of every level imaginable, and she loves what she does. She has a betting pool with fellow teachers for when she'll next be called “white bitch” by her students – and those are her favorite ones. She sees things clearly and faces them honestly, which puts her at odds with Molly (Olivia Swasey), young wife of Christopher (Dayne Lathrop), a doctoral student, who teaches in tony Bryn Mawr. Molly loves what she does too, only she has no black students or any connection to that world. Roz likes to buffet the naive Molly.

Ray's uneasy. He wants out. He wants to sell his business and move. He antsy for change, and Daugherty plays him with an edge of anxiety and world-weariness. When on the bus, he's open to Shatique, less guarded, so we think at first. She's wary at first, too, but this white guy sitting next to her isn't so bad. He seems to care about her problems: going to school, paying the mortgage, raising a child, working two jobs. Our prejudices kick in, slyly nudged by Graham. Is this the beginning of an affair? A way out for both of them? This is not the play to jump to conclusions. What comes next isn't on the radar. Fasten your seatbelts.

Dirt Dogs overlays White Guy with chilling clarity. Director Ron Jones keeps it moving steadily through Malinda L. Beckham's various settings of garden, living room, and bus, of course. Trevor B. Cone's sound work is just below the surface, ominous and thrumming on low. The actors are all fine, but it's Crystal Rae's Shatique who burrows under our skin. And it's the small things she does, little throwaway moments or a line reading that rings so true. Shatique's unaware of what race is about to do to her. Rae delivers an especially poignant performance. It emerges in a torrent and we are swamped in admiration.