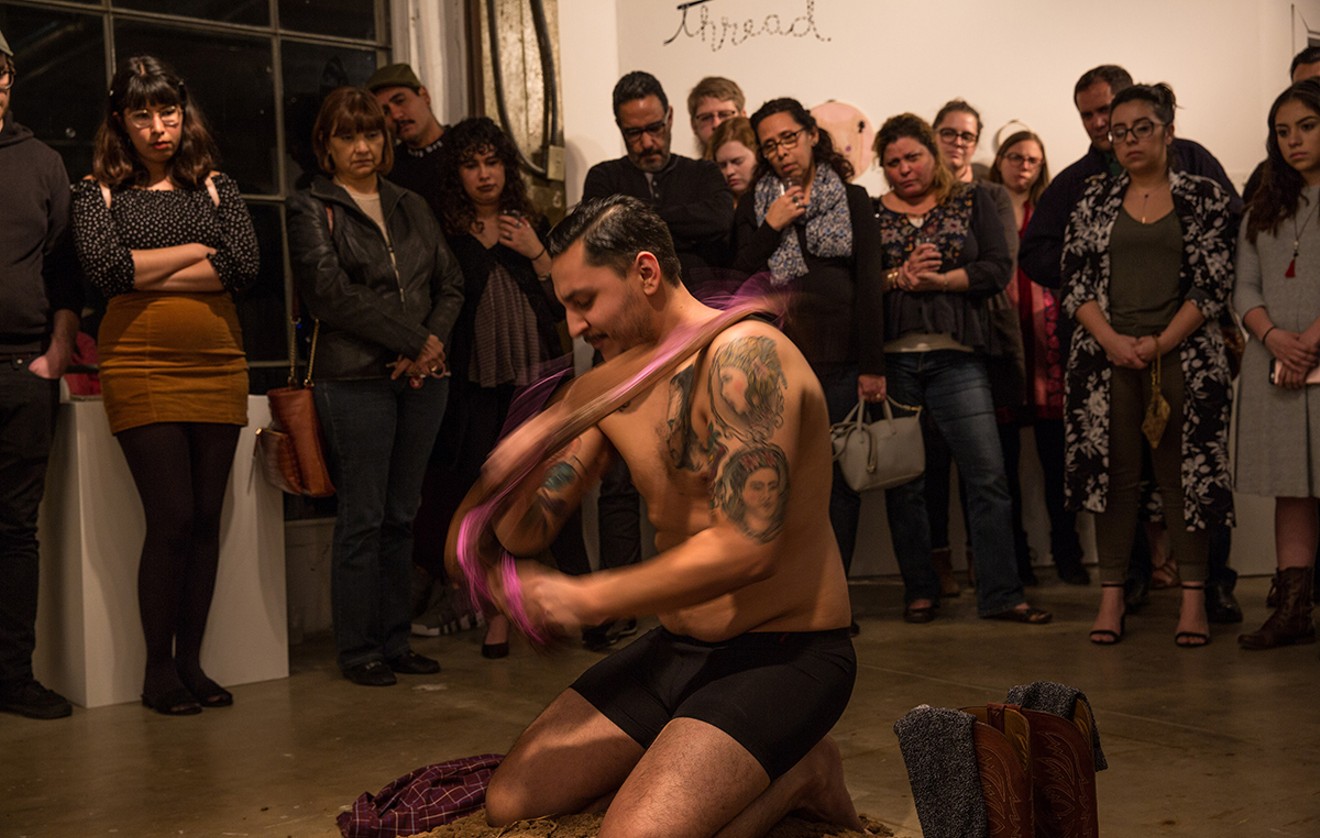 Sin los Callos en el Mano (Without the Calluses in the Hand), a 2018 performance by San Antonio artist Jose Villalobos. Photo by Andrea Rampone
The Lone Star State is the land of cowboys and wildcatters, J.R. Ewing and Walker Texas Ranger. So how to reconcile being a gay Latino in the heart of all that white male machismo? Performance artist Jose Villalobos deals with those sometimes conflicting identities by calf-roping his own body on a public stage or parading through the streets of San Antonio, bedazzled in Elvis-worthy fringe, dragging a dozen cowboy boots on a leash. Or, as in the performance shown above, he'll strip down to his undies and self-flagellate in a demonstration of both suffering and strength.

What's it all about? Villalobos is one of dozens of performers jetting in from all over the world to participate in the biennial Experimental Action Performance Art Festival, bringing three days and nights of groundbreaking acts that take intentional and calculated risks. 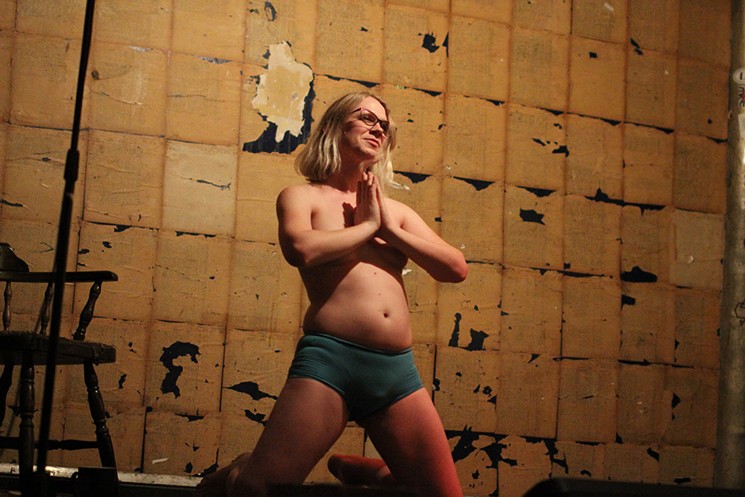 Cassie Mira, a Houston-based trans artist, will explore trans identity and the experience of having a trans body.
Photo by Holy Moment Photography
"If people are easily offended, this isn’t the best place for them," says Julia Wallace, co-founder and director of the festival. "But people who want to have an adventure and experience things out of the ordinary, it’s good for them. There won’t be anything antagonizing."

Wallace says there is nudity, but nobody will be pushing those boundaries enough to violate audience members. "We do want to welcome people who haven't experienced performance art before." 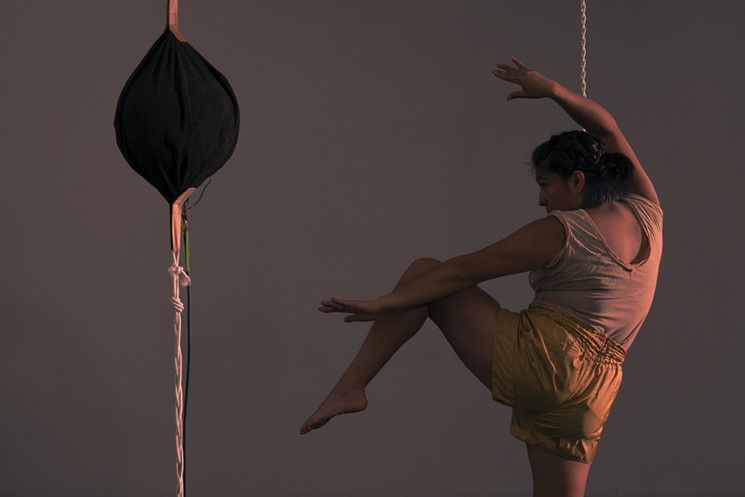 Chicago-based artist and self-described "social strategist" Marcela Torres often incorporates scenes from MMA matches, the octagon and shadow-boxing in her performances.
Photo by Jesse Meredith
ExA is led by a team of artists and calls on performers from all levels; even emerging talents can take part either under the spotlight or as volunteers. Wallace tells us that they're very much about strengthening and nurturing Houston's art scene and fostering community.

With artists hailing from Turkey, The Netherlands, Germany and Chile, as well as from all over the United States, putting on a festival of this scale sounds like a logistical nightmare, though one of Wallace's secret weapons comes in the form of housing.

"It's one of the cool things about this festival. We are very intentionally focused on creating a short term community for the festival so all of the artists coming in town are living communally and having communal meals," says Wallace. "So local artists are getting to exchange ideas and bond with the artists; there are lots of opportunities for volunteers to come be a part of the short term community as well." 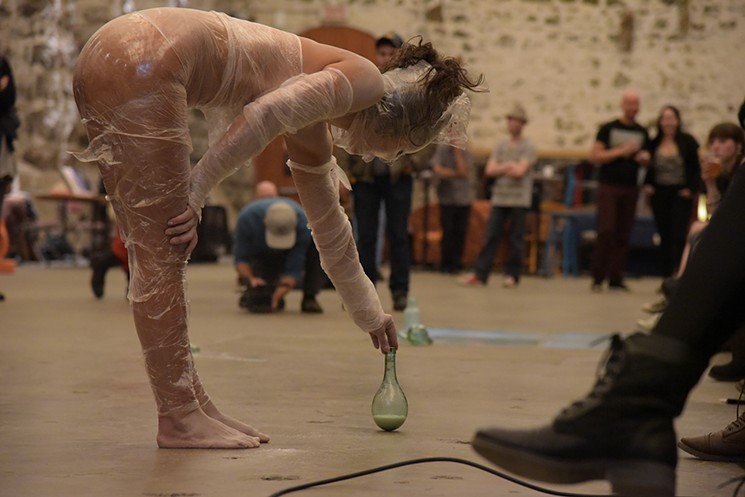 Simla Civelek, an artist from Turkey and Canada, has planned a very intimate performance for this year's festival.
Photo by Valérie Lavoie and Art Nomade
Wallace says that international artist Simla Civelek is going against the grain this time around. "It's not even going to be documented," says Wallace. "She's doing something very different than traditional performance. Very intimate, one on one, almost secret performances throughout the festival."

The whole shebang kicks off February 20 at notsuoH, where owner Jim Pirtle ("he acts like a social sculpture already") will take small groups upstairs to experience his installation. Festival performances take place over three nights at two locations, with different acts each night.

"I highly suggest coming to the whole thing even though it’s quite a commitment. It’s really unlike everything else; it's very ambitious," adds Wallace.


"It’s really unlike everything else; it's very ambitious." — Julia Wallace