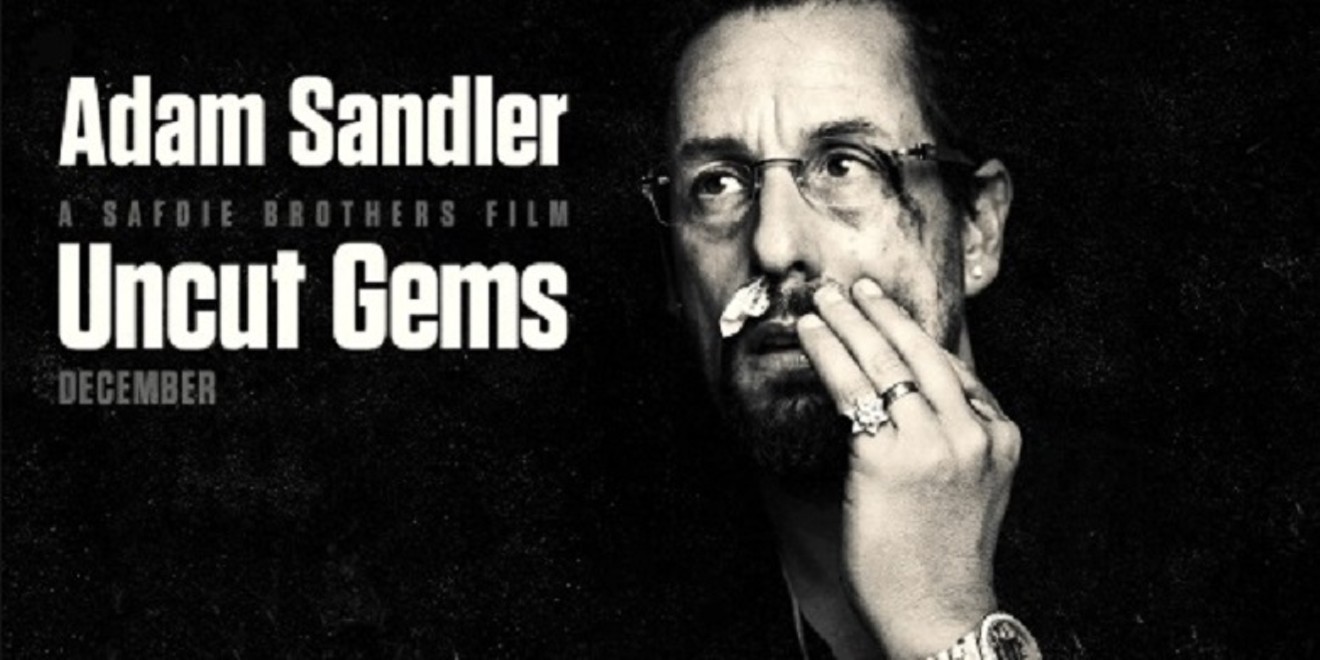 Describe This Movie In One Casino Royale Quote:

LE CHIFFRE: Tell them I've got the money.


Brief Plot Synopsis: After taking a deep cut from gambling losses, a jeweler seeks clarity and the confidence to color his outlook by selling a high-carat black opal.

Rating Using Random Objects Relevant To The Film: 4.5 Furbys out of 5.

Better Tagline: "Why so tense, guy?"

Not So Brief Plot Synopsis: Howard Ratner (Adam Sandler) may have gotten himself in over his head, what with being in debt to a loan shark over gambling debts and trying to keep a jewelry business afloat. No one, not his wife, not his mistress ... not even his kids, can give him peace of mind. So what can? Perhaps an uncut, 600-carat Ethiopian black opal that Howard plans to auction for a million dollars.


"Critical" Analysis: Here's a thought experiment: consider the arc of Adam Sandler's career absent the early successes of movies like Billy Madison and Happy Gilmore. Would struggling early on have forced him into seek out more challenging opportunities? Would an inability to easily produce lucrative crap like Grown Ups and I Now Pronounce You Chuck and Larry mean his performances in Punch-Drunk Love and Uncut Gems would be the norm instead of outliers?

It's a question that doubtless keeps him tossing and turning on his Scrooge McDuck-sized pile of money every night.

As with their previous film Good Time, the brother-directors Josh and Bennie Safdie have a wonderful gift for capturing desperate lives spinning even further out of control. Howard Ratner isn't as marginal a character as Connie Nikas, but he's similarly carried along by the consequences of events he himself instigated. In Howard's case, his compulsive gambling has put his livelihood — and his life — in danger.

This debt propels Howard into making progressively more disastrous decisions, and the Safdie's frenetic direction, coupled with Darius Khondji's (Se7en, The Lost City of Z) harsh cinematography and Daniel Lopatin's off-worldly score, makes for a harrowing experience even before the discordant background noise and overlapping dialogue.

Really, every Safdie Brothers movie should come with a promotional A24 paper bag to hyperventilate into.

Rounding out the cast of exasperated planetoids in Harry's orbit are one-foot-out-the-door wife Dinah (Idina Menzel), brother-in-law Arno (Eric Bogosian, who also happens to be the loan shark threatening his kneecaps), and Howard's assistant Demany (Lakeith Stanfield), who recruits clients for Howard and is responsible for landing NBA superstar Kevin Garnett, the whale whose actions kick off the widening gyre of chaos that envelops Howard.

And while Sandler's performance is something, Garnett's may be even more impressive. The former NBA MVP (Uncut Gems takes place in 2012, when KG was still with the Celtics) is a natural in front of a camera, and concludes his arc with a surprising amoung of self-awareness and introspection. When you add Julia Fox, playing Howard's savvier-than-expected girlfriend/saleswoman, you get a movie stupid with great supporting roles.

But most of the attention will focus on Sandler: on how he delivers another powerhouse performance, and one that's almost wholly dissimilar from PDL's Barry Egan. It leads one to ask: does Sandler only have it in him to produce like this every 15-20 years? Or could he do it anytime he felt like it and just chooses not to? Which is more frustrating?

Back in 2002, Roger Ebert wrote, "[Sandler] can't go on making those moronic comedies forever, can he?"  Clearly, he can. The question after the accolades he's receiving for Uncut Gems will be, will he want to?

In unrelated news, Hubie Halloween — starring Sandler, Kevin James, and Rob Schneider — comes out next year.
KEEP THE HOUSTON PRESS FREE... Since we started the Houston Press, it has been defined as the free, independent voice of Houston, and we'd like to keep it that way. With local media under siege, it's more important than ever for us to rally support behind funding our local journalism. You can help by participating in our "I Support" program, allowing us to keep offering readers access to our incisive coverage of local news, food and culture with no paywalls.
Make a one-time donation today for as little as $1.