How Soon is "Too Soon" for TV Comedy to Address Tragedy and Trauma?

On September 29, 2001, just a little over two weeks after the terrorist attack on 9/11, the New York Friars Club and Comedy Central went ahead with a planned “roast” of Hugh Hefner. As expected, some of the comedians slipped in references to recent events. 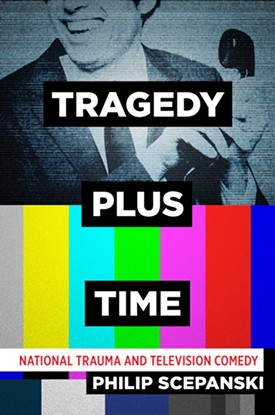 UT Press book cover
Social activist Dick Gregory made an inspirational plea for unity. TV host Drew Carey took some potty-mouthed potshots at Osama Bin Laden. Both very easy. But then when the unpredictable screamer Gilbert Gottfried took the stage, his material included this bit: “I have to leave early tonight. I have to fly out to L.A. I couldn’t get a direct flight. I have to make a stop at the Empire State Building.”

“The crowd responded with gasps, boos and shouts of ‘Too soon!’ Philip Scepanski writes in this insightful and innovative book. But how soon is ‘too soon’ when it comes to comedy, a basic tenet of which is to occasionally shock? And can you find comfort in discomfort?

Scepanski continues. “Because national traumas are so important to America’s politics and a larger sense of identity, comedy’s role as both an active agent of boundary-stretching and a passive test of changing discursive rules makes it a critical site in defining the way we speak of significant historical events.”

The book argues that elapsed time can be a tricky thing when it comes to comedy. On the very night of the JFK assassination, “sick” comic Lenny Bruce took to the stage and offered “Boy, is Vaughn Meader fucked!” (Meader was a celebrated JFK impressionist who had a hugely selling comedy LP with The First Family. His career never recovered).

But the JFK assassination was enough in the rear view mirror where in 1992 Seinfeld could do its own take for laughs using “the Magic Loogie” in place of a bullet. And in 2009 Family Guy (a show mentioned frequently in the book) could reimagine JFK as McDonald’s Mayor McCheese with a gruesome sight gag at the end.

But the window between event and comedy was getting shorter. Eddie Murphy’s brilliant “Assassination of Buckwheat” series of 1983 Saturday Night Live sketches came shortly after the successful and unsuccessful attempts on the lives of John Lennon, Ronald Reagan, and Pope John Paul II. Tellingly, the skits just as much skewer the frenzied and blanketing coverage of TV news of the events.

Some shows even face a sort of retro-censor where jokes seemingly OK at the time disappear after some related event. In 2000, Family Guy broadcast a segment where Osama Bin Laden sneaks through airport security with a bushel of guns by distracting them with Broadway show tunes. After September 11, the scene was cut from syndication and most home video releases.

The fact that so many of the shows who had the “edgiest” material were animated is also telling—it’s easier for cartoon characters to “get away” with dialogue and actions than real actors. And he details an unusually nuanced and layered episode of The Fresh Prince of Bel Air in which Will and Uncle Phil are challenged about their “blackness” and what that means when the family volunteers to clean up a poorer area of L.A. after the Rodney King verdict.

The book’s last chapter almost brings us up to date as it shows how television comedy reacted to, addressed, and at some points aggressively confronted the election of Donald Trump and subsequent political initiatives over the course of his Presidency. Though whether this actually relates to “trauma” depends on one’s political leanings and beliefs. And a late-inserted afterword briefly addresses COVID-19 as a national trauma.

Scepanski is fairly thorough in his writing on both the general topic as well as its neatly-ordered subtopics. The book's one noticeable fault is that his academic writing is often stilted, more Master’s Thesis than lively news and cultural history.

“Too soon?” will be a refrain comics, comedy writers, and their audiences will continue to ask themselves. Especially in an era where the frequency of national tragedies and traumatic even seem to come faster and more furious than ever, and both social and “regular” amplify it all.
KEEP THE HOUSTON PRESS FREE... Since we started the Houston Press, it has been defined as the free, independent voice of Houston, and we'd like to keep it that way. With local media under siege, it's more important than ever for us to rally support behind funding our local journalism. You can help by participating in our "I Support" program, allowing us to keep offering readers access to our incisive coverage of local news, food and culture with no paywalls.
Make a one-time donation today for as little as $1.