Reviews For The Uneasily Quarantined:
Army Of The Dead 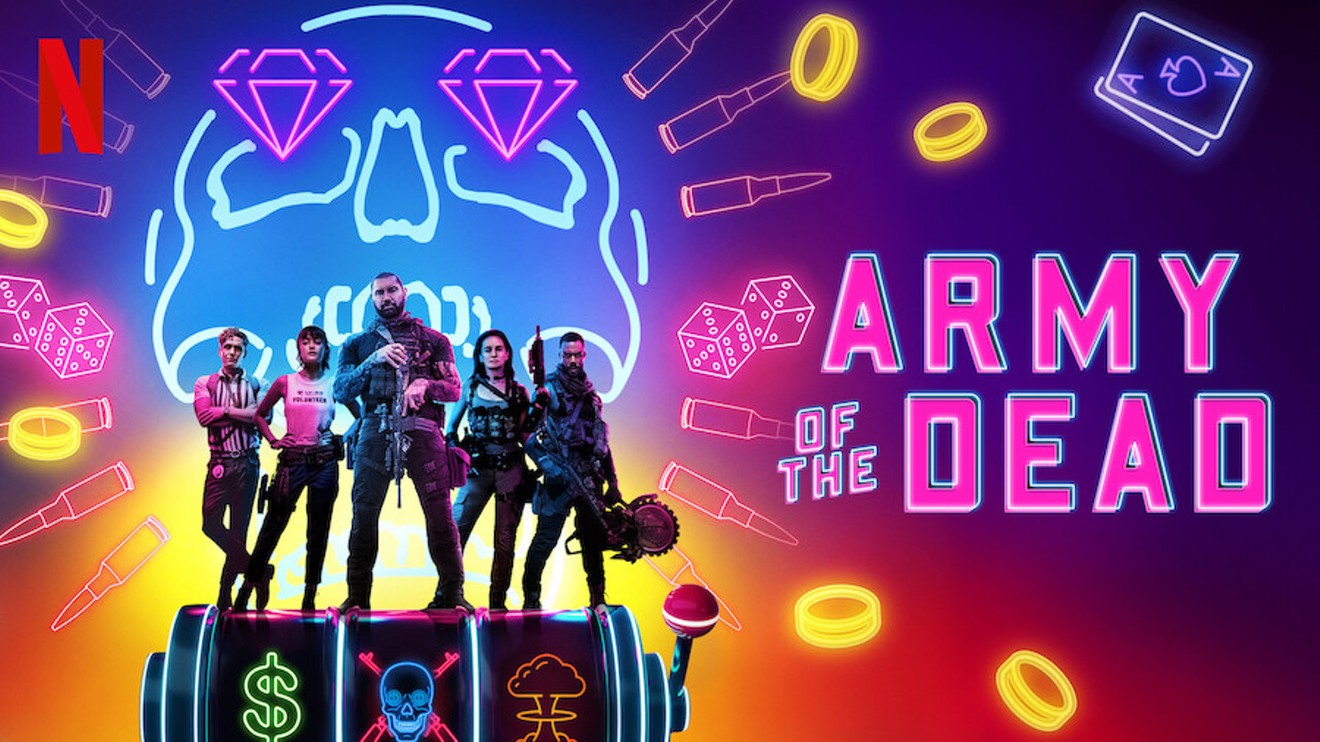 Netflix
Title: Army of the Dead

Describe This Movie In One (Bastardized) "The Hollow Men" Quote:

T.S. ELIOT: This is the way the world ends, Not with a bang, but a beej


Brief Plot Synopsis: When there's no more room in Hell, the dead will hit the buffet.

Rating Using Random Objects Relevant To The Film: 3 headpieces to the Staff of Ra out of 5.

Better Tagline: "What decomposes in Vegas ..."

Not So Brief Plot Synopsis: An outbreak of ravenous undead has shut down Sin City, forcing the government to launch a tactical nuclear strike to solve the problem. Unfortunately, that will also burn up the millions of dollars left in Bly Tanaka's (Hiroyuki Sanada) casino. Tanaka approaches former military hero Scott Ward (Dave Bautista), offering him $50 million to retrieve the money. Faster than you can say, "You son of a bitch, I'm in," Ward puts together a team to pull off the job.


"Critical" Analysis: Zack Snyder decided to take a breather from riling up his legions of DCEU fanboys with  "SnyderVerse" talks to release a movie showcasing his core strengths: namely, zombies and slow-motion bloodshed.

Snyder, after all, got his big break with 2008's Dawn of the Dead remake, which remains one of the best zombie movies of the 21st century. In fact, if we're ranking the "Of the Dead" variants, it compares pretty favorably to the 1978 original, and is head and shoulders above anything George A. Romero himself released post-2000.

Army of the Dead doesn't reach the heights of DotD, though not for lack of effort. With a formidable cast and savvy nods to other horror classics, Army is often very entertaining. It's also overstuffed and ends up longer than it needs to be.

But first, the good. Aside from Bautista — who's really come into his own as an action star — and maybe Garret Dillahunt as Tanaka's head of security, Snyder has assembled a decent cadre of "Oh hey, I know that persons," including Omari Hardwick (Power), Ana de la Reguera (The Book of Life), Theo Rossi (Sons of Anarchy), and Tig Notaro.

Notaro plays Peters, the helicopter pilot, replacing comedian Chris D'Elia after his firing over allegations of sexual misconduct. Snyder used green screens and CGI to effect the transition, and Notaro does a great job, but it's pretty hard to ignore once you're aware of it.

But Snyder knows what works and what doesn't (and if you think he lays on the Elvis pretty thick, you've never been to Vegas). The towers in Tanaka's casino may be named "Sodom" and "Gomorrah," but that's about the depths of his social critique. Unlike Romero, the closest Snyder gets to a "statement" is the unseen President's apparent displeasure that the nuke won't fall on the 4th of July because it would've been "cool."

You can bet your ass that nuking something on Independence Day was definitely proposed at some point during the last Administration.

AotD recalls everything from Return of the Living Dead to Escape From New York. There's also a nice riff on the opening to An American Werewolf in London, a movie enjoying a new awakening, thanks to this and Boys From County Hell.

And that might even be forgivable if Army of the Dead didn't also bloat itself with the "Alpha zombie" subplot, leveraging another Snyder trademark (undead baby!). It, along with the storyline involving Ward's estranged aid worker daughter (Ella Purnell) and some missing refugees, are superfluous when there are corpses to be perforated.

Still, it's a return to form for Snyder that succeeds in spite of his occasional lapses into, well, Snyder-ism. Army of the Dead is fun, gory, and predictably self-indulgent. Who knows, maybe if enough of you see this, we won't be subjected to more Angry Superman movies.

Army of the Dead is now in select theaters and streaming on Netflix.
KEEP THE HOUSTON PRESS FREE... Since we started the Houston Press, it has been defined as the free, independent voice of Houston, and we'd like to keep it that way. With local media under siege, it's more important than ever for us to rally support behind funding our local journalism. You can help by participating in our "I Support" program, allowing us to keep offering readers access to our incisive coverage of local news, food and culture with no paywalls.
Make a one-time donation today for as little as $1.