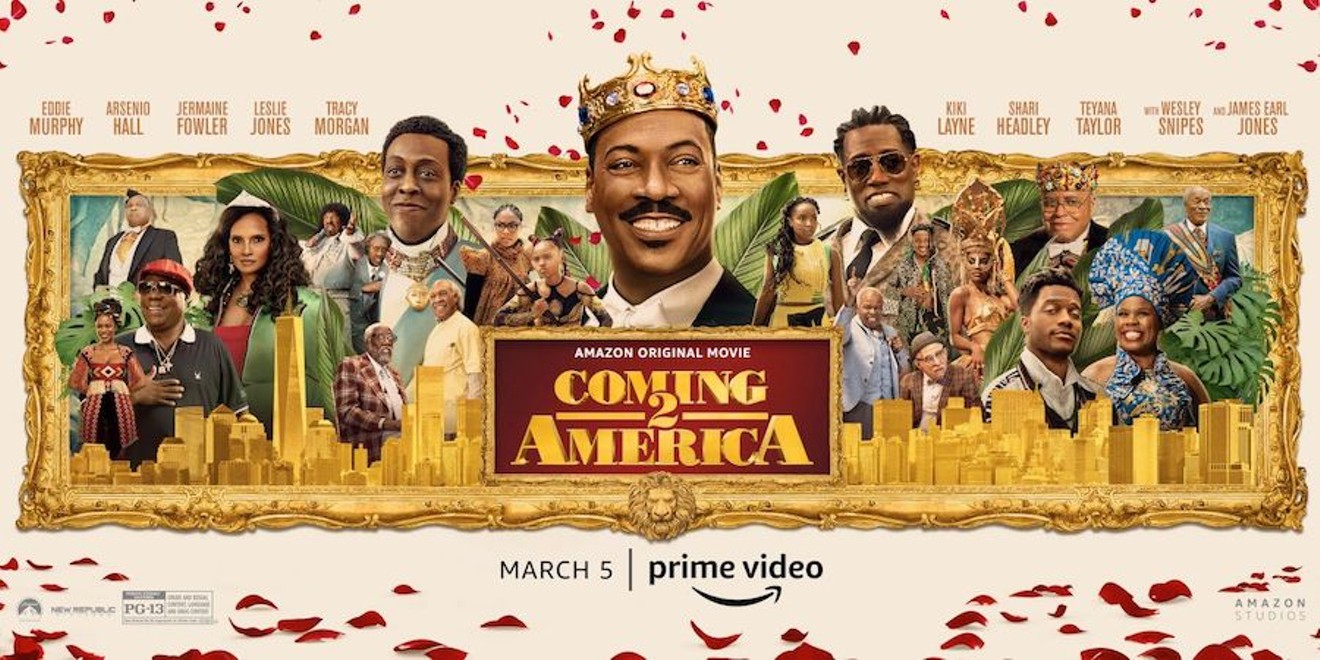 Describe This Movie In One History of the World, Part I Quote:

COUNT DE MONET: It is said that the people are revolting.
KING LOUIS XVI: You said it, they stink on ice.


Brief Plot Synopsis: Monarchy is kind of an outdated concept, it turns out.

Rating Using Random Objects Relevant To The Film: 2.5 bottles of Soul Glo out of 5,

Better Tagline: "Eh, why not?"

Not So Brief Plot Synopsis: King Jaffe Joffer (James Earl Jones) of Zamunda is ailing, and Prince Akeem (Eddie Murphy) realizes he himself has no male heir. That is, until his best friend Semmi (Arsenio Hall) reminds him of an unremembered dalliance from their trip to Queens 33 years prior. It turns out Akeem has a son named Lavelle (Jermaine Fowler), whose existence complicates the plans of General Izzi (Wesley Snipes), ruler of neighboring ... "Nextdoria."


"Critical" Analysis: That plot synopsis above may be a little lengthier than usual, but it sums up Coming 2 America in about as much time as the movie itself spend on the story. Which is fine, because that's not really why anyone is here.

Is the first Coming to America Eddie Murphy's best movie not called Dolemite is My Name? It's arguable in a universe where Beverly Hills Cop exists, but cases can also be made for Trading Places and 48 HRS. (even though he's not the sole star in either of the those). At any rate, CtA-era Murphy was the height of a career which would soon devolve into a string of box office disappointments and Nutty Professor movies.

The humor here is broader than before, which is to be expected when you throw Tracy Morgan and Leslie Jones (as Lavelle's mother Mary) into the mix. A return to Queens also introduces Akeem to the concept of gentrification, while Lavelle and a job interviewer get into it over white privilege. Colin Jost playing the interviewer makes the gag work better than it otherwise might have.

Original director John Landis is out, replaced by Craig Brewer, who also helmed Dolemite is My Name. CtA writers Barry W. Blaustein and David Sheffield are joined by black-ish's Kenya Barris, whom one suspects is responsible for the more topical jokes. Less clear is who thought keeping Zamunda's "royal bathers" in sexual servitude was a good idea.

Jones gets serviced as well this time around, so that makes it all better. I guess.

Brewer et al. once again hitch the plot to the Zamundan monarchy's royal succession, which forces Akeem to skip over his eldest (of three) daughters and look to Lavelle as his heir. It's an idea that was so tired Disney stopped doing it in the '90s, yet here we are, with Akeem — who was once all too willing to defy his father — repeatedly claiming his hands are tied in the matter.

It's a big step backwards for his character. Instead of showing how maturation and parenthood often go hand in hand with the calcification of free spiritedness, Murphy falls into the same old tropes. It doesn't help that he's ceding a lot of screen time to Jones and Morgan's shenanigans as well as Lavelle's budding romance with "royal groomer" Mirembe (Nomzamo Mbatha).

But if Akeem is a stick in the mud, at least everyone else seems to be enjoying themselves. And just like in Dolemite is My Name, that goes especially for Snipes, whose General Izzi is more campy than menacing. However, the inevitable easing of tensions between Zamunda and Nextdoria gives rise to another question: where the hell does Zamunda get its wealth? Diamonds? Oil? Trafficking royal bathers?

Coming 2 America is pretty spare, even by the standards of the genre, and even without the flashbacks and multiple musical numbers. Concerns about the "PG-13" rating are pointless, as the original's "R" was mostly due to naked breasts and Samuel L. Jackson's profane fast food felon. The innocuous rom-com at the center of the story ends up bookended by what everyone really wants to see, namely Murphy and Hall riffing as the My-T-Sharp barbershop guys and ... others.

And now that we've gotten this movie out of the way, it's time to give audiences what they *really* want: a Randy Watson biopic.

Coming 2 America is now streaming on Amazon Prime Video.
KEEP THE HOUSTON PRESS FREE... Since we started the Houston Press, it has been defined as the free, independent voice of Houston, and we'd like to keep it that way. With local media under siege, it's more important than ever for us to rally support behind funding our local journalism. You can help by participating in our "I Support" program, allowing us to keep offering readers access to our incisive coverage of local news, food and culture with no paywalls.
Make a one-time donation today for as little as $1.