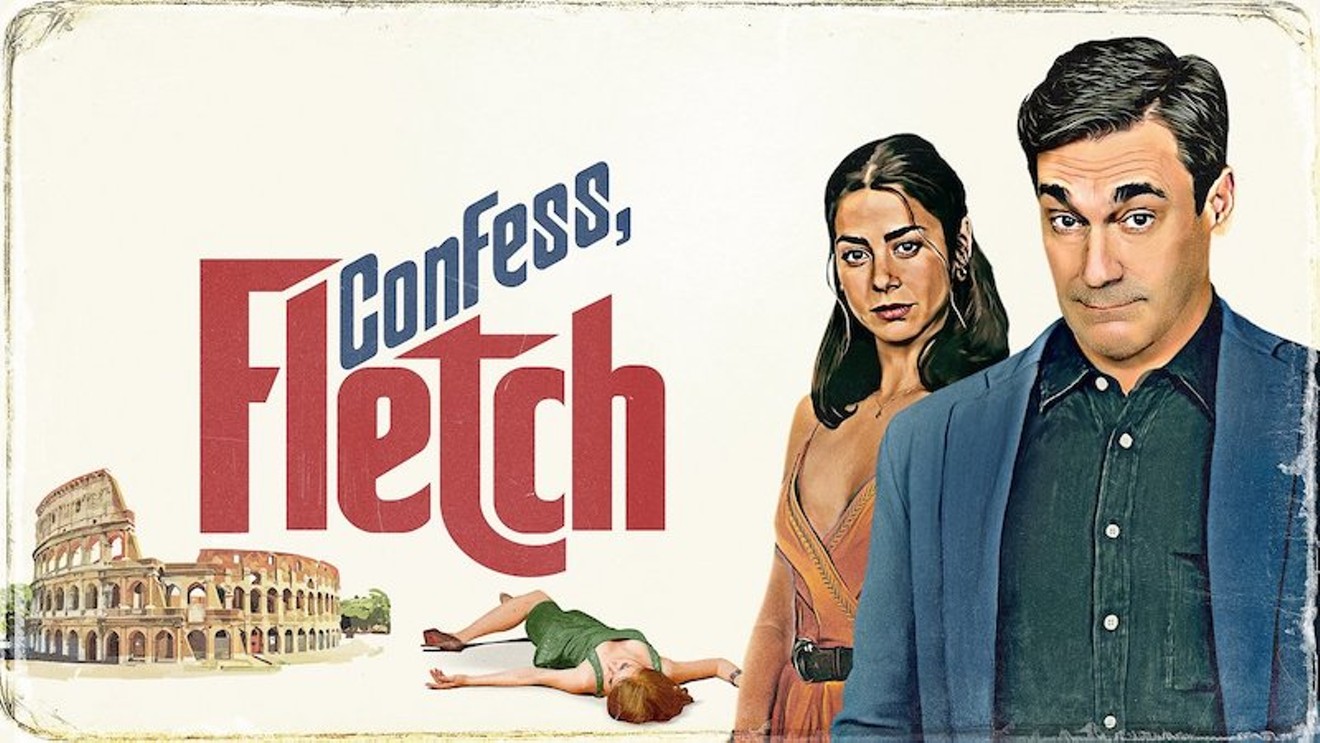 Describe This Movie In One The Thomas Crown Affair Quote:

Rating Using Random Objects Relevant To The Film: 3.5 water buffaloes out of 5.

YouTube
Tagline: "A dead body. A stolen Picasso. And this guy."

Better Tagline: "Maybe you'd be less conspicuous if you didn't wear a Lakers hat in Boston."

Not So Brief Plot Synopsis: Back in the U.S. after an extended stay in Italy, I.M. Fletcher (Jon Hamm), a "former investigative reporter of some repute" (as he frequently describes himself), finds himself the prime suspect in the murder of a woman whose body he discovers in his Boston Airbnb. Combine that with the kidnapping of his girlfriend Angela's (Lorenza Isso) father and the disappearance of her family's art collection — which Angela's stepmother "The Countess" (Marcia Gay Harden) may be involved with — well, that's quite a clam chowder our Fletch has gotten himself into.
"Critical" Analysis: Confess, Fletch comes to us courtesy of Greg Mottola (director of Superbad and Adventureland) and Zev Borow (Outer Range), who co-adapted Gregory McDonald's novel. It's the first big screen version of the character we've seen since 1989's Fletch Lives.

That 33-year gap wasn't for lack of interest. Hollywood has been trying to make Fletch happen since the 1990s, when Kevin Smith was attached and tried to bring everyone from Jason Lee to Ben Affleck to Jimmy Fallon on board. After Smith came Scrubs creator Bill Lawrence, who eyed Zack Braff as the lead, with pre-Ted Lasso Jason Sudeikis the latest to circle the role.

In retrospect, it's probably a good thing none of that panned out. Smith's non-Askewniverse output is uneven at best, Braff is too goofy, and Sudeikis is undoubtedly happier to be an Emmy winner on a critically acclaimed TV show.

Those of you who didn't see Mad Men's Jon Hamm as a potential candidate aren't alone, but this version of Irving Maurice Fletcher isn't so much the diametric opposite of Don Draper as he is a shadowy reflection. Fletch shares the ad man's focus, but not his fashion sense or taciturn demeanor.

But is he funny? He is, and so is Confess, Fletch. It's a welcome development in a time when comedies seem to be a dying genre, apart from those crossing genre lines (Thor: Love and Thunder) or being unintentionally hilarious (Moonfall). The humor is subtle rather than blatant, though there are several laugh out loud moments, bolstered by a powerhouse cast.

Hamm does smarm a little more subtly than Chevy Chase, who was admittedly better at slapstick. Thing is, Chase's shtick diverged from the McDonald character (and so did the weird disguises). As a literary adaptation, Hamm's Fletch is much more faithful to the source material, it just may not be very recognizable as a sequel to the Chase movies.

And if you're not emotionally invested in those movies, you're not really going to care. Chase hasn't exactly gone out of his way to endear himself to his fans, and devotees of the Fletch novels are somewhat more low-key than, say, Star Wars fans.

"You're saying it's *not* all ball bearings these days?"
Paramount Global
It's a relief, because Hamm really does put his stamp on the role, relying more on the character's world-weariness (Confess, Fletch is second novel released, but sixth in overall chronology) and quick wits. Another wrinkle Mottola throws in is how unnecessary the character's trademark con artistry has become in  this day and age. Examples include Fletch gearing himself up to sweet talk his way into an apartment building before getting indifferently buzzed in, or doggedly searching the undercarriage of his rental car for a GPS tracker only to find it sitting in the glove compartment.

Joining Hamm are Kyle MacLachlan as a germaphobe art dealer, Roy Wood Jr. as the  deliberate-to-a-fault detective assigned to investigate his case, a delightful Ayden Mayeri (who gets the bulk of the slapstick duty) as Wood's partner, and Eugene Mirman as a loopy security guard.

But perhaps the most pleasant additions are Harden's Countess, whose motives are hilariously unclear, and Hamm's old AMC partner John Slattery as Fletch's former news editor Frank (Larry also makes a cameo). Slattery is a profane wonder, and if there's one complaint about his performance it's that there isn't enough of it.

One aspect of the original movie I didn't realize I'd miss so much was Harold Faltermeyer's iconic score. David Arnold's effort is satisfactory, but largely forgettable

Was Confess, Fletch worth the wait? Sure, provided you're not expecting a rehash of the Chase flicks. The cast is great, it moves quickly (if a bit too elaborately), and features some lovely location shooting. Time will tell if it's successful enough to warrant more entries. If not, we may have to wait another 30-odd years.

And Jason Sudeikis can play Frank.

Confess, Fletch is in theaters today.
KEEP THE HOUSTON PRESS FREE... Since we started the Houston Press, it has been defined as the free, independent voice of Houston, and we'd like to keep it that way. With local media under siege, it's more important than ever for us to rally support behind funding our local journalism. You can help by participating in our "I Support" program, allowing us to keep offering readers access to our incisive coverage of local news, food and culture with no paywalls.
Make a one-time donation today for as little as $1.