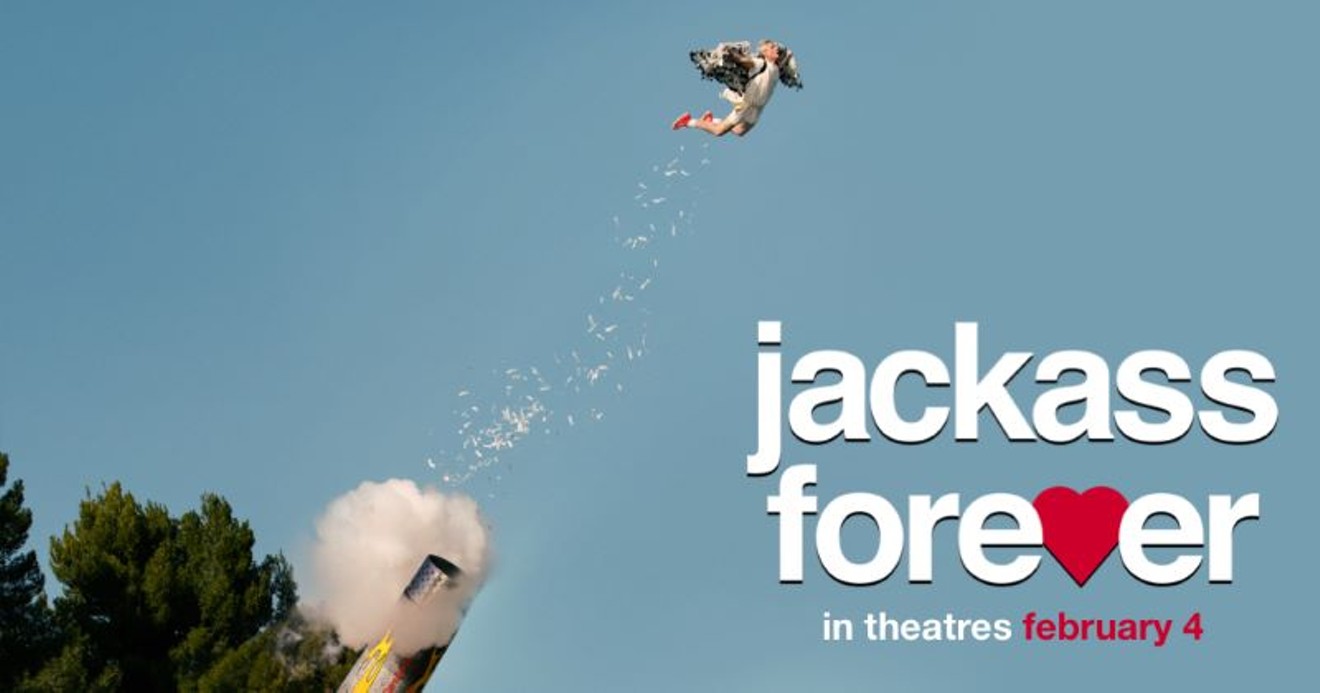 Rating Using Random Objects Related To The Film: 3.5 Marcel Marceaus out of 5.

Better Tagline: "Who stunts the stuntpeople?"

Not So Brief Plot Synopsis: Johnny Knoxville leads his merry band of masochists through one final gauntlet of (mostly) self-inflicted violence and grotesquerie.
"Critical" Analysis: A lot has changed, to put it mildly, since the last time we saw a Jackass movie in theaters. The year was 2010, six years before a barely literate talk show host would become President, and a full decade before COVID-19 would turn most of us into resentful shut-ins. It wasn't be "best of times," by any reasonable stretch, but it wasn't now.

So far, 2022 isn't much fun. Global uncertainty looms over us while domestic rancor threatens the very fabric of our fragile Republic. America needs ... something to lift it from its doldrums and make its citizens proud of their country once more.

In short, America needs nut shots. And lots of 'em.

Jackass Forever isn't exactly groundbreaking. The stunts here are, for the most, part, variations on those we've seen in the previous three films (as well as the original MTV series). If there's a difference to be found, it might be in the sense of finality enveloping the proceedings.

Sure, the core group of "professionals" — Knoxville, Steve-O, Chris Pontius, Jason "Wee Man" Acuña, Preston Lacy, Dave England, and Ehren McGhehey — gets put through the expected paces, but there's a weariness behind much of it. The interstitial gags tend to feature the newer crew, and the toll that 20+ years of explosions, electricity, and entomological intrusion (bugs) have taken on the old-timers is more evident than ever before.

Interestingly, it's newcomers Sean "Poopies" McInerney, Jasper Dolphin, Zach Holmes, and Rachel Wolfson who start off taking their turns getting Tased and bitten/stung/walloped. It's almost enough to make you think the old hands are getting off easy. That's before McGhehey undergoes what might be referred to as the Ultimate Cup Test, followed by Knoxville's 16th(!) concussion.

But then, there's plenty of dick pain (to coin a phrase) to go around. Some stunts, like the K-Y Jelly slip-and-slide, are the essence of simplicity. Others, like the blackout Silence of the Lambs bit (complete with Pontius reprising Buffalo Bill's "Goodbye Horses" dance), are intricately deranged.

And if some gags aren't broke, don't fix 'em. Are there bees? Yep. A bull? See the aforementioned concussion. Does cameraman Lance puke? Twice! And would it really be a Jackass movie without an exploding Port-A-John or three?

Is it possible to get choked up at the end of a goddamn Jackass movie? The third one was melancholic in its way, but the attitude there seemed mostly one of relief. Today, as we all know, not everyone made it to the end. Ryan Dunn died in a car wreck in 2011, and Bam Margera was fired from the set of Forever. Even the infusion of new blood can't stave off the reality that this really is the last hurrah.

And just in time. Jackass Forever comes during a period of crisis. Old media stalwarts like the New York Times have tried (often clumsily) to get to the heart of the divisions in our country without offering real solutions. Previous generations had wars and depression to unite them, so if watching a guy get drenched in pig semen is what America needs to heal, we'll take what we can get.

Jackass Forever is in theaters today.
KEEP THE HOUSTON PRESS FREE... Since we started the Houston Press, it has been defined as the free, independent voice of Houston, and we'd like to keep it that way. With local media under siege, it's more important than ever for us to rally support behind funding our local journalism. You can help by participating in our "I Support" program, allowing us to keep offering readers access to our incisive coverage of local news, food and culture with no paywalls.
Make a one-time donation today for as little as $1.