Reviews For The Easily Distracted:
Puss in Boots: The Last Wish 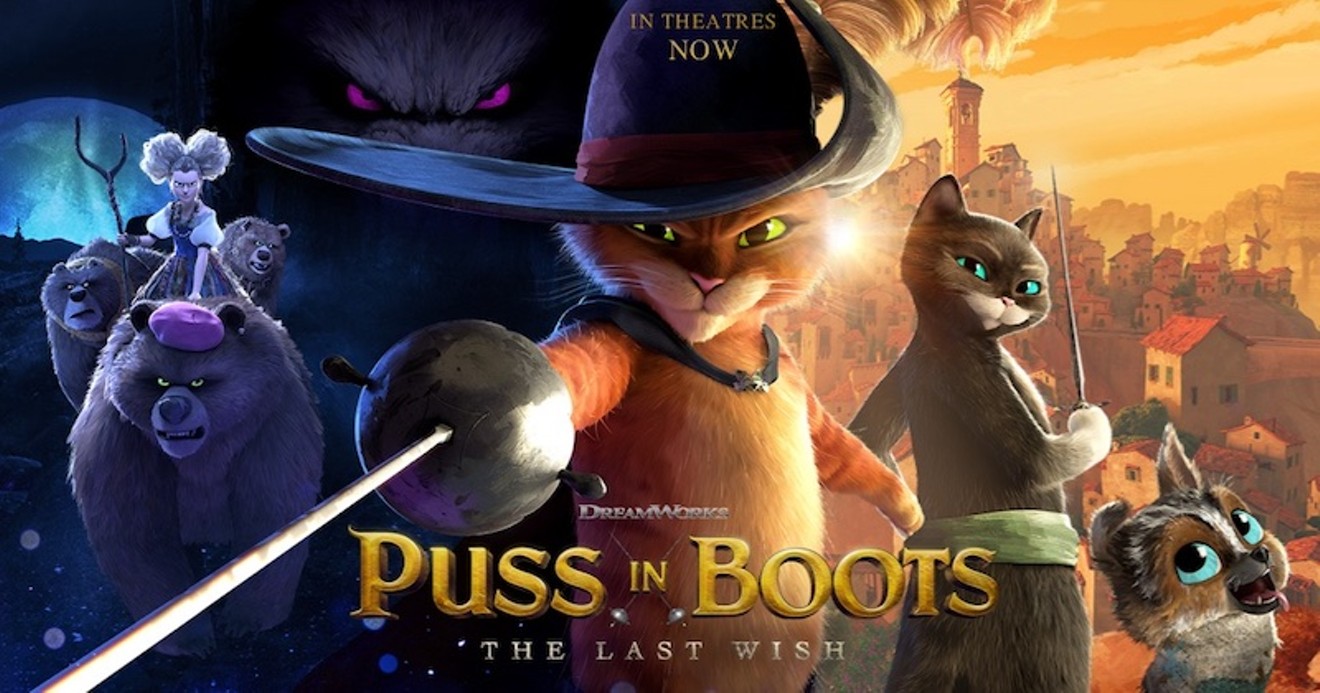 Describe This Movie In One "Black Cat" Lyric:

Rating Using Random Objects Relevant To The Film: 3.5 Grim Reapers out of 5.

Better Tagline: "Nary a Scottish accent to be found, thank god."

Not So Brief Plot Synopsis: It's looking grim for the swashbuckling Puss in Boots (Antonio Banderas). Down to his last life, he's seeking out the fabled Wishing Star to stave off the inevitable. Begrudgingly joining him on his quest are his ex, Kitty Softpaws (Salma Hayek Pinault) and a wannabe therapy dog (Harvey Guillén) with an unexpectedly horrific backstory. Together, they must find the Wishing Star ahead of the now villainous Big Jack Horner (John Mulaney).
"Critical" Analysis: Has any property aged as poorly as the Shrek movies? True, the James Bond series has never fully shaken its core misogyny, and Star Wars increasingly seems like a series best viewed through the lens of nostalgia. Yet few properties were as dependent on concepts that were already contemporaneously dated ("bullet time," Smash Mouth) as those ogre flicks.

But as was pointed out in somebody's review of the first Puss in Boots, Banderas was a highlight. His enthusiasm for the character and on-point voice work carries a fairly rote story about conquering one's fears and accepting one's shortcomings.

PIB:TLW also comes heavy with the anachronistic jokes and rule-of-three visual gags (kudos for being probably the only movie aimed at children to include "The End" by the Doors). There are also some chuckle-worthy references to other flicks, such as St. Elmo's Fire and the Wicker Man remake.

DreamWorks and director Joel Crawford still can't help themselves when it comes to digs at Big Mouse, however. Mulaney's villainous Jack Horner is accompanied by an increasingly horrified Jiminy Cricket analog named "Ethical Bug" (Kevin McCann) whose reactions are often hilariously on target.

The cavalcade of secondary characters continue with cameos from Pinocchio and the Gingerbread Man and antagonists Goldilocks (Florence Pugh) and the Three Bears, now a crime family voiced by Olivia Colman and Ray Winstone as Mama and Papa.

Everything moves along well and with a light enough touch to recommend it, and not even mildly. Banderas and Hayek Pinault have an easy chemistry, Guillén overcomes some excessive early enthusiasm to settle in comfortably, and as least one member of my household remarked, Mulaney's recent infidelity really bolstered his portrayal of a bad guy.

A warning, though: along with the sight gags, snappy banter, frenetic action sequences, and an extended riff on the cute "big eyes" thing, The Last Wish is, in a larger sense, a meditation on mortality and the inevitability of death. Will lessons imparted about the appreciating what we have fly over the heads of younger kids? Possibly. Will off-handed references to drowning puppies? Possibly not.

Puss in Boots: The Last Wish is in theaters today.
KEEP THE HOUSTON PRESS FREE... Since we started the Houston Press, it has been defined as the free, independent voice of Houston, and we'd like to keep it that way. With local media under siege, it's more important than ever for us to rally support behind funding our local journalism. You can help by participating in our "I Support" program, allowing us to keep offering readers access to our incisive coverage of local news, food and culture with no paywalls.
Make a one-time donation today for as little as $1.