Reviews For The Easily Distracted:
The Batman

Describe This Movie In One Batman Begins Quote:

Rating Using Random Objects Relevant To The Film: 3.5 Park Chan-wooks out of 5.

Better Tagline: "What's black and gray and red all over?"

Not So Brief Plot Synopsis: A mere two years into his crime-fighting crusade, Bruce Wayne (Robert Pattinson) is experiencing an existential dilemma. To wit: what if Batman didn't make a difference? Sure, he has the ear of idealistic GCPD lieutenant Jim Gordon (Jeffrey Wright) and a potential ally in the mysterious Selena Kyle (Zoë Kravitz), but will that be enough against crime boss Carmine Falcone (Jon Turturro) and the sinister Riddler (Paul Dano)?

"Critical" Analysis: If The Batman suffers at the box office, it won't be a quality issue. Director Matt Reeves has given us an intriguing (if overlong) take on the Caped Crusader, with impressive cinematography (courtesy of Greig Fraser), a foreboding score (Michael Giacchino), and strong performances from all concerned, but especially Pattinson, Wright, and Colin Farrell (as Oswald "Penguin" Cobblepot).

No, if anything, the culprit would be oversaturation (or "overbaturation," to borrow a pun from the old 1960s TV show).Being generous with the definition, there have been 14 "Batman movies" released since 1989, with half of those coming in the last decade.

Then again, Spider-Man seems to be doing pretty well for himself. Don't ask me how the economy works.

Whatever happens, The Batman is a solid entry in the series, even allowing for its overindulgences and ... let's just call them "enthusiastic homages."

Reeves must be a big David Fincher fan, because The Batman is dripping with his influence, from Zodiac inspired ciphers, the serial killer lair in Se7en (down to the notebooks), to a Fight Club-esque plot to take down the wealthy. All he needed to come full circle was to make the Riddler a former employee of Consumer Recreation Services. 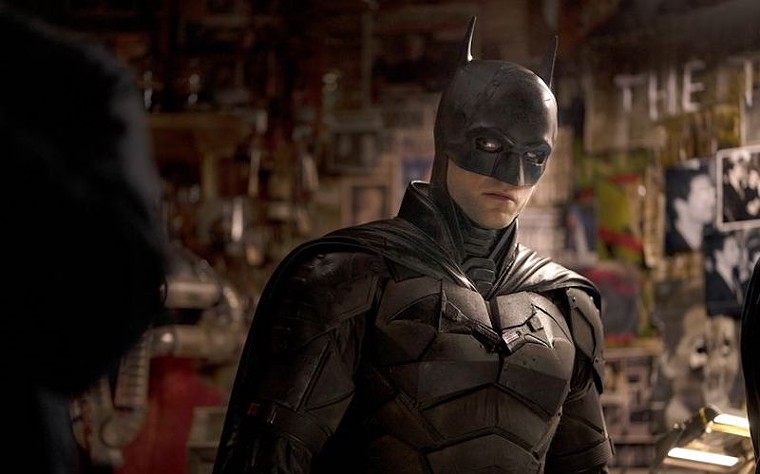 "You talking to me?"
Warner Bros.
Reeves and co-writer Peter Craig also leverage previous Bat-properties. If it doesn't seem a very novel concept that the entirety of Gotham City's government is corrupt, well, that dates back to Batman: Year One, if not earlier (the likely source of Catwoman's look as well). We're also far enough removed from the Adam West era that the foreboding cityscapes aren't surprising, but the sets (Wayne Manor, most notably) are almost Burton-esque in their Gothic complexity.

Pattinson's portrayal of the Dark Knight, on the other hand, is unique for what it leaves out: namely any semblance of giving a shit about the "Bruce Wayne" identity. His is the only version of the character that barely gives lip service to an alter ego. If Tim Burton and Joel Schumacher's Batmen were halfway between West and Frank Miller and Christian Bale was just looking for the exit, Pattinson may be the first wholly schizoid cinema version we've gotten.

And it feels like people may be overselling how much of a "detective" story this is. Batman has a great memory, cool gadgets, and does his research, sure, but the underlying mystery isn't exactly Raymond Chandler caliber.

Like, the Riddler goes to great lengths to explain his master plan, but it doesn't amount to much, honestly. The bigger problem is his menace mostly comes from the Army surplus togs and voice modulation (which sounds eerily like Heath Ledger's Joker snarl, amusingly enough). Otherwise, his (unmasked) demeanor is more like the creepy guy in your sophomore CompLit class who always volunteered to read the Henry Miller excerpts.

The Batman does feature exemplary action, including a great car chase, and some singular fight scenes, including one blackout melee sequence that's as fine as any in the last 20 years, superhero genre or not. Farrell is also excellent, turning a character that serves no real narrative person into the closest thing the movie has to (welcome) comic relief. The movie also ends with a message of hope that, while earned, feels really out of place these days.

The Batman is in theaters today.
KEEP THE HOUSTON PRESS FREE... Since we started the Houston Press, it has been defined as the free, independent voice of Houston, and we'd like to keep it that way. With local media under siege, it's more important than ever for us to rally support behind funding our local journalism. You can help by participating in our "I Support" program, allowing us to keep offering readers access to our incisive coverage of local news, food and culture with no paywalls.
Make a one-time donation today for as little as $1.