Describe This Movie In One Lethal Weapon Quote:


ROGER MURTAUGH: I'm getting too old for this shit.

Rating Using Random Objects Relevant To The Film: 3.5 Jerry Hathaways out of 5.

Better Tagline: "It's a small thermal exhaust port, just below the main port."

Not So Brief Plot Synopsis: Maverick's back, baby. Still a lieutenant and test pilot despite 30+ years in the Navy, Pete Mitchell (Tom Cruise) is offered one last chance to stay airborne after taking a prototype scramjet out for a spin: return to "Top Gun" and train a new group of hotshot aviators for a time-sensitive and possibly suicide mission. One problem: said aviators include one "Rooster" (Miles Teller), the son of Maverick's old reel Goose, who was killed while flying with him.

"Critical" Analysis: In the opening scenes of Top Gun: Maverick, USN Admiral "Hammer" Cain (Ed Harris, patriarchal in an unfriendlier Tom Skerritt kind of way) frames his orders in terms our protagonist can understand: the future is coming, and Maverick's not in it. Thing is, that statement could be as much about Cruise and cinema itself as about the Navy's coming drone/remote pilot reality.

Famously eschewing streaming releases and CGI flight scenes, and insisting on doing his own stunts (though he wasn't allowed to fly an actual F/A-18E/F, contrary to reports), Cruise is possibly the last '80s action man standing in that regard. Admire him for his resolve or mock him for his zealousness, the guy's insistence on giving audiences that widescreen experience does improve our enjoyment of his action spectacles. 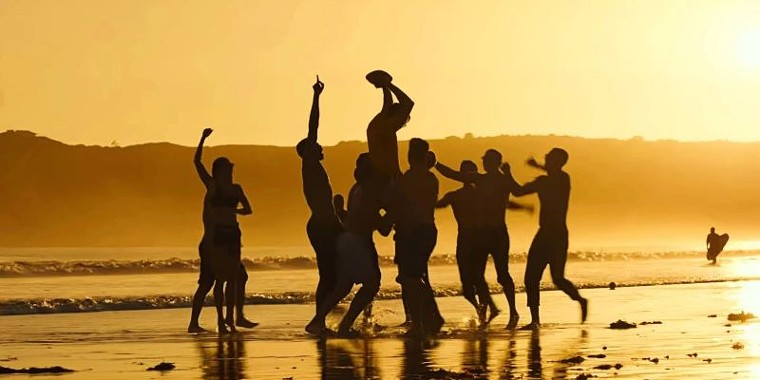 Oh, don't act surprised.
Paramount Pictures
Unlike the original, however, the final mission is actually the catalyst for the training, and not the other way around. Maverick is brought in to teach this new batch of pilots to complete the Death Star run an attack on a uranium enrichment facility in ... some country. The target nation is unnamed except for being a "mountainous rogue state" and for having fifth-generation fighter jets as well as F-14s.

Another difference is a lack of Maverick's original love interest, Charlie. Kelly McGillis wasn't asked to return, probably for the crime of aging like a normal human being. Replacing her is Jennifer Connelly as "Penny." The two share a rich history we don't know anything about (is she the "Admiral's daughter" Goose alluded to in the first movie?) but is nonetheless explicable considering it's been 36 years since we've been in this world.

Maverick is, by just about every metric*, superior to the original, thanks in large part to the flight footage. Cruise and company had to learn how to operate IMAX cameras in the cockpit, with Kosinski shooting over 800 hours of film. The result is some of the most thrilling flying scenes ever filmed. An actual thematic objective also doesn't hurt, and Cruise even gets a chance to run.

Of course, that comes during the movie's most ridiculous sequence.

Maverick is empirically better than Top Gun, but maybe that's due to its star, who appears more and more likely to have an actual on-screen cinematic death wish (a potential selling point). Like its predecessor, it thrives on military fetishism, asshole energy, and the suspension of belief usually reserved for latter-day Liam Neeson fight scenes. Top Gun: Maverick is loud, jingoistic, and dumb, which is exactly the kind of summer movie America deserves.

* "Take My Breath Away" is a better song than "Hold My Hand."

Top Gun: Maverick is in theaters today.
KEEP THE HOUSTON PRESS FREE... Since we started the Houston Press, it has been defined as the free, independent voice of Houston, and we'd like to keep it that way. With local media under siege, it's more important than ever for us to rally support behind funding our local journalism. You can help by participating in our "I Support" program, allowing us to keep offering readers access to our incisive coverage of local news, food and culture with no paywalls.
Make a one-time donation today for as little as $1.