Find Bliss With These Flavorful Recipes for Cooking With Cannabis

Left: Stoner Candy Bites, 1.1 mg of THC per piece. Reprinted with permission from Bong Appétit: Mastering the Art of Cooking with Weed by the Editors of MUNCHIES, copyright © 2018. Published by Ten Speed Press, an imprint of Penguin Random House. Photos by Marcus Nilsson © 2018
While food world insiders are all abuzz about cooking with pandan, timut pepper, berbere and the memory enhancing nootropics, the editors of MUNCHIES have been fine-tuning the 1,000-year-old practice of weed consumption.

According to Rupa Bhattacharya, MUNCHIES Editor-in-Chief and one of the collaborative editors for the new book Bong Appétit: Mastering the Art of Cooking with Weed, cannabis can actually be used to make food taste better, which is contra to everything we thought we knew. For years potheads have been trying to disguise its taste by mixing it into brownies and other baked goods.

Here in Texas we've got to road-trip up to Colorado (or fly to Los Angeles) to sample the new breed of edibles — gummies, truffles, olive oils and beverages — but best to leave anything uneaten at the border.

Bhattacharya and her team feel your pain, and know that most states don't have access to THC infused products, so they devoted a whole section on how to infuse oil, butter, milk, syrup and alcohol with cannabis. These gourmet infusions form the framework for most of the recipes, though they do include some that call for hash or the marijuana flower.

"If you live in a legal state you can purchase cannabis olive oil, you can add it to dishes," says Bhattacharya. "We wanted the vast majority, for states where it’s not legal, to have access to these infusions." 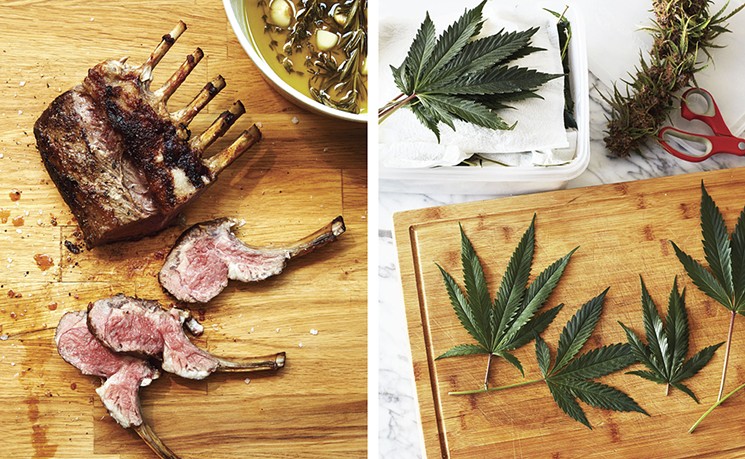 Left: Yogurt-marinated lamb, 5.2 mg of THC per serving. Reprinted with permission from Bong Appétit: Mastering the Art of Cooking with Weed, copyright © 2018. Published by Ten Speed Press, an imprint of Penguin Random House.
Photos by Marcus Nilsson © 2018
Most of the recipes look like they could be served at any high-end restaurant: double-lemon roast chicken, rib-eye with weed chimichurri and creamy cilantro kale salad with coconut bacon. But they also understand the mindset of anybody who's been hungry and high, with that insatiable craving for something sweet, then salty, then crunchy, then chewy.

Book collaborator and cannabis expert Thu Tran, from the Viceland television series Bong Appétit, lent the recipe for Stoner Candy Bites. The ingredient list goes something like this: potato chips, pretzels, corn flakes, marshmallows, chocolate chips, candy sprinkles and — for that magical lift — flower-infused butter. It yields 1.1 mg of THC per piece, or 66.8 mg for the entire recipe.

That's the other thing: The editors know that there are wild variations in quality and potency so exercise caution when trying a new recipe. That means don't eat the whole tray of candy bites in one sitting and never ever ever let children or pets gain access to edibles.

Bong Appétit does delve into flavor pairings and the science of infusion, and it's got beautiful photography by Marcus Nilsson, but it's more than just a cookbook.

"We have decades of culinary experience, experience with the various strains. In terms of strength, there’s a section that addresses that. It’s so variable, depending on climate conditions, how it’s processed, it’s a little bit tricky. There’s a little bit of extrapolation," says Bhattacharya.

The editors also are aware that they've devoted a whole book to the subject of marijuana, yet there are people who remain incarcerated for the very same substance.

"We’re hoping that this book opens the door to widespread acceptance, as well as a recreational thing," says Bhattacharya. "It seems wrong to not address that. There are people sitting in jail right now; we have significant privilege here. It’s a nice book, pretty, lifestyle-y. It would be shortsighted to not address it.


"Fundamentally, this book is about taking cannabis cooking beyond pot brownies," says Bhattacharya.


Instead of writing a book where the goal is getting as high as possible and then waking up wondering where you've been, she says Bong Appétit treats cannabis "as something to be enjoyed, and delicious and enjoyed together," adds Bhattacharya.

Bong Appétit: Mastering the Art of Cooking with Weed, by the editors of MUNCHIES, is published by Ten Speed Press. It can be ordered from Brazos Bookstore, on amazon.com, as well as other booksellers.
KEEP THE HOUSTON PRESS FREE... Since we started the Houston Press, it has been defined as the free, independent voice of Houston, and we'd like to keep it that way. With local media under siege, it's more important than ever for us to rally support behind funding our local journalism. You can help by participating in our "I Support" program, allowing us to keep offering readers access to our incisive coverage of local news, food and culture with no paywalls.
Make a one-time donation today for as little as $1.