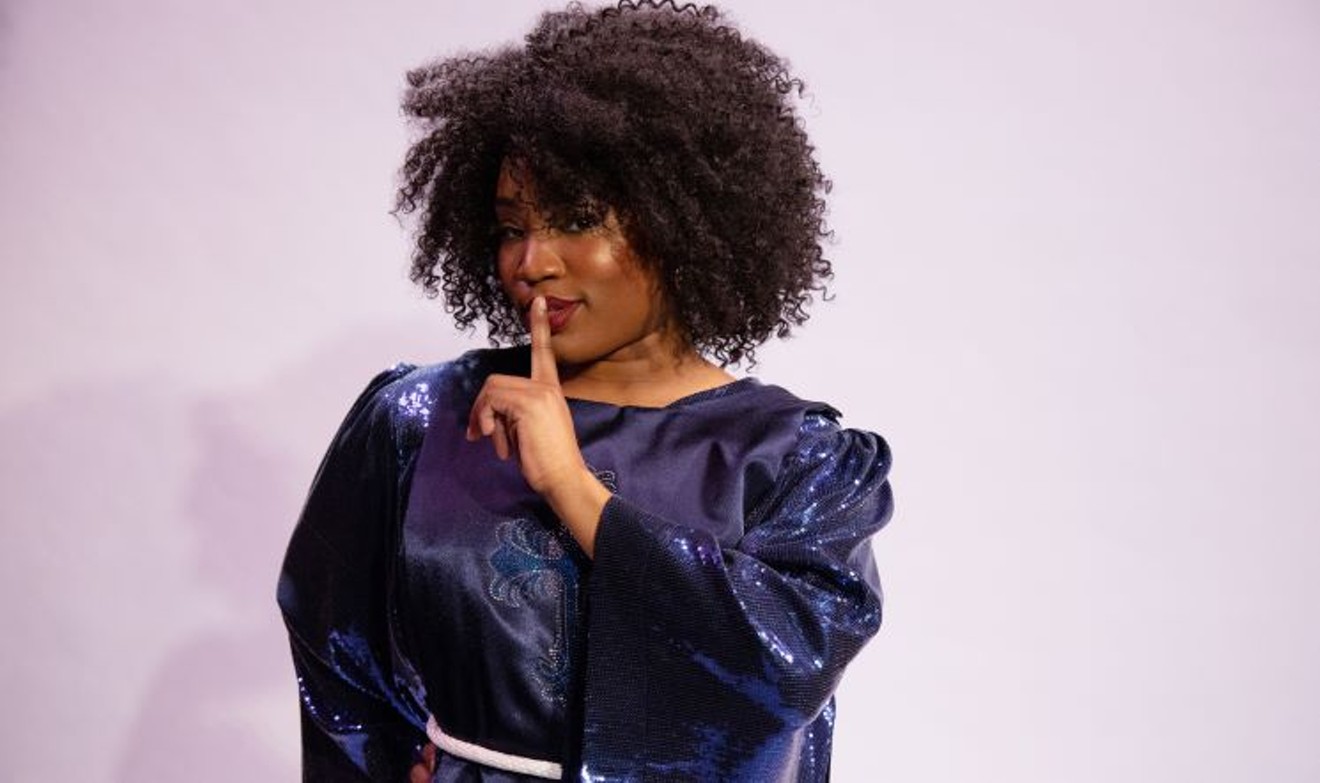 "Shh, we're about to unveil a secret," says Simone Gundy (in Sister Act.) Photo by Laura Hagen
In a move born of optimism tempered with caution, Theatre Under the Stars today announces its readjusted 2021-22 Season, one that starts off in October with Rock of Ages and winds up with Jersey Boys in May, betting that audiences are ready to come back to live theater and we'll all be in a better place come fall.

"We were really trying to preserve as much of the season as we had promised as the pandemic hit," says TUTS Artistic Director Dan Knechtges. He knows that he still has a lot of hurdles to navigate including whether people are willing to come back, Actors Equity restrictions TUTS will have to meet, as well as whether audience members are going to comply with any health protocols self-imposed or otherwise in light of where the pandemic is in future months.

"It is a very, very big Janga puzzle to try to get this going," he says. "We know enough to mitigate the risk. My hope is that we're going to come back stronger than ever."

In putting together the coming season, they did have to rearrange the order a bit. They had to set aside what would have been their first full length musical premiere in a while and lost completely the pre-Broadway version of 1776 because of a delay in the New York City opening. Knechtges says he hopes to get the post-Broadway version in a future TUTS season.


The musicals included in the TUTS 2021/22 Season at the Hobby Center are:


Talking about the season, it's clear Knechtges wanted a season filled with heart, the familiar and when possible, the fun and the funny especially when he talks about Rock of Ages ("a fun, campy party, feel good show") and Sister Act ("I desperately wanted to do to showcase Simone Gundy of Houston and it's also fun).

As for Disney's Little Mermaid ("a TUTS legacy show), it did better here than on Broadway, Knechtges says, so that wasn't hard to green light.

South Pacific ("definitely a TUTS legacy show"). "It is as relevant today and perhaps even more relevant than when it premiered," he says. When first performed at TUTS in 1972, there was a pool on stage and actors as divers who dove into the orchestra pit. "That show made TUTS' star rise," he says. And while the upcoming show won't feature those kind of theatrics, it will still be as comprehensive as audiences see on Broadway because of the large dimensions of the Hobby Center stage and an orchestra pit large enough for a full scale orchestra to handle all that classic music.

The timing on bringing back Come From Away ("TUTS invested very, very early on with its genesis") with its heartfelt story about a community coming together in a time of crisis makes perfect sense, Knechtges says and Jersey Boys has always been a local favorite.

And even if audience members have seen some of these shows before that doesn't mean they shouldn't come again, Knechtges insists, rightfully pointing out that the actors in the roles are different, there may be different staging and choreography and a different director may have a whole new vision for how the story should unfold on stage. Not going because you've seen it once would be akin to an opera lover restricting himself to one performance of Rigoletto.

There's another important variable in returning to see a show again, Knechtges says. For instance, the last time Mermaid was here was eight years ago. "We as a society have changed light years in eight years and how does that affect us in viewing that piece?" he asks. In like manner, many of the audiences that saw Ragtime in the 1990s assumed racism was a thing of the past, he says. Seen in 2019, Ragtime made a very different impression on TUTS audiences many of whom were moved and/or offended by what it was saying about racism, Knechtges says.

"That's what's so exciting about theater to me. It's not just the artists  on stage that are different, we also participate and we are different in terms of where we are as a society."

Pure Country was to have been TUTS' first fully staged musical premiere in a while. Both it and and Disney's Newsies had to be canceled because of COVID-19 in March 2020. The hiatus is a particular disappointment to Knechtges because prior to that, TUTS had really been on a roll and drawing more people to its productions.

When Knechtges talks about lost momentum for his organization, though, what he zeroes in on is the behind-the-scenes work that he says helped TUTS make impressive leaps in its popularity in recent years.  "A lot of the very unglamorous parts of doing theater nobody sees —  with our crew, the administrative staff. We have to build up that administrative muscle. It takes years to be able to do that.  Once you start losing people that learning curve of getting the administrative muscle back takes a long time. That behind the scene momentum is the thing that's going to be the hardest thing to come back for us."

And in a bit of bittersweet irony, what some people consider a weakness of what Houston has to offer as a theater community — namely that it's difficult to make a living doing just stage work — turned out to be a strength Knechtges says.

TUTS under the present leadership of Knechtges and Executive Director Hillary J. Hart has focused more on local actors and locally produced shows. Asked what this did to those local artists, Knechtges says "In some ways as we’ve been checking in with those artists — actors, designers and certainly orchestra conductors — and Houston never was a town where they could 100 percent make their living doing exactly that. Which is a weakness but also a strength in this instance they were able to pivot or ricochet into other things that have kept them alive and thriving. Many of them have expressed to me how excited they are to be back in the mix."

In coming months Houston audiences may be seeing new faces on stage, Knechtges says, "We’ve been contacted by a lot of Broadway folks who I've known in my New York career who have moved back to Houston and have moved back to Texas because they did not want to go through the pandemic in New York and now they're realizing Houston's a pretty great city and they don't want to go back."

From the people he's talked with, Knechtges says, the universal message is that they miss live performances of whatever type. He says he hopes this feeling will carry audiences into theaters in support both financial and emotional.

"I’m also excited for us to come back and really take what we have learned in the stillness and apply it to what we do on stage. I mean everyone has been talking about when Shakespeare came back from the Bubonic Plague, he wrote all of these masterpieces. I'm really excited by that thought too that when we come back there are going to be a couple of masterpieces waiting for us to put on stage."

TUTS season ticket packages are now on sale for people who want to attend three or more performances. Sing ticket sales will open up on Monday, July 19.
KEEP THE HOUSTON PRESS FREE... Since we started the Houston Press, it has been defined as the free, independent voice of Houston, and we'd like to keep it that way. With local media under siege, it's more important than ever for us to rally support behind funding our local journalism. You can help by participating in our "I Support" program, allowing us to keep offering readers access to our incisive coverage of local news, food and culture with no paywalls.
Make a one-time donation today for as little as $1.