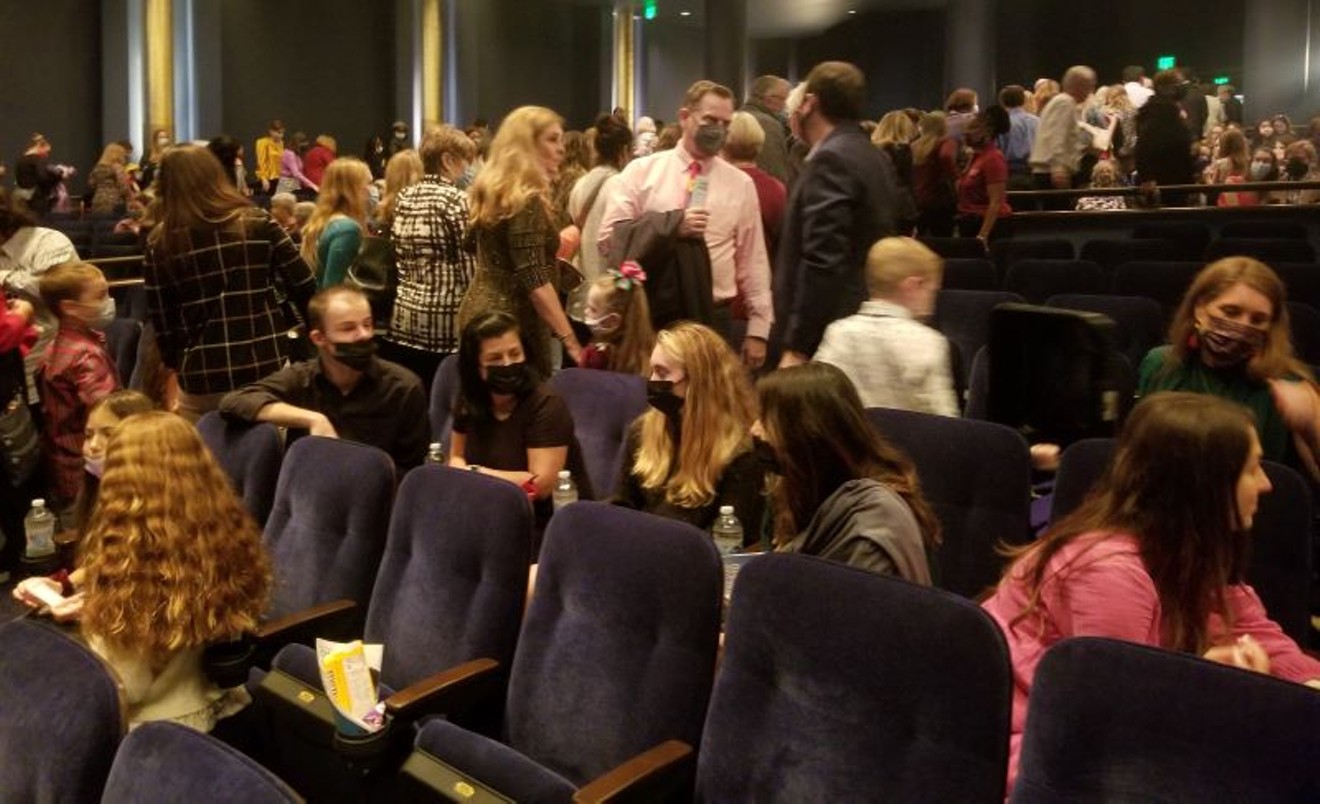 Disappointed kids and their parents leave the Hobby Center after TUTS announces Saturday's matinee is canceled. Photo by Margaret Downing
Update 1:25 p.m. 12-19-21:
Alley Theatre has just announced that its performances for today are also canceled because of a positive COVID test.

Update 9:15 a.m. 12-19-21:
Theatre Under the Stars has just announced that it is canceling today's (Sunday's) performances as well.

“While we had hoped to resume performances on Sunday, we have confirmed a positive COVID case among our performing company. Our paramount concerns are for the health and safety of our artists and audiences. It does, regrettably, put us in the position of making hard decisions and cancelling performances this weekend,” said Theatre Under The Stars Artistic Director, Dan Knechtges. “Performances will resume on Tuesday, December 21."

Children and adults all settled in for Saturday's packed-house matinee showing of Disney's The Little Mermaid, were in turns bored, increasingly testy and ultimately greatly disappointed when after waiting for more than 30 minutes for the show scheduled for 2 p.m. to start, instead were greeted with the announcement that the performance was canceled.

And yes, there were some crying children, as the Houston Press can attest to since we were among those eager to see the show which has garnered stellar reviews.

The matinee and night performances were canceled Saturday due to what was described as "a potential breakthrough COVID-19 case," according to a statement released by Theatre Under the Stars Artistic Director Dan Knechtges a few hours later.

Update 9 p.m.: The Alley Theatre canceled its two performances scheduled for Saturday, tweeting that a person working on A Christmas Carol tested positive for COVID-19. This is another show that has attracted widespread acclaim from audiences and critics.

These are the times we live in. And TUTS and the Alley, like other performing arts associations are diligently trying to ensure the safety of audiences, cast members and crew.

Audience members at The Little Mermaid matinee were told how sorry TUTS was, and that rescheduling and refunds were available through the box office — but no reason was given for the cancellation, which led to more questions and grumbling. Although there was hardly any way anyone was going to be happy after coming out to see Little Mermaid on a bad weather day complete with steady rain, occasional downpours, thunderstorms and some street flooding — and then not seeing it.

Prior to the announcement there had even been waves of rhythmically clapping patrons calling for the show to start. Audience members kept checking their cell phones —  maybe something had been posted online.

In the end, all they could do was step back out into the rainy weather and get into their cars. "Yes, I know it's sad," one mother was overheard saying to her young daughter — a statement probably being delivered throughout the building and on some very long, possibly whine-filled rides home.

But, tomorrow is another day and the show must go on. According to Knechtges: "We plan to resume performances on Sunday with the 2 p.m. matinee."

Here's hoping the sun will come out tomorrow.
KEEP THE HOUSTON PRESS FREE... Since we started the Houston Press, it has been defined as the free, independent voice of Houston, and we'd like to keep it that way. With local media under siege, it's more important than ever for us to rally support behind funding our local journalism. You can help by participating in our "I Support" program, allowing us to keep offering readers access to our incisive coverage of local news, food and culture with no paywalls.
Make a one-time donation today for as little as $1.