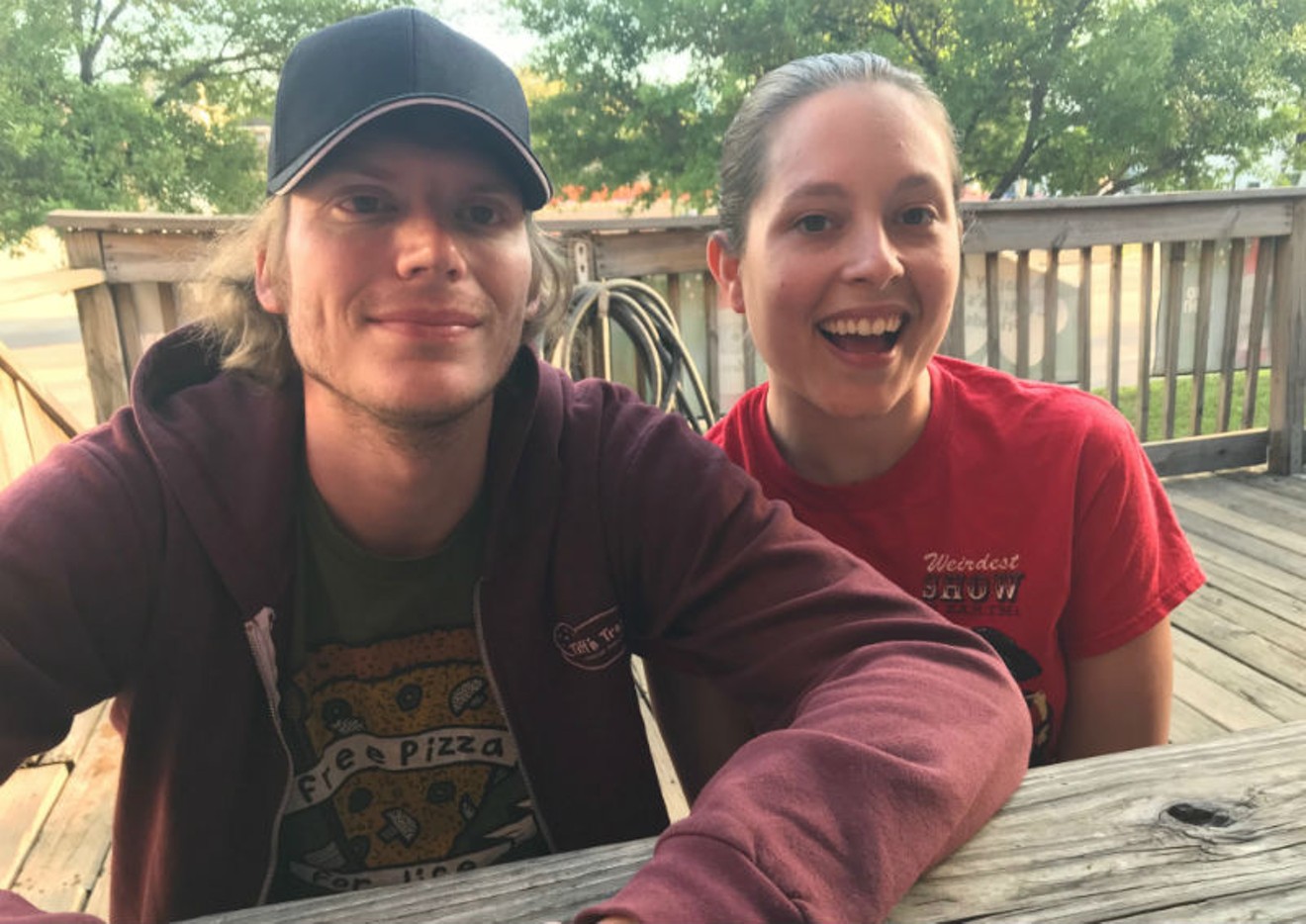 We’re an hour into our conversation with Stephanie Fisher and Josh Rollins when they make an unexpected announcement.

“We’ve been out of weed for about a week,” Rollins says.

“And we’re going to buy more after this,” Fisher informs us.

“I was real irritable from like Wednesday of last week ‘til Monday,” Rollins says, taking a sip from the dry cider he’s been nursing here on the patio at Cecil’s Pub. “Yesterday was a great day because I was sober, which probably means I should smoke less,…or, buy weed more often.”

The latter is the only true option for Fisher and Rollins who are comedians, weed enthusiasts/advocates and the co-hosts of the Pot & Plot podcast. The homegrown program features the couple’s cannabis-infused commentary on movies they’ve watched while high. We confirm the blueprint: stoned watching the movie and stoned while reviewing it?

“We are stoned always,” Rollins adds.

The program bowed in 2016 and is fast approaching its 50th episode. Many of the installments feature guests, like writer and musician John Wayne Comunale, rapper Brian Is Ze and John T. Razzmatazz of Space City Chronicles. Next Tuesday, Pot & Plot takes its show on the road by presenting its first-ever live episode at PJ’s Sports Bar. They’ll be viewing and reviewing the 1997 comedy Good Burger. The night will feature sketches, a reading by Razzmatazz from his zine, God Bless You Mr. Good Burger, and burgers slathered in “Ed’s Special Sauce.”

Just mentioning burgers sends Rollins on a weed-related tangent, one which epitomizes the positive life-altering effects of marijuana.

“I went to a burn one time. I was super-high and this dude started walking around just giving people cheeseburgers and I, up until that point, hated cheese on a burger,” Rollins notes, adding that he was converted that day. Fisher says she had a similar experience. After hotboxing with friends, she learned that honey mustard was a delicious condiment for chicken nugget dipping.

"It’s just basically me and my boyfriend, we watch a movie and then we get high and talk about it," says Fisher.
Artwork by Ned Gayle, courtesy of Pot & Plot

The appeal of the podcast is evident in the two hours we spend at the bar getting to know the couple. They engage in comfortable, quick-witted banter with comedy skills honed at Station Theater, where they first met. Rollins said he pursued Fisher romantically for a year and she says he won her over. They seem to be a natural fit. For instance, she is the planner. She researches the podcast’s films and prepares copious notes for every episode. He flies by the seat of his pants, but does all the technical production work to give the program its crisp sound. A typical episode takes about five hours to produce and each features segments including a basic set-up called “Plot, Plot Cast” (“Instead of puff-puff-pass,…it’s a play on words,” Fisher says proudly); “The Spark” (meant to spark conversation about the film); and, the self-explanatory “Burning Questions.” The show can be found on iTunes, Stitcher and similar podcast platforms.

Both are former theater kids and lifelong comedy fans. Rollins was raised in Dallas by a single mom who allowed his interest in Howard Stern and Opie and Anthony by ensuring he didn’t take them too seriously. He eventually went to broadcasting school. Fisher grew up in Houston and said her father showed her films by classic comedians like Steve Martin and Gene Wilder, which got her hooked.

“I really knew I wanted to do it because I did a little stand-up set in my room for some of my friends. My mom went in there and introduced me and I went in and told my jokes and they all laughed,” she recalled. “I liked being in the spotlight. If I auditioned for a play, they’d give me the part with the most lines. I was the narrator so much in a play because I could remember all my lines and I had a personality and I liked being up there.”

Rollins said he too performed for his family as a kid, but his best early material was delivered in the classroom.

“I was always a silly kid doing silly things before I even knew what pot was,” he said. “I also was – not to pat myself on the back – but, like, a bit advanced in school. I also liked to speak my mind a lot but I quickly learned as a kid that when you speak your mind you have to have some positive spin to it. So, if you can make a joke out of it, even though you’re still calling people out on their behavior, they’re a bit more receptive if it’s a joke than they are if you’re like, ‘You’re a terrible teacher.’”

Each says they never smoked until they were in their 20s. They see the serious side of cannabis issues, too. When we note how state lawmakers may slowly be shifting their attitudes on marijuana, the Harris County district attorney gets a shout-out (“We voted for her…my girl, Kim!” Fisher exclaims) and Rollins notes, “The CBD law in Texas is bullshit. You have to have a very specific type of epilepsy and you can only get CBD which has no psychoactive quality.”

Their advocacy for recreational weed offers a glimpse of their repartee. They tell us about a recent trip to Denver. Go with the pre-rolls and edibles if you don’t have friends there with the proper accoutrements, they advise. Or, you could join a weed club and use its amenities. Fisher says she still carries her Studio 420 membership card in her wallet.

“We loved Denver. We found out all kinds of stuff that we didn’t know existed in the weed world because it’s not legal here. It made sense, though. I didn’t know Snoop Dogg had his own kind of weed. Or, Willie Nelson had his own pre-rolled joints,” she said.

“Willie Nelson’s pre-rolls are way too tight,” said Rollins, shaking his head. “They’re really hard to hit. We didn’t like those as much.”

“We basically had to break them open to get some out,” Fisher jumps in.

“I think his brand has actually been seen as kind of one of the worst of the pre-rolls,” Rollins rolls on.


We ask them a series of questions, which we call “quick hitters.” Without missing a beat, Rollins dubs them “one-hitters.” We ask which is the best movie to watch stoned. Rollins picks a direct-to-video thing called Collision Course, which starred Jay Leno. Fisher does her Leno impression for us right there at Cecil’s. It’s pretty spot-on, considering she hasn’t smoked in a week.

“It’s not a good movie. Sober, that movie is terrible,” Rollins notes. “But stoned? So funny.”

“I wanna say a movie that I love stoned – Kung Fu Hustle. Also, not stoned – Kung Fu Hustle,” Fisher says. “That was my go-to stoner movie for a long time. I could remember the first half of that movie so well and then somewhere in the middle or the end it would get lost to me so I’d watch it again and it’d be like a brand new movie every time because I’d be high and couldn’t remember the end.”

“One-hitter is the best name for this segment because, like a one-hitter, it’s got like four hits in it,” Rollins quips.

“It’s so bad,” Rollins chimes in. “The movie couldn’t be saved by the fact that it had John Leguizamo and Natasha Lyonne in it. That’s how bad it was.”

Worst stoner movie? Neither can summon up one, though Fisher deems Half-Baked the most accurate of the genre.

“I can’t think of any specific movies. I just don’t like it when pot smoke is left in a bong. You clear your fucking bong, you dick,” Rollins grumped. “Or when people take like a two-second baby hit and start coughing forever,…or when they take a hit and are immediately so high.”

Fisher picks Jason Mantzoukas as celebrity she’d most like to smoke with and Rollins says he would pity smoke with Jennifer Aniston.

“She smokes a lot of weed. It’s why I felt so bad for her that Brad Pitt left her for Angelina Jolie because Brad Pitt smokes a fuck-ton of weed. Not only did she lose her husband in, like a cheating situation, she lost her best friend with, like, pot. We’ll go with Jennifer Aniston because a lot of people don’t know that she smokes all the fucking time.”

Like this conversation, the show is an organic mix of information (“Pro tip – smoke naked. If you smoke in the shower you have no residue or anything,” Rollins says) ridiculous stories (“I thought I saw a little kid in a lion costume,…it was a traffic cone,” Fisher shared about a hallucinatory high) and marijuana praise (“Pot brings people together. Pot definitely gets people to put aside their differences and talk to each other,” according to Rollins). They believe it all makes for an intoxicating blend.

“Honestly, the podcast came to be because we both realized we like to watch movies, we like to smoke weed – those are two things we were already doing,” Fisher said. She told a friend about it early on and learned just how relatable the concept is. “I told him, it’s just basically me and my boyfriend, we watch a movie and then we get high and talk about it. He was like, ‘Oh my God, I’m gonna listen to that because that’s what me and my girlfriend do.’”

Pot & Plot presents Good Burger Live, 7 p.m. April 24 at PJ’s Sports Bar, 614 W. Gray. Tickets are “pay what you can” and should be purchased in advance to ensure enough of “Ed’s Special Sauce” is concocted for the evening. “Please don’t bring any pot to PJ’s,” said Rollins, who advocates for responsible pre-gaming and ridesharing.