The Weird Wunsche Graveyard in the Shadow of I-45 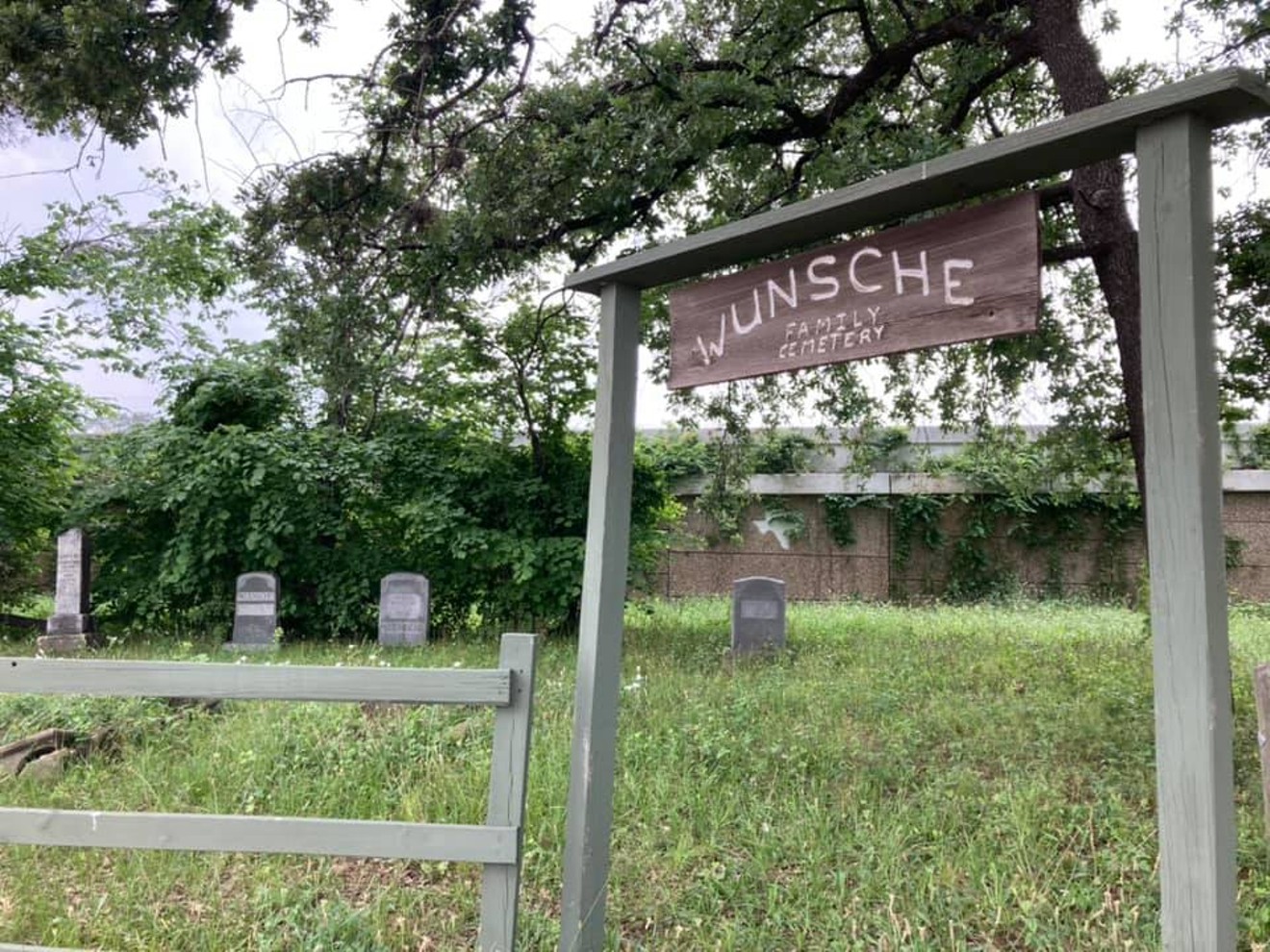 The entrance to the Wunsche Family Cemetery on the I-45 feeder Photo by Jef Rouner
In a city that is well known for treating history like it’s a rotting tree stump in need of dynamiting to build as sweet-ass dirt bike ramp, I have a particular fondness for graves. Specifically, the ones that somehow endure in strange places when all sense says they should have been destroyed and/or forgotten.

In 2018, that’s how I found the lost lonely chapel of Nancy Adleman, but today’s cemetery find is far from the beaten path. In fact, it’s literally butted up against one of the biggest freeways in Houston, I found it when I was on an errand to secure a PlayStation 5 from the trunk of a dude’s car in a transaction that was probably legal. When I exited I-45 on the way to Spring at Holzwarth, I noticed a tiny parking spot on the feeder and a wooden sign overlooking a small set of tombstones. 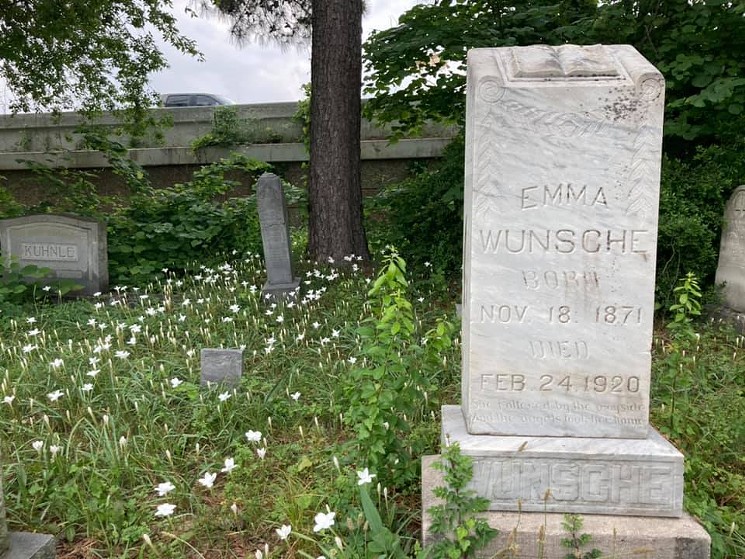 Emma Wunsche's stone is the most beautiful in the graveyard
Photo by Jef Rouner
Appropriately located within walking distance of the National Museum of Funeral History, the small plot of land between the feeder and the elevated freeway is the historic Wunsche Family Cemetery. Those who live in Spring likely need no further explanation, but for the rest of Houston here’s the history:

Sometime in the 1840s, a German immigrant names Carl Wunsche came to the new town of Spring when it was still mostly a trading post. The subsequent boom years brought by the International and Great Northern Railroad being built made the Wunsche family wealthy and influential as Spring became known for its sawmills and sugar cane production. Today, a high school bears Carl’s name, and the famous Wunsche Bros. Café founded by Charlie and Dell as a saloon for lumber workers still serves great hamburgers to this day though it’s no longer owned by the family. 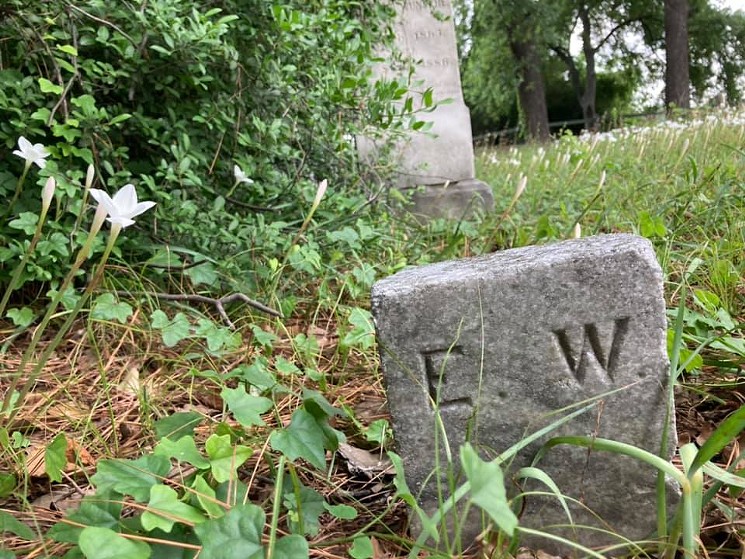 One of the miniature gravestones
Photo by Jef Rouner
It’s not surprising that there is a reverence for the Wunsches that might end up even with a mighty freeway making way for their dead. The segment of I-45 in the area was one of the last pieces of the freeway built in Texas, and wasn’t opened fully until after the last person, Juliane O. Wuensche (both spellings are used on the stones) was interred in 1959. Considering that the construction of the freeway involved a supremely complicated absorption of the old 75, there must have been at least one fight about what to do with this tiny bit of trees and the dead.

Whatever happened, the Wunsches prevailed, and the cemetery stands as a weird, slightly dangerous place to visit. Pulling out of the small bit of pavement to get back to the feeder is hair raising, and crumpled bits of guardrail on the exit are a stark reminder of what happens if a driver isn’t paying attention to what’s in front of them. 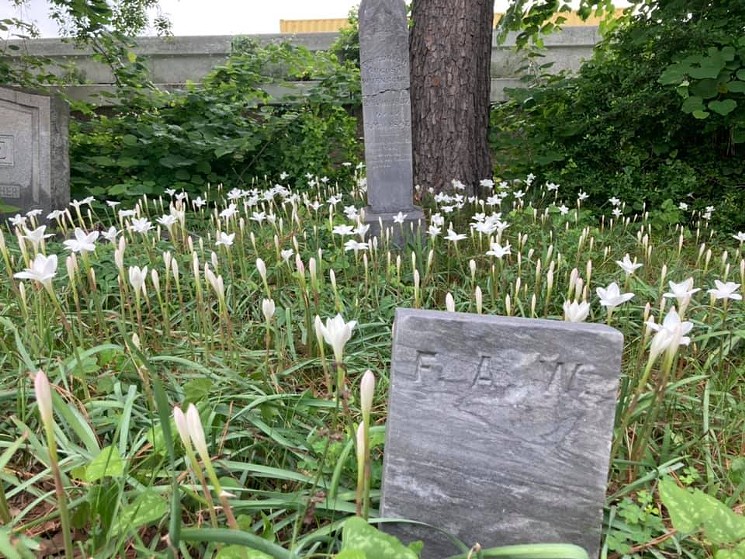 The freeway traffic above the cemetery is omnipresent

The place is bizarrely beautiful, though. Most of the stones have survived well, although three aboveground crypts have either been smashed or collapsed. It’s clear that the land is not regularly tended as the grass is high and some of the stones have been overtaken by baby’s breath, rain lilies, and the occasional blackberry bush. There was remarkably little trash in the cemetery considering that it is literally between two busy roads. It only took me a few minutes to do basic cleanup.

The stones in the graveyard are some of the most beautiful I’ve seen in my many cemetery treks. The crowning achievement is a marble obelisk dedicated to Emma Wunsche, who died when she was just 48 in 1920. Her stone is taller than I am and topped with an intricate carving of a Bible. The texts reads, “She faltered by the wayside, and the angels called her home.” There may be no more fitting message to read next to a freeway. 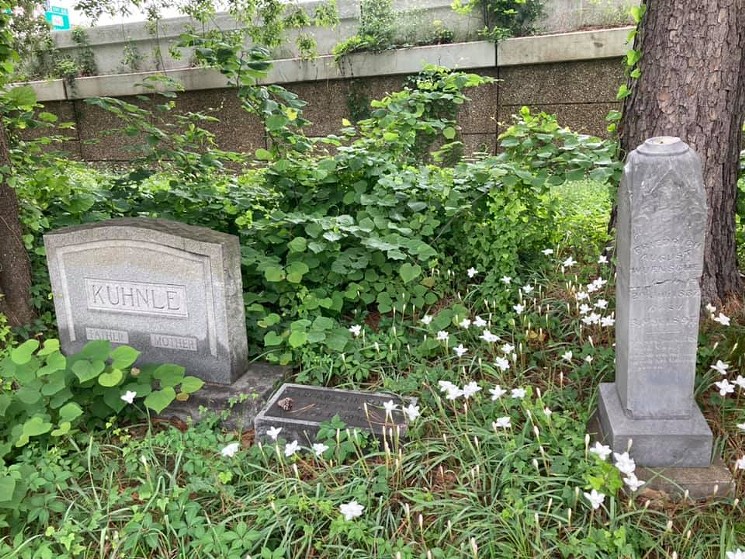 The only stones without the Wunsche name
Photo by Jef Rouner
The thing that really intrigued me were the collection of miniature tombstones, some no bigger than an iPad. These bore only initials without dates or any other information. They were arranged haphazardly, without any indication of who they were or why they were laid to rest in those spots. As the cemetery was clearly the work of a closely-knit family that took clan remembrance seriously, these presumably were well remembered once upon a time. I picked a small bouquet of flowers to leave on one of these almost hidden markers.

The one that moved me most was simply titled Our Darling. It was the resting place of the infant son of Alvin and Julia Wunsche who died in 1941. Such massive stones for children not even old enough to be named were fairly uncommon and spoke to a tremendous love. 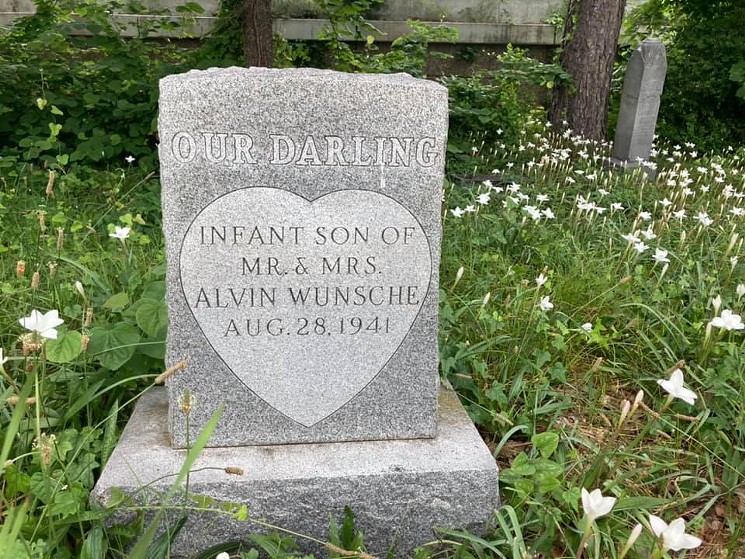 The grave of an infant boy
Photo by Jef Rouner
Curiously, the baby’s parents are not in the cemetery. In fact, most of the famous Wunsches are not buried there. Apparently one of the destroyed crypts belongs to Carl, but Charles is over in the Budde Cemetery. There have been sporadic attempts to clean up and maintain the area, particularly by historian Margaret Mallott Smith, but the days of actually burying people there are long gone.

Which is almost a shame. Yes, it’s a weird and slightly depressing place to spend eternity, but it’s also somewhat triumphant. The little clearing is surrounded by modernity, but still holding it back through sheer force of familial honor and love. The area smells of stone dust, burnt engine oil, wildflowers and, on the day I visited, threatening rain, but I could think of no better fragrance to sum up this city. A memory endures there, even as the freeway surrounds it and tries to consume it like a white blood cell. It’s a grand place for existing, and worth the stop to contemplate what history means under its proud trees.
KEEP THE HOUSTON PRESS FREE... Since we started the Houston Press, it has been defined as the free, independent voice of Houston, and we'd like to keep it that way. With local media under siege, it's more important than ever for us to rally support behind funding our local journalism. You can help by participating in our "I Support" program, allowing us to keep offering readers access to our incisive coverage of local news, food and culture with no paywalls.
Make a one-time donation today for as little as $1.