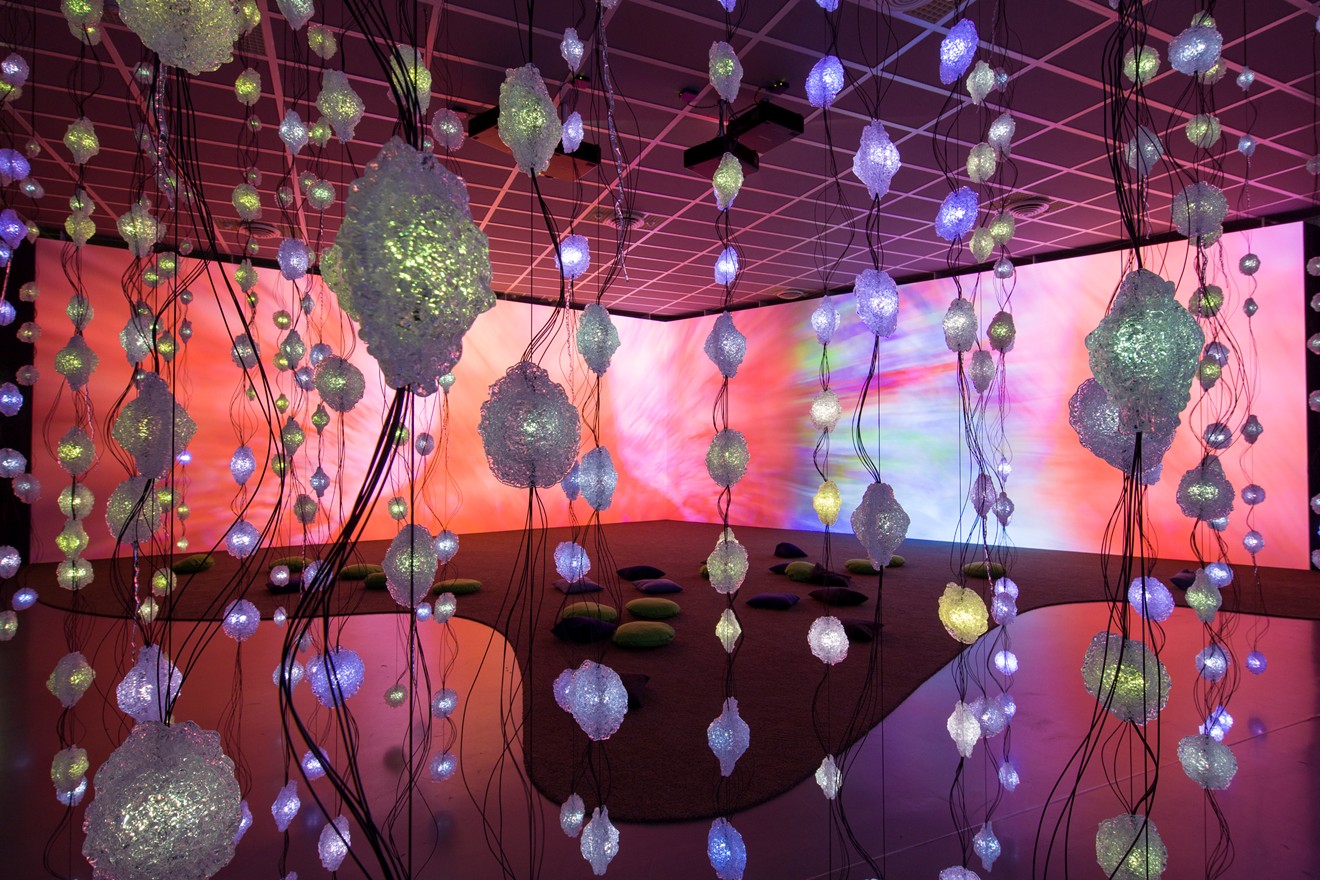 Pixel Forest Transformer, by Pipilotti Rist, is an LED installation with media player on view at the Museum of Fine Arts, Houston, June 11 through September 17, 2017. Photo by Mancia Bodner, courtesy of Kunsthaus Zürich
Last year's Yayoi Kusama exhibit was the epitome of cool. The Instagrammer's dream had us clamoring for those highly coveted and timed spots inside the polka-dotted and mirrored stalactice/stalagmite cave of Love Is Calling and the incandescent, but fleeting, fireflies of Aftermath of Obliteration of Eternity.

So how does the Museum of Fine Arts, Houston, top last summer's blockbuster? It's another light show for sure, but the comparisons end there. "With Kusama, it was instant. That is what Kusama wanted you to have," says Alison de Lima Greene, the Isabel Brown Wilson Curator of Modern and Contemporary Art at the MFAH and organizing curator of "Pipilotti Rist: Pixel Forest and Worry Will Vanish."

"With Rist, she admires Kusama profoundly and will be the first to say so. But her own aesthetic is for a slower, more temporal experience," says Greene. It's also an embracing environment, with pillows on the floor so visitors can set up camp and watch thousands of hanging LED lights change color and rhythms.

Greene tells us that, for a similar show in Europe, feather beds were provided for visitors. "In America, feather beds are not as common and in Houston, the last thing you want to be is in a big warm quilt in the summer. We changed it to be more compact."

Artist Pipilotti Rist helped direct the installation of Pixel Forest Transformer at MFAH, which transforms the central gallery of Cullinan Hall into a cosmic journey through time and space.
Photo by Mancia Bodner, courtesy of Kunsthaus Zürich
The Switzerland-born Rist is no stranger to collaborations. She was once in a band (Les Reines Prochaines/Queens of the Knives) and built on her early successes with single-channel videos, evolving to two-channel projections and more recent works that combine objects, environments, images and light. "Primarily, she is a pioneer of video techniques and has been completely on the forefront in advances in digital technology," says Greene.


"Primarily, she is a pioneer of video techniques and has been completely on the forefront in advances in digital technology," says Alison de Lima Greene.

Pixel Forest Transformer is a 2016 collaboration with lighting designer Kaori Kuwabara. It's also a recent acquisition for MFAH, funded by the Caroline Wiess Law Accessions Endowment Fund, though the installation viewed by Houston audiences will be unique.

"We’re very lucky that the artist is here to work with us. She is very much a collaborator. Several people from her studio are here," says Greene. "Although this work has been shown elsewhere she’s very actively engaged at making it special and unique to the architecture of Cullinan Hall. We’re going to have a large curtain in front of the hall to control the natural light; a deep forest green."

Lighting designer Kaori Kuwabara collaborated with Rist in creating Pixel Forest Transformer, where thousands of hanging LED lights are controlled by a video signal, with lights sometimes shifting in a staccato rhythm and sometimes in waves of color.
Photo by Maris Hutchinson, EPW Studio, courtesy of New Museum
Also on view this summer is Worry Will Vanish Dissolution, a 2014 video designed to be projected into a corner, allowing viewers to become part of an environment. "It is a dream state with a narrative. The video opens in a forest environment. All of this very abstract," says Greene. "The camera closes in on the image of a woman sleeping and then you go down the rabbit hole like Alice. [It has] fantastic imagery of the interior of the body which she then blends with imagery of the seas and the cosmos and ultimately it’s all about the body being one with nature and the greater world at large and the joy that comes with that." 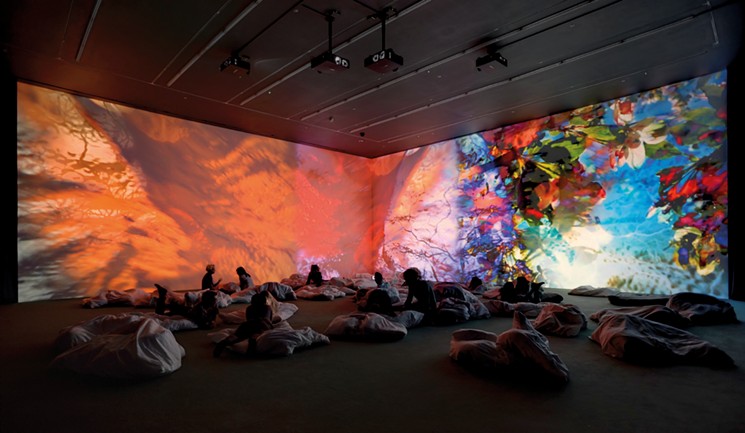 Also on view this summer is Worry Will Vanish Dissolution, by Pipilotti Rist, a two-channel video and sound installation (ed. 3/3) that wraps the corner in a cosmic embrace.
Photo by Alex Delfanne
"In Europe in general and in Germany and Switzerland in particular you have a much greater connection with nature," says Greene, who adds that Europeans feel that nature is essential to health and well-being, similar to the Colorado mindset.

"In Houston everyone hides indoors all summer long," she notes. "We thought that having this sort of wonderful journey into nature will help people reconnect with that aspect." The two-channel video runs in ten-minute cycles and is accompanied by a soundtrack, created in collaboration with Anders Guggisberg.