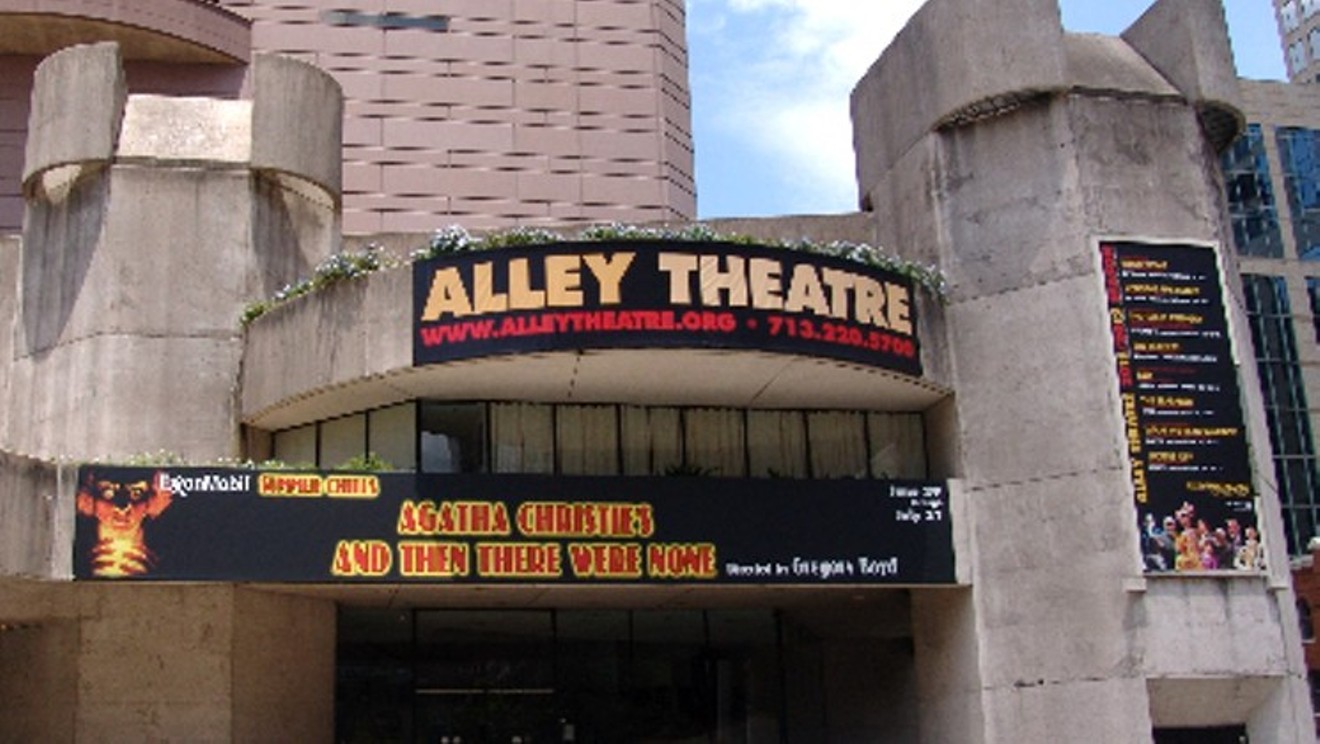 Theater community calling on the Alley Board to stop hiding in silence inside these walls and come clean about severance payment/harassment allegations. Houston Press file photo

That’s the amount that the Alley Theatre Board paid out to former Artistic Director and alleged sexual harasser/toxic bully Gregory Boyd, according to a recent Houston Chronicle story. The severance payment was a result of Boyd negotiating his retirement, according to Nancy Sims of Pierpont Communications, a public relations firm hired by the Alley and the only one presently speaking to media. But the payment does make murky the Alley’s position that Boyd had planned to retire and was not forced to step aside.

For Houston’s theater community, it doesn’t really matter how the payment came about. They’re repulsed and furious by what they believe is a shady deal that further victimizes anyone he may have harassed, harms the Houston theater ecosystem and takes funds away from other theaters that so desperately need the money.

Classical Theatre Company Executive Artistic Director, John Johnson acknowledges that there are most likely a slew of legal/contractual matters involved that may have tied some hands at the Alley, but even still, he believes it reflects poorly on the company.

“The man's tenure at the Alley was considered by those who worked with him, almost unanimously, as a reign of terror. He verbally and psychologically abused those under him, says Johnson. “Publicly, the idea that funds donated to a non-profit would be used as a severance package to a man who perpetrated almost three decades of abuse seems inappropriate at best. I try to imagine what it would be like to have been victimized by him for years only to see him rewarded so generously. I'd wager that it would be pretty hard to swallow.”

Kim Tobin-Lehl, Artistic Director of 4th Wall Theatre Company, is livid at the thought that potentially some public funds were used in Boyd’s payoff, therefore lessening the money available for other companies. “The Alley Theatre is supported in part by the city and state of Texas,” says Tobin-Lehl. “Paying a severance package to Greg Boyd with those funds risks those funds for everyone.”

Jennifer Decker, Artistic Director of Mildred’s Umbrella looks angrily to the potential that donor money could have been used to fund Boyd’s severance. “I don’t know how common a payoff like this is for someone who is retiring, but if the rumors that he left because of abuse and misconduct are true, it does make me angry that donor money has been used in this way,” says Decker. “The Alley has all the Houston heavy hitters on their donor list that many of the rest of us don’t have access to, so (the severance) seems like a huge waste of resources to me. $380,000 funds my theater for over three years.”

In addition to the money spent, Tobin-Lehl is frustrated by the Alley board’s silence on the matter of Boyd’s alleged abuses. “We have gone 15 days without a statement or an apology from the Alley Board,” says Tobin-Lehl. “We feel like the Alley Board needs to lead by example and right now they are not.”

Co-Artistic Director at 4th Wall Theatre Houston, Philip Lehl, who is also disturbed by the board’s silence and use of money in this matter, is looking one step further. What can the community do? “How do we demand transparency and the necessary apologies from this callous board?” asked Lehl, who put the question out there on his Facebook page.

The responses from the artistic community have ranged from outright Alley boycott suggestion to petition writing to attending the company’s public meetings and demanding answers, but as yet these suggestions haven’t manifested into real action.

Meanwhile, in just two days the Alley is set to begin performances of The Great Society in partnership with the Dallas Theater Center. Hanging over this production are not only the unaddressed allegations against Boyd and the anger at the Alley Board, but another scandal to boot. In December, Dallas Theater Center’s Director of New Play Development, Lee Trull, was fired following allegations of sexual misconduct, making The Great Society a show lugging behind it a full set of undesirable baggage.