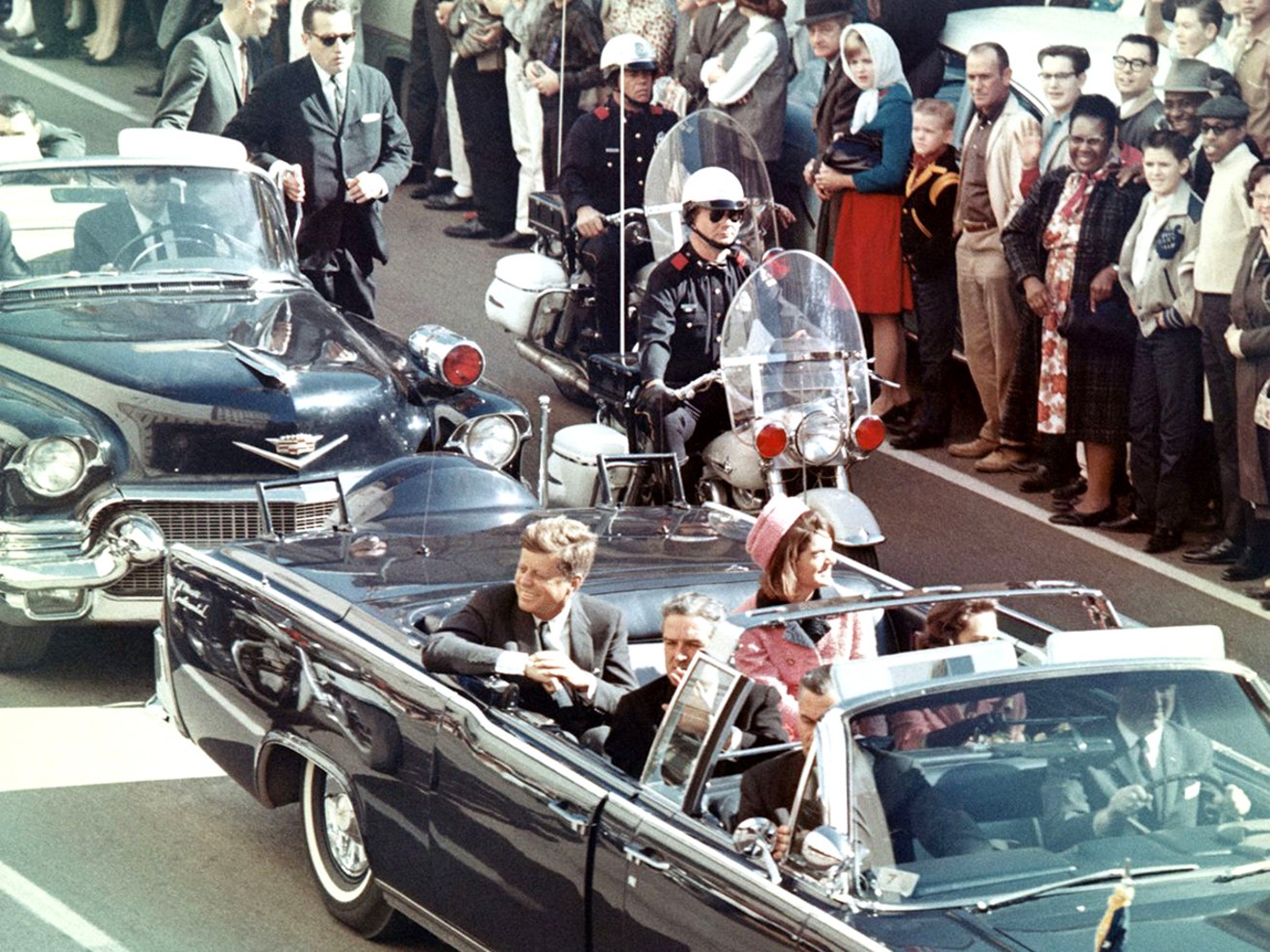 Our modern-day version of Camelot ended on November 22, 1963. The president isn't buried here, but his alleged killer is, as well as another one of his victims and the man who captured the moment on film. Photo by Walt Cisco, Dallas Morning News (public domain)
This summer we're taking a look at interesting, odd, historic and just plain worth it road trips in and around the Lone Star State.

We know where the bodies are buried. Texas is the eternal resting place for Bonnie and Clyde, Freddie Fender, Howard Hughes and perhaps even a space alien. From the incredibly sad story of infanticide, to more than a few tragic deaths of musical greats, here's our look at the famous and infamous graves of Texas.

Clyde Barrow
The doomed lovers went out in a flurry of gunfire and this half of the notorious "Bonnie and Clyde" bank robbing team is interred in a family plot in Dallas; Bonnie is buried across town at Crown Hill Memorial Park.
Western Heights Cemetery, Dallas 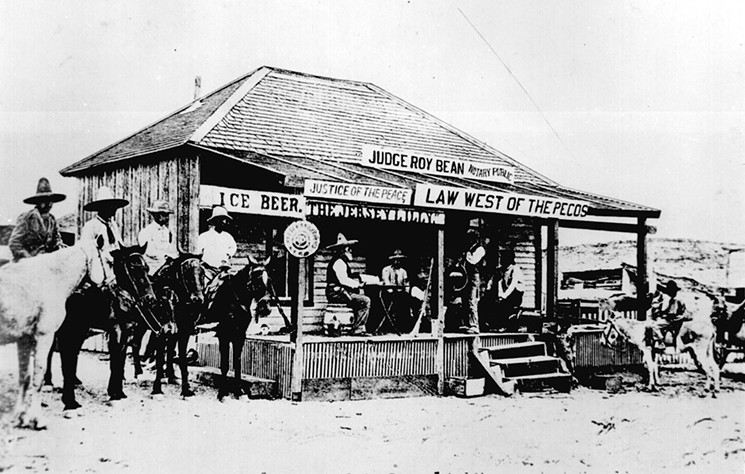 Judge Roy Bean is shown holding court in Langtry in 1900, trying the case of an alleged horse thief.
Photo by Marion Doss via CC
Judge Roy Bean
Judge Bean's own brand of justice included holding court in a saloon, right next to the billiard tables. Originally buried in Westlawn Cemetery, the bodies of the judge and his son were later moved to the grounds of the Whitehead Memorial Museum.
Whitehead Memorial Museum, Del Rio

James Bowie, David Hawkins Stern "Davy" Crockett and William Barret "Buck" Travis
These important figures of the Texas Revolution lost their lives on March 6, 1836. Some believe that the ashes of these Alamo defenders are in a coffin at the San Fernando Cathedral, though it's more likely that the cremains were buried under a forgotten peach tree grove near the Alamo.
San Fernando Cathedral or near the Alamo, San Antonio

Ann B. Davis
The hardest working housekeeper in television always kept a smile, though cooking, cleaning and doing laundry for a family of eight is enough to send anybody to an early grave.
Saint Helena's Columbarium and Memorial Gardens, Boerne

John Wesley Hardin
Gunfighter John Wesley Hardin reportedly killed more men than Billy the Kid or Jesse James and has been labeled "Wild West's No. 1 Killer." His career took a few twists: After killing more than 30 men he served 15 years in prison for murder, was pardoned, and opened a law office in El Paso. He was killed three months later.
Concordia Cemetery, El Paso

Charles Hardin Holley ("Buddy Holly")
We're not sure if Holly's grave is truly haunted, but there have been enough rumors of "Peggy Sue" and lesser hits playing in the area that Darrell Maloney included it in his book, Haunted Lubbock: True Ghost Stories From The Hub Of The Plains.
City of Lubbock Cemetery, Lubbock

George Kelly Barnes ("Machine Gun Kelly")
This 1930s gangster and bootlegger knew how to work the media, but he never saw freedom again after entering Leavenworth Federal Penitentiary. After he died of a heart attack on his 59th birthday, his accomplice Boss Shannon asked that the body be shipped to Texas for burial.
Cottondale Texas Cemetery, Cottondale

Thomas Wade Landry
The fedora-wearing WWII veteran and Dallas Cowboys football coach made a personal commitment to Christ in 1959. The stoic Landry may not have been quick to crack a smile but he'll go down in the record books as one of the greatest NFL coaches of all time.
Sparkman-Hillcrest Memorial Park, Dallas

Mickey Charles Mantle
Baseball great Mickey Mantle was a Yankee during the entirety of his career, but the seven-time World Series champion and Baseball Hall of Famer was interred in Dallas after he died at Baylor University Medical Center.
Sparkman-Hillcrest Memorial Park Cemetery, Dallas

Joseph Don "Dandy Don" Meredith
Interestingly enough, Meredith was able to play in and around the Dallas area in high school, college and his pro career; he also was the first ever Dallas Cowboy. The quarterback, sports commentator and actor died in Santa Fe but was buried in Mount Vernon, where he grew up.
Mount Vernon City Cemetery, Mount Vernon

Lee Harvey Oswald
Only one cemetery would accept Oswald's body after he allegedly (if you believe conspiracy theories) assassinated President John F. Kennedy. Years later Patric Abedin, a performance artist who goes by the name Nick Beef, had a grave marker installed next to Oswald's, but he's still alive and has no plans to be buried there.
Shannon Rose Hill Memorial Park, Fort Worth 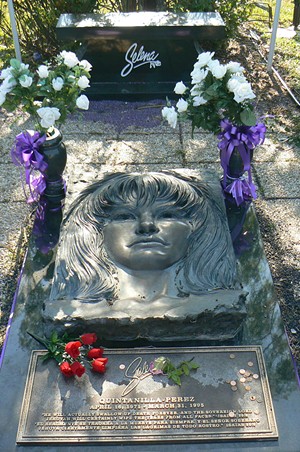 The grave site of Selena Quintanilla-Pérez, murdered on March 31, 1995.
Photo by Terry Ross via CC
Selena Quintanilla-Pérez
The Queen of Tejano music was gunned down, not by a stranger, but from Yolanda Saldívar, the manager of her chain of boutique stores. Saldívar became obsessed with the singer, embezzled funds from the stores and fan club and, after being confronted and asked to surrender financial documents, she mortally wounded Quintanilla-Pérez in a Corpus Christi hotel room.
Seaside Memorial Cemetery, Corpus Christi

James Travis Reeves ("Gentleman Jim Reeves")
This chart-topping singer-songwriter and Country Music Hall of Famer was known for his Nashville sound but he was born in Galloway, Texas and is buried in the Lone Star State. He died at the age of 40 when his private airplane crashed.
Jim Reeves Memorial Park, Carthage

Space Alien
It looks like we've got our own Area 51 right here in Texas. It's been reported that a cigar-shaped mystery airship crashed on a farm near Aurora on April 17, 1897. As the legend goes, the pilot — described at the time as both "otherworldly" and a "Martian" — was given a Christian burial and the wreckage was dumped into a nearby well. The incident was most likely a fabricated publicity hoax to drive business to the dying town but, nevertheless, a Texas Historical Commission marker has been placed outside the cemetery.
Aurora Cemetery, Aurora

J.D. Tippit
After President John F. Kennedy was assassinated in 1963 an all points bulletin went out and within minutes Dallas Police Officer J.D. Tippit pulled his squad car alongside Lee Harvey Oswald to speak with him. Oswald shot and killed the officer, ending his life but setting off yet another trail of conspiracy theories including speculation that the policeman not only looked like JFK but also suffered the exact same bullet wound to the head and that their x-rays had been swapped.
Laurel Land Memorial Park, Dallas

William Henry Roberts ("Brushy Bill" and possibly "Billy the Kid")
We know that a Texan named Brushy Bill is buried south of Hico in Hamilton, and we know that Roberts boasted late in life that he was really "Billy the Kid." There's a Billy the Kid Museum in Hico that wants to believe and a couple of grave sites in New Mexico that say otherwise.
Oakdale Cemetery, Hamilton

Stevie Ray Vaughan
Blues guitar legend Stevie Ray Vaughan and his band Double Trouble were on tour, opening for Eric Clapton. The night before he and members of his entourage were killed in a helicopter crash, it's said that Vaughan had a nightmare about being at his own funeral surrounded by thousands of mourners.
Laurel Land Memorial Park, Dallas

Mary, Luke, Paul, John and Noah Yates
The saddest entry on our list is the story of the five Yates children who were drowned by their own mother, Andrea Pia Yates, who had been suffering from depression. She was convicted of capital murder, a verdict that was overturned on appeal, and later found not guilty by reason of insanity. The Clear Lake housewife turned murderer resides at Kerrville State Hospital.
Forest Park East Cemetery, Webster

Abraham Zapruder
Democrat and JFK supporter Abraham Zapruder wanted to capture the presidential motorcade in downtown Dallas on his 8mm Bell & Howell movie camera. Standing on that concrete pedestal near the grassy knoll in 1963 he filmed 486 frames lasting 26.6 seconds, capturing the moment that the president was shot and resulting in what has been the most analyzed piece of film in cinematic history.
Temple Emanu-El Cemetery, Dallas 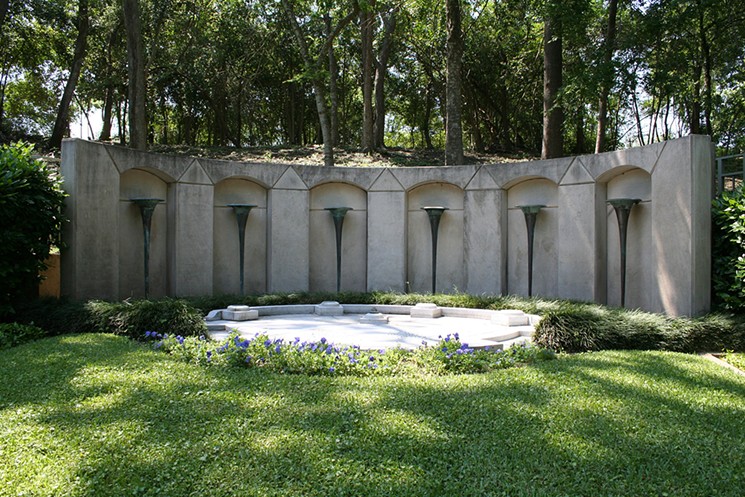 The late Howard Hughes is buried, along with his family, at Glenwood Cemetery in Houston.
Photo by Bobby L. Warren via CC
But the most awesome gravesites in Texas are right here in Houston. We've got Ben Taub, the philanthropist who changed our city's landscape; "The Handsome Half-Breed" wrestler Gino Hernandez; circus entrepreneur Mollie Arline Kirkland Bailey; aviator, tycoon and filmmaker Howard Hughes; silver screen celeb Gene Tierney; saver of souls Jack Yates; hellfighter Paul Neal "Red" Adair, and badass Sarah Emma Edmonds, who swapped both gender and race to fight the good fight. Our musician cred runs strong, too, with blues vocalist Kathryn Jewel Thorne and Sam "Lightnin'" Hopkins buried here. Read more in our 2013 story, The Rest of the Best: The 10 Most Awesome People Buried in Houston.
KEEP THE HOUSTON PRESS FREE... Since we started the Houston Press, it has been defined as the free, independent voice of Houston, and we'd like to keep it that way. With local media under siege, it's more important than ever for us to rally support behind funding our local journalism. You can help by participating in our "I Support" program, allowing us to keep offering readers access to our incisive coverage of local news, food and culture with no paywalls.
Make a one-time donation today for as little as $1.