Do Offerings Like [email protected] Signal Future Changes in the Way Theater Survives? 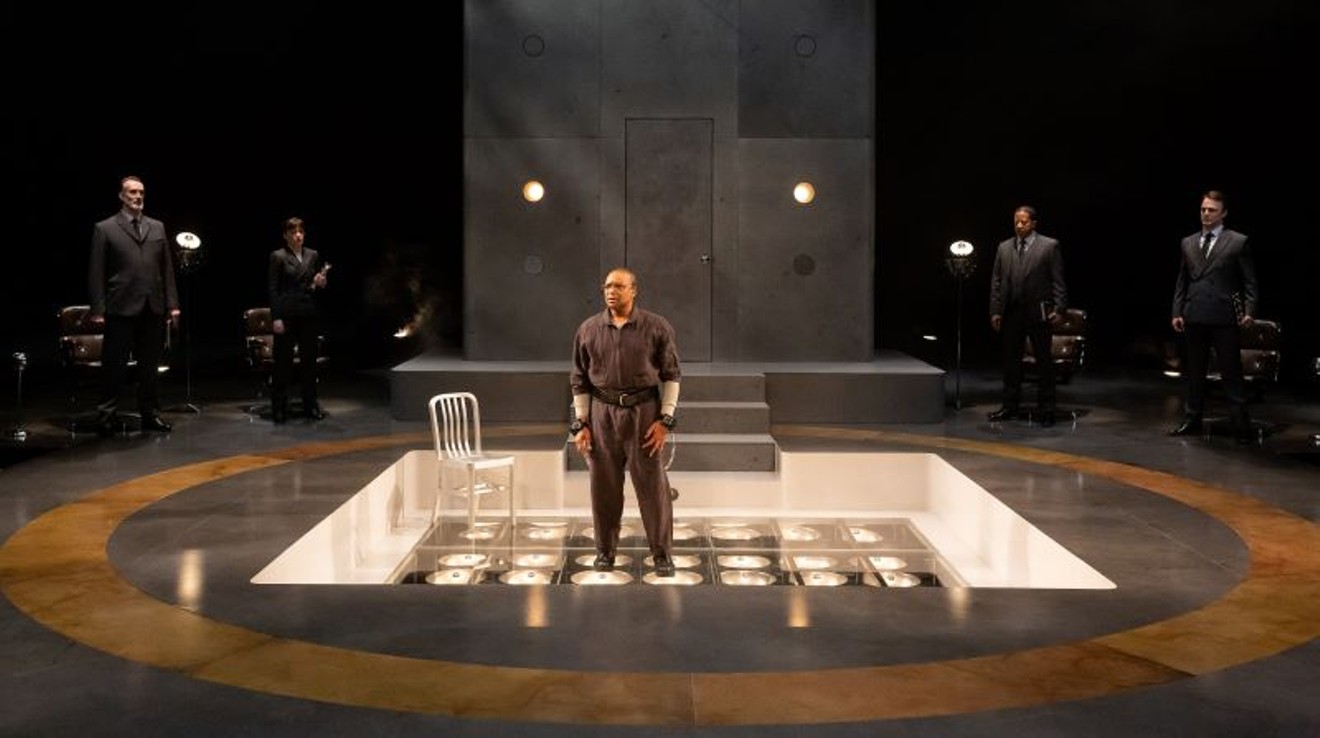 The production of 1984 that moved from the Alley's Hubbard Stage to viewers' homes. Photo by Lynn Lane

It was 1939 when NBC first televised an NFL game on TV (the Philadelphia Eagles lost to the then-named Brooklyn Dodgers). In 1956, CBS brought in regular Sunday pro football games. Rather than discouraging fans from attending games in person, the increasing availability of pro football on TV in the ensuing years launched a more rabid fan base, higher in-demand attendance at games and well, a juggernaut.

The question Rob Melrose, artistic director of the Alley Theatre, and other theater directors are mulling is whether the same magic can work for live performance theater, maybe not in exactly the same way but in some sense to build up a bigger audience of theater-goers by exposing them to something they might not be all that familiar with.

After all, just because the Metropolitan Opera shows filmed versions of some of its productions, doesn't mean people who like opera stop going to live performances. Opera lovers across the country can appreciate performances they might not otherwise get to see and for the novice, it's a less expensive way to dip a toe in that pond. And sometimes you just want to see how a different performer handled the same role.

When the Alley had to shutter 1984 prematurely because of the coronavirus fears, it was able to get a concession from Actors Equity which allowed it to film the production with three cameras and offer it for at-home screening a maximum of two weeks to ticket holders of the canceled live performances and others who wanted to buy in, the artistic director said.

The reaction was a more than pleasant surprise.

"People all over the country and the world watched it," Melrose said. "That got us excited being able to offer our shows live and at home for people not coming back to the theater yet." He said the Alley like other regional theaters are discussing future possibilities with Actors Equity. "So that we have something to offer when we're closed or just when people aren’t ready to come back to the theater and be able to expand our market."

Melrose said he thought at first that filming was forbidden, but actually the League of Resident Theatres, a group of about 70 theaters involved in collective bargaining for theaters, had negotiated a media-use policy. But it is so expensive that most theaters can't afford to use it because of all the extra payments they have to make to those involved, he said.

The Alley told them it would pay the actors as if they'd completed the whole run but wanted to to make up for the fact that they were not continuing to perform by showing the 1984 film  and have their weekly salaries be counted toward that. Costs were also borne by ticket buyers as well as support from donors and foundations, he said. And an agreement was reached.

Now LORT is talking to Actors Equity about a way to make a production like this more financially possible. "Before it was kind of okay, even though theaters in Europe have regularly filmed their shows for decades," Melrose said. "Our main business was live theater so we just didn't explore the possibility of videotaped performance but now in this new age, everybody's realizing this has to be a part of what we do. They're talking to Actors Equity and the other unions about 'Is there a way forward that makes sense to you and your members but also makes sense to us?'"

"Because some theaters are really going to have trouble surviving without some tweaks to the current model."

"Because some theaters are really going to have trouble surviving without some tweaks to the current model."


With [email protected], the Alley's resident company of actors started small with some Shakespeare sonnets they filmed themselves delivering, Melrose said. Next up: the actors reading eerie stories from Edgar Allan Poe and the like — in place of the usual Summer Chills production the Alley does most years.

Following that will be some work with more classical theater. "The thing I feel we’re lacking, and it's kind of the Alley's history, is doing the classics. Often the reason you can't do the classics is they’re too expensive and people don't know them as much. So one thing I'm trying to use Alley at home to do is these shorter classics. We'll do longer pieces. It'll be a way to share some really important pieces with our audiences. And get a sense of what they want to see on our stage. And also give the acting company a chance to keep their classical chops in order.  So we've got some good things on the horizon there."

At this point, [email protected] looks like a keeper for them, Melrose says in whatever future form it takes. Do they keep it all free? Do they make some of it free and put other offerings  behind a paywall for subscribers?

None of which works at all without the Alley's actors.

From the start of the pandemic shutdown, Melrose said, he wanted to get across to the eight resident company members how important they are."The very first day when the news hit that we were cancelling our season I said right now I don’t know what the solution to our problem, I don't know the specific solution. But I know you actors are going to be a key part of it.

"They knew that I understood their value and that I understood their core to this theater and our way out of the crisis was through them.   They felt valued and we’re going to do some great work together. That's really made them feel good and and giving them these projects. They've really put a lot of their creativity and energy into it. I really think they're doing great stuff. Our actors are used to doing five plays a year; they're used to being on stage constantly so they're like racehorses in the gates. You give them a project and they just seize on it. Their creativity is coming through."

The Alley is looking at the present situation in two different ways, Melrose said.

"What are we going to do in this time that we’re not in session? But we're also asking ourselves what are things we going to want to continue to do even when we're back in the theater?

"We’re doing a lot of cool things that we couldn't have done otherwise. We wouldn’t do the sonnets on the Hubbard stage, we wouldn't do short plays on the Hubbard stage; they're just too short but they're great and they're perfect for the internet. There are a lot of awesome plays I love especially classics that are great plays and people love them but they're not quite well known enough to fill a 770-seat theater night after  night but to do it on line is totally possible.

"So it's going to allow us in the future, this [email protected], it's gong to allow us to do a much wider variety of work and I'm excited about that."
KEEP THE HOUSTON PRESS FREE... Since we started the Houston Press, it has been defined as the free, independent voice of Houston, and we'd like to keep it that way. With local media under siege, it's more important than ever for us to rally support behind funding our local journalism. You can help by participating in our "I Support" program, allowing us to keep offering readers access to our incisive coverage of local news, food and culture with no paywalls.
Make a one-time donation today for as little as $1.