WorldFest-Houston Celebrates 50 Years of the Best in Video, Film and Commercials Screenshot of YouTube video by George Kenyon from Klutch Creative

Commerce is king, and there's no better proof than this year's WorldFest-Houston which, at 50 years old, is the oldest independent film and video festival in the world. A surprise to some – but not for those who make a living writing, producing, directing, filming and acting in television commercials and public service announcements – is the fact that this is the largest competition category in the annual fest.

From banking to baked goods, and from pharmaceuticals to political campaigns, there is a tremendous need for creative ways to get the message out to consumers and the viewing public. Not all TV ads make it on to the Super Bowl, nor should they with the accompanying price tag, but the selling of goods and services is an important element in maintaining a healthy economy.

We have to agree with last year's Remi winner of Best Television Commercial/PSA by George Kenyon from Klutch Creative out of Los Angeles. A little girl is watching combat-wounded veterans work out in a gym. She offers one of her Doritos to an athlete and then the camera pulls back to see how their persistence to overcome gave her just the right amount of courage to follow suit. 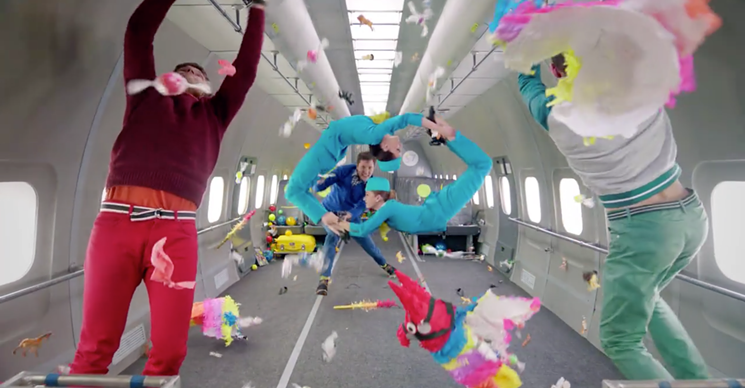 2017 WorldFest Remi winner in the Music Video category features OK GO in "Upside Down and Inside Out."
Photo by Geoff Shelton for Hank Films
WorldFest-Houston runs through April 30 at AMC Studio 30 on Dunvale. In addition to the 91 categories of commercials and PSAs (more when the 16 craft categories are added), the judges are giving out Remi awards to television and cable shows (somebody has to feed the hungry mouths of satellite and cable providers), music videos and – to keep up with the technology Joneses – websites, 3-D and other new media.

In the upcoming (and final) week of WorldFest-Houston, there is a screening every night. Fiction and documentary. Film and TV. The festival continues its annual Panorama China, screening 33 new films from China, all North American premieres and eight or more world premieres. The panorama showings survey Chinese cinema shorts, features and independent and major releases.

Reiner, progressive inside and out, spoke tenderly of the Texas-born U.S. president in his telephone interview with the Houston Press. “Everybody thinks of him as this tough guy who strong-arms people, got his way and was larger than life, but he was also very insecure and worried about people liking him and feeling loved,” said Reiner.

We also checked in with Hunter Todd, WorldFest chairman and founding director, about his selection of Houston as home base for the festival. “They’d say, ‘Hunnah, boy!’ — spelled H-u-n-n-a-h,” recalls Todd, mimicking the thick Texas accents of good ol’ Bayou City oil boys in Stetsons and cowboy boots. “‘Hunnah, you gotta come to Houston!’” In 1978, after five years of goading, Todd moved WorldFest to Houston. 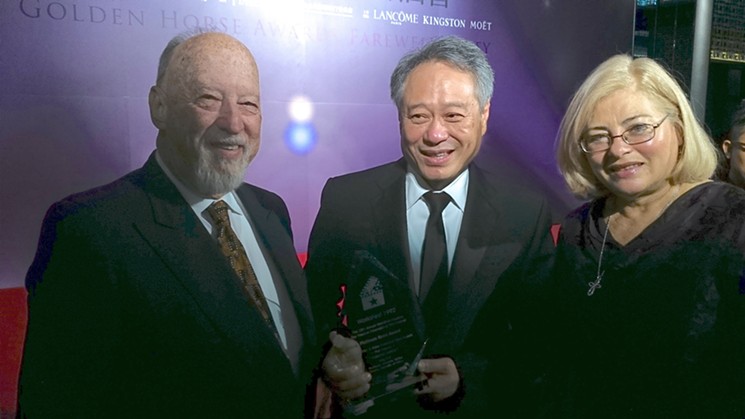 Hunter Todd, director Ang Lee and Kathleen Hanley (WorldFest artistic and program director) at a Shanghai film festival in 2015. Lee joked to Todd that he remembered two things from his decades-earlier win for his debut feature, Pushing Hands: WorldFest-Houston and his meal at Goode Company Barbecue.
Photo courtesy of WorldFest-Houston
This year's WorldFest-Houston is exhibiting media from more than 70 nations. Other festival categories include films and videos, as well as independent shorts, experimental films and videos, theatrical features and study films. “You get an amazing survey of interesting film people of every type,” says Hunter. “And it really creates an incredible synergy.”

Katricia is a contributing writer for the Houston Press who enjoys writing about the vast, vibrant Houston arts and culture scene.
Contact: Katricia Lang