Iced tea is a gracious beverage. It hints of endless refills and an infinity of time, and it's the right thing to drink at funky, laid-back Kaldi Cafe, where no one is ever in a hurry. Kaldi offers tea drinkers a nifty selection of flavors du jour -- ginger-peach, say, or herbal mint -- and because you fetch your own refills, you don't even have to feel guilty about abusing your waiter as you drain glass after glass.

The Twister, The Remington Grill

In our ardent quest for Houston's best martini, we asked several bartenders to define the drink. Of course, each gave us a different answer -- and all were correct. While there are some definite guidelines, a single definition does not exist. A generation ago, a martini was as cut-and-dry as its taste: gin and vermouth, shaken or stirred. A generation ago, Houston's highbrows were consuming the classic cocktail among their peers at places like The Remington Hotel. Flash forward to Y2K. Same locale. New hotel. Way different drink. The Remington has become The St. Regis, and inside The St. Regis lies The Remington Grill. In the center of the restaurant lies the bar, and at the center of the bar lies the crystal jar. Inside the jar is the delicately smooth Ketel One vodka. Suspended within the quadruple-distilled Dutch liquor is a single pineapple, peeled and cored, infusing its sweetness into the wheat-based vodka. Let renowned bartender Harry Spitzer create his Twister for you. He starts with a generous pour of his infusion into an ice-filled shaker, followed by a dash of margarita mix. After a vigorous shake, he pours the concoction into a frozen martini glass. And for those of you who've endured the first harsh sips of a martini, the Twister proves it doesn't have to be that way. Instead, you'll bliss out on the thin top layer of sweet, creamy froth and be drawn down into the citrus-clouded Ketel One that beckons below. Don't be deceived by its tropical taste, however. The Twister has the strength of a Category Five. Weighing in at slightly less than a pound, the Reuben ($6.99) at Kahn's Deli is a delicious way to exercise jaw muscles. It's a jungle of pungent sauerkraut, piles of corned beef and a thick layer of melted Swiss cheese that makes one wonder if any human can open their mouth wide enough to get a traditional bite. The Russian dressing is made fresh every morning using an old family recipe, and it's not spread on so thickly that the freshly baked rye bread gets soggy. (Unused bread is donated to a church to feed the hungry at the end of each day, so customers never get day-old bread.) Owner Mike Kahn got the recipe for the Russian dressing and the rye bread from his father, Alfred Kahn, the namesake of Alfred's Deli, which closed in 1994 after Alfred's death. They are continuing the family tradition, serving the same hefty, tasty and wonderfully messy Reuben.

La Tapatia Taqueria's poor boys are practically an entire Mexican meal between two fresh buns. Along with a belt-bustingly generous serving of one of 12 meats or a veggie, the sandwich is smeared with refried beans and sour cream. It also includes slippery avocado slices (which sometimes escape the sandwich when you're taking a big bite), lettuce and tomatoes. Shredded cheese is 25 cents extra. Some places like to skimp on shrimp. Not La Tapatia. The shrimp poor boy is loaded with medium shrimp that are cooked to where they're still firm and juicy, not soggy. The pastor (marinated pork) poor boy is similarly loaded, and its sweet-hot marinade makes the cooked-till-falling-apart pork a taste to remember. Other meats include chicken breast, beef, lean pork, barbecue, beef brains, lean breaded meat, goat, beef tongue and ham. And these poor boys won't plunder your pocketbook. The shrimp and chicken breast sandwiches are $3.75; the rest cost $2.70. True poor-boy prices.

3. Driving in the heat makes you crave big cold drinks.

Which is why you should drive to Bambolino's. Without leaving your car, you can buy a semifrozen lemonade for a piddling $1.29. At 32 ounces, the large serving is sufficiently big. And it's crushed-ice-cold enough to give you an ice-cream headache.

Pizza? At an Irish bar? We didn't think that made sense either. We were expecting DiGiorno or something far more frozen. But this homemade pizza is the best we've ever tasted. They've made it fresh every day for the past 11 years, and they almost always sell every slice they make. It's hot and greasy, and the cheese oozes off the pizza into your waiting, wasted mouth. One of the benefits of the pizza, we will admit, is probably that beer goes with pizza. It always has; it always will.

Normally Texans do not associate chicken-fried steak with a Cajun restaurant. Granted, the one served up at Treebeards -- best known for its red beans and rice -- is not the typical battered piece of meat smothered in a white cream gravy. Instead, this is chicken-fried like your grandmother used to make. This thick but tender piece of steak looks and tastes like it has been well worked over with a tenderizing mallet, battered and fried and then covered in dark gravy made in part from its own juices. The difference is divine. Available Monday, Tuesday and Wednesday. 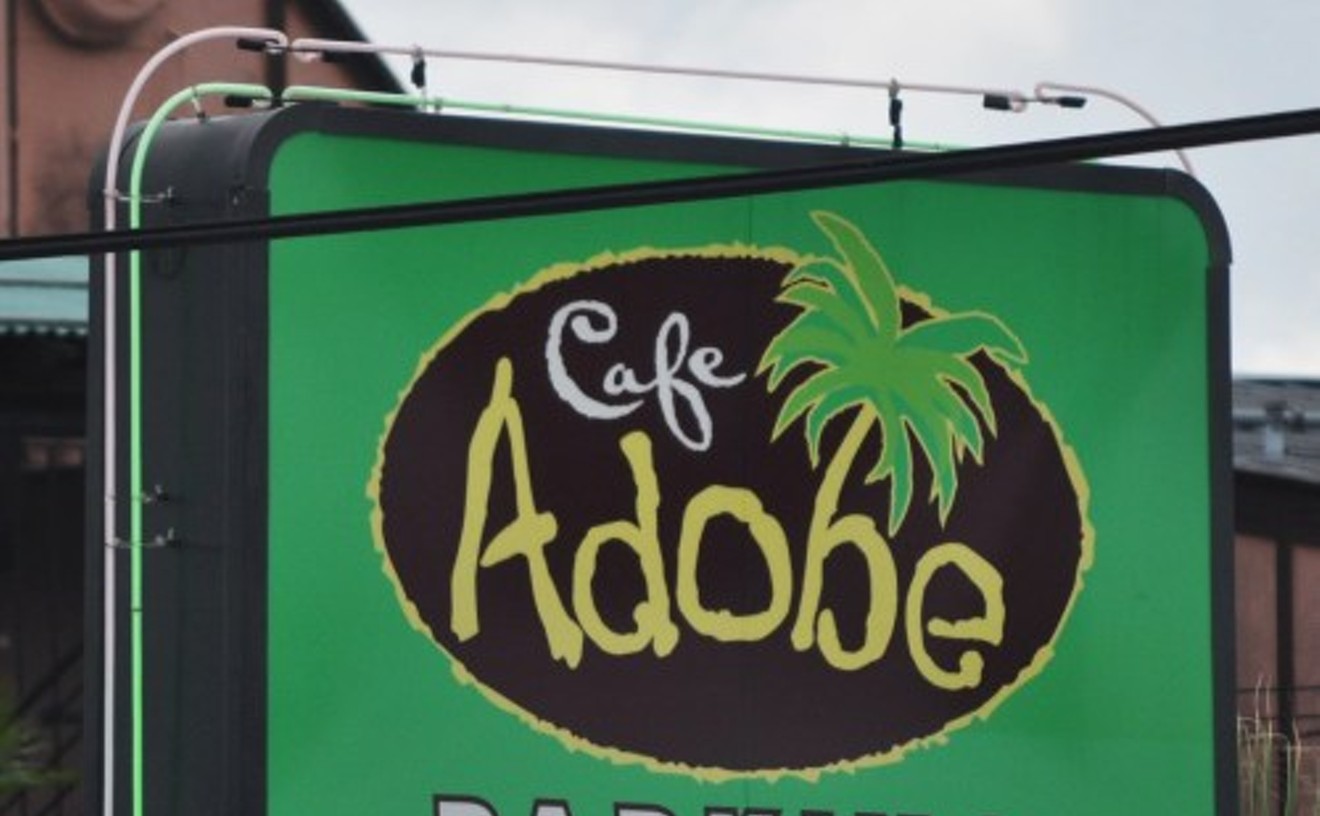 Life is complicated enough. Don't let your liquor be that way. Unhappily, Houston has hundreds of bars and restaurants trying to hook consumers with ever-evolving concoctions. By all means, let them audition. Encourage them to pour all kinds of fruity and frothy mixtures to be zapped into life by 220-volt blenders, like some Frankenstein creation. Just don't let 'em mess with the margarita. Cafe Adobe understands this basic of the beverages. Drinkers can order up unlimited arrays of specialty blends. There's even a variety of margaritalike drinks for the asking. But the establishment also appreciates -- even honors -- tradition above all. Order up the perfect margarita. Let the Herradura Plata tequila unite with Cointreau. Even the lime juice comes specially made here, and it does a grand job of marrying flavors into an ice-crowned bond. Yes. The real margarita is the essence of purity. At the Adobe, this tradition is honored. Now enjoy.

3. Driving in the heat makes you crave big cold drinks.

Which is why you should drive to Bambolino's. Without leaving your car, you can buy a semifrozen lemonade for a piddling $1.29. At 32 ounces, the large serving is sufficiently big. And it's crushed-ice-cold enough to give you an ice-cream headache. 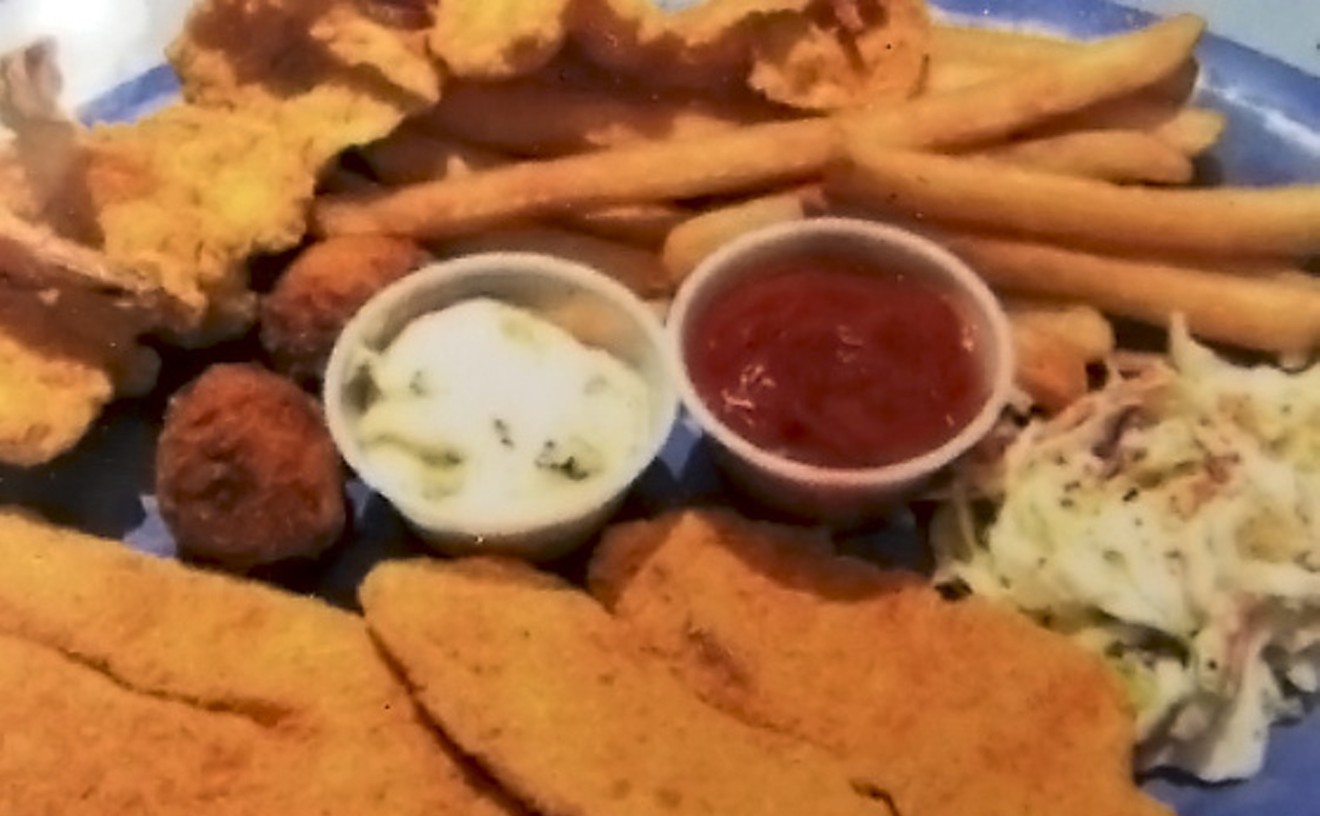 Jeff Balke
Some people refer to journalists as bottom-feeders. Well, as long as there are crustaceans like the ones served up at the Captain's around, we will consider ourselves in good company. Since the restaurant is best known for its oysters on the half shell, the cold boiled shrimp sometimes get overlooked, but not by us. Never overcooked, these large pink beauties are spiced just right, always firm and fresh, and always cold. Make your own dipping sauce with condiments that include ketchup, Worcestershire sauce, horseradish, Tabasco, lemons, salt and pepper.