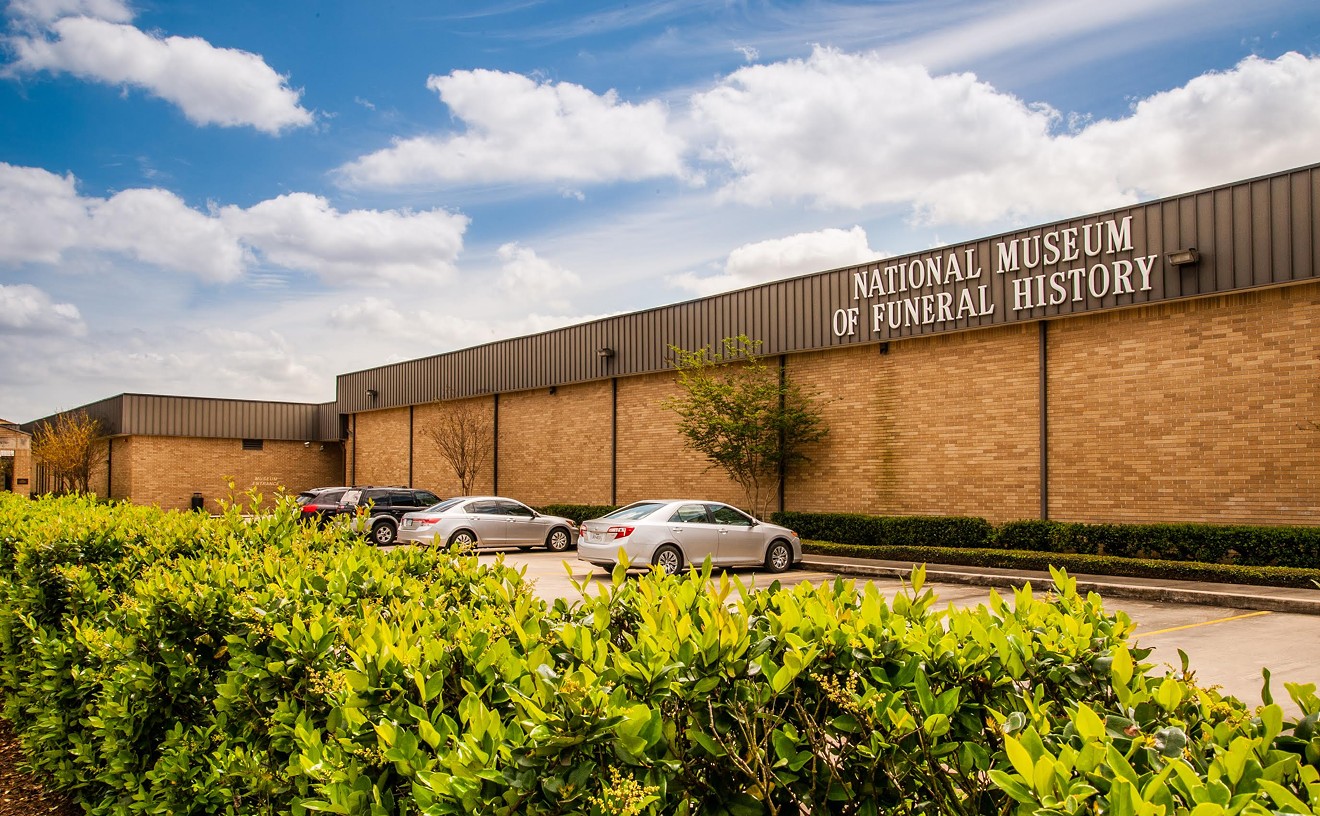 Okay, so Houston has some kick-ass museums. We've got the Menil, Contemporary Arts, Natural History, you name it. We're not hurting for good -- even great -- traditional museums. But only Houston has the NMFH, where the motto is "Any day above ground is a good one." From "fantasy coffins" to old-timey hearses, this homage to the dead-body business is rife with stuff you just aren't gonna find anywhere else. It's inexpensive, too, so why not pack the kiddos in the family truckster and spend a Saturday checking out creepy shit? Afterward, visit the gift shop, where, among other items, you can buy Undertakers Spring Water and a book of celebrity death certificates.
Readers' choice: Houston Museum of Natural Science

We define Museum District as being that area between Almeda to the east, West Alabama to the north, Rice Boulevard to the south, and Shepherd to the west, so if you think about it, there's a fair bit of competition for this sporty yet intelligent nightspot. Here's why we like it best: It's less of a meat market than the nearby Tavern; it's less cramped than T.K. Bitterman's; it has a better jukebox than the Harp; and it offers liquor, unlike the West Alabama Ice House. And it's both closer to all the major museums and a better place to watch a game than anywhere this side of PJ's on West Gray.

Burt Bacharach will forever be associated with the '60s. Tunes like "I'll Never Fall in Love Again," made famous by the velvet-voiced Dionne Warwick, defined urbane cool. They also do quite well in today's world of musical comedy, as Main Street Theater's production of Bacharach's Promises, Promises made clear. Spun by director Rob Babbitt into a lively froth, the musical, about corporate life in the '60s, featured a charming Joel Sandel as the much put-upon C.C. Baxter. There were also four stoogelike executives (is there any other kind?), played by David R. Wald, Mike Lovell, Robert Leeds and Terry Jones, who made life miserable for Baxter as he tried to get ahead in the dog-eat-dog world of corporate America. The goofy musical, about bad behavior in the high-rise world of big business, was just the sort of medicine our city of major corporations needed. 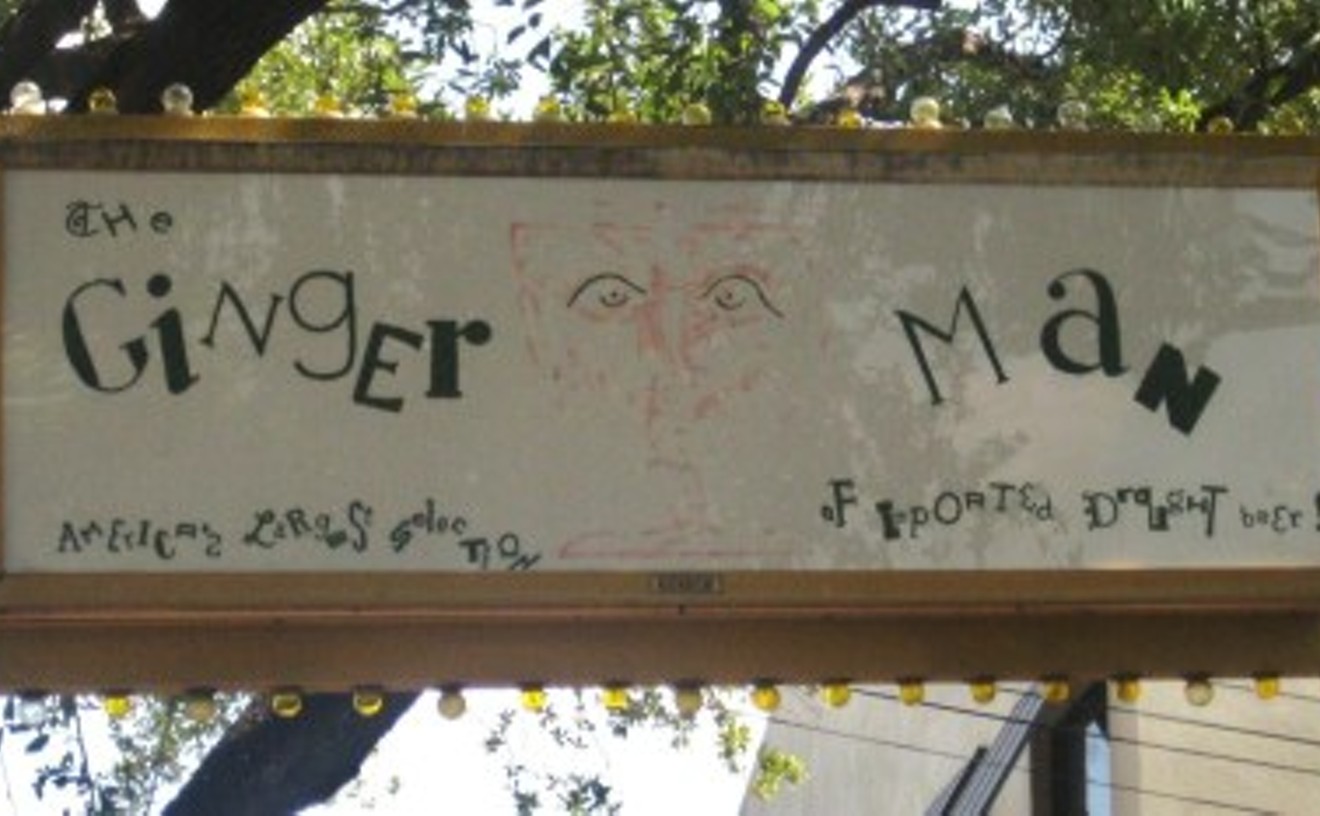 The undisputed college bar's college bar, The Ginger Man boasts a massive menu of magnificent microbrews. The CD jukebox has an eclectic selection, ranging from high-octane classic rock to London Calling. And as might be expected, conversation overheard here is as intellectually stimulating as it is slurred, but who would want it any other way?

What's wrong with classy every once in a while? This place provides a high-toned alternative to all those sports bars and trendy hipster hangouts that are so common. Elegant art on the walls, a knowledgeable bartending staff and a world-class selection of booze make Mugsy's an option for your inner social climber. So throw on your best duds, grab your best guy or gal, and head out for a highball.

Tamarie Cooper has become an institution in H-town. Every summer for the past ten years, she's treated the city to a brand-new musical episode of her ever-evolving, bust-a-gut-funny Tamalalia series, put on with the folks at Infernal Bridegroom Productions. And hip Houstonians have come to love her for it. Sadly, this year all the fun came to an end, when Cooper and her company of clowns put on the absolute last Tamalalia ever. So in tearfully fond farewell, we're giving the award for best original show to Tamalalia 10: The Greatest Hits Show. A smorgasbord of scenes from her previous shows, No. 10 reacquainted us with her love of bad '80s MTV dance moves, her obsession with bacon and her hilarious parade of embarrassingly dreadful boyfriends. While we're sad to see Cooper's series fade into the sunset at the relatively young age of ten, it's also exciting to wonder what she'll think of next.

Poison Girl's got a strangely schizo feel to it. Inside, the narrow bar and hipster/rocker clientele reminds you of a dive in Brooklyn's Williamsburg or San Francisco's Mission District. Outside, though, the whole vibe shifts Texas-ward. There are picnic tables loaded with glasses of Bock beer, pebbly dirt on the ground, lots of lush subtropical foliage...and the rear of Poison Girl -- that peaked white clapboard facade. What does it look like? You can't quite place it at first, but then it comes in a rush: Gruene Hall. Somehow, even though you're in the very heart of darkest Montrose, you feel like you're in the Texas Hill Country. That's one magic patio, folks.

Infernal Bridegroom Productions' home at the Axiom nightclub is the perfect atmosphere -- it's comfortable enough for those tentatively making a first foray into "edgy" theater, but it has a ramshackle warehouse vibe that won't make the black-clad scenesters feel out of place. The large theater in the back is big enough for the most outrageous Tamalalia production number, while the front-room stage at the bar can easily accommodate smaller plays or readings. Add to that an outside patio for smokers, free parking and cheap beer, and art becomes easy.

Thought Crimes: The Art of Subversion

This spring DiverseWorks looked less like a conventional art gallery and more like an illicit guerrilla bunker. It housed work from some of the most creative minds in culture jamming, the hit-and-run art of media intervention. The image of a baby strapped with TNT, below the words "Hamas Baby Bomb," appeared on a faux postage stamp, which artist Michael Hernandez de Luna had stuck to an envelope and mailed to himself without a glitch. Dozens of similar terrorist envelopes lined the wall. Another installation urged visitors to cut off the labels from their clothes using a pair of scissors and pin them to a world map based on their sweatshop of origin. The creepiest exhibit, Roach Zapped!, featured a cage full of live, Malagasy giant hissing cockroaches. Each roach was strapped with an RFID tag, a technology Wal-Mart is implementing to track its products (which could easily track them straight into homes). The artists, the collective Preemptive Media, asked patrons to take a roach with them and release it in a Wal-Mart, where its RFID tag would flash the company computers with messages such as "Stop the Creep!"

There was a general wailing, flailing and gnashing of teeth when Clear Channel radio pulled the plug on local rock institution KLOL. Here was the general complaint: How dare they pull the plug on my Walton and Johnson, AC/DC-Audioslave-Stevie Ray playlists and Mandatory Metallica and replace it with all that Tejano racket! We're gonna get up a petition and get Clear Channel to put it back! We'll show 'em Houston's still a rock and roll town! How wrong we were. Mega's mix of reggaeton, Latin hip-hop and dance music, rock en espanol and Hispanicized remixes of rap hits has proved a ratings winner, while KLOL's rock successor KIOL (103.7 FM) has barely made a dent in the Arbitron books. And while most Anglos may not dig Mega, it's a rare example of a radio behemoth actually catering to its listeners -- Latin youth -- by giving them music that had been popular in the underground, rather than just whatever "tested well" in their intensely flawed research and whatever the major labels wanted to ram down our throats.