We really mean what we say when we call this place hidden — it's on the side of a crumbling strip mall on an obscure side street off Willowbend Boulevard, which is never one of the first streets you think of when you think Houston nightlife. And then there are the train tracks nearby. Still, this little beer joint has two things going for it: an amazing jukebox compiled by somebody with a doctorate in honky-tonk and a concentration in Cajun/swamp-pop studies — as exemplified by its inclusion of damn near the complete works of Gary Stewart and Cookie and the Cupcakes. And it also sports one of the most amazing bar murals in town. One wall is entirely given over to a stylized study of a West Texas town dwarfed by a mountain range, with one of the peaks in full volcanic eruption. The aging biker and roughneck regulars have never met a stranger, so belly up and grab a can of Bud while it's still the American thing to do.

When it comes to music, there's seldom the chance to correctly use the word pioneer in describing an artist. However, when it comes to Mike Dean, nobody would argue the validity of those two words being used in one sentence. He's singlehandedly shaped Houston's hip-hop sound for some time, and the roster of rappers he's worked with is longer than you can imagine. He's worked with everyone from Tupac to Kanye — yes, that Tupac, and really, that Kanye. UGK, The Geto Boys, Devin the Dude and Z-Ro...no other man has had such an influence over the sounds of the Bayou City and brought so many to an international audience.

Modern and warm, chic and cozy, The Black Swan is the perfect oasis whether you're a guest at the Omni Hotel or a fashionable urbanite looking for a great night out. Just steps away from the highly praised restaurant Noe inside the hotel, marble black swans greet patrons as they enter. Inside, there's a granite bar backlit with soft blue and green, but this is more of a lounge than a true pub. Suede chairs arranged to create private nooks, wood floors and walls, flat-screen TVs and great food and drinks make this a relaxing escape. Try the curry-fried calamari or the Kobe beef hamburger, and wash them down with a lavender mojito, a white ginger cosmo or just a simple beer. Live jazz is played on Thursday evenings, and a DJ takes control weekend nights. But no matter when you go, it'll be well worth it.

The Memoirs of a ­Beautiful Boy by ­Robert Leleux

Robert Leleux's grandmother told him, "Sad lives make funny people." If that's true, Leleux must have had a very, very sad life. His book, The Memoirs of a Beautiful Boy, is a giddy, sometimes hysterical (in both the funny and the not-funny way) coming-of-age story. The young Leleux didn't know he was gay; thankfully, his mother did, hence the frequent shopping trips to Neiman Marcus (which she knowingly considered "gay school"). There are also trips to the medical center for emergency plastic surgery (breast implants that she didn't want to tell him about) and regularly scheduled hysterics. In one bit, Leleux writes: "'I'm working very hard,' I said, 'to decide whether or not you're having a nervous breakdown. Or if you've always been crazy, and I'm just now waking up to it.'" With his larger-than-life mother focused on getting a rich new husband, Leleux is left on his own to interpret the world. What he comes up with is a wonderful, touching and very funny book. 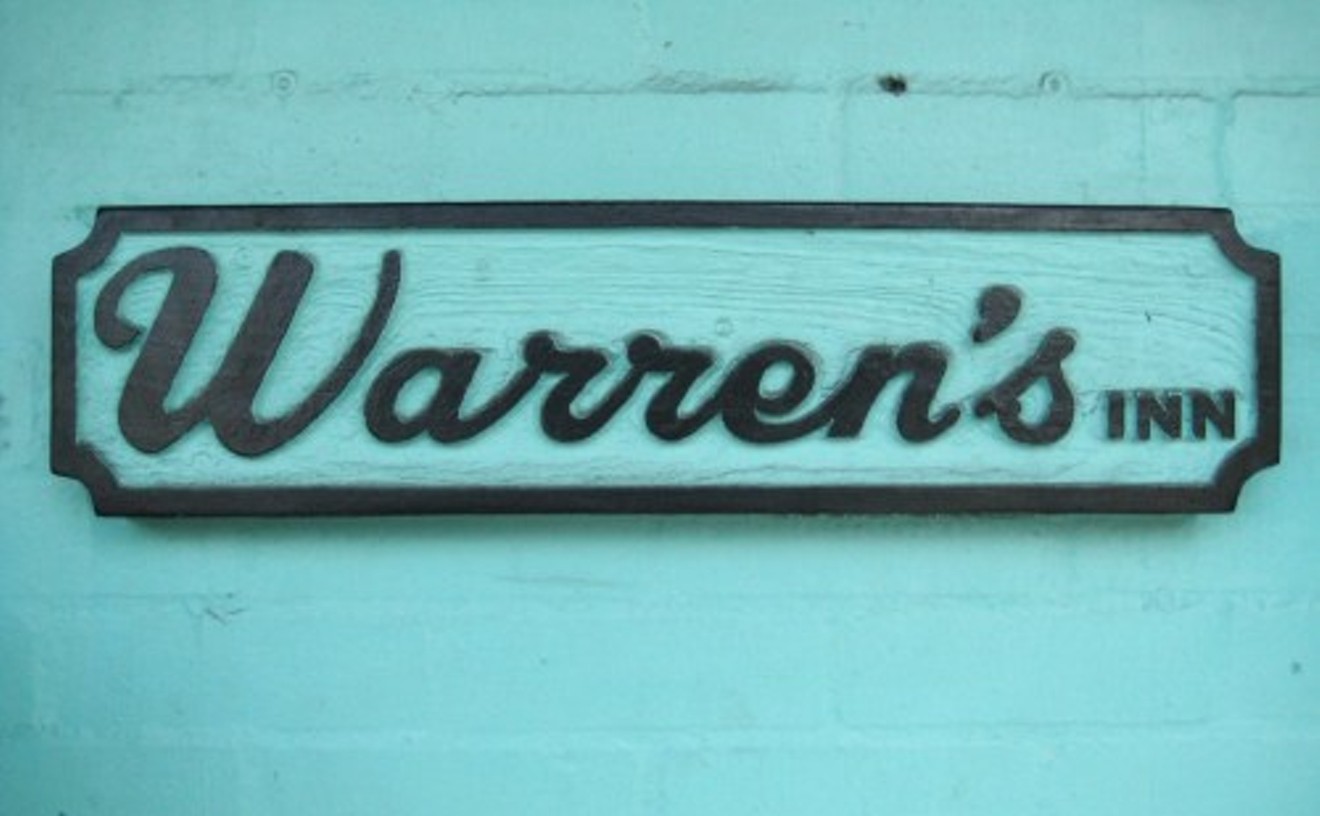 Those digital jukeboxes where a patron can download anything they want to listen to are the scourge of the Houston bar scene and a sign you should question the quality of an establishment. Imagine, letting some douche with appalling musical taste play whatever he can dream up. Nobody should ever hear Don Johnson or Shaq at a bar. Ever. Thankfully, there are places like Warren's Inn with its CD juke and great selection. It features many of Houston's finest choices, like Bobby Bland's "Two Steps From the Blues" and plenty of Lightnin' Hopkins. Miles Davis and Ella Fitzgerald sit next to Hank Williams Senior and Buckwheat Zydeco; the jukebox is like a primer on what's acceptable to play at a bar. Clearing quarters out of your pockets has never sounded so good.

Any one of Houston's major music venues has a million-dollar lighting array to beat the band. That's why we chose Meridian, because for the sprawling Chartres Street club, less is more. At June's Peter Murphy show, for instance, the most striking moments — like his a cappella cover of Nine Inch Nails' "Hurt" — came when the former Bauhaus frontman was illuminated with a single spot. For Ace Frehley, one or two colors were all that was necessary to accentuate those Detroit-rock-city riffs. (Although sometimes it was hard to see the lighting at all, what with the smoke machines working overtime.) And most of all, Meridian deserves this award for its aptly named Red Room, where the wall-to-wall scarlet hue — even more than the generally macabre or metal musical fare — never fails to remind us of Edgar Allan Poe's "The Masque of the Red Death."

Justin Doran has been so busy performing around the city this year that it's hard to pin down just one role that makes his work so outstanding. He was hilarious as a long-limbed Little League dad in Rounding Third at Stages and disturbing as the scary fantasy man of a lonely little girl's dreams in Mr. Marmalade, also at Stages. But as Senator Joseph Cantwell in Main Street Theater's production of Gore Vidal's The Best Man, Doran found fabulous new depths in a lowlife politician who wants to win at all costs. Taken as a whole, it's hard to imagine the past season without Doran. He gave Houston audiences a charming, sexy, smart and even vaguely disturbing reason to spend their hard-earned dough at the theater.

She's only just arrived in Houston, but Mikelle Johnson is already making a name for herself. The Yale graduate first starred as a disenfranchised teenager in Big Death, Little Death, Catastrophic Theatre's opening show. Then she moved on to darker subject matter in Stages's Mr. Marmalade, the cautionary tale about raising kids in America. And Johnson was brilliant as the precocious four-year-old Lucy, a child living in a dangerous imaginary world shaped by violent images from television. All elbows and knees, Johnson found the awkward grace of a child without resorting to trite silliness. Her Lucy was very much her own person, and Johnson broke our hearts as the lonely little girl with the dark imagination.

In the early morning hours of May 11, Houston lost a dear friend. Fifty-one-year-old Tom Jones, curator and spokesperson for the Art Car Museum, was basking in the glow of ­another successful Art Car Parade, chatting with friends outside the museum after the traditional Illuminated Cruise, when a drunk driver hit a parked car, which in turn hit Jones and pinned him under it. He later died at Ben Taub during surgery. Though he was intrinsic to daily operations at the Art Car ­Museum, as well as dedicated to his own pursuits as an artist and as a champion of the Art Car "lifestyle," Jones was probably best known for his trademark "Swamp Mutha," a 1982 Chevy Monte Carlo layered in ­provocative ­imagery and adorned with all ­manner of swampy ­critters. A symbol of the ­urban ­frontier, "Swamp Mutha" now ­symbolizes Jones's unique contribution to Houston's cultural ­history. A proponent of individuality to the end, one of his last statements on record, taped during a video interview before the 2008 Art Car Parade, summed up his work and hopefully his legacy. "Keep America's roads weird," he said. We'll sure try, Tom.

We're giving Sarah Tollemache top honors this year despite her recent move to New York. The comedian spent a better part of the year here and was even featured on the Houston edition of Last Comic Standing's season six. Tollemache amassed more laughs around town in less than a year than most joke-slingers would in two. Whether she's flying solo or part of an improv comedy troupe, she manages to give the audience fits. Thanks to some investigating (read: MySpace stalking), we know her family still lives in Houston, so we're guessing — and hoping — she'll drop back in sooner than later to wax hysterical about video games, sharing porno with her boyfriend and cheap prosthetic limbs. But don't be surprised if you see her before then on Letterman or Conan.