Few characters are as complicated as those built by the mighty brain of Tom Stoppard. Happily, actors as fine as Todd Waite make sure that all that complexity gets translated to the stage. The guiding force of the Alley Theatre's supercharged production of Rock 'n' Roll this past spring, Waite played Jan, a Czech lover of music. As Jan, he created a character who was both intellectually powerful and emotionally tender, a man who wanted to avoid politics even as he stood up for what he believed was right. Best of all, he made us fall in love with Stoppard all over again.

Luisa Amaral-Smith as Bessie Berger in Awake and Sing! at Main Street Theater

The kvetching character at the center of Clifford Odets's Awake and Sing! is no walk in the park for any actress — she's mean, destructive, even cruel. But Luisa Amaral-Smith managed to find the soul of Bessie Berger, the iron-fisted matriarch of the Jewish family Odets created. Bessie is the most terrible of mothers, crushing her family members even as she sets about trying to make them successful. She is, in short, the sort of mother who keeps therapists in business. But Amaral-Smith lifted Bessie out of the ick of caricature to create a fully realized woman — both deeply troubled and amazingly real, she was the embodiment of what acting is all about.

No one is more dedicated to the maxim "less is more" than Gallery Sonja Roesch. Focused on reductive and concept-based art, the gallery breaks with the pop culture norm and instead shows work by artists who rebel against visual overload. Case in point is German painter Mario Reis, a frequent guest at the gallery. Reis is well known for his "river paintings" (canvases he submerges in river beds around the world, allowing the minerals in the water to stain an image on the surface). Reis makes almost no attempt to control his images, and once they're done, he resists embellishments and manipulation. Keeping his actions as an artist to a minimum, Reis nonetheless produces evocative works. In a scene filled with noisy, complicated art, Gallery Sonja Roesch is a respite showing uncluttered works that resonate with viewers. 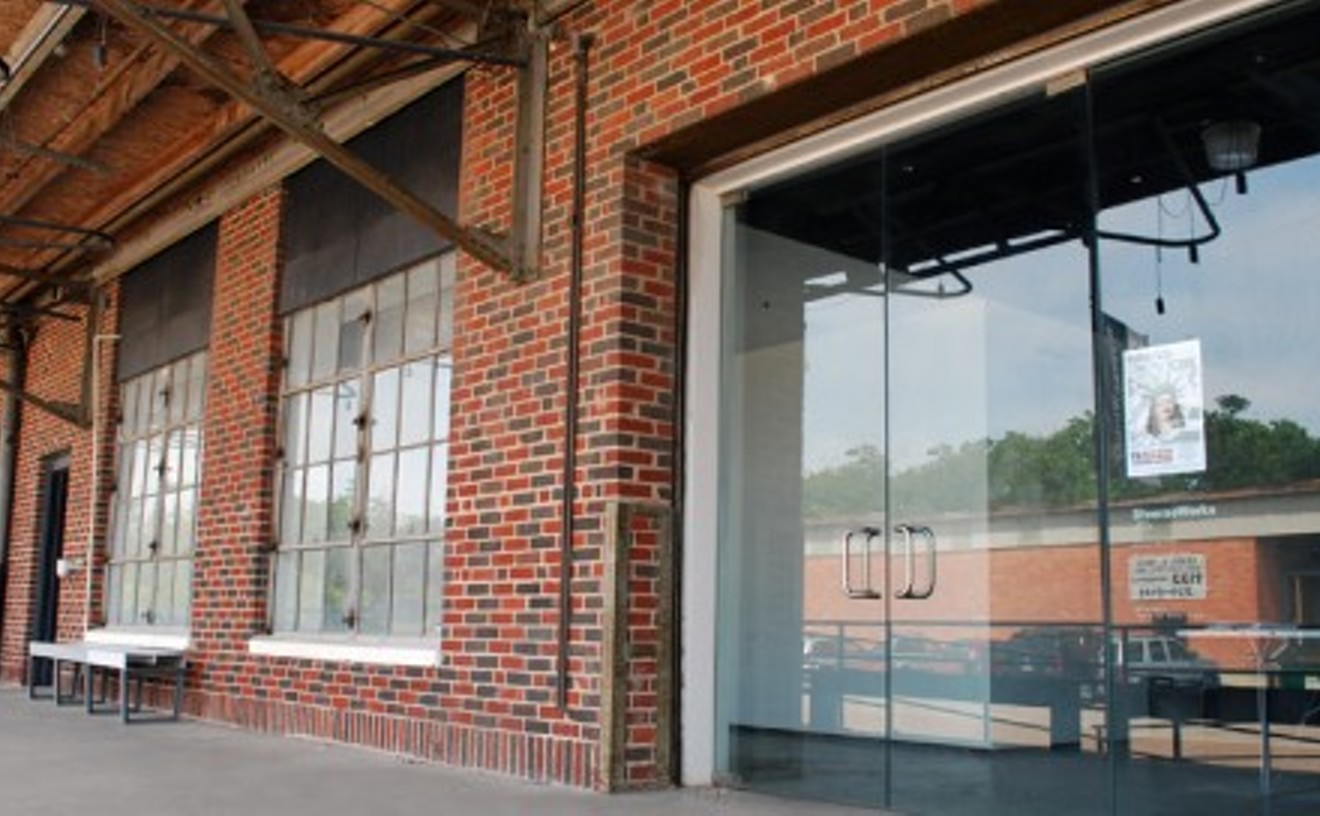 Ben Tecumseh DeSoto and Ann Walton Sieber's photography exhibit "Understanding Poverty" at DiverseWorks was harrowing for its unflinching look at Houston's homeless. The show chronicled, from the late '80s to today, the story of Judy Pruitt, a.k.a. "Snow," an abandoned street kid begging, tricking and stealing to survive, as well as that of Ben White, a homeless man DeSoto and Sieber followed. The photos delved into the traumatized psychology of poverty and revealed hard truths about the broken-down system that perpetuates it. "DeSoto, who was a staff photographer at the Houston Chronicle for 25 years, has employed a photojournalist technique, and his imagery is augmented by Sieber's large chunks of text and quotes from literature. There were disturbing images of crack and heroin use, domestic abuse and life on the street. One section of photos addressed city programs and initiatives to document and help those in need. While DeSoto and Sieber's subject matter was hard to crack at first, once one connected with it, it became absorbing and rewarding. It was an ugly world, but one worth getting lost in.

Painter/sculptor Patrick Medrano and photographer Katy Anderson were two of the winners of last January's Mastermind Awards, and we just thought they deserved another win. The married couple conceptualized the Fodice Foundation, an artist residency compound housed in an abandoned WPA school in the East Texas town of Fodice. To hear the two talk about the project, one imagines established sites like Donald Judd's Chinati Foundation in Marfa or Robert Wilson's Watermill Center on Long Island, but obviously more intimate and homey — a place more about ideas, location and history than art-world clout. Each year, the foundation will offer up to six artists concurrent residencies for up to two months, for an estimated total of 24 artists per year. The visiting artists will have the opportunity to focus on their own work, and they will also become integral parts of a very depressed community where the arts are currently neglected. In addition to six artist studios, the Fodice compound will include housing, a fully equipped workshop, kitchen facilities, offices, a gallery space and a performance space, as well as permanent installations. We can't wait to make the road trip and check out this naturally collaborative team's ultimate collaboration.

This Houston gypsy-punk outfit sounds just like a southern-fried Gogol Bordello, but without all that pungent Eastern Bloc business. The band's name stands in stark contrast to its jammy and quaintly morose neo-folk, leading you to believe it would be a gang of blood-swilling metalheads on crank. There are no crazy stories behind their moniker, and as Mike Mejia clarified to us, "To tell you the honest truth, we thought of it and couldn't find any one person who thought it would be a good idea to name a band like ours Come See My Dead Person." Can't say we aren't miffed that there was no actual dead person to take a gander at.

With a revolving lineup of local noise luminaries like Rusted Shut's Don Walsh and a healthy dose of leather, the ear-melting Homopolice have been the best and weirdest show for the money this past year. Any appearance by bassist Beau Beasley's brainchild brings out a curious cast of voyeurs and sickos waiting to watch the band bludgeon themselves or each other. During the band's set at Mango's during this spring's Westheimer Block Party, singer Josh made quick work of a cheap guitar and his face, leaving a mess of blood on the floor and the axe in splinters all over the venue.

Sometimes a music scene doesn't even know it's been missing a band until that band shows up. That was the case back in January, when Roky Moon & BOLT appeared fully formed one chilly evening at Walter's on Washington. Within about five minutes of going onstage, Moon and friends — cobbled together from American Sharks, Black Black Gold and a couple of other local bands in various stages of activity – made us realize how much Houston needed a vintage glam-rock band that sounded like they just fell to Earth à la David Bowie/Ziggy Stardust and his Spiders from Mars. BOLT only played a few songs, but immediately afterward people began arguing whether the band's Houston-size hooks were closer to T. Rex or the New York Dolls. We stick with what we said back then: For local glam fans, BOLT is a moonage daydream come true.

It gets frustrating, growing to love a local band and then watching it move on to greener pastures. In Houston, as we all know, that happens to more bands than it doesn't (though, thankfully, somewhat less so lately). At least indie-twang duo Papermoons had a better reason for decamping for Austin and Ohio than simply wanting to be in a better scene; namely, a family illness and longtime girlfriend. Had they stuck around, Papermoons would have been one of the leading lights of Houston's new-school Americana scene (Buxton, News on the March, Grandfather Child), and the gorgeously sad songs of 2008 LP New Tales might have even landed them an opening spot for Ryan Adams & the Cardinals on their next trip through town. But unlike some of Houston's other musical expatriates, Papermoons bear the Bayou City no ill will, and return often enough that it almost seems like they're still a local band. "We aren't good friends with any bands here in town, and we hardly ever play in Austin," says Papermoons' Daniel Hawkins. "It'll take a while for us to get anywhere close to what we have in Houston. Houston will always be where we feel that we are from." 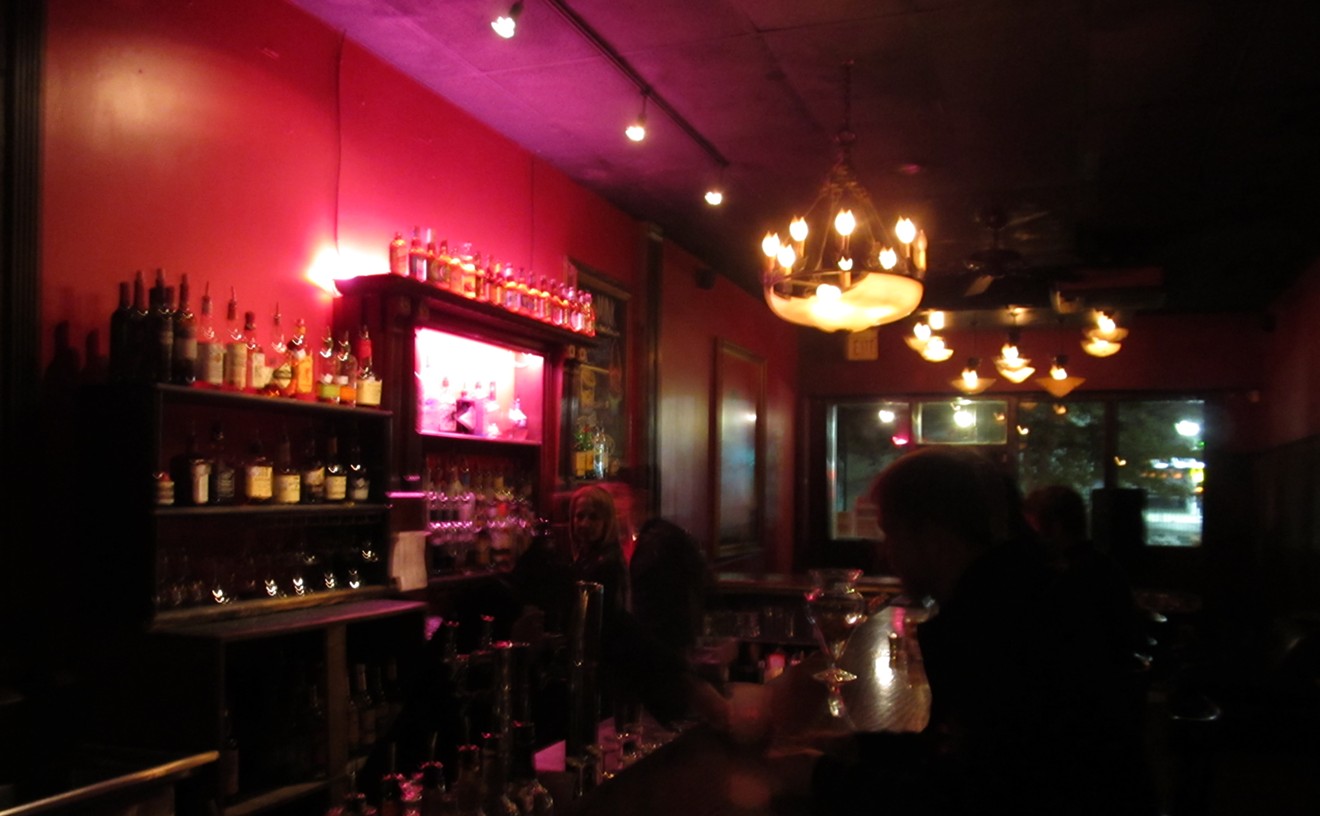 While a never-ending parade of Houston's best indie-rockers, punks and DJs, plus out-of-town acts of all shapes and sizes (many on their first-ever tour, or playing Houston for the first time), shuffle through The Mink's aptly-named adjacent Backroom, up front is one of the city's coziest, least assuming saloons. The dim lights and comfy seating (especially the couches up front) make The Mink an ideal date spot; we suspect many a spark has been kindled over a $10 bottle of wine on Tuesday nights. The drinks are cheap and plentiful, and the friendly bartenders keep the atmosphere buzzing with a bottomless iTunes playlist that breezes from AC/DC to Arcade Fire to Merle Haggard. (Also on Tuesdays, the preponderance of vintage country music makes The Mink the Inner Loop's unlikeliest honky-tonk.) Whether you're just killing time between bands out back or bellied up for a quiet evening of Lone Star and conversation, The Mink won't steer you wrong.