There are dozens of ways to measure a police officer's performance. How many cases closed, how many tickets written — or, as in the case of our winner for Best Cop, Houston Police Officer Julia Christina Oliver, the more intangible quality of personal courage. Oliver has been with HPD for more than 25 years, serving 23 of them as a male officer. After quietly starting hormone therapy as part of male-to-female gender reassignment, Oliver was thrust into the national spotlight when her situation became public. HPD brass were uniformly supportive, but her fellow officers and the public had more varied reactions, from uninterested to overtly hostile. Oliver, however, remained professional, dedicated to protecting the citizens of Houston and even managing to keep her sense of humor intact.

Freedom for the Crawford protesters

The Texas Court of Criminal Appeals — the Supreme Court for criminal cases in the state — is not exactly made up of flaming liberals, as anyone who's tried to get a conviction overturned has learned. You wouldn't think the judges would take kindly to a bunch of out-of-state hippie longhairs coming down to the peaceful Texas burg of Crawford in order to prevent their pal George W. Bush from enjoying the clearing of brush via the fascist/socialist method of freedom of speech. Not to mention these impolite scum were protesting what is probably the most God-fearing, Bible-thumping war since the Crusades. So it came as a bit of a surprise — and a pleasant one at that — when a 5-4 majority of the court threw out the convictions of two protestors. The Texas ACLU called it a "monumental victory for the First Amendment." It was a shocker, to be sure. Maybe there's hope for the TCCA yet.

As of this writing, Stanford hasn't been convicted of any crime, but he's been charged with a whopper: namely, presiding over an $8 billion Ponzi scheme, making him Houston's own Bernie Madoff. The eccentric Stanford didn't spend much time in Houston, preferring the empire he built for himself in the Caribbean island-nation of Antigua, where he was cozy with the government. But when the feds raided The Stanford Group's office on Westheimer, Sir Allen was nowhere to be found. He surfaced a few days later in Virginia, claiming to be unaware that he was the target of a nationwide federal manhunt. We don't know how things will turn out — Stanford has pleaded not guilty, and maybe this just boils down to a misunderstanding. A big, fat, gigantic, multibillion-dollar misunderstanding. We're just glad we had all our money in Franklin Mint Elvis Presley dinner plates; fewer things in this world are as reliable.

Brian Wice is a shrinking wallflower who all but refuses to blow his own horn. It can sometimes take up to 2.6 seconds for him to leap at yet another opportunity to expound on the law before a camera, whether it's his regular gig at Channel 2 or any network that needs instant analysis. He's the Sound-Bite King. But anyone who laughs at his self-promotion forgets one key thing: The guy's a damn fine lawyer. Just in the past year or so, he's impressively won appeals for Susan Wright, the husband-killer whose trial included one prosecutor tying another to a bed and pretending to stab him 200 times; he's gotten Galveston County's only Death Row inmate a reprieve; and he forced the lifting of a gag order that resulted in the quick settlement of the Ashley Benton teen-gang murder case. His practice is strictly on the appellate level, so you have to get yourself convicted of a heinous crime first, but if you think your trial lawyer or the judge screwed up, Wice is the guy you need to turn to.

Longtime Republican control of basically all countywide offices resulted in a lot of stagnation, good-ol'-boy indifference and a resistance to change. (Note: This would have happened under longtime Democratic control, too.) Nowhere was it worse than in the Harris County Sheriff's Office, a place entirely distrusted by many minority residents. Harassment by officers, a jail where inmates tended to die under mysterious circumstances and a leadership that reacted über-defensively to the slightest criticism had left the department in rough shape. Former city councilman (and former Houston cop) Adrian Garcia took over the office in January and has been a breath of fresh air. When sheriff's deputies were accused of harassing a Sikh family, he went to a Sikh temple to talk about it. He's still in the phase where he can blame problems on predecessors — we'll see how he reacts to criticism when it's clearly aimed at him — but Garcia has made an impressive start in a department that sorely needed it.

Sadly, the Best Firefighter title is bestowed posthumously on Houston firefighters James Harlow and Damien Hobbs. The two men died while fighting a blaze last April. Harlow, a 30-year veteran of the department, had been captain of Fire Station 26 for three years. Hobbs, an Iraq war veteran, had begun active duty with the fire department less than 30 days before his death. The veteran and the rookie, tied together by tragedy, represent the commitment of every HFD firefighter — to save others, no matter what the cost.

Spokespeople can be a reporter's best friend or worst nightmare, and Michelle Lyons is the poster child for the former. Don't get us wrong — "best friend" doesn't mean she's always available to hang out and talk about the Astros; it means she's always able to provide useful, reliable information, whether it be a quote, a statistic, a reference, or anything else that will help reporters get to the truth and heart of a story. Some flacks live to circle the wagons and block the free flow of public information. They live to throw back their heads, cackle maniacally and bust out the red tape. But Lyons works her ass off to make sure that if a reporter's going to write something about an institution as massive and complex as TDCJ, that reporter's going to have the correct information, and they're going to have it ASAP. She's fast, patient, whip-smart and doesn't make you feel like an idiot for asking possibly stupid questions (not that we ever do that). She gets the job done.

Back when it was laid out in 1954, Glenbrook Valley was a showpiece suburb, a mod vision of the glorious George Jetson age to come. Better Homes and Gardens even touted one of the six original Glenbrook ranchers as "the model home for all America." Unfortunately for those who bought in, Houston's march continued aggressively to the west, leaving affluent east side outposts like Hobby-area Glenbrook to wither in obscurity for decades. But now, with affordable homes on the West Side hard to find this side of Dairy Ashford, hip, young-ish Houstonians are starting to look east. And Glenbrook has a lot to offer — it reminds us of a much more stylish Sharpstown, with houses that would do a Mad Men character proud set on lots practically the size of small farms. 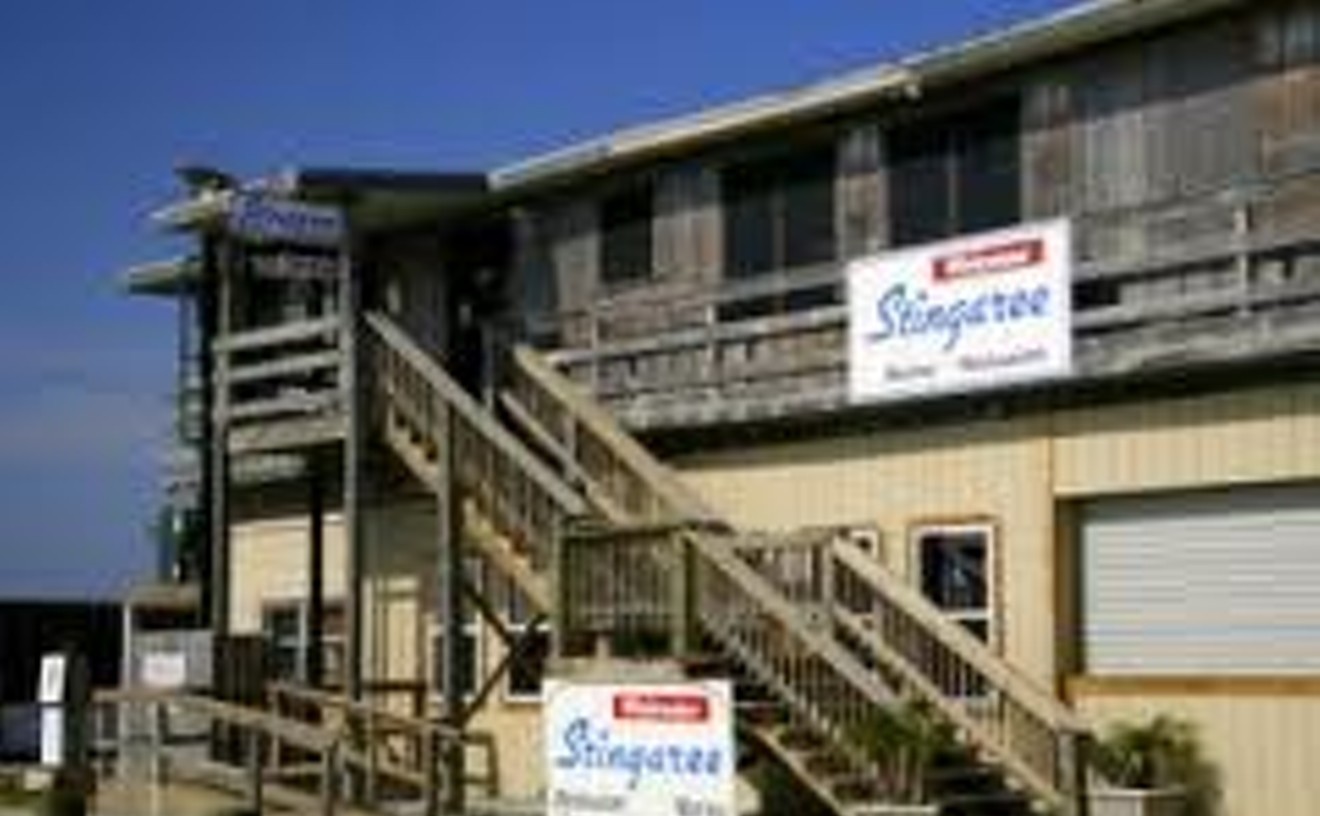 Other businesses on the Ike-annihilated (or is it "an-Ike-hilated"?) Bolivar Peninsula reopened sooner than the Stingaree, but none was more symbolically important. The Stingaree is the Peninsula's social and culinary epicenter, where Bolivar in all its blue-collar glory gathered on the deck to watch the maritime traffic slide past in the Intracoastal Waterway, down Stingaritas and gorge on oysters jubilee (the restaurant's signature dish — basically, 30 bivalves prepared each and every way possible). It took five months, but when the Stingaree reopened in February, it was the clearest statement yet that battered Bolivar would be back.

Lose an Eye, It's a Sport (Cory Crow)

Accountant Cory Crow spun off Lose an Eye from earlier blog Isolation Desolation in 2006, and we're glad. For three years now, Lose an Eye has been — dare we say it? — an entertaining and educational brew of Space City politics and culture, with sharp writing, links to a wide variety of media, and one of our favorites, The Houston Political Dictionary. Here are two "R" entries: "Renewal, urban: an idea pushed by primarily wealthy, primarily Caucasian political leaders living just outside of the urban core to entice people to forget why it is they wanted so desperately to move out of said area to begin with"; "Revitalize: The urban renewal equivalent of dressing up the body for a funeral." Like we said, the dude's good. [Note: Sadly, the eye has been lost for good: Crow announced on September 15 that he's done with the blog.]