Lose an Eye, It's a Sport (Cory Crow)

Accountant Cory Crow spun off Lose an Eye from earlier blog Isolation Desolation in 2006, and we're glad. For three years now, Lose an Eye has been — dare we say it? — an entertaining and educational brew of Space City politics and culture, with sharp writing, links to a wide variety of media, and one of our favorites, The Houston Political Dictionary. Here are two "R" entries: "Renewal, urban: an idea pushed by primarily wealthy, primarily Caucasian political leaders living just outside of the urban core to entice people to forget why it is they wanted so desperately to move out of said area to begin with"; "Revitalize: The urban renewal equivalent of dressing up the body for a funeral." Like we said, the dude's good. [Note: Sadly, the eye has been lost for good: Crow announced on September 15 that he's done with the blog.]

We keep waiting for a local magazine to stand up and snatch this prize away from OutSmart, but it just never happens. Even as the masthead changes from time to time, the quality remains high: smart, insightful features into Houston's gay past and present, sharp reviews of theater, music and gay-targeted movies, and lively interviews with national figures letting out their "Did they just say that?" side. And it's free. It's a hard combination to beat, but maybe some year someone will.

You may not agree with him, but chances are very good that the guy next to you in traffic is emphatically nodding his head to every word that 740 AM radio host Michael Berry utters. Hell, we only agree with his keen conservative stances but once in a blue moon, but we keep listening for sheer entertainment. When Berry drops his voice down in that quasi-­affected Texas drawl to make his point clear, you get a stiff reminder that not everyone is a part of the Obama Nation.

Until fairly recently, news anchors in the Houston market tended to stay in their jobs until full fossilization had set in. Nowadays they seem to change faces quicker than a channel-surfing dude switches channels. Which means Gina Gaston, who was once an utter newcomer, is now a reassuring longtime presence. She's paired with the ultimate anchor survivor, Dave Ward, and neatly balances his tendency toward Ted Baxter-ism with a welcoming warmth. Gaston knows the town well and conveys a professional, smooth presence on the air, even as she sometimes has to deal with the more outrageous ratings-bait that editors come up with. Here's hoping she never gets caught up in the change-anchors-every-month trend.

We're not experts, but we're pretty sure it's a sign of great marketing that, if you mention "scrap metal" to a Houstonite, that person will immediately think of $2 bills. Why? Because for thousands of years now, we've been exposed to the spastic owner of C&D Scrap Metal — or his kids, who seem to be pretty good sports — telling us, "We'll even pay you in two-dollar bills!" By now, after eons of conditioning, such an incentive makes perfect sense. But if you stop and think about it, there is absolutely no good reason for anyone to be excited about being paid in discontinued currency. Yet, the whole gimmick totally distinguishes C&D. If you watch enough of these ads, you might start expecting every other business to give you change in $2 bills, or hell, Susan B. Anthonys. Truly revolutionary stuff.

You'd think, with the way Channel 13's news broadcasts tend to consistently have solid ratings, that the operation would get talked about more than it does. Channel 11 tends to get kudos for being a serious, relatively sober newscast, Channel 2 gets buzz with wild antics, and Fox and 39...don't generally get watched at all. But 13 gets its ratings because it has become comfort food to Houstonians, in a good way. Even as anchors change (although timeless Dave Ward stays on board), we keep watching because we know we'll get a wild Wayne Dolcefino investigation, good weather information and some of the most experienced street reporters in town. The glory days of Marvin Zindler and "Sliiiime in the ice machine!!" are but a rosy memory, but 13 still keeps pumping out a broadcast that deserves the viewers it gets.

Phil Archer has become an institution in local news, a guy who's seemingly been around forever but hasn't lost the urge to chase down the latest story and do a great job with it. He can take complex governmental issues and make them clear enough for the average Joe to understand; he can stand in floodwaters with the best of them; he can ask the tough questions a defensive bureaucrat is trying to dodge. Story too good to check out: Local urban legend says that he has a lifetime contract with KPRC after getting shot in the butt in the long-ago Moody Park Riots. In these shaky financial times, we're sure he's damn glad for that bullet, if true.

The only time a Houston weathercaster can truly earn his or her stripes is during hurricane season. A trained monkey could give you the forecast eight months a year. After all, how hard is it to say, "It's gonna be hot and humid and it might rain" over and over again? No, it's only when we get hit or menaced by a big blow that the wheat gets separated from the chaff, and Billingsley proved his mettle again last year during Hurricane Ike, much as he did in 2005 during Rita. While many of the other weathercasters milked the fear and paranoia of both storms for all the doomsday scenarios they were worth, Billingsley remained calm throughout. During Ike, he stayed most focused on Galveston and the coast, where the danger was greatest and where he owns a home. Nobody knew better than Billingsley that as real as the suffering was in Houston, things were much worse on the barrier islands and along the rims of the bays. As Houston Chronicle blogger Eric "SciGuy" Berger put it, Billingsley is the local weathercaster who demonstrates best how to inform rather than scare, and a hurricane-weary region loves him for it.

Though ostensibly a site devoted to local architecture, it's on the message boards that "the Haif" comes alive. A full range of topics generally (but not exclusively) related to Houston and its building trade are brought to the fore — on a recent day, the hot topics included developments at Memorial City Mall and what to do when you get hit by a drunk driver. What's more, a huge smorgasbord of events, remembrances and causes is discussed, occasionally at length and argumentatively. (But never vitriolically, as the Haif is one of the more rigorously policed boards we've hung around on.) Other sites cover much of the same ground with more style and economy (Swamplot, we tip our hat in your direction), but the Haif's heft carries the day with sheer size and variety. 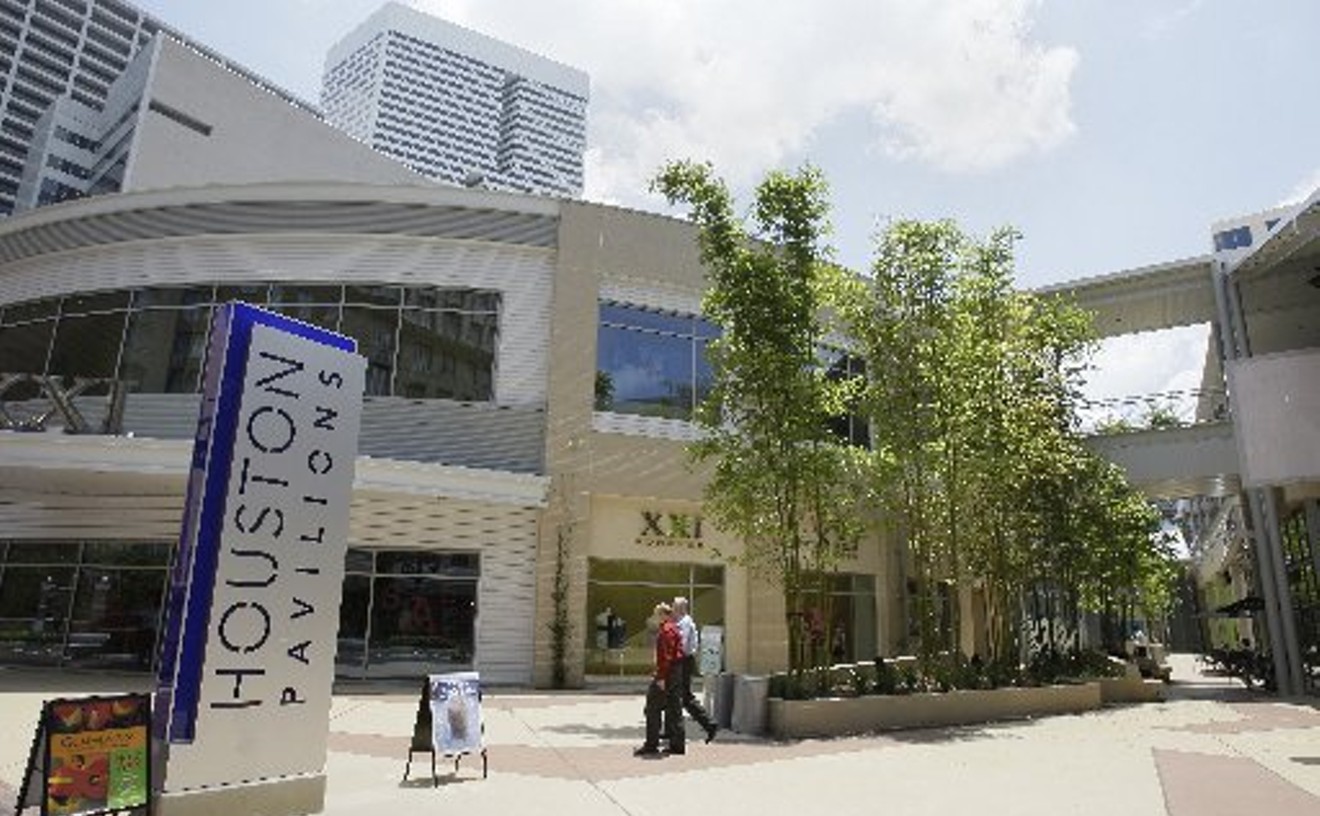 Despite assurances from booster types that Houston was insulated from the worst effects of the global economic meltdown, the past year was notably slow on the development front, which is why, despite its faults and thus-far unfulfilled promise, Houston Pavilions takes this award in a walk. While we would have preferred that the shops, restaurants and taverns in this downtown arcade-like setting faced the street instead of plunging inward, it sure is nice to have a full-service bookstore downtown. (Even if it's a Books-A-Million and not Borders or Barnes & Noble.) We also like the way the eastern edge of HP ends with the local House of Blues and a gateway to previous Best New Development winner Discovery Green. It's hard to believe, but even two or three years ago, there were times of day (especially on weekends) when there was virtually nowhere to go downtown, and now you can pick up a copy of The Corrections and a new dress, then top it all off with an enchilada dinner in one fell swoop. And coming soon are a fancy-pants bowling alley, two ice cream parlors, several pubs, a Yao's Chinese restaurant, a tapas bar and a steakhouse.