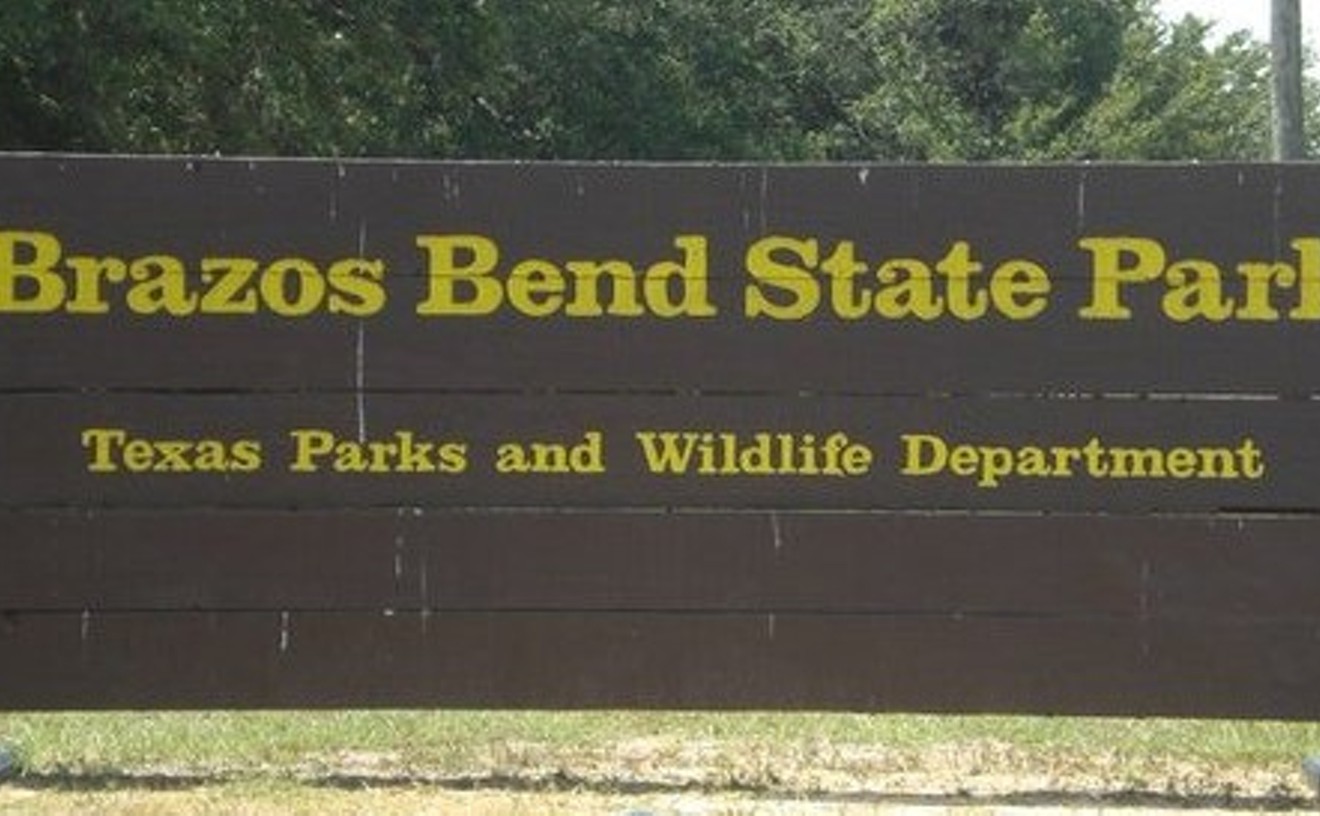 It takes about an hour to drive from downtown to Brazos Bend State Park, but the trip is well worth it, because the park is a great way to burn an afternoon. In fact, you could probably burn an entire week hiking through the park's 24 miles of trails. A good route is the one-mile-long Pilant Slough Trail, which starts just off the main parking lot and ends at an observation tower, offering a gorgeous view from the top. Along the way, especially from the banks of Elm Lake, you're sure to see plenty of alligators swimming and sunning on shore. This place isn't the zoo, and an alligator could theoretically eat you or your dog, so the park offers plenty of tips for alligator etiquette, including, "Absolutely do not feed or annoy the alligators." 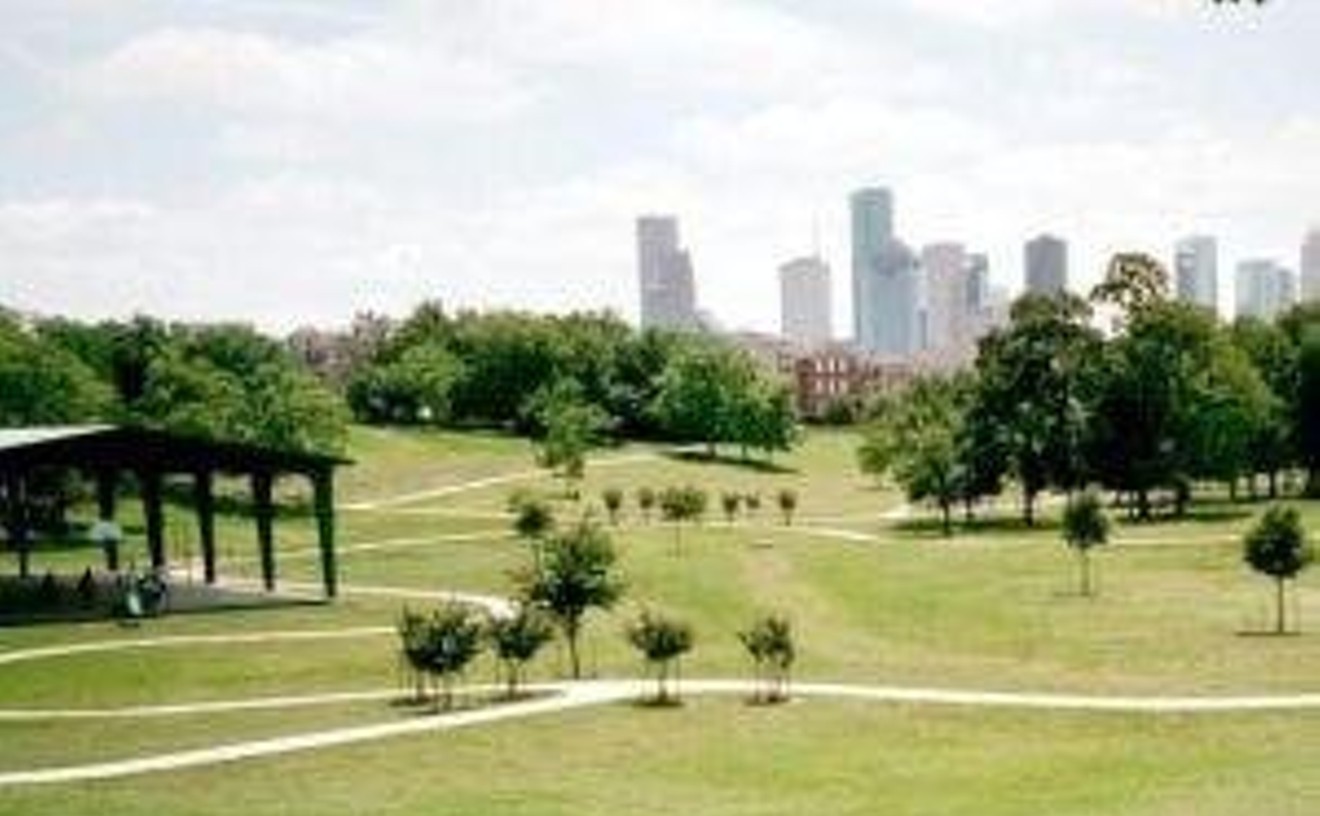 Wedged between the boarded-up YWCA and Allen Parkway, Spotts Park has the winding sidewalks and leafy trees a good dog walk requires. But the real treat is the freedom to play some good, old-fashioned fetch. Beyond the sidewalks and picnic tables is an expanse of green that's rarely populated aside from the occasional sunbathers and game of ultimate Frisbee, and even then there's usually more than enough room to throw the ball or stick. It seems too good to be true, but we've never seen any lawmen spoil the fun. Just make sure your pooch doesn't end up snagging someone's Frisbee.

How do we know this place is for real? For one, the doors will open at 6 a.m. when necessary for the local fanatics to catch Arsenal and Man U live on the giant projection screen. (Worry not, latecomers: There are enough smaller TVs scattered around to provide every seat with a view.) And the edge of the manly bar is weathered enough to suggest many a pair of elbows propped up for hours on end during hard-fought wins, heartbreaking losses and wimpy European ties. The massive pub can be found from afar by following the British flag set at full mast above the sprawl of Richmond Avenue. There's a substantial array of worldly beers on tap — from Hefeweizen and Old Speckled Hen to Anchor Steam to Fuller's Porter — and enough old-country accents to make one wary of calling it "soccer." Full English breakfasts are served on weekends, and the menu also features the bangers and mash, fish and chips, hearty meat pies and roasts of the day to build up a full English belly.

Ever since Michael Lewis branded Shane Battier "the No-Stats All-Star" in The New York Times Magazine, the six-foot-eight forward has been one of those guys who is so often called underrated that he might be just a tad overrated. And it's true. After all, even after both Yao Ming and Tracy McGrady went down with injuries, Battier couldn't take the Rockets to the NBA championship, now could he? We kid, of course. In fact, we imagine that if the script had been flipped and it had been Battier sidelined instead of Yao and T-Mac, the Rockets might have gone down in the first round instead of the second. Lewis argued that Battier's mastery of things that don't show up in box scores — drawing charges, playing pesky, relentless defense, and improving the efficiency of his team's rebounding and offense in ways too subtle for all but the most astute to detect — have led to overall team improvement at every stop in Battier's journeyman career. Rockets General Manager Daryl Morey — among the first to fully value Battier's hidden talent — calls him "Lego." "When he's on the court, all the pieces start to fit together," Morey told the Times magazine. "And everything that leads to winning that you can get to through intellect instead of innate ability, Shane excels in. I'll bet he's in the hundredth percentile of every category."

Southside means different things to most parents and kids. Parents may see it as "the place where emergency room bills and hassles come from," and young skaters see it as "heaven." For years now, the venerable indoor skatepark has been servicing the board lust of skate kids in the Houston and Pasadena area. Saturdays and Sundays get pretty hectic, with skate clinics and weekend warriors making their way to Southside, so stake out a spot early near one of the park's sets and hunker down. Thursdays are epic days for skaters older than 25, when the park hosts its "O.G. Rippers Discount Day." Just don't tell the folks at the office how you broke your arm.

This has not been a banner year for Houston's top pro sports teams. The Dynamo failed to win the MLS Championship for the first time in the team's history; neither the Texans nor the Astros made the playoffs (though at least the Texans appear headed in the right direction); and the Houston Comets topped them all in ignominy by vanishing from the face of the Earth. Which leaves us with the Rockets, who limped into the postseason minus one of their superstars and yet still managed to do something the Rockets haven't done since 1997: They won a playoff series, easily dispatching the Portland Trail Blazers four games to two, despite the loss of backup center Dikembe Mutombo. And while we aren't ones to hang our hats on moral victories, the Rockets did us all proud in the ensuing series against the L.A. Lakers. Yao Ming, the Rockets' last superstar, went down early in the series with another stress fracture in his foot, and yet the scrappy Rockets extended the eventual NBA champions out to a full seven games. Not bad for a bunch of no-names.

When we gave John Granato and Lance Zierlein this award last year, their show had only just started. Hell, their station had only just started. Fed up with the corporate stranglehold at KILT 610, Granato convinced investors to start up an independent sports-talk station in a market already crowded with sports-talk stations, and he convinced Zierlein to come along. Many predicted a quick demise, but these guys have only gotten better. Zierlein is a whiz when it comes to analyzing the NFL (his dad coaches in the league), and he and Granato are just plain hilarious at times. Perhaps the best bits: The "Pravda" commentator, who declares the magnificence of the Houston Texans — a salute to the hosts at 610 who pretend to criticize the team whose games they broadcast.

Charlie Pallilo, 790 AM The Sports Animal

We sometimes get some grief for our sports-radio picks: Our Best Show is one that features a lot of raucous humor; our Best Host leans more toward stat-heavy analysis. But Charlie Pallilo offers real insight along with his seeming ability to come up with every ERA since 1935 at the drop of a hat. He utterly respects the callers, and never insults the intelligence of his audience. In the land of sports-talk radio, where some hosts seem to think their job is to out-macho everybody, that's a welcome relief. Pallilo is also known for his ability to eat prodigious amounts of food without adding to his wiry frame, but we won't hold that against him.

Eric Winston is the right tackle for your Houston Texans, which normally means you don't hear a lot about him. But the dude is funny, insightful and outspoken, so he has become a hit on sports-talk stations in town and on the Net. He tweets ("Do you think Best Buy puts something in the a/c vents that makes you buy something when you go there whether you need it or not?"), he blogs (a lucid analysis of whether the NFL should have a pay scale for rookies) and, best of all, he's dependable on the field. Even in the under-the-radar world of offensive linemen, right tackles are at the bottom of the pole (left tackle is the glamour spot), so you won't see his name in too many stories or highlight films. But if he's talking or writing, it's worth checking out. 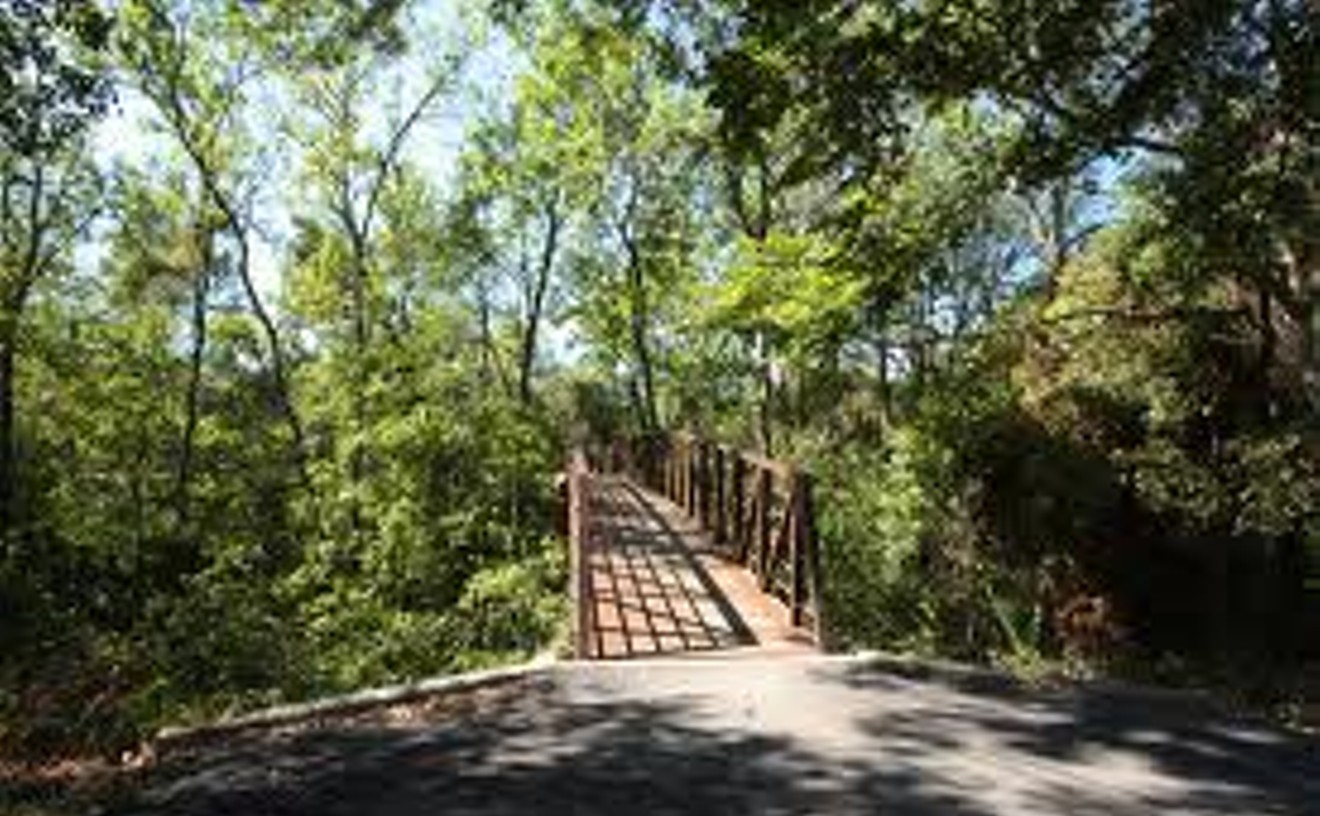 Way out west amid the tract developments, strip malls and freeways of Houston's upper-middle-class suburbia is this hidden sliver of primordial bayou land, where you can wind back the geologic clock to the Cenozoic Era. On a typical hike or bike trip through the park's 12 miles of Buffalo Bayou-hugging trails, you'll see startled turtles sliding down sandy banks and water snakes lazing through slowly flowing, surprisingly pristine waters; you'll also hear the occasional splash as the bayou ripples when a hungry garfish surfaces to chomp an unlucky bug. The 500 acres of lush undergrowth are interspersed with occasional clearings; in one, you'll find a sundial where your own shadow will tell you the time. Even that primitive mode of timekeeping seems positively high-tech after an hour or two deep in the jungles of the park.