Happily, Houston finds itself with an abundance of good film festivals. Some focus on indie films, others on cinema from a certain country or region, still others on the stories of a particular ethnic group or sect. But only the Cinema Arts Festival Houston hones in on films by and about artists. The 2009 fest, Cinema Arts' inaugural edition, included appearances by Hollywood insiders such as Tilda Swinton and Guillermo Arriaga. It had a line-up of films in an immense range of periods and genres, from the 1924 silent film classic Peter Pan accompanied by a new score to the then yet-to-be-released Precious: Based on the Novel Push by Sapphire. More than 6,000 viewers flocked to various screening venues around town, including Discovery Green, the Museum of Fine Arts, Houston and a portable screening room just large enough for ten or so people.

Just last year Houston drinkers were relegated to driving or walking from bar to bar if they wanted to hop from joints off Washington Avenue or Midtown. In the past year, jitney services have popped up in town to haul the thirsty and party-hungry to far-flung places when walking or driving is either a chore or ill-advised for legal reasons. Cops don't really like it when you drink ten shots of Patrón and take to the wheel of your SUV. The biggest jitney to make the scene is the Washington Wave, which quickly became the leader in the nascent industry. Each bus in its fleet comes decked out with a sound system, a DVD player, and free water, candy and condoms if you are thirsty, hungry or plan to get lucky.

This year, Free Press Summerfest went from experiment to full-fledged event. Despite no favors from the weather — punishing heat and humidity both days; an hour-long Biblical downpour the second — thousands upon thousands of people packed Eleanor Tinsley Park for a festival that delivered a lot more than headliner The Flaming Lips' candy-coated sunshine psychedelia. Low ticket prices, including a VIP package affordable enough for ramen-eaters, plenty of food and water, and a booking philosophy that would be adventurous for even Coachella or Lollapalooza (we can't think of another festival that would welcome Houston noise-wreckers Rusted Shut with open arms, for example), added up to a musical experience that was both tourist-friendly and singularly Houston. Now facing a future in which its success may well force it to relocate outside Eleanor Tinsley, Summerfest has accomplished in two short years what many thought was impossible: It has put Houston firmly on the major music-festival map.

Houston's youngest audience members get an unmatched introduction to the magic of live performances at the Children's Hilltop Theatre Festival at Miller Outdoor Theatre. Produced by the Express Children's Theatre, the annual festival includes several performances over a four-day period. The 2010 event included the musicals Three Billy Goats Gruff, The True Story of the Tortoise and the Hare and Jack and the Beanstalk, as well as a bilingual version of The Three Little Pigs. Each was a twist on the familiar tale. (The three pigs, for example, are Scouts earning a merit badge, with the Wolf as the scoutmaster who'll be judging their work.) 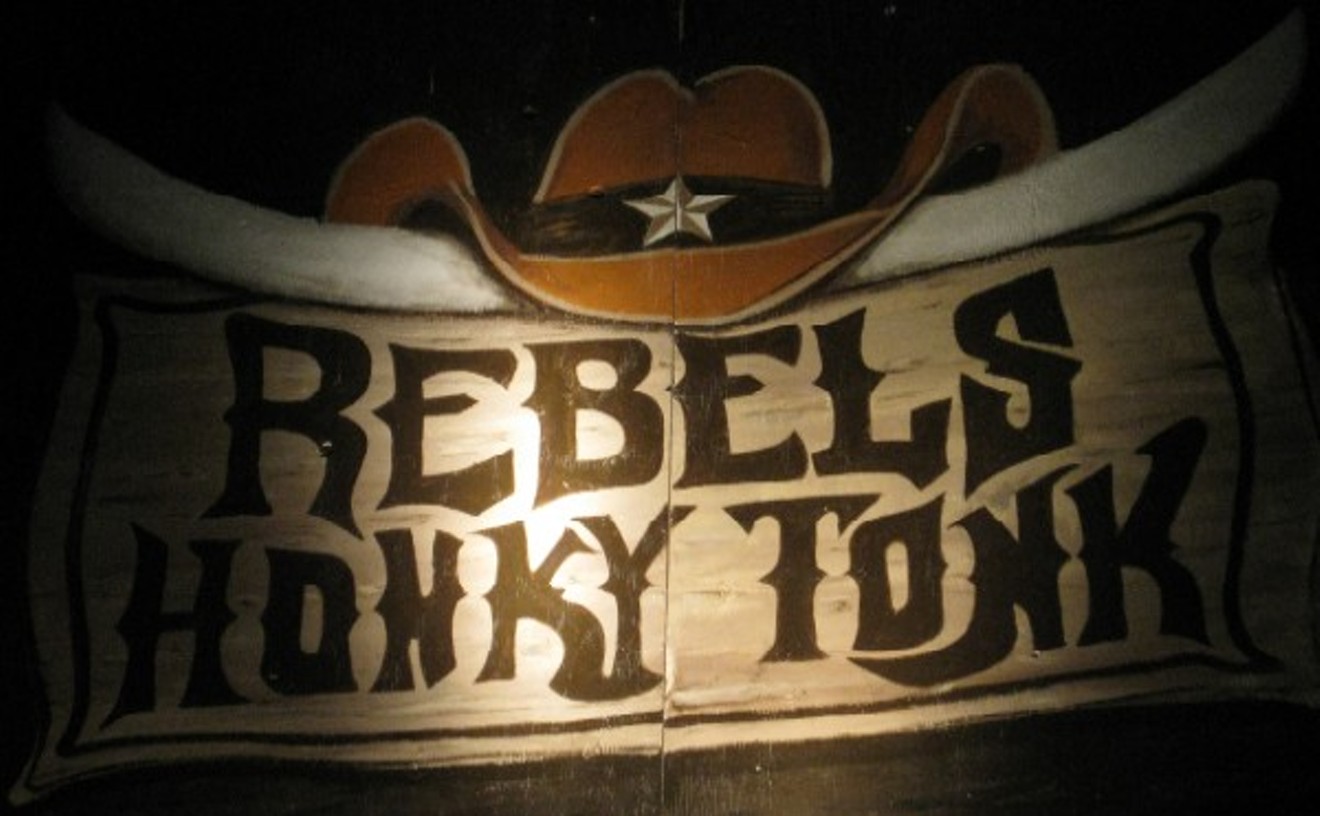 Washington Avenue has gotten plenty of grief this year, not only from the Houston Press but from other detractors who cry foul at all the glitzy trappings and seemingly nightly amateur drinkers. But there are a couple places where we find ourselves at home along the avenue: indie-club Walter's and Rebels Honky Tonk, where the country and western motif is upped to almost a garish degree. You don't have to wait until RodeoHouston season or go outside the Loop to see gals in skintight Rockies and guys in cowboy hats swilling beer — just head to Rebels. It's also one of the few bars on the strip that knows how to pour a stiff drink. Be sure to hit up the bar on one of its cheap you-call-it nights. Call in sick in advance. 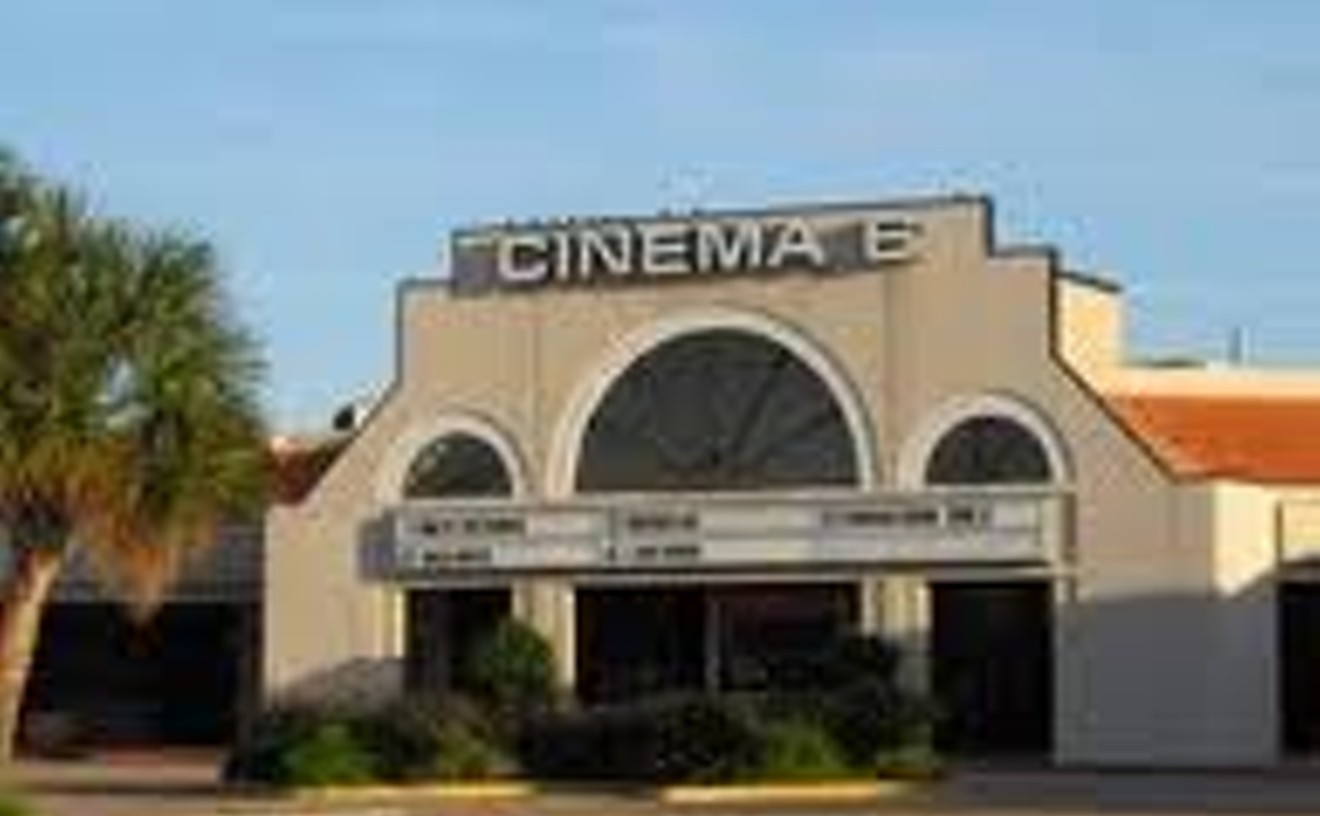 Not taking anything away from our friends at the Museum of Fine Arts, Houston, who host regular screenings of foreign-language films, this year's Best of Houston® nod goes to Bollywood Cinema 6. This theater deserves the recognition not only because of the constantly changing line-up of ready-for-Hollywood Bollywood films, but also because of non-Westernized titles that are frequently screened, such as retellings of ancient Hindu myths, as well as romantic comedies filled not only with love but with mysticism and magic.

Since they got together this year, Robert Ellis & the Boys have reminded us of the country music we listened to growing up in Houston. From their Wednesday-night residencies to their stray gigs across the city, Ellis and his all-star Montrose band gave hipsters and oldsters a reason to want to learn how to two-step. Soon tattooed Buds and Sissys were popping up all over Westheimer and all points surrounding. With their mix of originals and covers ranging from Garth Brooks to Waylon Jennings to Townes Van Zandt, Ellis and the Boys also give the uninitiated a crash course in country music history. 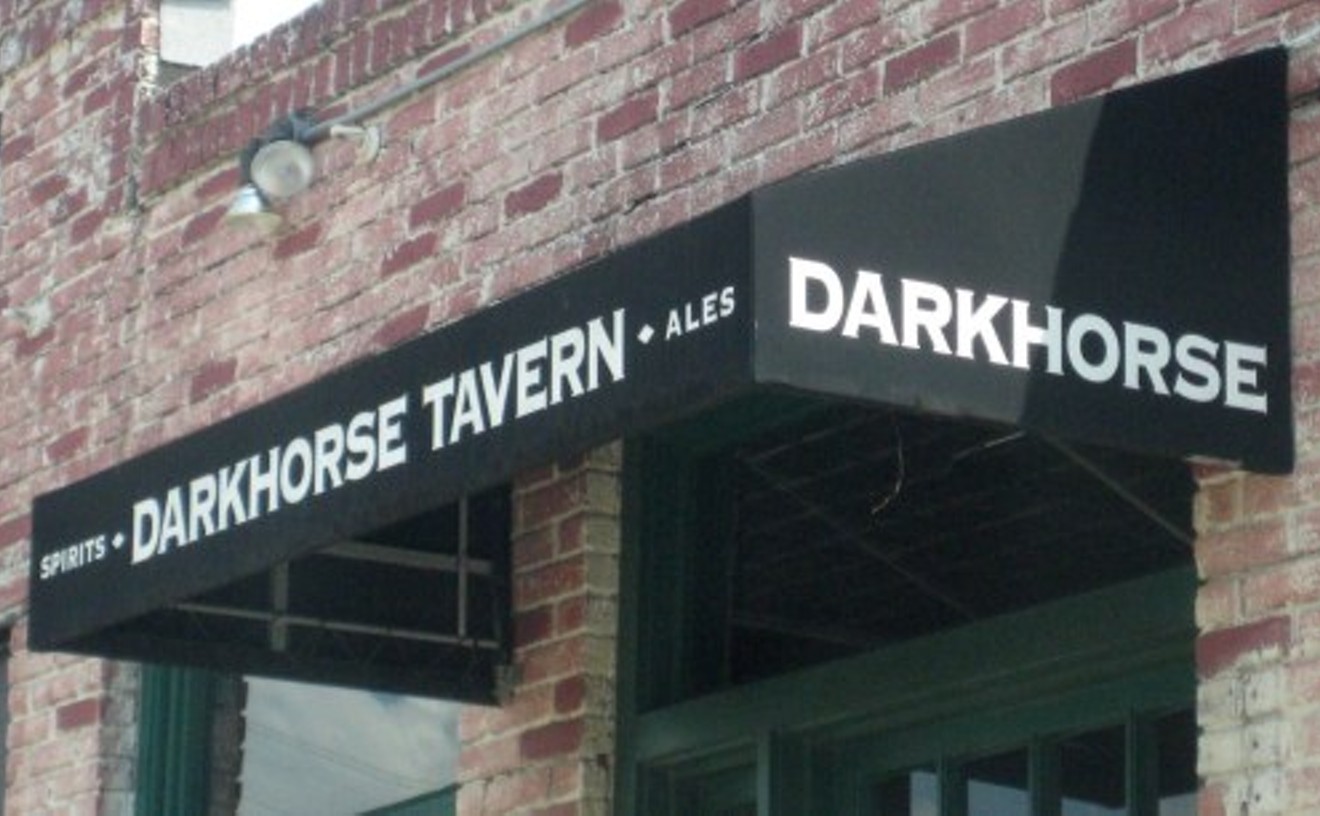 The bathrooms of Washington Avenue's Darkhorse Tavern are museums to both male and female sexual exploits and skullduggery, if only in literary form. It's as if they were decorated by a schizophrenic with a bag of axes to grind. The girls' room looks like an NC-17 burn book from the movie Mean Girls, while the boys' scrawls take shots at the sexual mores of Kermit the Frog and longtime gal pal Miss Piggy, among other characters. One thing is clear: Whoever Katie is, she really needs to back up off Trent. 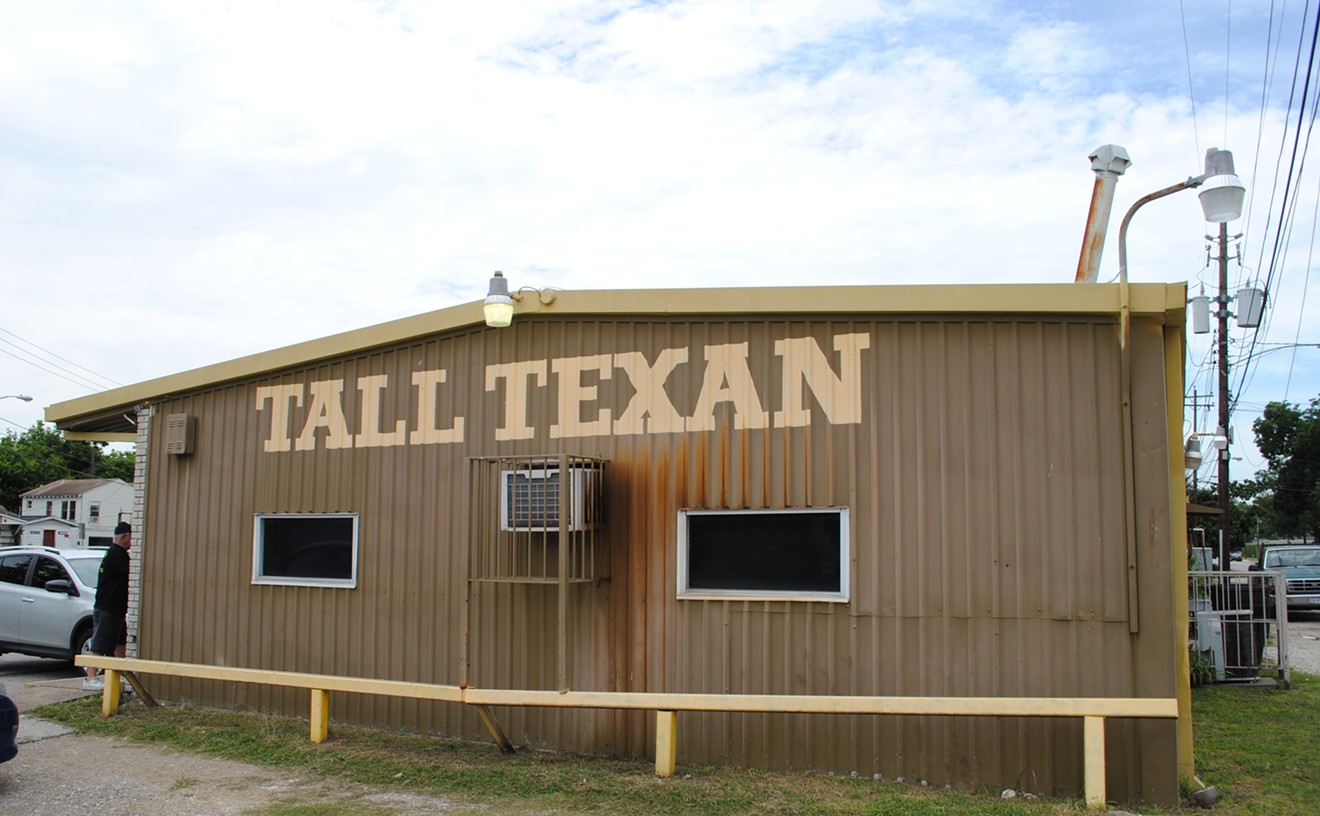 Given the generally negative connotations surrounding the word "redneck," we hesitate to hang the tag on any establishment where we enjoy raising a glass and would like to continue doing so. But if there's any bar within the Loop we imagine wouldn't mind the designation — sorry, Blanco's — it's got to be the Tall Texan. The sea of pickup trucks parked outside the Airline Drive institution is a pretty major tip-off, as are the abundance of Texana and Houston sports paraphernalia on the walls and a jukebox Country Legends 97.1 can't match on its best day. All that and the dirt-cheap goblets of Lone Star make the Tall Texan a beer joint in the best possible sense, so if that equals "redneck bar," somebody call Jeff Foxworthy.

Unexpectedly and improbably, Robert Ellis & the Boys became the talk of Houston's Inner Loop hipster crowd over their yearlong Whiskey Wednesdays residency at Mango's, impressing the two-stepping twentysomethings with a long list of honky-tonk standards from Willie Nelson, Merle Haggard, Ray Price, Johnny Paycheck, Dwight Yoakam and many more. But the band also slipped in originals from time to time, and one of the best is "Comin' Home," a fast-paced train-beat shuffle that expresses the swelling sense of pride both Houston musicians and music fans feel about their city. Ellis says the song, written as he was returning from a gig in Austin, may be included on the album he is working on now for a fall or winter release. It's his way of debunking some of the myths surrounding the so-called "Live Music Capital of the World": "I like Austin fine enough," he says, "but I'm there enough that on the way home, I'm just thinking about how I'd rather be in Houston than Austin." He's not alone.