Started in 2008 by Manish Puri and his wife Ashmin Nisha, Nisha's Quick-N-Ezee Indian Food is always one of the most popular stalls at Houston's farmers' markets. They accommodate meat-eaters, vegetarians and vegans alike and use local ingredients whenever possible. Though you cannot find Nisha's deliciously authentic Indian dishes in any store or restaurant, it is always worth a trip to the farmers' market to bring home a sack of vegetable samosas and tubs of cilantro peanut chutney and chicken tikka masala. Luckily, they try to hit all the local markets every week, upping your chance of taking home some of the best Indian food in the city. 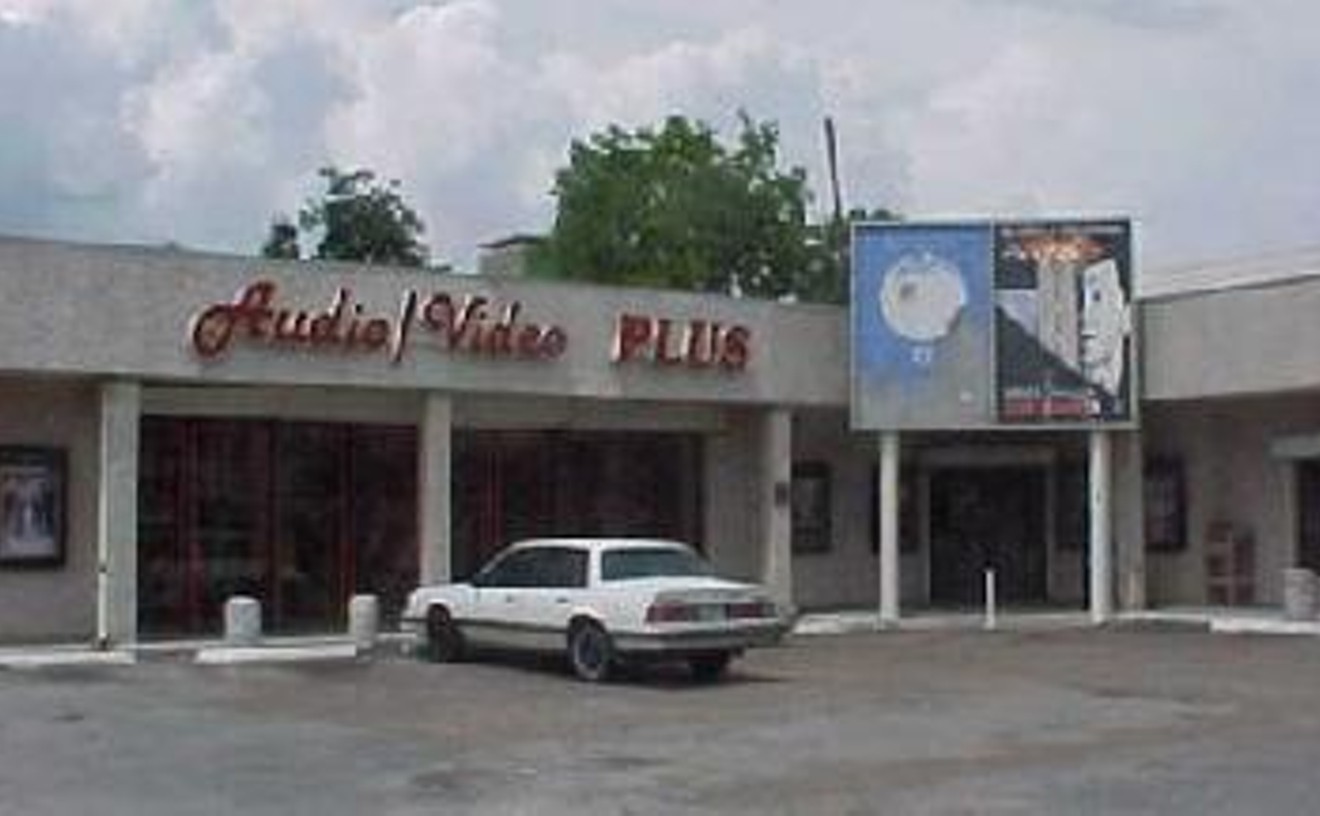 The best approach to finding a movie at Montrose's Audio Video Plus is simply browsing, because browsing here is better than Google.

Take the Burt Reynolds section. We were marveling at these gems from the '70s and '80s when there, staring us in the face, was Reynolds. Pictured from the waist up, he was dressed in what appeared to be a velour track suit that was certainly unzipped to mid-chest.

We were in heaven. The glimpse of Reynolds's tan body came from the cover of 1981's Paternity. Tagline: "He wants you to have his baby."

We figured that would be impossible to top, until we stumbled upon the Chuck Norris section. We're not talking Delta Force or Missing in Action Norris, we're talking Forest Warrior, a mid-'90s flick that stars Norris as John McKenna, "a spiritual being who is able to transform into bear, wolf or eagle."

And the only thing that made all this better was that both movies, like all movie rentals at Audio Video Plus, were old-school, VHS format.

This store has to be one of the most unique places in Houston, and it's managed to survive relatively unchanged since it opened in the mid-'80s. It's even more impressive considering that the movie rental industry, when real estate is concerned, is crumbling across the country.

You'd be hard-pressed to find someone who doesn't know of a neighborhood Blockbuster that has shut down in recent years, and when Houston's Hollywood Video called it quits, the city was left with few options.

But Audio Video Plus hasn't flinched.

"I think [our customers] like the niche," says Shawna Nutley, who has worked at the store for about a year and a half. "It's just all the odd things you never thought you'd be able to find. All the weird documentaries or television shows from the '80s. When I saw we had Jem and the Holograms, I was like, 'Yes.'"

There's bound to be more than a few odd finds, since the store offers 70,000 different titles, according to Nutley. There's a small side room filled with DVDs, but those are to buy, not rent.

Almost everything at the store is a bit odd. When you're browsing at Audio Video Plus, for example, you carry a little piece of paper and pencil, marking down the identifying numbers of the movies you want. Then the clerk disappears to the massive storage room to get your tapes.

There's not even a modern-day computer in the store, only an electronic database machine that was probably used during the Cold War to store Soviet coordinates.

You can also find evidence of how the VHS industry has changed, because a lot of the movie boxes still carry the original price tags. Class of Nuke 'Em High 3, for example, was marked down from $99.98 to $14.98.

"I think anytime there isn't Blockbuster in the name, people have that idea," she says.

Audio Video Plus is open seven days a week, and they have a special of $5 for five rentals, which you get to keep for a week. Just make sure you have a VCR.